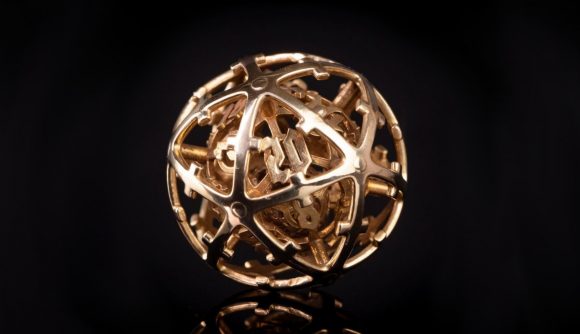 It’s no surprise that fans of Dungeons and Dragons often have other equally potent passions. Sometimes, when the DnD gods allow, the stars align, and these other hobbies or professions will find a way to cross over with the world’s biggest tabletop RPG. Such is the case for Reddit user Blake Giorgio, also known as FallacyDog, who has used their background in audio engineering and three years of dice-making experience to craft a tuned set of musical DnD dice.

“Using frequency analysis, each die has been given a unique pitch”, Giorgio said on Reddit. The die will be cast in brass, plated brass, or 14 karat gold, and each has an internal core that rings like a bell. “The dice are 3D printed lost wax investment cast and are precision printed on layers just several microns thick”, Giorgio added. For anyone who is unfamiliar with 3D printers, this means each die is a single piece of metal cast using a wax model.

Giorgio will launch a Kickstarter for the ‘Arcana Core Musical Dice’ on June 14. “I wanted this project to redefine and raise the bar for what a luxury set of dice truly looks like,” Giorgio told Wargamer, “while also offering them at a price point similar to what a high end set of resin dice would go currently for”.

While the crowdfunding page isn’t live yet, the creator has shared plenty of campaign details with both Wargamer and Reddit. A single D20 will reportedly cost $35 / £27.91, and a full dice set will be $175 / £139.61. Plated gold dice will cost double this price.

“The dice designs are finished and ready for production, outside of the required efficiency of scale we’ll see once we have a count on orders”, Giorgio told Wargamer. “The only changes in the design that I’m still working on are some minor adjustments to the pitch of some of the dice so there are more pleasant combinations of notes possible.”

“If it weren’t for the amazing help with 3D printing / machining and some technicals from my friend Summit Dice, setting up this project would essentially be a solo endeavour”, they explained. “I’ve done all of the videography, editing, music composition and production for the trailer, glamour shots, hand finishing, and 3D design up to this point and will be hammering out the rest of the trailer this coming week!”

Giorgio estimates international shipping will cost around $20 / £15.95, plus any standard import duties for your specific country. “They should ship way before December as well,” they said on Reddit. However, Giorgio sets the official shipping deadline at a year – just in case “things go viral”.

“Before the start of this year, I was working as an audiovisual designer for an indie game studio”, Giorgio told Wargamer, “but I pivoted to working on this project full-time at the beginning of February”. “The original concept for these dice was drafted deep in the rural Costa Rican mountains”, they added. “I spent several months in seclusion working on them so I could focus free of any distraction.”

Several Reddit users had questions about the balance and readability of the metal dice. However, Giorgio is certain the balance will be “effectively perfect”. “The 3D model is perfectly balanced and we’re printing on layers only a few microns thick”, they told Reddit. “There’s also a bit of a double pendulum effect with the free-floating second weight in it, so that likely adds an extra element of randomness.”

As for readability, Giorgio suggests a patina and selective polish – but there’s no guarantee they’ll be adding this to the dice themselves. “It will likely be a stretch goal,” Giorgio says to one Redditor. “It’s fun to do, but it adds up quickly if you need to do a lot of them, and I want to be sure the volume is there to justify it.”Giorgio also has plenty of other stretch goals planned for the Kickstarter campaign. “One stretch goal I’ve considered is doing a separate set of entirely d6s for Bards (which conveniently have the cleanest timbre) where each one is a note in the scale”, they told Reddit. They’ve also considered 28mm and 35mm dice as “XL stretch goals”.

For even more 20-sided fun, be sure to check out our DnD dice guide. We’ve also got plenty of other D&D advice, from classes to races and more.