Hello, I’m the developer of WOTA (Wolves of the Atlantic), a upcoming World War II submarine simulation series for iOS and tvOS (still in development.) Desktop versions (Mac, PC, Linux) will be released after the mobile version. Other platforms might be supported later.

All WOTA Simulation Games will offer you a full scale subsim with basically everything you would expect from this genre. This means a serious simulation with an intuitive and easy to learn user interface. UI and the entire graphics artwork will be optimized for each of the platforms (not simply a slightly enhanced port of the mobile graphics for the desktop versions). The games will offer different settings of realism by limiting the possible views (no outside views in full realism) and accuracy of the AI.

A word about game play: games need to be playable by people without the need to study the game for days or weeks. Realism may sound like a terrible thing for some gamers, but it does not mean you will need to manually handle all those parts of the submarine which usually require a large crew. The job of the player is the job of the skipper. Realism comes into play as the game play itself: the behavior of all vessels, weapons and of the simulated crew (all this requires a decent simulation under the hood). Of course you could for example manually play around with each of the ballast tanks if you want to do that but there is no need to do it manually to play the game.


A quick overview of the upcoming games:

– WOTA: U 96: this mobile subsim offers a faster game play without reducing realism. You’ll find more info about the game play on the website: http://www.wolves-of-the-atlantic.com

– WOTA: Wolves of the Atlantic: for iOS/tvOS and later Mac/PC/Linux, a much more complex simulation with different submarines, more types of ships and more features. This will be the main release of WOTA.


Some of the features of “WOTA: Wolves of the Atlantic“:

Development – General progress made since 2014:

– Visually WOTA reached near desktop quality on mobile now.
– Implemented my custom high performant global illumination system.
– New custom physically based shaders with real time IBL (Image based lighting).
– Improved the water shader with transparency and refractions.
– Water color based on weather and lighting.
– Water shader works now for higher altitudes of the camera - up to 10,000 meters.
– New realistic underwater environment with correct visibility, crepuscular rays and caustics.
– New FX, fire, smoke, depth charge explosions, large water splashes and new ship trails.
– New dynamic clouds with correct lighting. Weather FX like thunderbolts (this all works with real time IBL).
– All new 3D model of the Type VII U-Boat “U 96“.
– Highly detailed 3D interor of the command room.
– New buoyancy and underwater physics system.
– Correct hydrodynamic simulation - automatically matches historic Type VII test data by 90% in all situations.
– Correct simulation of the diesel engines and propulsion. (which means for you: realistic acceleration and fuel consumption).
– Correct simulation of all ballast tanks (including damage) based on newest scientific research for real world computer controlled ballast tanks. (my head is still smoking)
– Physically correct aircraft simulation based on the blade element theory
– Aircraft AI which really flies the aircraft with a virtual joystick. (This funny stuff would in theory even work with RC models if they are fitted with sensors)
– New skin shader for the new characters.
– School of fish implemented into the underwater environment.
– Tons of stuff and optimizations under the hood.


Some iOS screenshots (you'll find more on the website) (The untextured geometry of the command room. This screenshot was taken with the Maya Editor) 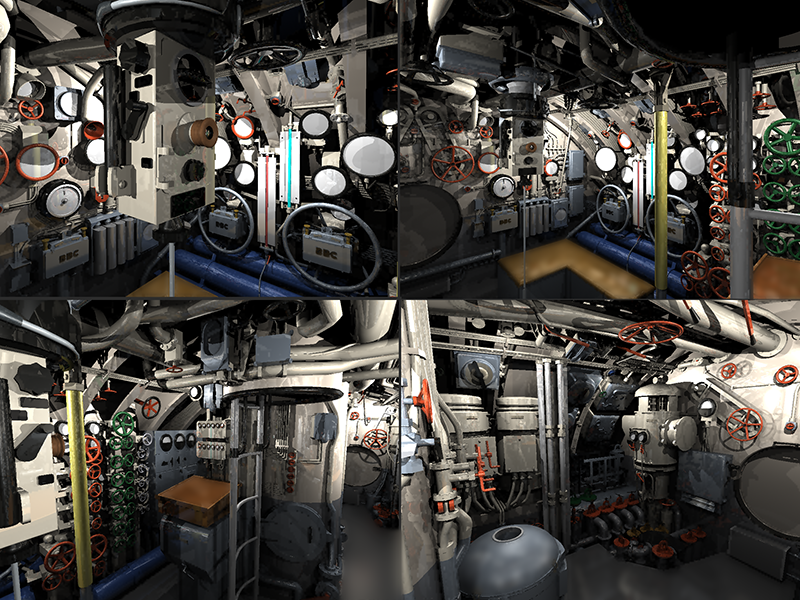 In this video you can see the new shaders and the global illumination system running. It demonstrates the visible effect it has on everything when the time of day / light changes. It also shows the improved water shader with refractions/transparency. It is a good example of the high quality of the game graphics. The Unity Engine later has introduced a global illumination system too but my own global illumination system is fully custom and offers a freaking fast performance on all devices because it is optimized for the needs of WOTA only.
(filmed from iPad screen… the rotating boat was just a good way to show how the shaders work)
– https://www.youtube.com/watch?v=1IAL_24bfb4 This is an example of the influence of different cloud settings on the vessels and the water (Boat lifted out of the water for this test):
– https://youtu.be/UBbarikVnuA An example of the FX – a depth charge explosion:
– https://youtu.be/iBz1gCMb2qM Heavy seas and the new clouds (please note: the boat uses the obsolete buoyancy system in this video):
– https://youtu.be/28y_UB-9xEs Example of the AI for aircraft and gunners - please note: this was made in a ugly environment for testing purposes – it does not represent ingame graphics!
– https://www.youtube.com/watch?v=kujnOkUNRIs This old video has visually nothing to do with WOTA, but it shows my custom flight dynamics model (which is based on the blade element theory, so it is comparable to what state-of-the-art flight simulators are using) in a very simple scene – please skip to 1:20 to see the visualization of the flight model. A nice example of the realism under the hood - you won't see AI aircrafts flying totally unrealisticallyin WOTA (like you usually see in the other naval sims) because the logic of the AI uses a virtual stick to control a correctly simulated aircraft:
– https://www.youtube.com/watch?v=Z-_yhdGtbRk You can already preview some of the artwork of the game (interior and a submerged scene) on your own iOS device by downloading the App "WOTA: U-Boat Compass"
– https://wolves-of-the-atlantic.com/apps ... mpass.html

Re: WOTA: Wolves of the Atlantic (U-Boat simulation) 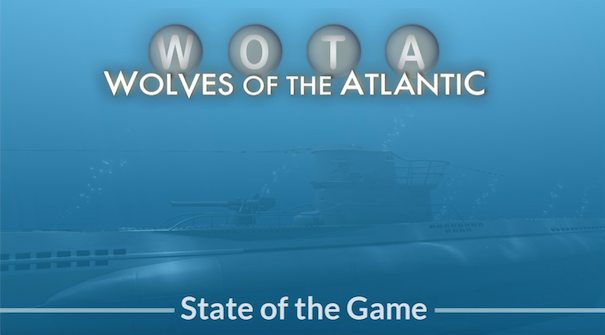 I’ve wrote a long newsletter about the current state of the game and why the development needs such a long time:
https://www.wolves-of-the-atlantic.com/ ... _the_game/

Users browsing this forum: No registered users and 3 guests