Whoa! Let me say that again: whoa! Oliver Keppelmuller’s long awaited American Civil War project (the term ‘game’ just doesn’t do it justice) is now due for an August 21, 2020 early access release on Steam. However, some lucky folks (that would be me) have been playing the beta for at least a couple of weeks now, and – while the software is still buggier than an ant colony – we could truly be looking at the definitive computer game on the American Civil War.

There are 2 ½ reasons for this. The first is the way the game redefines the concept of ‘real time strategy’, or RTS. Say the term ‘RTS’ and most people think of the giant tactical ancient battles from the Total War series or the click-fests of Command & Conquer or Ultimate General Civil War. Draw a box around 10 formations from different commands, point them in the right direction and let them go. Not so in Grand Tactician: The Civil War (GTCW).

Second is the reality that GTCW is not one game but two, and I am serious about this. It has both a strategic game (national and campaign level) and a tactical game (battle level) in the same package. Yes, some other games like Total War have both tactical and strategic play, but one is usually subordinate to the other. For example, Field of Glory II does have a strategic campaign system, but it’s obvious it exists only to set up tactical battles. In GTCW, however, both portions are so comprehensive and complex as to count as separate games.

Finally, the graphics have to be some of the best and most evocative of this era I have ever seen. 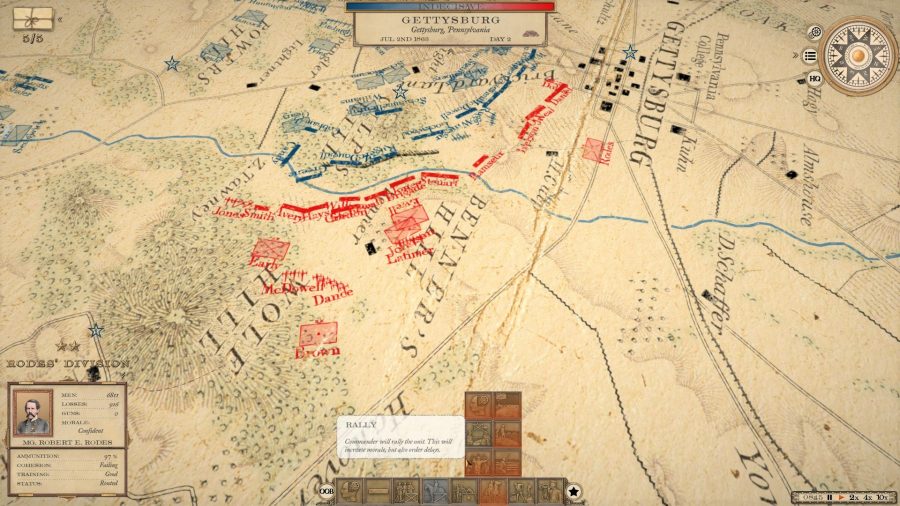 Yes, the reenactment videos by LionHeart FilmWorks are spiffy, but the use of colorized photography from the war (especially the leaders), etched brass or tin icons, period cartography, rustic western design, hell, even cursive text in dispatches, really exudes War Between the States ambiance. On the battlefield the troops are quite animated, some loading, firing standing, firing kneeling and gun fire actually displays sparks from the rifles and cannon as well as billows of smoke.

Being a beta, however, meant that I have no access to any detailed players manual. What is provided for the strategic game is superficial, and nothing is provided for battles. Thus, I am still plodding through two campaigns and four different battles learning as I go using a “point, click and let’s see what happens” advanced education methodology. I have yet to finish any, though I will say the Battle of Bentonville scenario is by far my favorite. I have learned a lot and this is a ‘first look’, so let’s investigate some particulars. 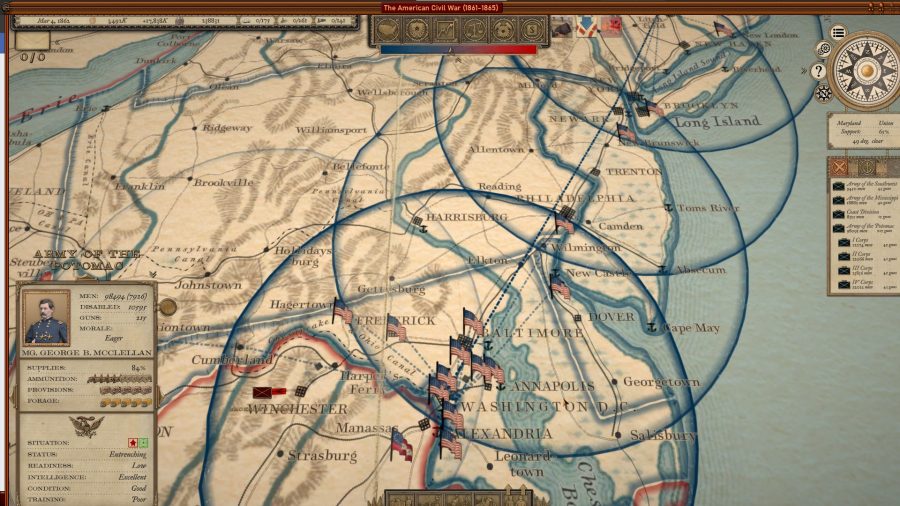 The Strategic or Campaign Game

This part of GTCW is played in ‘no kidding’ real time or up to 10x thereof, and the player assumes the role of either the president of the United States or the president of the Confederacy. The overall objective is simple; destroy the morale of the other side’s population, though midterm objectives like institute a blockade of all Confederate ports is part of the process getting there. Cracking your enemy’s morale can be accomplished in many ways, to include military victories on land and sea, inflicting casualties or wrecking the economy.

Obviously, the other side is trying to do the same to you and here GTCW has some especially nuanced chrome to make the process uniquely ACW. For example, morale might decrease because of increased taxes, something common in most games of this ilk, but how about a state’s morale taking a hit if one of their politically appointed generals is sent home in disgrace or troops from the same state take the brunt of casualties in all the fighting. If national morale drops too low, France and Britain may intervene on behalf of the Confederacy, or Spain on behalf of the Union should the South threaten certain colonies.

Getting this done requires the player to approve a number of national level policies, such as mass industrialization, and then underneath those policies initiate one or more of several acts to implement the decision. What policies and acts are chosen will influence the players ability to sustain the war effort politically, socially and economically, and thus maintain acceptable levels of national morale. 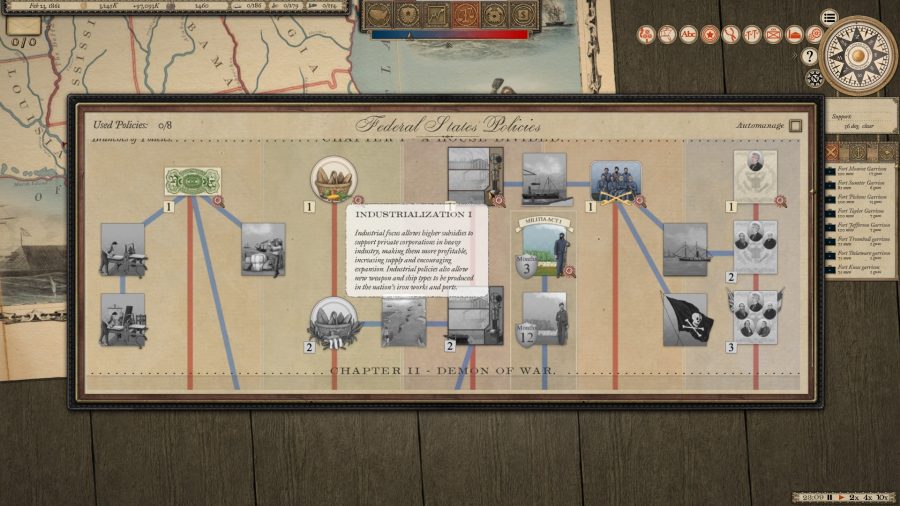 From that point forward the player generally makes finance decisions concerning acquiring revenue through taxes and tariffs, and then using the money to subsidize the war effort via categories such as Agriculture or Transportation. The nitty-gritty of how these funds are used to produce what and what the overall national balance sheet looks like is auto-managed by the AI. The player can see what is happening but has to return to the Finance screen to readjust revenue and subsidy schemes if he wants something to change. Or if you are lazy like me, you can let the AI manage the whole thing. You can also raise and manage armies and navies, transfer units between them, promote and dismiss officers and then move the whole shebang to engage and destroy the enemy. However, this is done via orders from the War Department in DC or Richmond, and there is a time delay imposed, which will be a lot shorter if you construct railroads and telegraph lines (brilliant!).

Brother against brother: These are the best Civil War games

These two additions, along with feuding generals, define ACW to many, and while most Europeans thought the war a conflict between two armed mobs, these aspects did not go unnoticed. Just ask the Austrians after Koniggratz. Battles may be auto-resolved, but if large enough and on land the game will allow the option to play the engagement out on a tactical battlefield. I’ve not reached that point yet, but it does beg the question that if European intervention is triggered, could we see British and French engaging the Army of the Potomac in brigade and battery level combat amidst the trees of Virginia? Given General Keppelmuller just updated GTCW with the 1863 Campaign module – literally, as I was typing this – I am a bit closer to finding out. 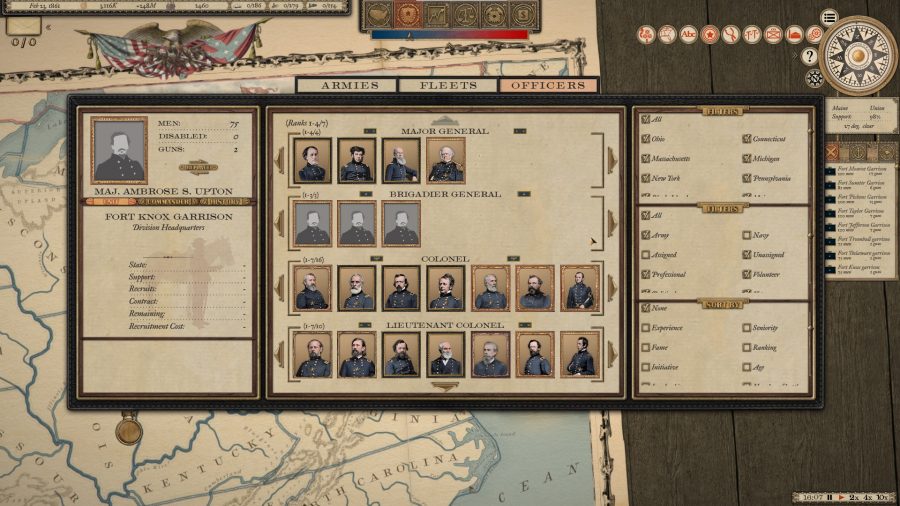 The Tactical or Battle Game

GTCW comes with 11 historical battles and these mimic what you’ll be doing with similar incidents from the strategic module. Like the latter, the game is played in real time or up to 10 x and the battleground not only includes the historical engagement area but a vast amount of real estate surrounding it. This makes each battle sort of a min-campaign in its own right. Said terrain looks like a period battle map zoomed out, but zoomed in becomes a 3D landscape, one of the most accurate I’ve seen. I live near these spots and actually spent part of my military career as a US Army War College certified Staff Ride Instructor for several, so I know of what I speak. Don’t ask me why, but the leaf-based ground cover for the forests really hooked it for me.

Units include commanders, artillery battalions (maybe two batteries) as well as cavalry and infantry brigades. As previously noted, we are talking RTS here, but in a neat twist, the RTS is heavily chain of command based. The player is the army commander and as such can assign routes of march and engagement parameters to his units. In a neat bit of historical doctrine, the command to execute can be keyed to a signal or a specific time in the game, say 10:00 am. But once the play button is clicked, these forces go on autopilot until someone changes their instructions.

If the unit happens to be inside the radius where bugle calls can be heard (also brilliant), change can be very quick. Otherwise a staff officer must ride from the army commander down the chain of command in question for the order to be received, understood and obeyed. This obviously takes time, and I do wonder if there is any upcoming option to see one of these messengers shot. 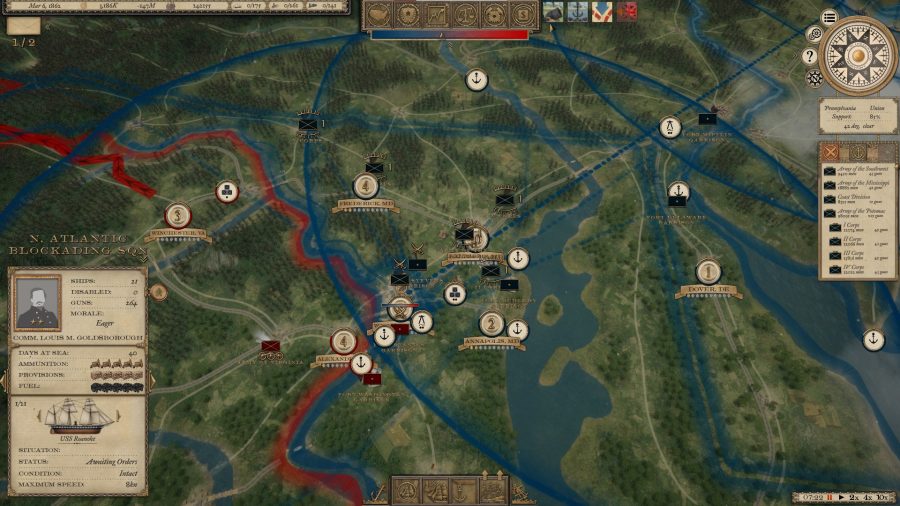 An additional delay might be imposed if the subordinate commander is feuding with his boss, and while the player may assign an Initiative option to a general, this risks the latter commander doing something whacko. Given Braxton Bragg was at Bentonville in 1865, I’ve learned to be cautious using this perk as the Confederates in this tussle.

Across the Atlantic: Try our list of the best Napoleonic games

Each historical battle also comes with a clever AI option. The AI can act historically, or it can be given relatively free reign. Why one would ever choose the former can be summed up in one word – Antietam. Lee gave battle at Antietam though heavily outnumbered because he knew his adversary, George McClellan. He knew that while an organizational genius, ‘Little Mac’ was a cautious, blithering idiot as a battlefield captain. If McClellan was competent, the battle of Antietam would never have been fought as Lee would never have risked it. 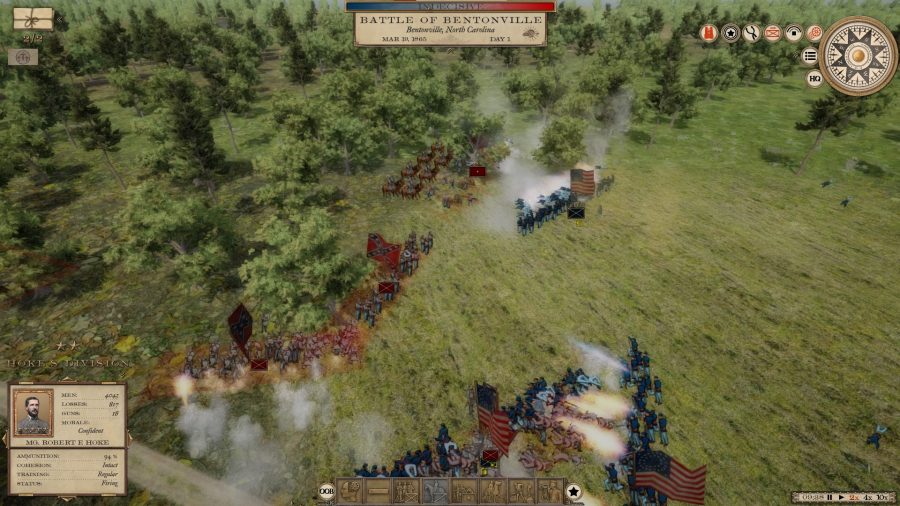 Either way, however, I found the battles challenging, and very hard to master. The reason was not that game play was particularly hard but was so counter-intuitive to what I have played in other RTS games that the learning curve seemed difficult. Nevertheless, if you like realism, this is really gonna float your ironclad.

Again, remember, this is a Beta version, so there are bound to be some negatives in both design philosophy and coding. I thought the casualty rates in the historical battles were way too high and bayonet duels far too frequent. As in many a war before this one, 95% of the time either attacker or defender would give way and vacate the premises before trying to stab or cleave someone.

The AI is just a little ineffectual in some situations

Likewise, I’ve seen troops fire through their comrades with nary any detriment, couriers pass through enemy formations to deliver messages (hey, it was a fast horse) and the general milling around with gunners, for example, swabbing absolutely nothing when historical formations or movement can’t be duplicated by the software. And while I do like the representation of depth by having the artillery limbers or mounts for dismounted cavalry present and visible, using the latter as a screen for retreating troopers is just a little much. I also thought the AI was just a bit ineffectual in some situations.

But if these things get fixed, then expect me to be ‘fastest with the mostest’ as regards my hard-earned shekels, plastic or PayPal. I’ll definitely be playing a lot of what I got til then, so look for a more formal review, maybe two.

Grand Tactician: The Civil War Releases into Steam Early Access on August 21, 2020. At the time of writing it’s due to remain there until at least the end of the year.

{"schema":{"page":{"content":{"headline":"Grand Tactician: The Civil War is shaping up to be the definitive American Civil War strategy game","type":"feature","category":"grand-tactician-the-civil-war"},"user":{"loginstatus":false},"game":{"publisher":"Oliver Keppelm\u00fcller","genre":"Wargame","title":"Grand Tactician: The Civil War","genres":["Wargame","Strategy","Historical","Digital"]}}}}