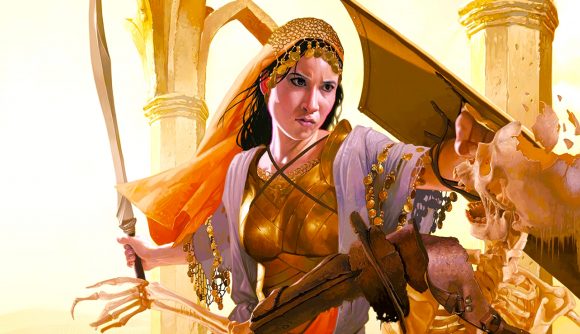 D&D and Magic: The Gathering publisher Wizards of the Coast has just become a corporate ambassador for Women in Games, a not-for-profit organisation which – according to its website – aims to “to build a fair, equal, and safe environment empowering girls and women in the global gaming ecosystem”. Women in Games announced the partnership with Wizards on its website on Thursday, and Wizards will join a list of ambassadors that includes video game companies like 2K Games, Rockstar, and Ubisoft.

“We are delighted that Wizards of the Coast has joined our Corporate Ambassador Programme”, says Women in Games CEO Marie-Claire Isaaman. “Its franchises are known and loved around the world, and it is particularly heartening to see that a global company like Wizards of the Coast is showing such a significant commitment to promoting and appointing women within its leadership team.”

Isaaman adds that Women in Games is looking forward to Wizards working towards a “joint goal of creating a fair playing field for women throughout the games industry”. It’s not yet clear how Wizards plans to get involved with the organisation’s work, but Women in Games’ website says the programme “exists to provide studios and companies with opportunities to engage with multiple initiatives, activities, events, research opportunities, awards, and showcasing talent.”

The announcement comes just a few days into International Women’s Month, as well as a month after Hasbro appointed ex-Microsoft executive Cynthia W. Williams as President of Wizards of the Coast – replacing Chris Cocks, who is now Hasbro’s CEO.

We’re thrilled to partner with Women in Games to drive forward our shared vision and values and work together to increase representation within the global games industryhttps://t.co/ZZUG5YMWf1

“The Women in Games organisation is playing an essential role in shaping the present and future diversity of the global games industry and we’re incredibly proud for Wizards of the Coast to become a Corporate Ambassador and drive forward our shared vision and values”, Williams tells Women in Games. “As a global game developer and publisher, we’re committed to prioritising a diverse culture that values, respects and empowers all our teams and is also reflected throughout our games.”

According to Women in Games, women made up only 22% of the games industry workforce in 2020 – a particularly small number given that around 50% of gamers are women. When looking at tabletop gaming specifically, the statistics seem to slim down even further. An often-cited study by Tonya Pobuda, in the academic journal Analog Games Studies, suggested that, in 2018, only 24% of tabletop gamers were women, and 2.4% of the top 200 board games of the time were designed by white women – women of other races didn’t rank at all. Including Cynthia Williams, women currently make up one third of Hasbro’s top executive team.

Some of the Corporate Ambassadors Women in Games has partnered with have recently made headlines for accusations of sexual misconduct against women – most notably, a wave of sexual harassment accusations at Ubisoft in 2020.

2022 is looking like a good year for Wizards, though – in fact, Hasbro announced that 2021 was its “best year ever”. If you’re after more info on women in the wizarding world, Daredevil actor Deborah Ann Woll will soon be DMing a new D&D series.