For those of you who read my stuff, you know I’m a big fan of Phillipe Thibaut’s computer wargame designs. With his new SGS design studio via Avalon Digital, last July he dropped Winter War on the Russo-Finnish War of 1939, and now follows this success with Afrika Korps, another game with a distinctly Wars Across the World-on-steroids pedigree.

It is truly the best example of how games can accurately simulate high-level military operations using a common set of core rules across multiple timeframes and environments, with only a minimal amount of tweaking. It means that if you learn one game, you can easily play the rest – and so it is with Winter War and Afrika Korps.

Which is another way of saying that I am not going to discuss detailed game play mechanisms – like turn sequence and the like – because I’ve been there, done that. Instead what follows is a discussion on what changed, what hasn’t and whether the game lives up to the history it replicates. 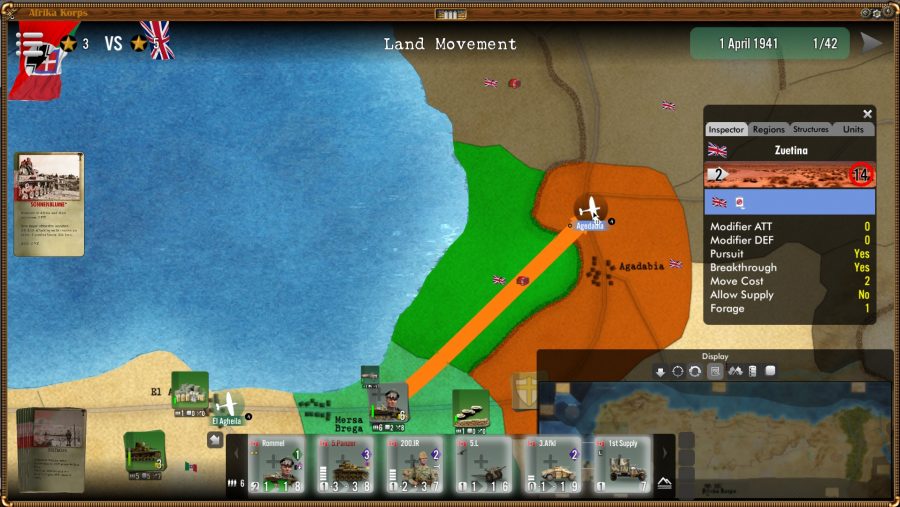 IF IT AIN’T BROKE

I’ve never been a fan of area movement games, but yet here we are. I think the reason for this is Afrika Korps is another example of a product line that does the concept right. The advantages of areas remain, yet the size and deployment thereof on the game map is such that physical battle lines can still be formed, complete with flanks and the like. It’s like the areas are mini hexes of wildly varying shapes and locations. It really works and works better than any other area movement game I’ve seen.

The games are designed to be played in under three hours

The game also retains its spectacular visuals using a superb color palette for unit and leader counters with just the right amount of information displayed, neatly and logically laid out for examination. The Vae Victis style representation of soldiers and equipment is a marvel of historical accuracy, down to unit names (i.e., the Italian 3d StormoRegia Aeronautica) and accurate rendering of fighting machines (the Fiat CR 42 Falco biplane fighter). Not only does it just look “military” but it exudes a feeling that the designer has really put his heart and soul into historical research to make sure his game is accurate.

Finally, the games are still designed to be played in under three hours. Afrika Korps has six scenarios – Operazione E, Afrika Korps 1941, Battle Ax 1941, Crusader 1941, Afrika Korps 1942 and El Alamein 1942. Of these, Afrika Korps 41 consists of 42 turns, but still only requires two- and one-half hours to play. Considering my wife is a sports nut, and I am not, the marriage saving potential is endless. She can watch Monday Night Football while I kick some Commonwealth tail, all in the space of a single evening. 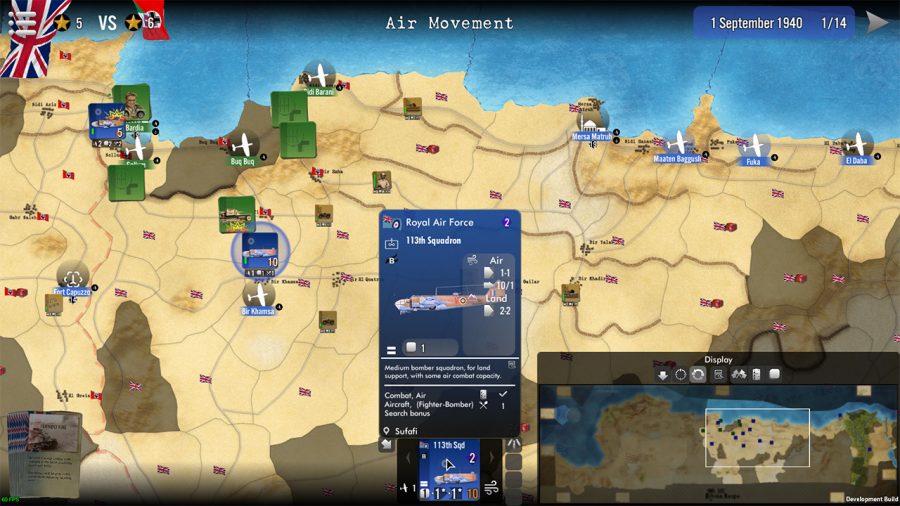 In fact, one could say there are no changes at all between Winter War and Afrika Korps, because all the new stuff really isn’t new. As before there are excellent tutorials alongside a detailed, well-illustrated manual divided into a core rules section, and then a second section to discuss specifics for both general game play and functions unique to that particular product. What I’ve found is that everything for Afrika Korps was actually contained in the game manual for Winter War, but simply not used when fighting in snow hip deep to a moose.

It’s as though the game is fully complete, simply allowing the designer to cherry pick or exclude specific aspects to match each unique campaign. New and improved ‘special’ rules for this contest only seem few and far between. It also means you should really review the manual’s core rules pages unless you’d like a really nasty surprise your first time out in Rommel’s Greif armored command car. 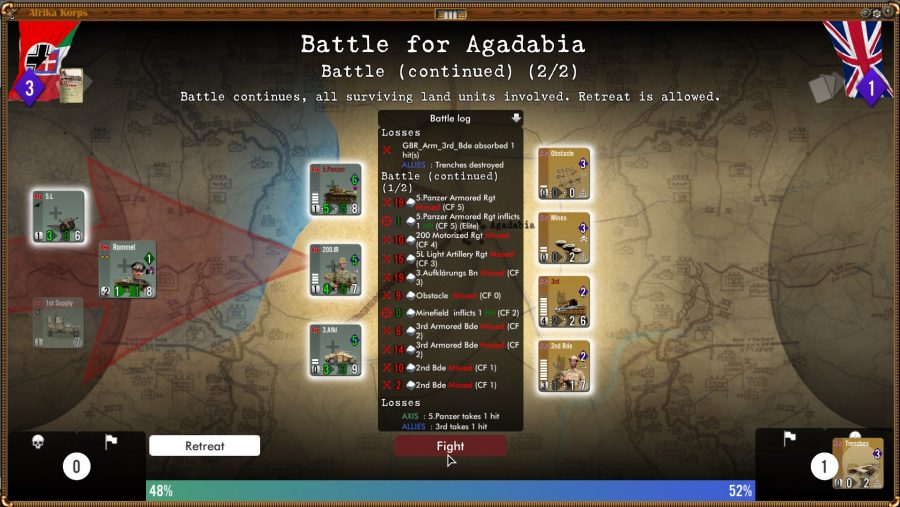 Why not fix it?

Some of the biggest changes in Afrika Korps are simply a readjustment of numbers and come in two flavors, the first being the terrain, both in terms of how big the campaign area is and also the type of turf therein. Captain Obvious, right? Here we have smouldering desert sands and not the snowy forests of Lapland. It’s pretty much flat and sandy as far as the eye can see, or at least until the Suez Canal.

The second big change are the combat units themselves. No, there aren’t any odd formations running around with brand new numerical codes. Instead you have a counter mix that has a lot more air power and mechanised units galore, as well as mega artillery. Plus, these brigades, regiments and squadrons are a lot meaner and a lot faster for the most part.

By this I mean aircraft units have a longer range and land units on wheels and tracks move a lot farther each turn. Now consider each turn equals two weeks as opposed to one week in Winter War. When you fuse that fact with fast moving units across absolutely featureless, flat terrain and you can imagine a Blitzkrieg paradise. 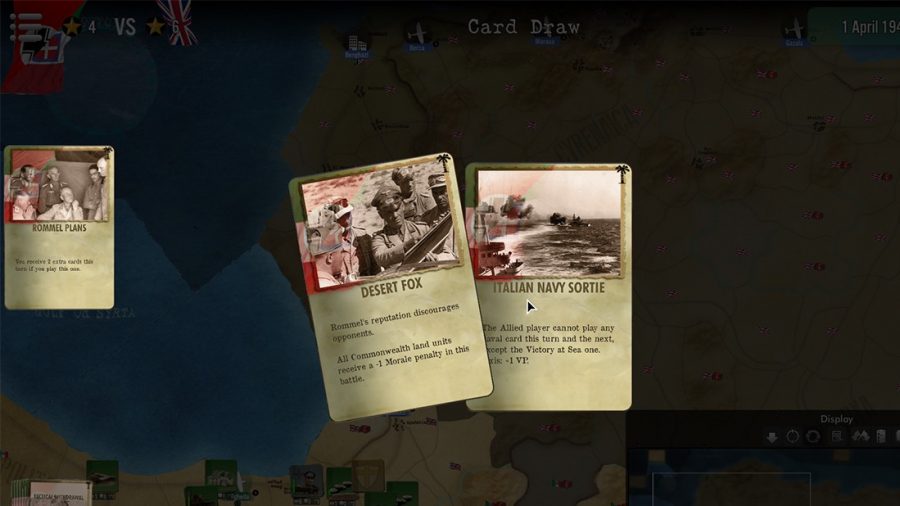 This is amplified yet again by a couple of subtle changes to the sequence of play and combat routine. Gone are the Ambushes of the Finnish ski troops, although there is a Recon combat phase where armored cars and light tanks can take a free shot at the opposition unless he also has recon on hand. More dramatic, however, is the way Breakthrough works. There are a lot more units on the digital game board that can participate now, and if a Breakthrough occurs, not only can the victor can actually move into an adjacent region to fight again, but if successful, conduct a second Breakthrough into a second adjacent area and fight for a third time. So if you have your calculator app on your smartphone handy, then yup, it’s possible for some units to fight thrice and gobble up two extra regions in one turn.

And then… Monsieur Thibaut’s throws a monkey wrench called Supply into the finely tuned combat engine. On the surface logistics doesn’t work any differently in Afrika Korps than it does in Winter War. To ensure you’re getting enough beans and bullets (not to mention water for the Italians’ pasta), you have to be within three regions of a supply depot, or within range of a string of supply units that ultimately connects with a depot three regions away. If not, bad things happen as units have their ability to move, attack and defend degraded, with the situation worsening every turn a unit stays Out of Supply. But the kicker is that there is also a Survival die roll each turn to see if the formation takes a Combat Hit. 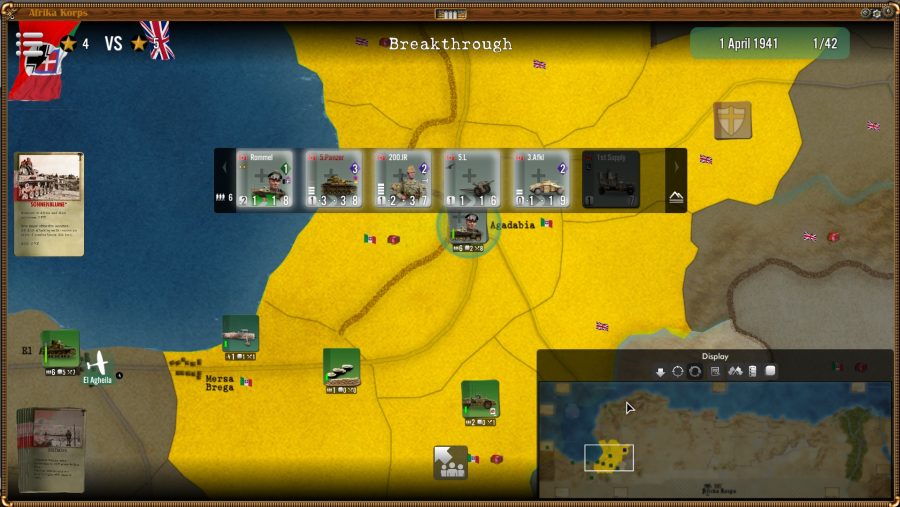 One of the positive die modifiers is the Forage Value of the region where the lads currently sit. In Winter War you could see Forage Values of 6 quite regularly and I think I remember one for 20. In Afrika Korps, if you are on the Nile, no problem, but if you are in any of the bazillion regions that are primarily sand, then the Forage value is zilch, nada, nyet, nichts, zip, a big fat zero (as in “0”). Or you could also expend one of your ‘never have enough’ supply transport units to take care of forces in a region for a single turn, and with Forage Values of zero all over the place, the temptation to do so and lose them forever is magnified.

Get it now? Read page 69 of the manual real close – an index would be nice BTW – and you will discover what makes Afrika Korps tick as a wargame. Here the player is presented the opportunity to be that Irresistible Force of fast moving, sweeping Panzer columns, only to meet the Immovable Object of no gas in the tanks or food in your soldiers’ bellies. Now toss in some of the random event cards (you’re taking my 5th Panzer to do what, where, right now?) and the game becomes a faithful, but fun, representation of the decision-making nightmare fighting in North Africa entailed. To quote Dirty Harry: “ya feel lucky, punk?”

Midnight at the Oasis

At 19.99 Euros, this game is one of my must-buys. With an easy to learn game system so flexible it could simulate a war between felines and gerbils, and a playing time of two and a half hours max, you’d think historical realism would be an afterthought. But it isn’t and that is what makes this product line one of the most popular around. Four games this past weekend confirmed that once again.