A brand new trading card game based on historical characters is looking to make waves with a new Kickstarter campaign, and judging from the preview, it’s already aiming high. Arch Legends combines revered and reviled figures from a multitude of cultural backgrounds and timelines into a complex tactical card game where your only goal is to dominate.

For fans of historical strategy games, those with an appreciation for history, and anyone who loves to get stuck into a long campaign, Arch Legends may be just the thing to bring you over to tabletop trading card games. In fact, the game’s booster packs include QR coded cards that lead to further historical information about each Legend, and their personal philosophy if you weren’t already familiar with them.

Under the simple 5×5 battlefield format lies a challenging game. Arch Legends requires players to develop and nurture an understanding of various factors that can influence a battle. Each battlefield is covered with random terrain types before the game begins, ensuring a varied and unexpected environment every time. Along the way, you will reduce your opponent’s Morale, and attempt to win the war, not just the battle.

The game sets the scene with a Legend and Support deck for each player, as well as a Base Card. The Legend deck, as you might expect, is packed with ten of history’s most memorable figures, while the Support deck includes Tactic, Skill, Chaos, and Equipment cards. These dictate your every move, and players can build these decks prior to the game however they see fit. The Base Card is your home, providing unique ability boosts to your Legends. These can be anywhere from Camelot to the Great Wall of China. The battlefield cards are then drawn, laying the foundations of each move, and each players’ dice is set to a total of 10 Morale points. 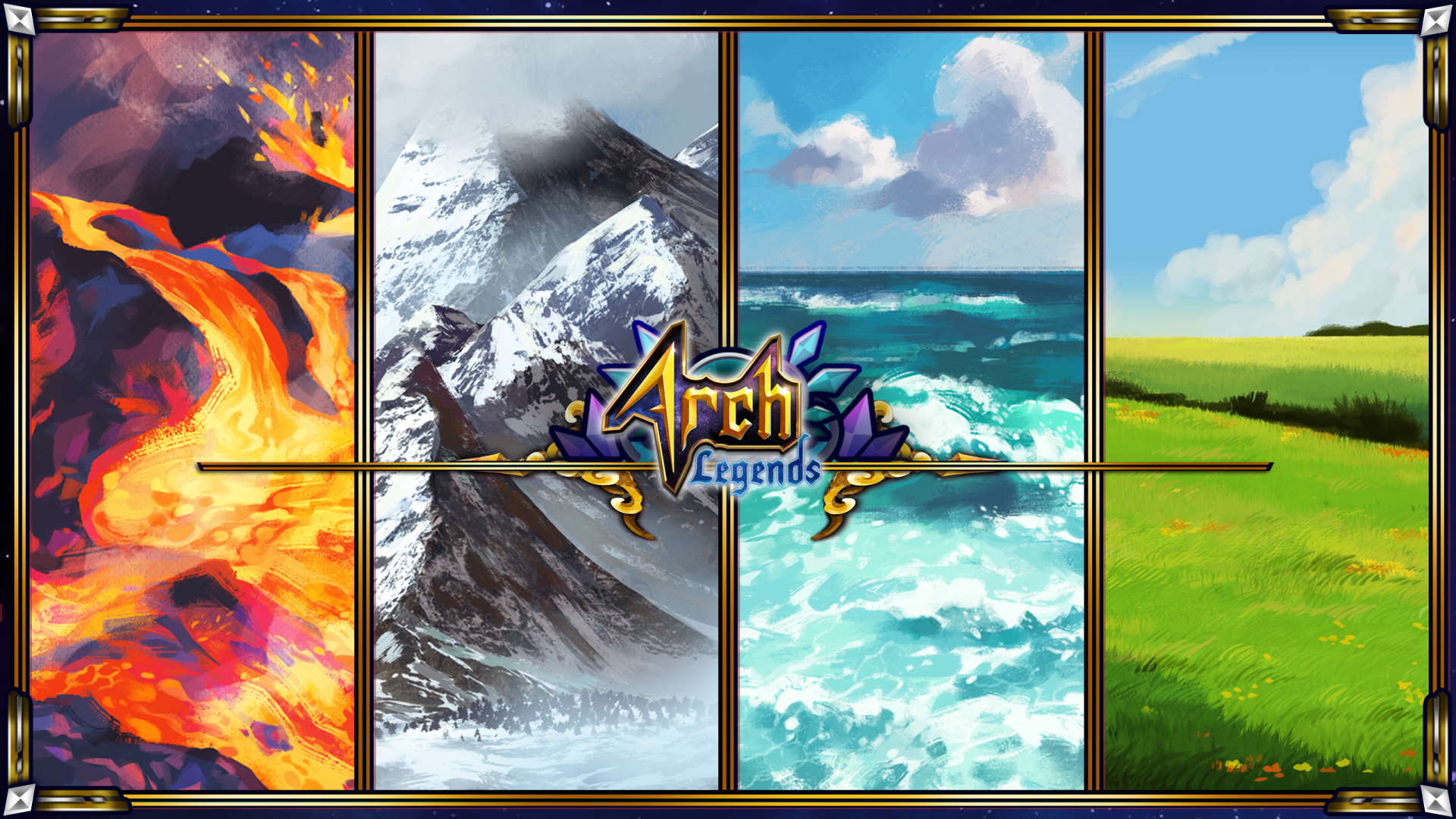 Drawing the top three Legends from your deck starts the game, but even at this stage the old adage is true – the bigger they come, the harder they fall. Powerful Legends may aid you well in battle, but losing them will decimate your Morale faster than you might expect. Should your Morale hit zero, then the game will be over. Unlike many of these games, there is no need for resources, but you will accumulate Knowledge and Zeal from your Legends, allowing you to activate special powers for a devastating finish.

Keeping a close eye on attack range, which is indicated on each card, is crucial. It will show how many cards can lie between your Legend and an opponent in order to inflict the most harm. Damage caused or taken in combat is permanent, but can be healed with certain abilities. Each Legend comes with their own abilities, based on their real-world counterpart’s personal strengths. Whether your Legend is a warrior or a sage, it will take careful planning and attention to detail to win a battle without sustaining too much damage.

Arch Legends cards are varied in art style, and incorporate many different cultures and ideologies. Some of the Legends are historical figures, while some are taken from myth and legend such as Sir Lancelot, Thor, and Aladdin. The cards are grouped into classes, like Fey, Knight, Samurai, and Prince, allowing players to see at a glance the kinds of special abilities their unique deck might be able to use. 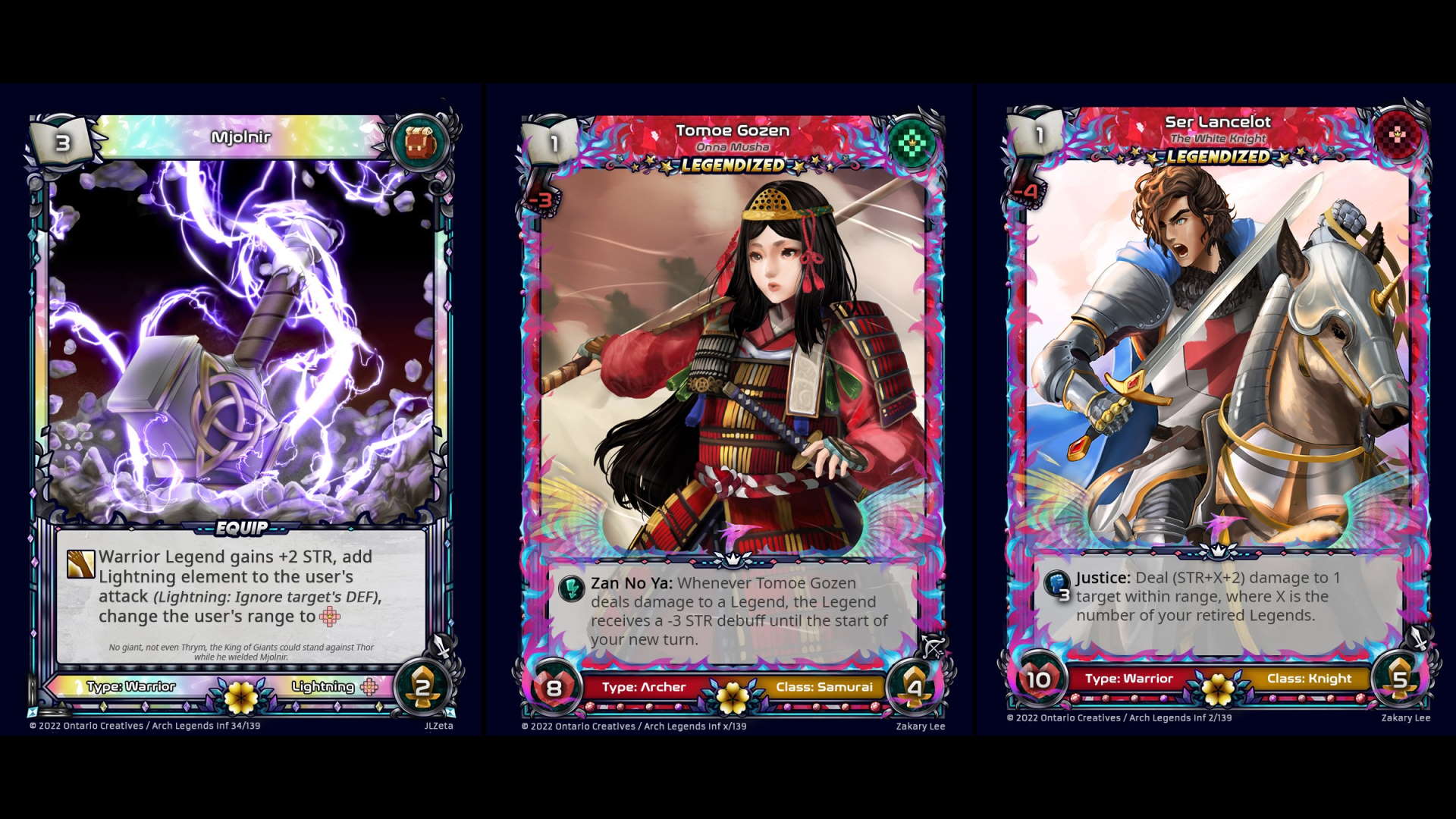 Decks of Support cards enhance these abilities even further, with access to Equipment like Thor’s lightning hammer Mjolnir, and an invisibility cloak. From there, players can pick Skill cards that boost their damage and add elements like fire, poison, and ice to their attack. Tactic cards keep the game interesting, allowing players to perform supportive tasks like healing Morale, drawing new cards, or restoring HP. Lastly, Chaos cards can be employed to add a twist to each game, cutting down your opponent without a battle, or nullifying their Tactic cards before they’ve had a chance to heal.

Each player will need to be on high alert throughout the game, as every move could be counteracted, and you never know what your opponent is hiding from you. Over time, the team behind Arch Legends hopes to release multiple packs to allow for varied and truly challenging gameplay.

For those who like to trudge knee-deep in lore, Arch Legends has you covered. Their website includes a novel, which explains the circumstances that surround the game itself. Not only are these historical heavyweights battling each other, but it turns out there’s a reason for it after all. The story brings a sci-fi element to the proceedings, and will continue to be expanded as the game takes off.

The Kickstarter campaign is live now, where prospective fans will get a taste of new card packs, exclusive releases, and the future of the trading card game itself. Arch Legends is also available to play on Tabletop Simulator via Steam.