Armored Brigade is a game that makes you feel smart. Beneath the dense web of unit stats and a bevy of modern military hardware lies a title that really makes you feel like god’s gift to tactics (at least when your battle plan is going smoothly). A large part of this lies in the game’s straightforward and relatively intuitive gameplay, which provides for a level of accessibility not usually seen in games with things like variable wind conditions.

Now, this isn’t to say mastering the game is a walk in the park, as it’ll take modern war neophytes some time before they come to grips with the title’s 500+ units and assortment of European maps to use them on.

And speaking of maps, Armored Brigade is a triumph in this department. When generating a scenario, the player is given the choice of four maps, all save one (the training map) located in Germany or Finland. However, to say there are four maps without qualification would be disingenuous, as each of them is enormous and your playing time will always be spent on a small fraction of each of these vast tracts.

This lends itself to one of the game’s greatest strengths: player customization. 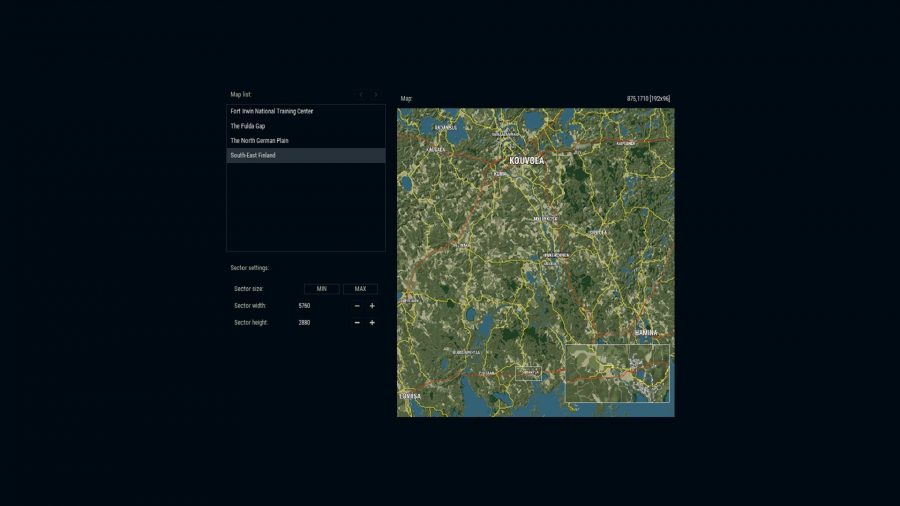 Want to simulate a 1977 urban brawl between East and West Germany? Easy as zooming in on Bispingen and picking the era and belligerents. There is a slew of options for scenario generation, ranging from the type of battle (e.g.: meeting engagement) to the time of year—which is great because this mode is where the bulk of gameplay is found. As of launch, Armored Brigade comes with 15 pre-made scenarios, each showcasing a different aspect of the game. (Since release, DLC expansions have added more content) As there is no multiplayer, once the stock scenarios have been exhausted, the title’s mileage hinges on the mission generator.

Being without multiplayer, sustained enjoyment is also very contingent on the enemy A.I., which so far seems competent. In my 15+ hours with the game, the A.I. was human-like and consistent in its utilizing support and reconnaissance units in their intended roles, and its attacking with combined arms forces. Still, on more than one occasion while I was on defence, the A.I. sent units towards my side of the map in a piecemeal fashion, resulting in an unsatisfying win that left me scratching my head as to why the normally tactful A.I. threw its playbook out the window.

Contrasted with the enemy A.I. is the friendly A.I., which you will spend much of your time delegating orders to. Given the potential enormity of both the forces and map in a given scenario, Armored Brigade would bog down into micromanagement Hell if not for this feature (which isn’t to say that those micro-inclined can’t position their ATGM team into just the right spot, but given modern warfare’s tempo and need for reactivity, this management style isn’t always the most conducive for your pixeltruppen’s wellbeing). Giving orders to a formation consists of formulating the right mixture of general commands, such as ‘advance’ or ‘scout’, and unit ‘Standard Operating Procedures’ before queuing them up for success. 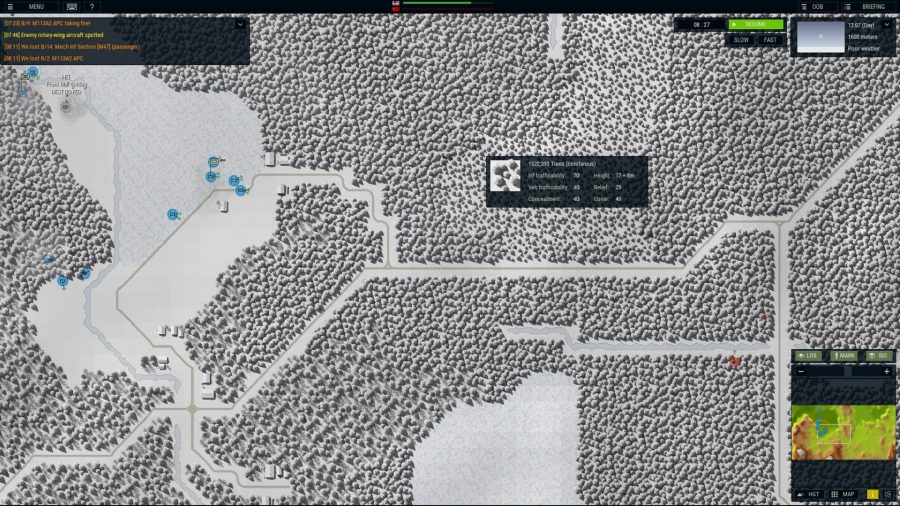 This queuing of orders is important given the game’s onerous (in the best way) command and control rules. Once play is underway, giving a unit or formation an order takes time, which generally prevents flying-by-the-seat-of-your-pants, and rewards planning. Additionally, the time it takes for a command to be acted upon by your troops is influenced by a variety of factors, such as nationality, unit distance from HQ, and information sharing with another unit in the same formation.

War (What is it good for?) These are the best Vietnam War games

This aspect of the game also encourages giving orders to formations, as an order is almost always faster received when given to a company or platoon as opposed to a single solitary unit. Armored Brigade’s depiction of command and control leads to many memorable gameplay moments: blanching in horror as you realize your hapless platoon is moving into a recently discovered ambush and there’s no way to tell them in time, biting your nails as you watch the order-received timer go down when your own unit(s) are waiting in ambush. 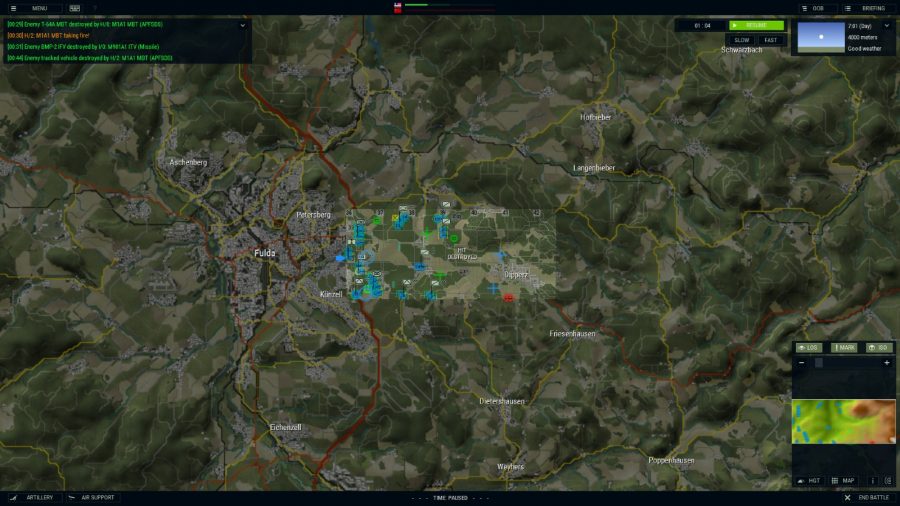 Graphically, it gets the job done—which isn’t a slight by any means, as it’s quite a hefty job in the first place, depicting close to forty years of military kit from seven different nation across four detailed maps. Given the title’s emphasis on giving commands to formations, you will be spending a lot of time giving orders to unit icons from your vantage point in the sky, strategizing around the maps’ largest and most perspicuous features (such as “that big forest over there” or “that bunch of buildings on the bottom of the map”). Zooming in however, reveals Armored Brigade’s spritely, workmanlike aesthetic, which strongly evokes genre stablemate Close Combat’s artistic sensibilities.

Gameplay is host to a cocophony of authentic machine gun, explosion and aircraft effects

This similarity of appearance is quite literally surface-level, though, as Armored Brigade applies the same level of grognard pedantry to its topography as it does to its fighting units. Elevation, cover, concealment, and traffickability for both leg and wheel units are all things accounted for vis-a-vis the terrain you’ll be fighting on, all things the A.I. does a handy job of exploiting. I was pleasantly surprised when, during a custom scenario, I watched one of my units reposition itself into a defilade, taking full advantage of a nearby hill-crest without my prompting.

The audio design also cuts the mustard, and once contact is made, gameplay is host to a cacophony of authentic-sounding machine gun fire, explosions, and the occasional loud cracking of one of the title’s many attack aircraft passing over the map and delivering its payload. The game’s sound effects become extra immersive when the “player unit” option is selected before the match. Doing so allows you to designate one of your units as “you” during set-up, and if this unit dies, the match ends regardless of how things are getting on at the moment of your demise. You also inherit your unit’s hearing radius, and can only perceive sounds within range, leading to a chilling experience as you can hear the faint crackling of gunfire on the other side of the map. 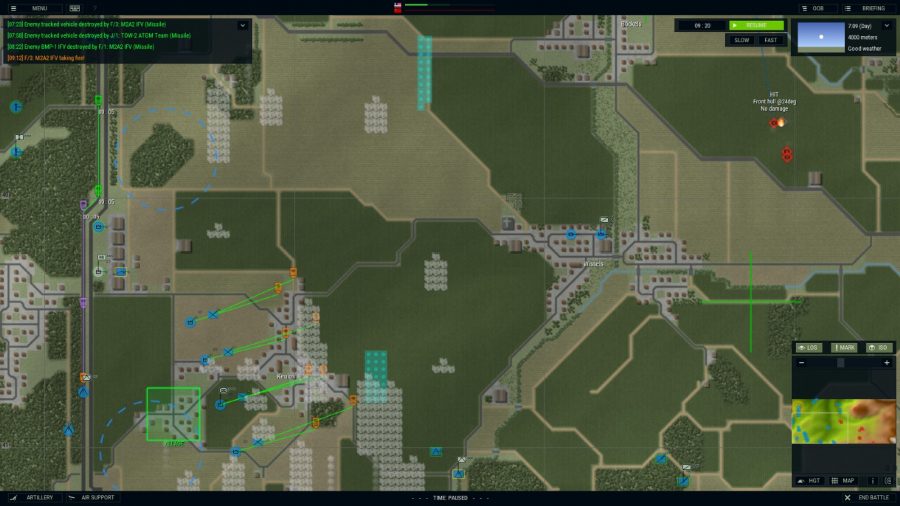 Your avatar also never suffers from command delay and can be used to spot for artillery and air support, making your presence on the battlefield a huge boon should your pre-plotted artillery coordinates be rendered suddenly irrelevant by the vagaries of battle. Even when playing with this feature turned on, though, you are still presented with the game’s normal camera and the near perfect and instantaneous information that entails.

Compared with other wargames’ attempts at embodied commanding—such as the solipsistic ‘Headquarter in the Saddle’ perspective found in the Scourge of War series—the player unit is more of a fun little extra that doesn’t do much to radically change gameplay or the way the map is perceived.

All at sea: Discover the best naval games around

Armored Brigade is overflowing with wargaming goodness, chief of which is the huge assortment of units and environments to use them in, followed by the joy of ordering around formations of autonomous and relatively self-sufficient units.

Better yet, this is a relatively accessible game, and anyone with even a passing familiarity with either RTS or traditional wargames will be able to come to grips with the essential mechanics in no-time. 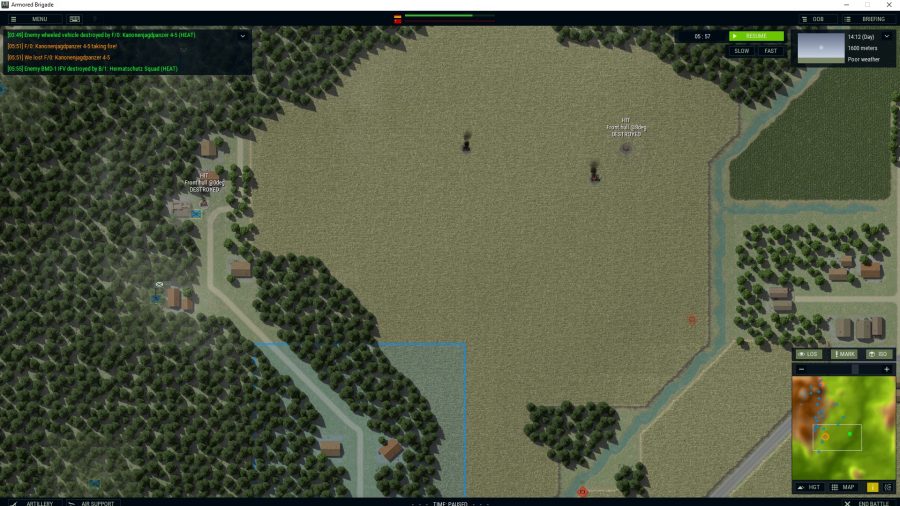 It does bear repeating, though, that Armored Brigade should be approached as a single-player sandbox. Once the title’s 15 missions have been run through, the game’s longevity largely depends on how enamoured you are with the scenario generator. It also shipped with a robust map editor however, so it shouldn’t be long before the community starts churning out new territories to make war on, expanding the sandbox even more.

That said, This is a game that is capable of catering to both the type of gamer that obsesses over the differences between the T-80B and T-80BV as well as those that just want a cerebral strategy game to lose themselves in.

Producer and host of C-SPAN's Washington Journal, and an ardent wargaming fan. His words have also appeared, among other outlets, in The New York Times.