Today we’re taking a close look at something a little different in the world of wargames. Rather than another grand strategy or hex-based tactical wargame, we’re diving into the nitty gritty of combat through the lens of a humble roguelike. Roguelikes, for those unaware of the genre, are generally characterized by roleplaying game statistics, randomly generated levels, permanent death, and often minimalistic graphics.

Armoured Commander II is an Early Access throwback title bringing a traditional rouge-like to 2020. Instead of daggers, goblins, and dungeons, you’re taking the role of a WWII tank commander who must survive battle after battle in a chosen campaign from 1939-45.

At first glance the simplistic graphics of Armoured Commander II might be difficult to understand, but the specks and symbols soon fade only to be replaced by the world they try to evoke. There’s something especially liberating about this kind of ASCII graphic setup. Like one of the most popular ASCII games still played today, Dwarf Fortress, the trade off to Armoured Commander’s graphical limitations is that there is virtually no limit on content.

The little dots, letters, and shapes can come together to represent just about anything, from the sweeping sands of North Africa to the grasslands of Eastern Europe, and about any WWII military unit you can think of therein. What games in this style lack in visual appeal, they make up for in sheer scale. 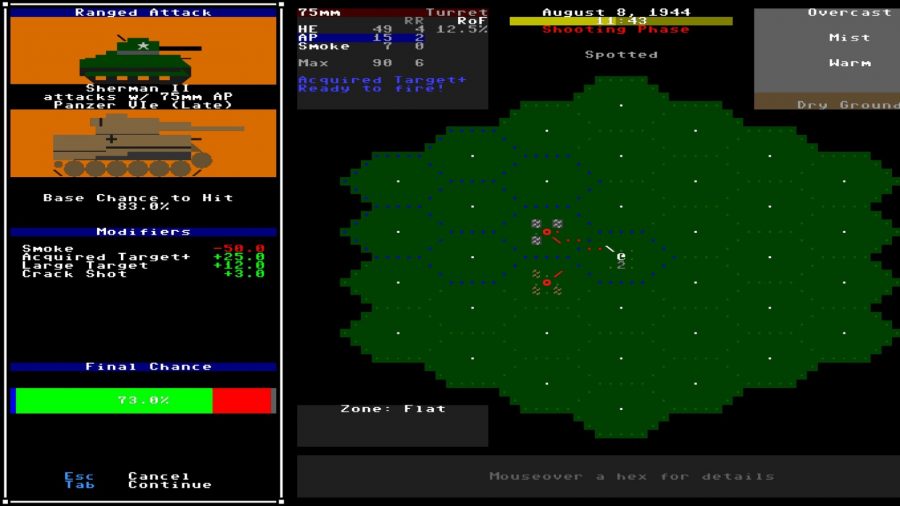 So how exactly does Armoured Commander 2 translate WW2 tank battles into a roguelike? Well, it’s not as complicated as it might have been. You first need to select a campaign. There are 17 at the time of writing, with more planned from a very active developer. These stretch from the invasion of Poland (from both the German and Soviet perspectives) The Winter War, the fall of France, North Africa, Barbarossa, and the invasions of Normandy.

The war is not idle around you - every action costs time

You must then select your tank, crewmembers, and settle some game parameters. These parameters generally serve to make the game more difficult, but with the added bonus of awarding more VP. There are now dozens of tanks to choose from, with your choice obviously restricted by the campaign in which you’re fighting. Crewmembers are customizable as well, and each will gain experience as they fight which can be translated into new skills. Your nameable crew will grow with you as a campaign progresses, and it will sting when one of them dies.

The actual conduct of a campaign is where we get into the roguelike elements. You will be randomly assigned a mission suited to the campaign, like spearheading an assault, fighting a pitched battle, or performing a fighting retreat. There are a few different types of missions and they add nuance to the gameplay and choices that a player will make, but the general gameplay is similar. You will navigate your tank (plus any squad mates) along a hexagonal map filled with different terrain and key points. Scouting ahead, deciding to hold and wait, when to refit, and when to charge into the unknown are all important decisions that you must make at this macro level. The war is not idle around you either. Every action costs time, and friendly and enemy units will make moves as well across the wider map, though your intelligence is limited. 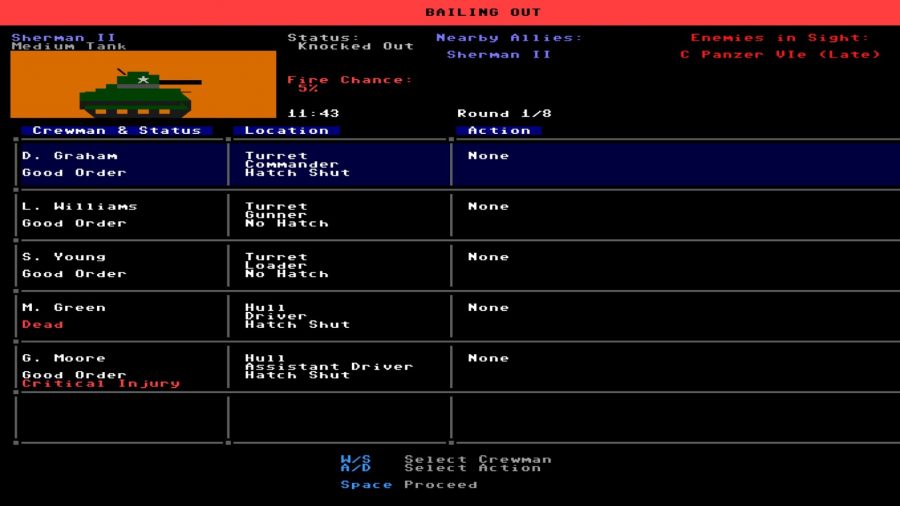 When you encounter enemies, the game switches to a close view of the terrain over which you’ll actually be engaging targets. Fog of war is present here as well, and you’ll need to take into consideration terrain, movement time, and range when conducting yourself. One wrong move could get your tank destroyed. Fate points are an optional limited resource that act as a get out of jail free card, but even playing with them won’t save you from your own incompetence.

Combat turns are broken down into several phases. First you issue commands to each of your tank’s crew members, then enact those commands. Fighting is done via transparent dice rolling so it will generally make sense when and why your attacks hit or miss, though it might take some time to understand how terrain affects range and line of sight. That might be the only complaint I have. It isn’t always entirely clear why a particular enemy isn’t in line of sight, especially when they’re a single hex away. 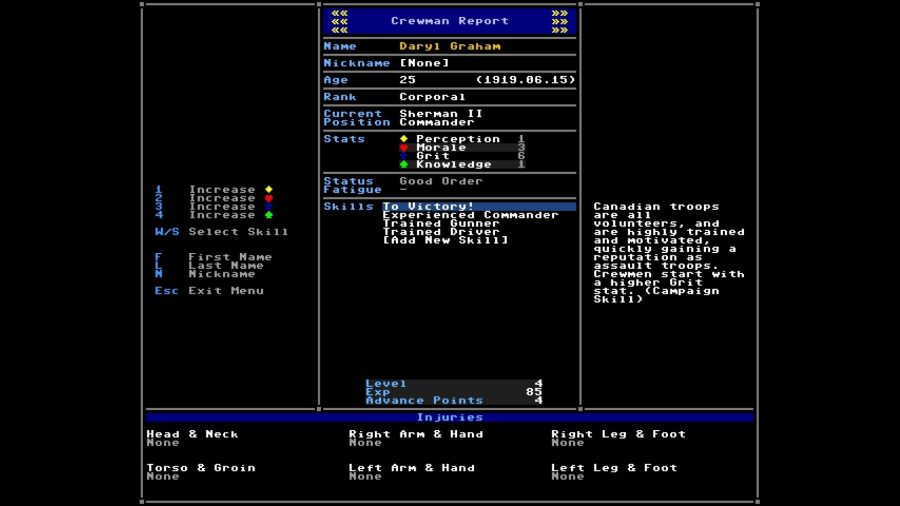 Another thing that potential players should be aware of is the difficulty. Armoured Commander II isn’t pulling any punches. In my latest campaign as a Canadian Sherman commander in 1944, I lost 4 tanks and 2 crew members over the course of an in game month, 15 days of which I personally spent in the hospital after a Tiger had its way with us. If you add the realism bonuses in the settings things get even harder.

I’m inclined to treat this as a positive, but fair warning: Armoured Commander II adheres to that most sacred of roguelike genre tropes – it tries very hard to kill you.

Between the writing of this article and publication Armoured Commander II received a major update. The author had this to say:

The new update adds a lot of new content, so far entirely positive. Special ammo is now available depending on the campaign and tank used, allied units, before an abstraction, can now be called into help attack a zone, and more enemy information is available.

Altogether it looks like it will continue to receive these updates and I couldn’t be happier that it’s getting the attention it deserves.

More in the tank: These are the best WW2 games

In the end I feel like Armoured Commander II can quickly fall into a comfortable rhythm. Getting your head around the primitive graphics and simple, but well organized, structure of play can lead to many hours of cozy fun trying to preserve yourself and your crew for an entire campaign. The wide range of units and settings is also a wonderful thing to see in a game of this scope, and it looks like the developer is hard at work adding more and more content every few weeks.

To top it off, it appears to my laymen’s eyes that the official Armoured Commander II web page has the game’s source code linked on GitHub, so the intrepid among us might be able to wade into modding. This is a complete and enjoyable gaming experience right now, so I urge anyone remotely interested to hop on over to steam and support an indie developer who’s doing something interesting with an old idea.

Armoured Commander II was released onto Steam Early Access in May 2020. At the time of writing, the developer is aiming for a ‘Summer 2021’ date for the full release.