Blood Bowl is the longest-running fantasy miniatures ruleset of all time. Sure, Warhammer itself is technically older, but that system underwent massive changes with the cancellation of Warhammer Fantasy and the release of Warhammer: Age of Sigmar, while Games Workshop’s irreverent game of ‘fantasy football’ (ho ho) remains essentially the same. It’s astounding to think how Blood Bowl has managed to retain its core engine for over three decades and still feel relevant and exciting to play, as you plop your team down on the pitch and crush some skulls.

Most in the miniatures gaming community have heard of this game. A significant chunk have played it at one time or another. For those who haven’t, sit down for some schoolin’.

This is a miniatures tabletop game set in an alternate timeline of the Warhammer Old World. Instead of going to battle, the various factions have decided to settle their grievances on the crimson-soaked grass of a sports field. Despite being made by a UK company, Blood Bowl actually hews most closely to American Football. Players wield teams of various colourful fantasy miniatures such as Orcs, Halflings, and Elves. Over a two-hour stretch of blissful dice rolling you will break your opponents’ bodies and hopefully score a touchdown or two. This is what we refer to in the business as ‘good clean fun’.

The game has seen numerous editions through the 80s and 90s. While players still played, the official ruleset saw little change in the early 2000s, quietly humming along with a living rulebook until 2016. That’s when Games Workshop surprised us all with a shiny new boxed release of the game that promised to reinvigorate leagues across the world and inject fresh life into the community. 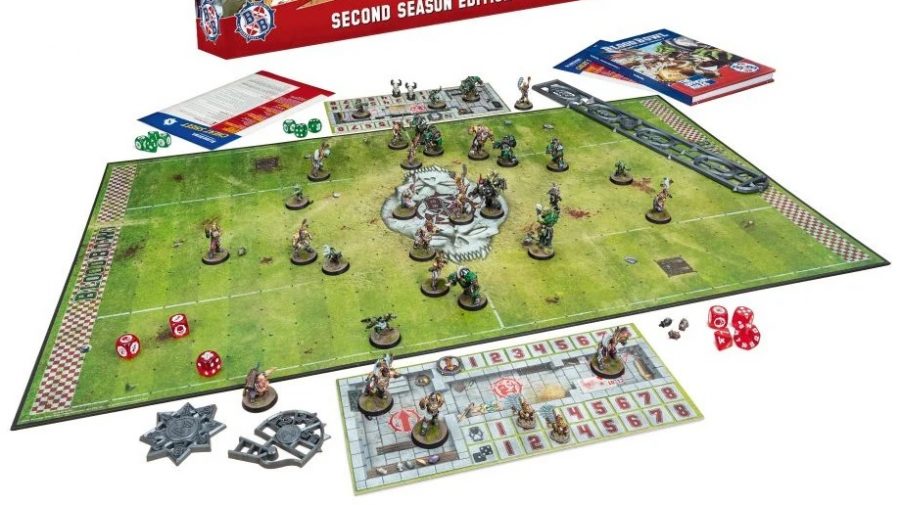 And that happened, up to a point. The 2016 edition was very successful, and it also served as one of the early flags of Games Workshop’s redemption arc. The Nottingham company had been feeling stagnant for some time, gaining a reputation for shutting down fan content and internet communities as opposed to actually pumping out stellar support for their game lines. As many know, that dark time is in the past and the Games Workshop we have today is completely made over. 2016’s Blood Bowl was the physical genesis of this new age.

The ruleset was updated in this release with small touches here and there. There was a visible attempt for modernization but it struggled a bit to maintain the game’s long standing DNA and not upset the existing fan base. It retained the core system of activating figures and attempting actions until you fail a roll, causing a turnover. This was important, as the heart of the game remained true. There were missteps, however.

The largest issue with the 2016 set was that it felt shallow; It was not a complete boxed game intended for longevity. Rather, it was focused on the two included teams and felt more like an isolated board game as opposed to a relaunch of a long-standing platform and eco-system. 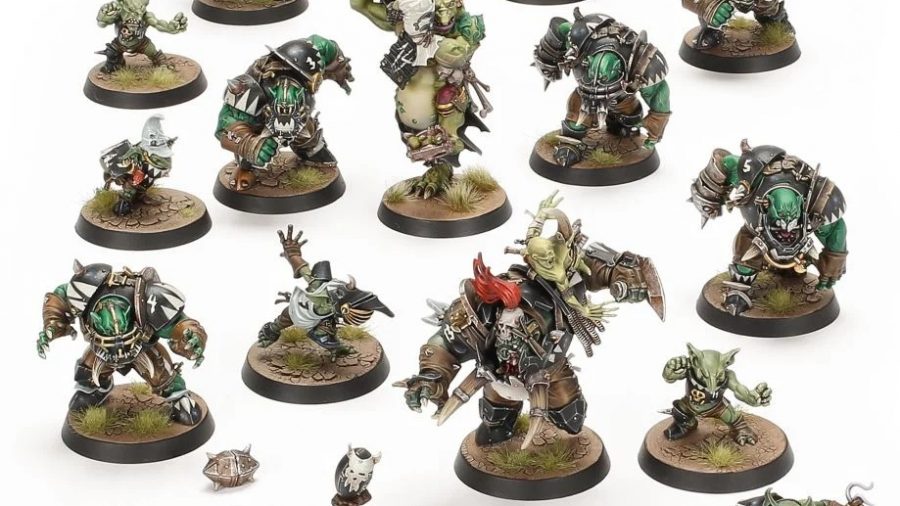 Expansion material would be released over time, drip fed to players in a similar fashion to the re-launch of Necromunda. That was clearly a mistake, and to Games Workshop’s credit it’s one they’ve now recognized and adapted to. So here we are: it’s 2020 and Blood Bowl is back (again). This new boxed set feels educated, like it’s learned from its mistakes and thankfully it comes through on all of its promise.

The biggest thing here is that this is a hell of a set. The miniatures are fantastic: I adore the Imperial Nobles with their oversized feathers fluttering in the wind. Those models are pure old school Warhammer hearkening back to the days when I was flipping through a Citadel magazine and eyeing mounds of pewter warriors. 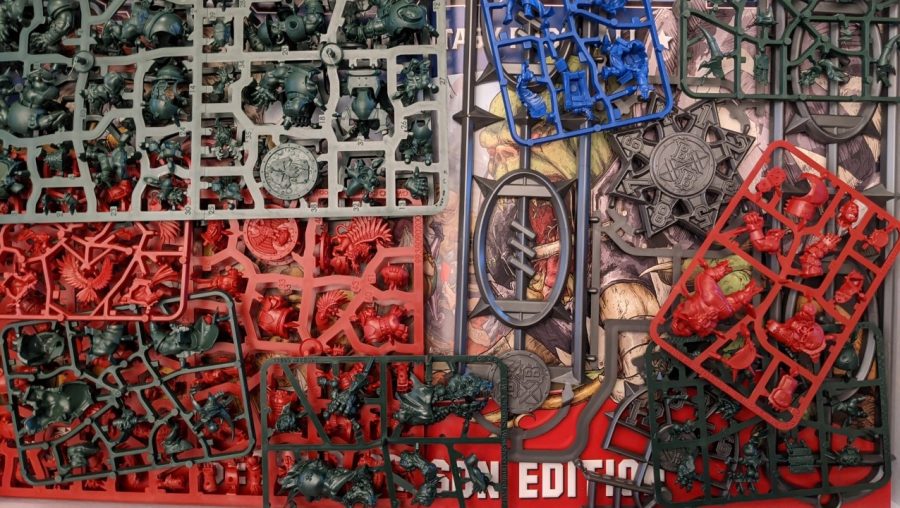 Moving beyond the plastic; let’s talk about the hardback rulebook. This thing is lovely. It includes a history of the sport, a ton of really fantastic artwork, and a consolidated ruleset that is all encompassing. You get all the necessary details for referees, star players, and every single Blood Bowl team. Yes, just like it’s sister game Blitz Bowl, they’ve tossed in every stat line and ability needed to field whatever you’d like.

The rules have been streamlined a bit, but don’t worry, it’s all for the better

And yes, those rules have changed a bit. There has been some streamlining and modernization, but don’t worry, it’s all for the better. First off, like other recent GW games, the stat lines have shifted from base stats to target numbers. I have fond memories of referencing Ballistic Skill and Toughness charts back in my youth, but it’s 2020 and things change. This may require a mental shift at first, but it’s such a smoother on-boarding for newbies that this is a huge quality of life improvement for the game overall. It also speeds the game up a smidge which is never a bad thing.

Passing has also been broken out into its own state. This makes for a more interesting approach to team building as you have more angles to consider. It also helps speed up target number calculation again as it has the old passing modifier baked in. I also absolutely love that passing interference doesn’t result in an automatic turnover now, instead the ball can be swatted and scatter causing more possible outcomes and zaniness to occur in the play. 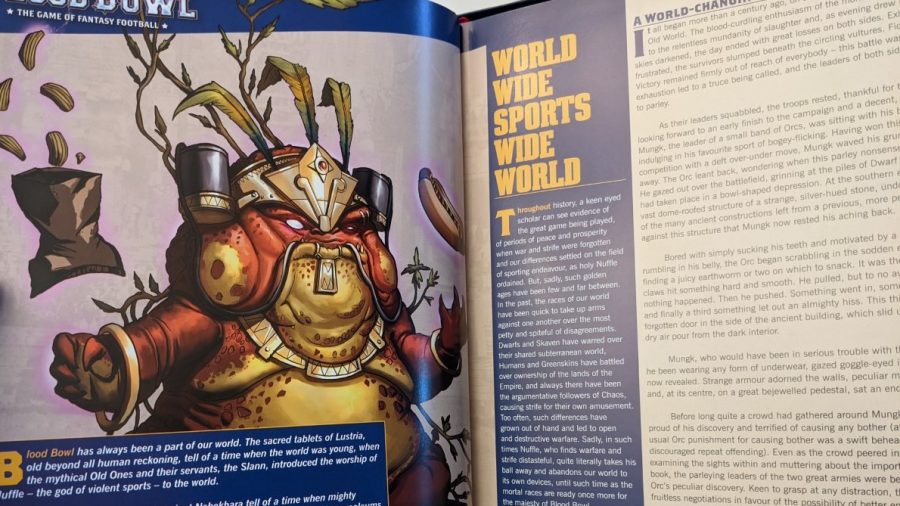 All of this is great but one of the biggest changes for me is the reduction in cost for Star Players. This set comes with one for each team and they radically shift the experience. It’s a very simple way to really beef up the field and add a few new special rules and abilities to your club, allowing the execution of new strategies and plays. These were underutilized in the previous ruleset and I’m overjoyed to see this rectified.

The sum of these changes and the package as a whole results in a wonderful release. As a product, it bleeds passion for the game. You can see the love and care that’s gone into every inch of detail. Small touches mean a great deal such as including fantastic player aids as well as a double-sided board with a surface matching the Blitz Bowl pitch. The thought and precision here is clear. 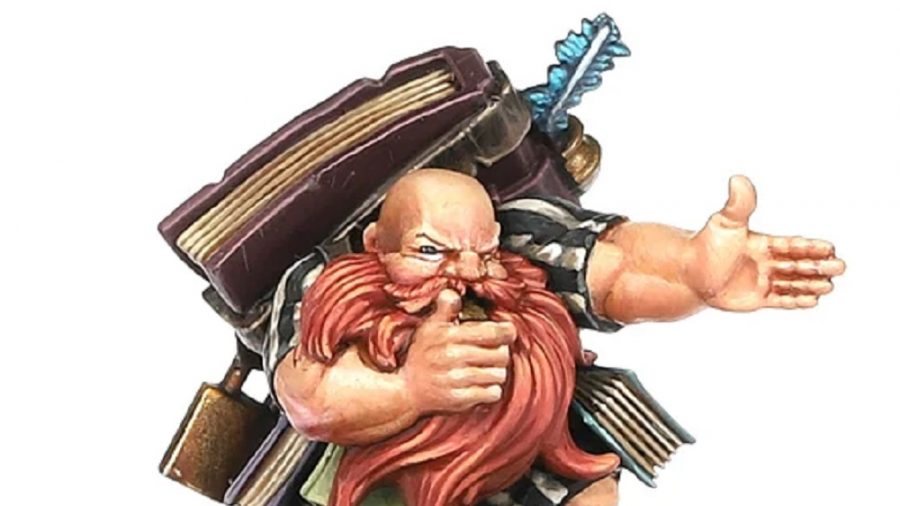 It’s evident that fans who hold this classic game dear to their heart have really had the presence and agency to leave their mark in this design. They have pushed the game forward while not straying from the tried and true core systems. While I still may prefer the pace and absurdity of Blitz Bowl, there’s no denying that this is an exceptional game. Most importantly, this is probably the best version of Blood Bowl to date.