Carrier Battles 4: Guadalcanal is a recent port by Avalon Digital of a successful mobile game. Knowing that, I was a little hesitant heading into this review, given that some things I’ve come to expect from ‘proper’ PC wargames might be hard to implement in a port. My fears were generally unfounded though. Carrier Battles is an impressive port of a solid game.

True there are bugs and missing features, but for a one-man development team it is surprisingly coherent, the new additions are very welcome, and there is a good deal of communication about what’s coming next.

Several patches fixing launch issues have already come out in the brief time I’ve had access to the game for review purposes. All of that is a good sign. So, what exactly are you getting with the PC version of Carrier Battles 4? Well, everything that was offered in the mobile app with a lot more new features than I had expected. Aside from portability, it is by far the superior offering. But before I let myself ramble, lets get to the basics.

Carrier Battles takes the core concept of Second World War naval-air warfare and distils it down into an eminently playable form. Players control a number of naval task forces/fleets and island air bases. They manoeuvre these naval forces across the waters of the south pacific and launch air wing missions, trying to complete objectives, track down opposing fleets, and protect their own. The cat and mouse game of tracking enemies and protecting your own ships is the main loop. 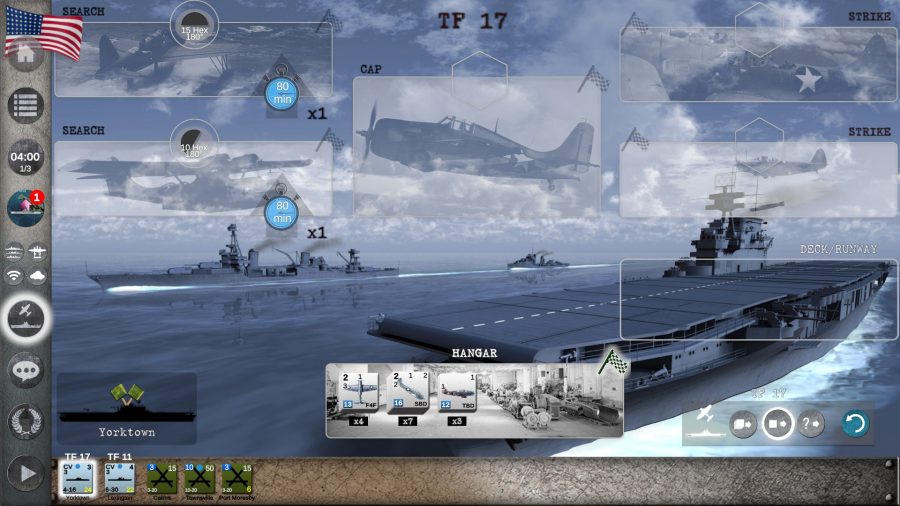 Fog of war hides all enemy surface fleets or air forces unless something on your side (coastal watchers, scout planes, intended targets) spot them. This means each game harbours an interesting tension as you send out scout planes, trying to form a plan based on what little intel is filtering back to you while always wondering if you missed that big attack wave that’s already on its way to ruin your day. Remember, it takes time to scramble defensive aircraft!

Gameplay and UI are simple and clean. Looking at a hex covered map of whatever region of the pacific you’re fighting over, you either assign destinations for your fleets to move towards, or else drag and drop individual fleets one hex at a time. At the same time you’re launching scout missions or strikes as needed. Sending off air missions is a breeze. A single unified screen lets you tab between different carriers and airbases, and missions are as simple as dragging a wing onto a certain task and finalizing some details. These tasks are laid out as simply as possible. Per base/carrier you can have two search flights, two strike flights and a single Combat Air Patrol (CAP). There is also a holding box on the runway for quick scrambling. Turns are broken up into 3 rounds of 20 minutes. Everything happens in these 20 minute intervals so planning around timing, especially nightfall and daybreak, are incredibly important.

In fact, timing everything is where strategic planning and player choices really come into play. Knowing that there is an enemy out there trying just as hard to find your ships as you are theirs, you’ve got to be thinking several turns ahead. It can take 20-40 minutes in perfect conditions to get units in the air. But, this can be exacerbated by crowding and weather. Woe to the carrier that has a strike clogging the deck and no CAP in the air as a major strike appears a hex away. In this the AI is generally competent. They know how to go after their objectives and put strikes together. Only occasionally do they seem to send hopelessly inferior strikes out, so I’m happy overall. 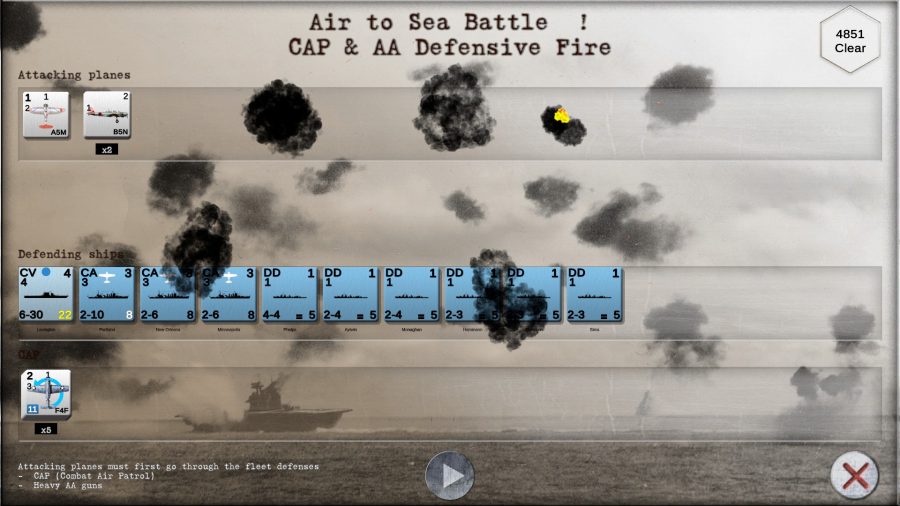 Combat is automated. Strikes have to make it through Anti-air attacks and CAP before being able to drop torpedoes or bombs. They are vulnerable to fire on the way out as well. Planes can also break down or crash, especially if you’re trying to land them at night. Surface combat is similarly hands-off. Both sides face off and each unit picks targets. There is some nice detail in the damage modeling for ships. Losing a destroyer to a lucky bomb that hit their torpedoes is frustrating, but a nice historical touch. Making sure you’ve got the right forces in the right place is where the true gameplay lies.

Full ahead aye: Read our guide to the best naval games

There is an interesting variety of missions too. Not only the battles surrounding control of Guadalcanal, but all the major engagements are here in a step up from the mobile game. Playing a hypothetical Battle for Wake island where the US task forces actually went ahead with the plan to attempt relief is good fun, as is playing Operation Ke from the Japanese perspective, where you attempt to extract your weary soldiers from Guadalcanal with inferior forces. Timing your destroyers to arrive at night and be gone before local air superiority is up and running is a tense experience. Alongside those are several Guadalcanal focused missions and the big hitters like Coral Sea and Midway. 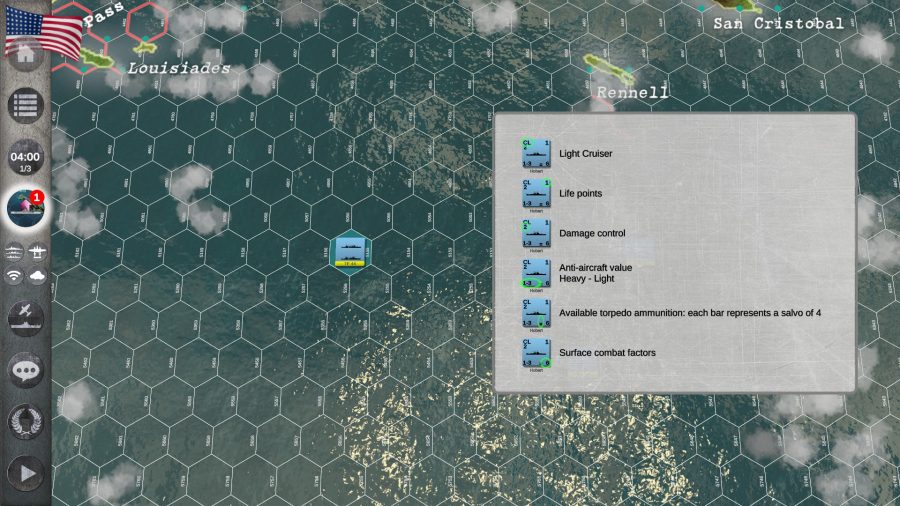 It’s an elegant system. After both tutorials and a brief look at the included manual and I was up and running and into my first scenarios. Those looking for the intensity of Gary Grigsby’s War in the Pacific won’t find it here, but that’s not a bad thing. You can crank out most missions in an hour or two, and those will generally be enjoyable hours. There are some sacrifices though. The game takes over some of the busy work that I know many will want control over, like arming planes and dedicated scout craft. The AI handles that for you, but the choice would be nice. The only real problem for me is the lack of submarines. These were a fairly crucial component of naval scouting and intelligence during the war and their absence is felt. The developer has promised their eventual inclusion, however.

Simple, but carries the weight of dealing with fog of war, scheduling, and brutal air combat

The submarine issue leads to my only real gripes with the game. It doesn’t quite feel finished yet. The first time I launched the tutorial the game crashed entirely. It hasn’t happened since and the multiple patches are reassuring, but it all points to a game that needed another month to iron out shortcomings. There are occasional bugs still, I’ve had the turn button not work, some chugging with the UI and weather effects, and sometimes odd AI plane management. There also need to be some quality of life improvements, like the ability to cancel missions. There is an undo function, but that doesn’t help when you throw up two wings and can only undo one.

That isn’t to say that the game is bad. Quite the opposite really. I enjoyed Carrier Battles immensely. It’s simple, yes, but it carries the weight of battling the fog of war, your own scheduling, and the brutal nature of distant air combat. It’s a great simulation wrapped in a (mostly) tight package that delivers what I expect it to. I definitely recommend it now, but if you’re exceptionally wary, give it a week or two before diving in.

This review was kindly donated to Wargamer by the author.