Dominions 5: Warriors of the Faith is a kick-ass wargame, but, alas, becoming a territorially-challenged demigod doesn’t come with the quick-start guide we would have liked.  When you’re just getting started raising your armies of wizards,  dragons and giant spiders, it can be tricky to know which crystal goes where and what to prioritise, to make sure your fledgeling empire isn’t squashed underfoot before getting its chance to flourish. Have no fear! Our guide will tell you all you need to know to have you acing your divine decisions in no time.

A bit of digital housekeeping first: before you get into a game of Dominions, you should visit the options menu. You need to make two changes there: enable multi-turn moves and have tasks automatically assigned to your commanders. The former is great when you’re trying to send scouts, heroes and armies somewhere far away and don’t want to micro their route every turn. The latter will make sure that any wizards that you train will automatically be set to research spells – after all, that’s why you’ll be hiring the bulk of wizards.

With these two essential quality-of-life options firmly selected, you can now start the game!

We’ll begin, as is customary, at the beginning: choosing which great realm will be yours. 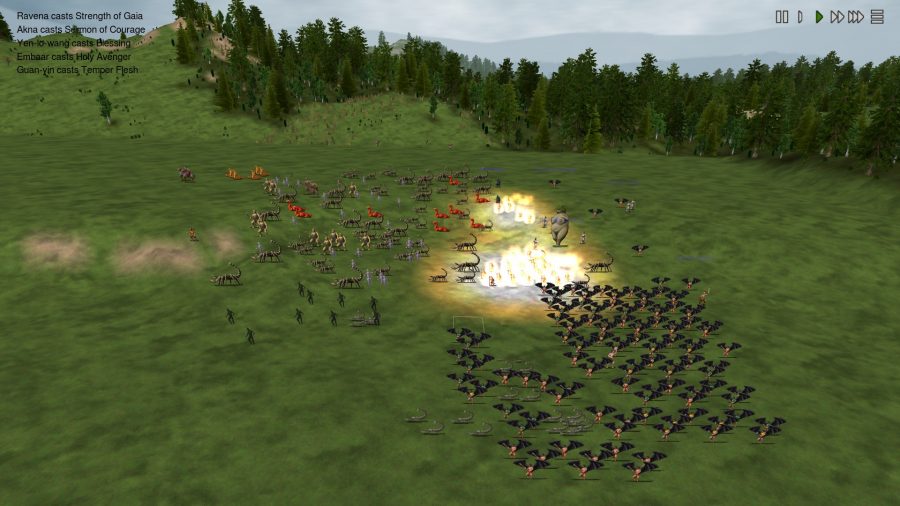 Map options aren’t as important as your choice of age or nation. Dominions 5 has 80 or so playable nations, spread over three ages. The choice of age/era hugely influences your game. The Early Age is the most magical, yet the least technologically advanced; you’ll have a lot of powerful wizards and spell gems for casting magic, but spell research will be harder and your armies – bless them – will count themselves lucky if they’re clad in bronze. The Late Age is the opposite: you are adept at both magical research and making quality steel, but the mages are weaker and there are fewer magical resources. The Middle Age is, shockingly, somewhere between the two.

The nations aree not exactly balanced; beginners should avoid underwater ones

Now you can select your nation. They are not exactly balanced against each other and the beginner player will want to avoid underwater nations, as well as ones that rely on Death a whole lot. The others are a little more nuanced: you can play a nation that relies on horde armies, or one that has expensive elite troops – or just a nation of giants, really. The important thing to note here is what magic is favoured by that nation: this will determines in which avenues of the arcane arts your wizards will be most powerful.

Creating a ‘pretender’ is the most exciting part: you can craft your own godling! They are separated into categories by the strength of their dominion and their faith, which affects regions that are under it. At the top of the pile, you have the pretenders that are the strongest in dominion – your flaming glyphs, your obelisks, fountains of blood and so on. These pretenders tend to be hard to kill, but immobile – which means they can’t be used to bully neutral armies early on. Still, it’s a good choice for a beginner, especially if the pretender is research-inclined. Having them sit in the capital constantly researching spells is no bad thing. 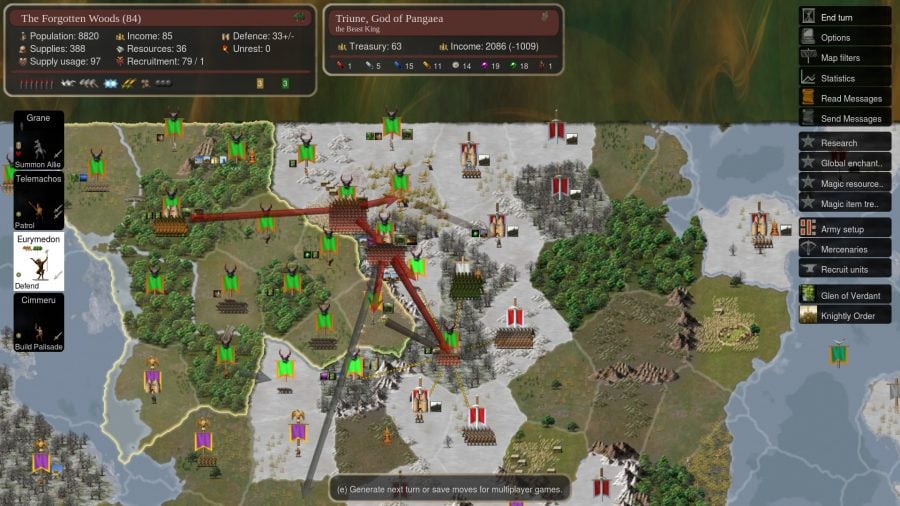 You can then spend points on magic skills – those are usually cheaper for pretenders that aren’t combat monsters (like dragons). Your magical skill can influence the effect of the blessings your priests give to your holy troops; if you have a magical sphere at level 4 (or higher) this will give you four (or more) points to buy bless effects. Some of the more powerful effects only work if the pretender is in-game (not asleep or dead). If you have an immobile pretender, it’s a safe bet to pump one magic skill to get the best effects.

Get ogre it: Read our Fantasy General 2: Empire Aflame review

Any points left over will be used to modify the generic dominion effects on the lands that worship you. Generally, you’ll want peace over chaos, work over sloth and so on. The only place where you can somewhat safely strip points away is magic/drain, since drain mainly affects research points. For the first game, you shouldn’t mess around with sleeping or imprisoned pretenders, nor should you fiddle with the other game settings. 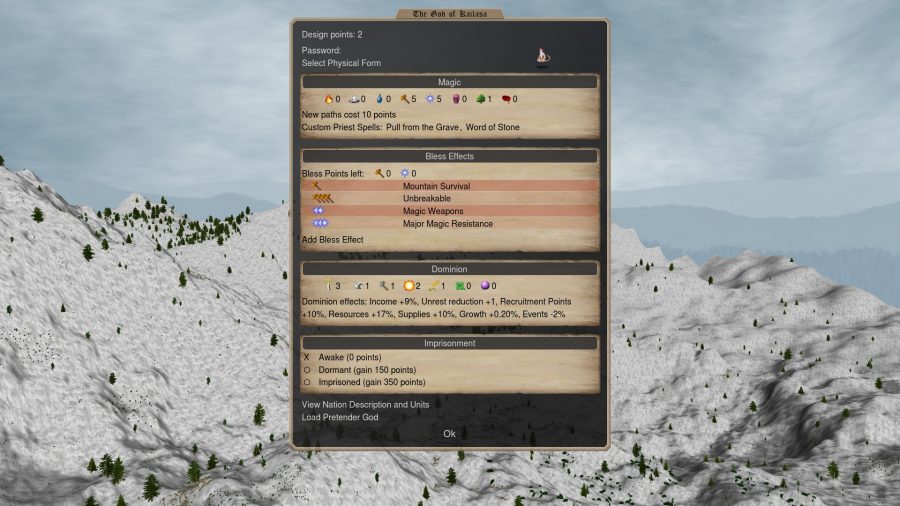 AM God, What Do

A game usually starts with you controlling your capital, which houses your pretender god, a general with a small army and a scout. Before you do anything else, you should memorise one thing: the peculiar control scheme of Dominions 5 means that you select provinces with a right click (right clicking also gives you information about things), but you use left click to select generals and other things.

If you want a general to move, select him with a left click and then send him to the desired province with an another left click. Bizarre? Yes. Will you get used to it? Maybe. Will you still mis-click stuff 55 hours in? Most definitely! Since Dominions 5 isn’t ‘baby’s first 4X game’, it will not hold your hand. You are now free to do anything you can.

What you should do is send the scout to a nearby province – selecting him will show where he can go (most units can’t cross rivers and mountains). Scouting is useful for planning conquest, as it reveals information about enemy forces. You should also set up magical research in the research tab: right-click spell categories to see what spells the next tier of research will give, and right click the spells for their effects. Magic is super-important in the game; don’t neglect it! 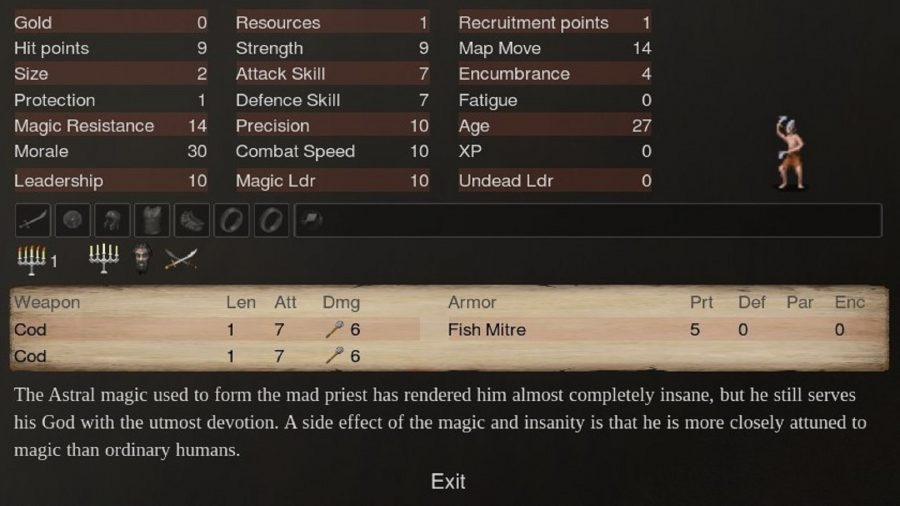 Meanwhile, for the general, you should probably hire more soldiers. If the memory serves, “R” is the hotkey for that. The recruitment screen is separated into two parts. The upper one is for leaders and heroes, the lower one is for regular dudes. Crappy scouts are mostly on the left, blessed magical super beings on the right. Each unit costs gold to build (and maintain), while the province’s resources and recruitment points (neither of which can be stacked between turns) cap how much you can recruit. Commanders are also limited by the province’s command point allowance, while holy units are restricted by holy points. You can also click the check mark to continue the build queue indefinitely – useful for cranking out mages for research or producing those rare and expensive holy units in the capital. Anyway: order some regular dudes for your army.

Next turn, when your units are built, you’ll be able to transfer them the army via the Army Setup tab. There, you can hide researching heroes with “x.” You are then left with units that have other orders – your run-of-the-mill general is most likely on ‘Defend’. Here, you can add units to his army (just select them in the top bar and drop them on already existing squad that the general has – if you drop them on the general, it will create another squad). Be mindful of his command limits! You can’t really make heroes lead more units than they can handle – but giving one general too many squads will incur horrible penalties on morale. 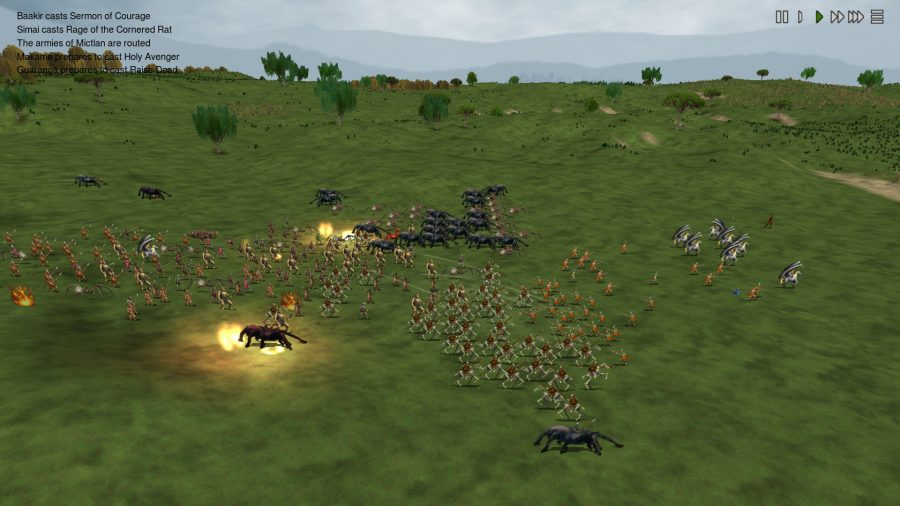 Once you have your units in an army, choose which neighboring province you want to attack. Send your general (if he has an army, there will be swords next to his card on the interface) to attack it: left click the general, then the offending province. You can also hold CTRL and click any other heroes (priests, mages) that you want to accompany him. Follow up with a left click on the desirable province, and all will be well.

To get more control in battle, set up behaviours for your generals and units

You can’t really control the battle, but you can see a replay of it next turn. If you want to actually control things, you can set up behaviours for your generals and units, as well as their formations and places in battle – this is done in the army setup screen. It’s a good idea, for example, to tell your flying units to hold, and then attack rearmost units – this is an easy way to assassinate enemy commanders and wizards.

Once you have conquered a region, you should tell the general to patrol it for a turn – to kill some bandits and bring down unrest. You do this by left-clicking the action written on the character card, bringing up an action menu. If you have a wizard in the province, you can tell him to search for magical sites – those generate gems used in ritual spells (accessed through the same menu in friendly lands that have a laboratory). A priest can preach – though constructing a temple might be more important. It’s done via the same menu by selecting building construction, then temple (one of the three buildings you can build in-game). Construct temples everywhere to keep your dominion strong.

From these humble beginnings, you will be able to eventually trial-and-error your way into playing Dominions 5 at a decent level. You will discover why “N” is one of the most useful hotkeys, the wonders of constructing artefacts and why you should give your front-line casters magical gems. But, for now, throw more meat into the grinder!

A freelance games writer with Many Opinions about Warhammer 40,000, Martynas's words have also appeared on PCGamesN, Strategy Gamer, and PC Invasion.