Empire Aflame (EA) is the second DLC pack for Fantasy General 2 (FG2). Deciding whether to purchase it is a fairly straightforward decision. If you are looking for a new story, set in the lands of Keldonia, then pick this expansion up. If you were hoping for any major gameplay additions or a new faction, then this is not for you. Yet, despite not moving the game forward in any major way, the gameplay is still solid, the mechanics still feel original and the experience is still fun.

FG2’s first DLC pack, Onslaught, introduced a more randomised or procedural campaign experience. There was a broad narrative which gave some context to the campaign, but it was vague enough to be applicable to any of the heroes you selected to play. The thirty maps that made up the campaign were procedurally generated, and it veered towards a more sandbox style experience.

EA pivots back towards the original campaign setup, albeit, one that tries to combine the best elements from the two campaign systems. The story is once again front-and-centre and the random elements are toned down, opting instead for a branching storyline.

Ultimately, the Empire Aflame campaign amounts to a series of narrative forks: points where you need to make choices about which missions to undertake, which faction to side with, which person to kill or spare. These decisions will offer you access to specific merchants and their wares, align you to various factions, net you unique units or lead you down multiple story paths. Your choices feel like they have weight behind them. This may be in part due to the game’s emphasis on making your units unique (through upgrades, buffs and experience), but your choices also have an enduring impact on the story. 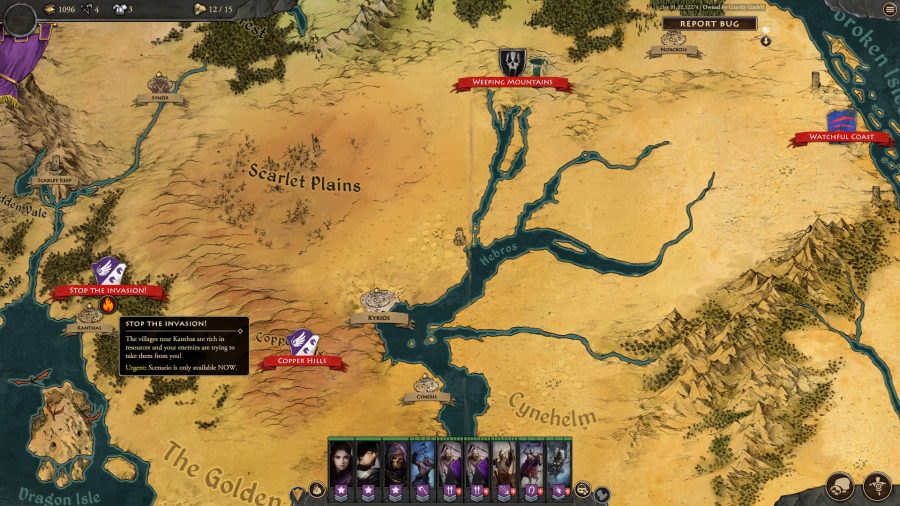 The new campaign is clearly designed to be played multiple times. And whilst there are a number of combinations that can be explored, the average player is likely to get around two or three playthroughs from their purchase. With that said, I’m not sure I want to play it more than once. In many ways, I’m starting to feel some FG2 fatigue.

That’s because this DLC pack doesn’t really offer anything new. It expands the game’s story content without really expanding the gameplay. I enjoyed it, but it was in spite of the DLC Pack, not because of it. What I’m trying to say is that the underlying gameplay mechanics of FG2 remain its greatest strength. The game is carried by its engaging tactical battles and interesting army management systems—as opposed to its story content.

Like previous entries, the story is interesting enough and it gives your battles some context. Dialogue is patchy in places. But my biggest issue is that the game leans too heavily on both fantasy and historical tropes. The haughty general from the Roman/Byzantine inspired Empire, the Germanic barbarians from the cold north, it’s all a bit cliched, a bit too on the nose. 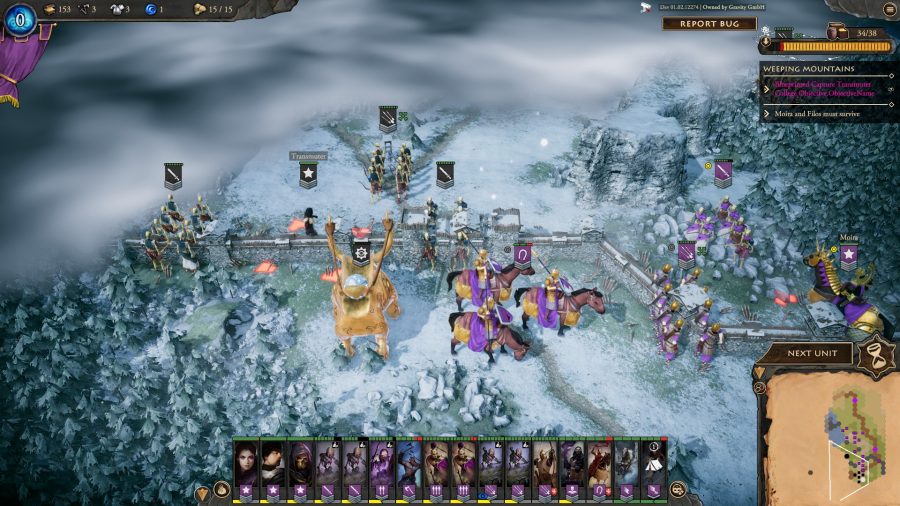 With that said, the map of Keldonia looks fantastic and the campaign makes you feel as though there is a world of competing interests, warring factions, civil wars, in short… a living world. But unlike the worlds of The Witcher or Warhammer, Keldonia is not fleshed out in any detail. Given the size of the development studio, I’m not expecting it to be. But that’s a shame, as it looks like it could be an interesting place.

Back to reality: Discover our guide to the best medieval games

Outside of the campaign there are ten new units: five new frost trolls and five shadow creatures. There are two new heroes available: Filos and Moira. Like the heroes from the base game, they have their own unique skill trees for players to explore. There are also some secondary heroes encountered throughout the campaign, again with their own skill trees. 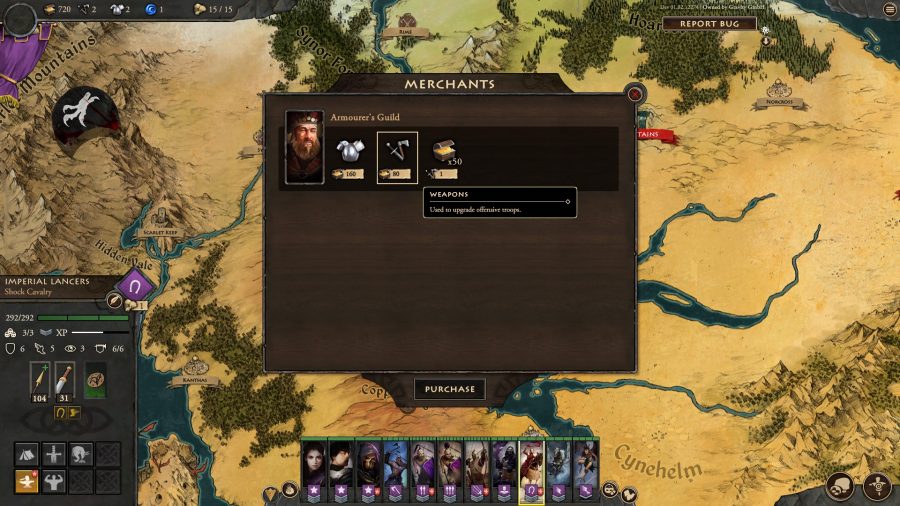 The press release states that a new faction has been added, namely, the Empire. This is not entirely true, as they were playable in the previous expansion, Onslaught. However, EA is the first Empire specific campaign for the game.

Unless you want a new story set in Keldonia, there’s not much here to warrant a purchase

I also found it a little confusing that ‘new vendors’ and ‘new training’ were listed as features on the game’s store page. This gives the impression that they are new features tied to the DLC. They are not. Merchants allow you to buy and sell resources and can be unlocked at various points along the campaign. Training grounds allow you to spend resources to give your units new skills and abilities.

However, both functions were already added to the game in a previous patch. With that said, the training ground abilities are tied to the heroes you have in your army. Given there are new heroes available in EA, I guess it’s fair to say that there are some new options available. Some winter maps round out the new additions. 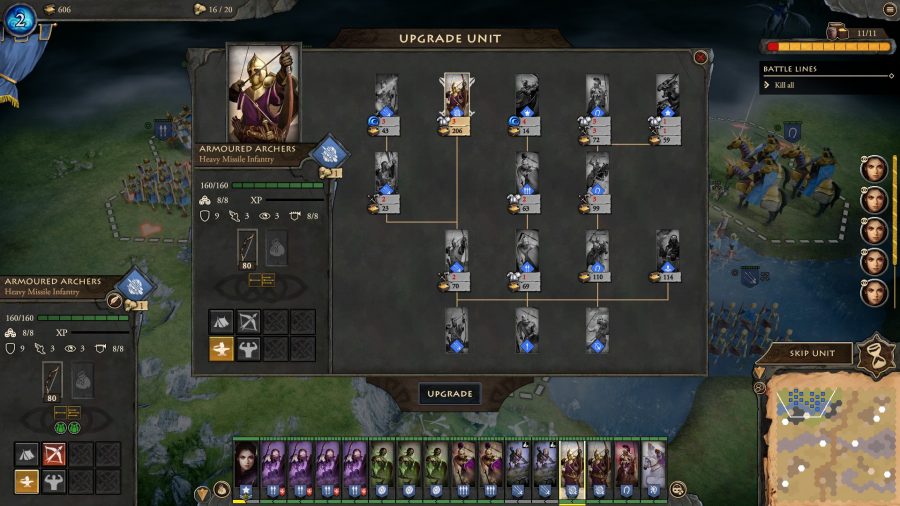 At this point you already know whether you like Fantasy General 2 and whether the gameplay loop still holds your interest. So, your decision to purchase Empire Aflame should really be guided by whether you want to play through a new story campaign. If you do, then I can recommend picking up this DLC pack.

Given the branching nature of the campaign, I can easily see people playing it at least twice. If you already own the Onslaught DLC, then purchasing EA also rounds out your experience—in terms of offering a full campaign for each faction (Barbarian and Empire), along with the more sandbox style Onslaught game mode. But unless you are specifically looking for a new story set in Keldonia, there’s not much else here to warrant a purchase.