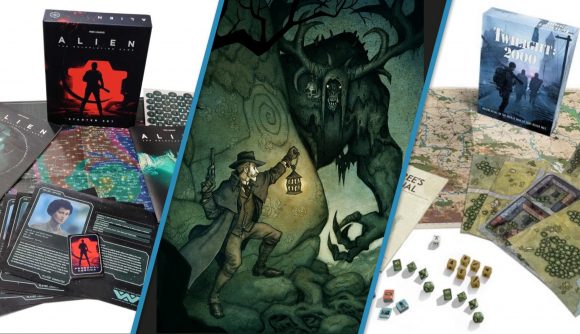 What better way to spend the holiday season than by picking up a new tabletop RPG. There’s plenty of time to learn its system, create a party, and set forth on a wondrous adventure that will have you and your pals reminiscing for years to come. With that in mind, Wargamer has partnered with Free League publishing to give away two bundles filled to the brim with top-notch TTRPGs.

Each bundle is a bumper crop of core sets and expansion material, including the ALIEN Colonial Marines Operations Manual for the award-winning game; the core book for Nordic horror RPG Vaesen, plus the Wicked Secret adventure compendium; the starter set for treasure-hunting, dark fantasy roleplaying game Symbaroum, the Forbidden Lands core set, and the base set for the WW3, alternate-history RPG Twilight 2000 that released only a couple of months ago.

It’s so good, in fact, that we’re giving away the bundle twice. One lucky winner will receive physical copies of all the games plus digital copies, while a second will receive digital copies to download through DriveThruRPG. To enter, simply complete the actions listed below, add your details, and the lovely people at Free League will send you the prizes if you’re randomly selected as the winner. You’ve got until 1pm GMT / 7am EST on Thursday, December 30 to enter.

Whether you’re a long-time D&D fanatic or have only recently discovered the vast world of tabletop RPGs, the games in this bundle are sure to tantalise the storytelling tastebuds of players and GMs of all stripes. Free League have garnered something of a reputation for refined, detailed, and creative roleplaying games, which is on full display here.

Wargamer holiday giveaway #4 – Free League bundle
We’ve still got plenty more giveaways coming over the next few weeks. Be sure to check back to see what other goodies you can bag.