It’s that special time of year again, the time of the DLC drop for Hearts of Iron 4. “But there was a DLC released in February,” I hear you cry. Well, the special time of year can come twice in the same year, dear reader. But what differentiates Battle for the Bosporus from a DLC like La Résistance is that the previous expansion added universal features for the game, like armored cars and the new espionage system.

Battle for the Bosporus is more akin to one of EU4’s smaller DLC packs that only include targeted updates for a specific few nations. Think Third Rome, or Rule Britannia. Indeed, nothing about the game has changed in Battle for the Bosporus except for the focus trees for Turkey, Bulgaria, and Greece – but there is a fair amount to talk about in those focus tree updates. While we broadly like them, there are a few hang-ups and concerns to cover, too.

Romania and Yugoslavia also get a free update with this release, but as that’s free, I won’t be discussing it here except when relevant to the other three.

We begin with the biggest  of the bunch: Turkey. 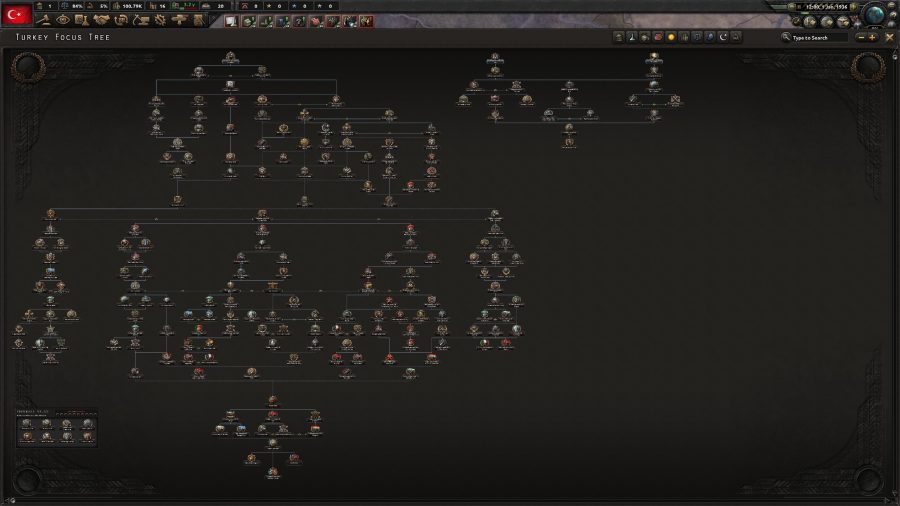 So, Turkey’s new focus tree is just stupidly huge. I had to massively zoom out in order to get the whole thing in a screenshot, and you can see from the image that nothing is really visible. So, to summarize what you can’t see, you can expect a decently expanded version of the ‘Four Paths’ we’ve come to expect from modern focus trees, with branches for Fascism, Communism, Democracy, or an ‘Unaligned’ route, as well as the obligatory separate military tree, which I’ll talk about first.

It’s fairly basic for a state with a reworked focus tree, there’s not much to note on except for a few forts being added here, a couple air bases being added there. The only truly important focuses are at the top and bottom of the tree, which help to eliminate some of Turkey’s standing debuffs they have at the start.

As for politics, Turkey actually has more variety than usual. The top quarter of the political tree focuses on Atatürk as a highly influential leader, and Ottoman loyalists. These are important, as at the start of the game, you are facing resistance from the old loyalists and Kurdish separatists. Depending on what you focus on (ha) up top, you can choose a whole five different paths, four of which tie back together at the bottom. 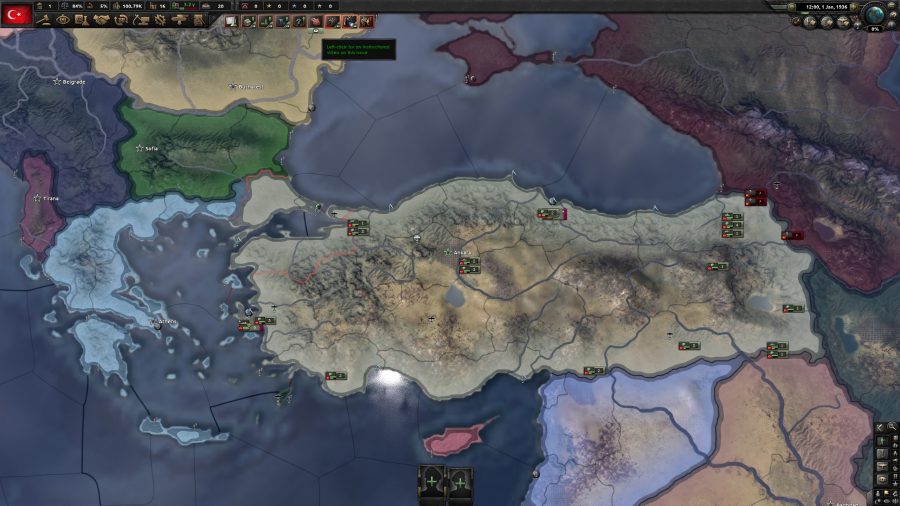 From left-to-right on the tree, you can reclaim the old Ottoman empire (featuring special camel cavalry at the end!), join the British as a Democratic ally, join the Axis as a Fascist ally, join the USSR as a Communist ally, or form an independent pro-Balkan faction.

Heart aching for more? Check out our Hearts of Iron 4 DLC guide

The first few allow annex war goals against former Ottoman territories, which feels somewhat strange, given that you would have not chosen the Ottoman reformation to get here, which is fine.

The later focuses give you war goals that stretch as far north as Murmansk and far east as Mongolia and China itself which is… wrong. It feels very strange, and I’m not a fan of it, and I don’t see a reason for it to be a part of the tree. 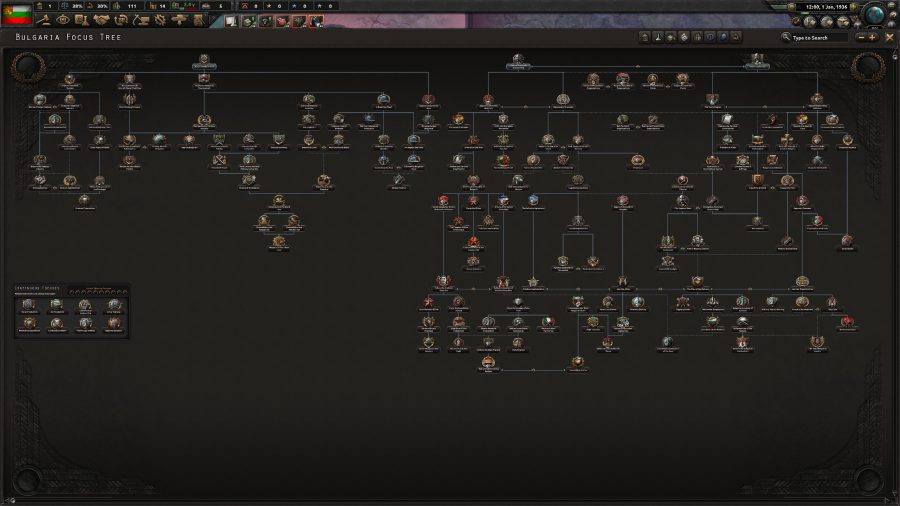 Bulgaria is something of an odd duck in this pack, as a fair amount of its decisions have to do with Yugoslavia. In short, Yugoslavia can decide either to reinforce its position in the Balkans, or to … Balkanize itself, and break up into the constituent states.

Bulgaria can either join hands with Yugoslavia/the breakup states or seek to conquer them, and to that end can encourage some separatist guerrilla movements in Greece and Yugoslavia. As for the trees… The tree overall is not as big as the Turkish behemoth, but is still pretty dang large itself.

Back to basics: Get clued up with our Hearts of Iron 4 tutorial

There’s a separate tree for industry/military concerns, which is much more involved than the Turkish one. There are the typical bonuses to research and auto-forts built, but there are also improvements to resource collection and requests to other states for aid.

This last one is interesting because it hinges on the opinions of other states on you, and waiting too long could cause you to miss out on some beneficial options down the line. 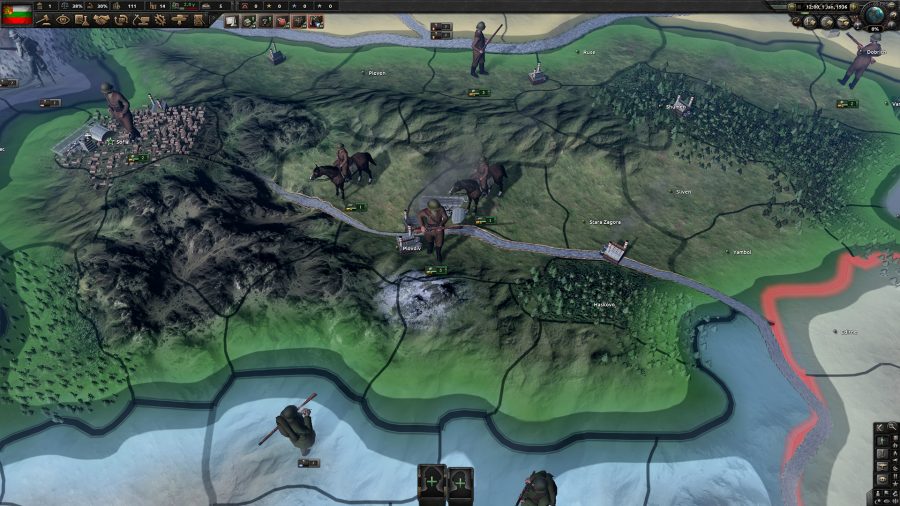 The political tree, like Turkey’s, has several different routes, with the normal Democratic, Fascist, and Communist options, with Monarchist options added on top.

The end of the trees count on the first options, which asks what Bulgaria will do with its terrible king; kicking the king out will let Bulgaria become Communist or Democratic, reforming the kingdom will allow the other options, but will allow a Democratic path as well. It’s more flexible than Turkey’s tree, and I think it’s a solid design overall.

Axis and/or Allies: Read our guide to the best WW2 games

Who these buffs apply to is situational, but those are some absolutely crazy numbers and I worry that Bulgaria could easily become overpowered due to them. 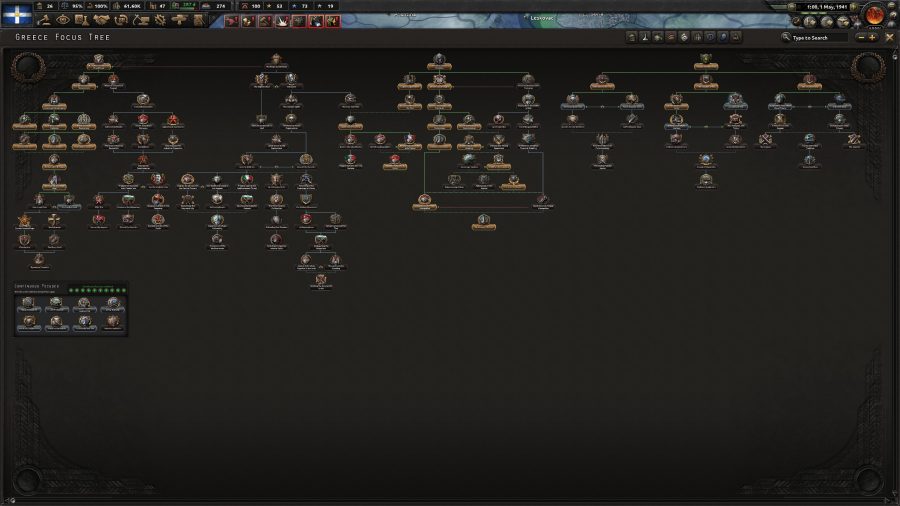 Last but not least is Greece, who have a ‘reform Byzantium’ option because of course they do. The Greek tree is the simplest of the three states, but is my favorite due to the situation the Greeks find themselves in at the start. The Greeks have a terrible economy and are in debt, and many of their early focuses and decisions are based around eliminating this debt, which causes massive debuffs to Greece overall. There aren’t many factories or men either, and there are various paths you can take to push Greece down different plans toward industrializing.

The democratic branch allows you to reform Byzantium

The military tree has another buff to forces like the very strong ones the Bulgarians get, but is more subdued, and only provides a buff to forces fighting in mountainous terrain. This feels more fair than a universal kick-ass buff like the one for Bulgaria, but still provides a strong and necessary boost to the Greeks, who will likely be in for a hard fight against at least one stronger power near them.

So: politics. Again, you’ve got the Four Paths, and like Bulgaria, these are decided early on by whether you get rid of your bad king or not. Keeping him will allow you to pursue Fascist or Monarchist ends, getting rid of him allows you to go Communist or Democratic (with a catch). The trees are mostly what you would think they would be, with options to either cozy up to powers of your alignment and join their faction or to go your own way. Interestingly, the Democratic branch is the one that allows you to reform Byzantium, though you can revert to Fascism at this point. 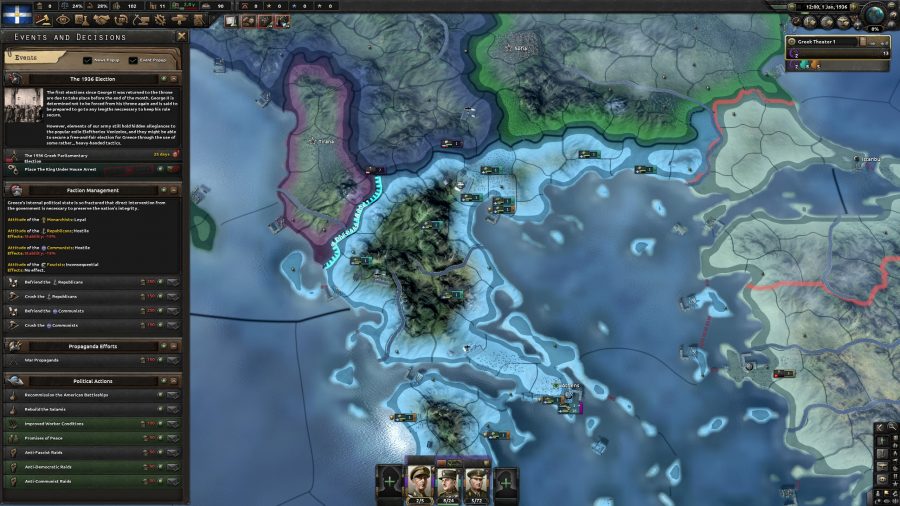 Notably, many of the paths involve a war with Turkey or Bulgaria, and similarly, those states have focuses for fighting Greece. Greece is in an interesting position though because they can invite Britain, France, and Italy to vote on what to do with Turkey. If the conference goes well, these states will join Greece in an attack on Turkey, which could prove a destabilizing force in the region.

Overall, I like these new trees, even with the hang-ups I have when Paradox decides to kick things up to 11. I feel that the focuses that have come out in La Résistance and Battle for the Bosporus point towards a desire to make HOI4 more of a sandbox, which doesn’t mesh super well with some of the earlier focus trees; it could be that these two DLCs can be seen as prototypes for the inevitable Hearts of Iron 5, unannounced and far off though it may be.

Expand your fronts: These are the best Hearts of Iron 4 mods

Battle for the Bosporus is a net positive on the game, though its existence points out some of the most glaring flaws with the older focus trees.

Planning to restore the Ottoman Empire or Byzantium is all well and good but is a moot point when you know the Soviets and Italians are going to come after you in every single game. As all of the above states have focuses that deal specifically with Italy and the USSR, here’s to hoping that they get an update soon.