One of the great disappointments of strategy gaming’s last decade was the cancelation of East vs. West, Paradox Interactive’s highly-anticipated attempt at a Cold War grand strategy title. Between the subterfuge, coups, and proxy wars, it seemed like the perfect era for a truly grand strategic experience.

Some of the team members who worked on that project would go on to create Terminal Conflict, but as far as Hearts of Iron was concerned it remained lodged in the Second World War. Luckily, as in so many things, mods may offer a solution.

Time and again, we've tossed heaps of praise onto the diligent mod community surroudning Paradox Interactive's WWII title, Hearts of Iron 4 – one of the most innovative and cutting-edge scenes in the wargame and strategy space. One of the most intriguing projects on the workshop right now is Cold War Iron Curtain: A World Divided – an incredibly ambitious attempt to transform Hearts of Iron 4 into the East vs West we have been waiting for.

We braved the time-shift from Hearts of Iron’s home turf of WW2 to give you the latest on this ambitious project. 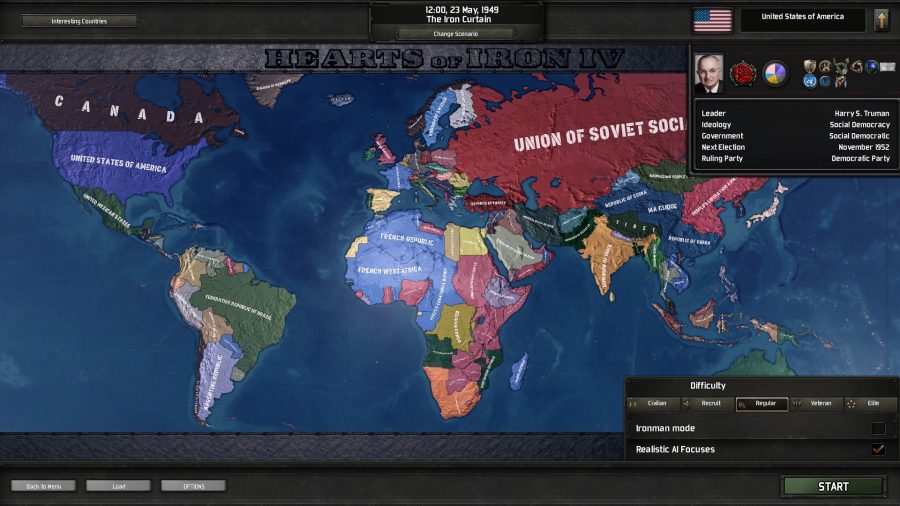 If Cold War Iron Curtain understands one thing, it’s that first impressions matter. The slow procession to the main menu sets a perfect mood of pumped-up cold war vibes: scanline-filtered period photos on loading screens, CCR’s Fortunate Son comes blaring through the radio. On that initial aesthetic impression, the mod heartily delivers. It comes full to the brim with custom period unit models to add a bit of flavor and an obligatory soundtrack of classic anti-war rock paired off against rousing Soviet orchestral anthems.

Clearly, a ton of work has gone into the look of the UI as well. It has a truly gorgeous looking background for the tech tree, and period-appropriate design for the menus, and Focus Trees icons. There are scanlines and CRT Screens galore. It ladles on the atmosphere thick and it works, with the sole exception of the map colors – which look a little too much like the bright paint-blobs of EUIV –  and the army-issue stencil fonts might feel aesthetically appropriate but are a bit hard to read zoomed out. Otherwise, CWIC absolutely nails the Cold War look and feel that it is striving for.

The mod has three start dates: 1949, 1960, and an unfinished 1973 option – with around 20 years of content for many of the major players of the Cold War. Each decade has its own set of branching Focus Trees, with obvious emphasis given to the post-war superpowers. The 1949 start date lets you get in on the action as the titular Iron Curtain is falling and the world is firmly congealing into two ideologically opposed blocs, while the other two dates let you deal with some set-piece crises like the Cuban Missile Crisis and the Vietnam War

In terms of features, it brings to the table a fairly complex resource management and economic system built specifically for the mod. There are new mechanics for tweaking the social and fiscal policy of your nation, more than a dozen new types of buildings, and a built-from-the-ground-up economic system that adds debt, GDP, investment, and resources into the otherwise barebones HoI4 economic system of civilian and military factories. 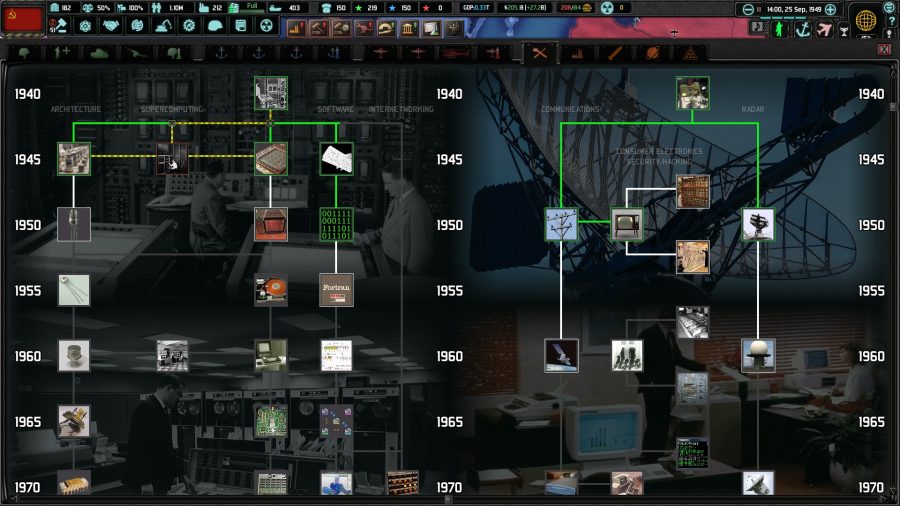 All that stuff is mostly gravy, though. The thing that seems really promising is the Influence mechanics that allow the Great Powers to influence smaller nations. Each nation has a level of independence from foreign influence that is determined by the size of its economy, with the smaller states much more vulnerable to the geopolitical machinations of the superpowers. Get enough influence over a state and you can force it to become a puppet and join your bloc.

Left cold? Try our guide to the best Hearts of Iron 4 Mods instead

With several – but not all – nations loaded up with fairly detailed National Focus Trees and dozens of period events firing off to help set the mood, it’s a fun jaunt through some of the major set-piece moments of the Cold War era. It’s clear that a ton of work has already gone into the mod but some lingering issues are worth addressing. 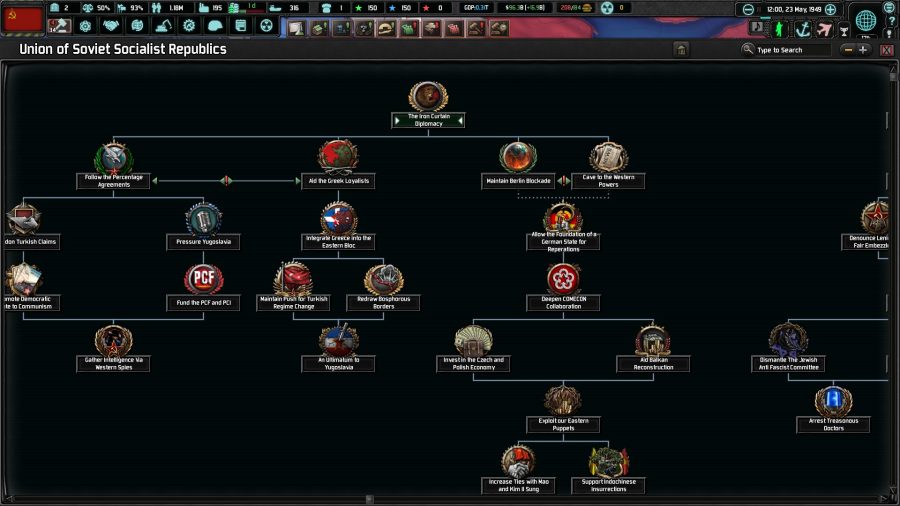 The mod is still in beta but is far enough along that its general shape is visible. The project is not without some looming issues. The problems I encountered with the mod can be divided into two broad categories: technical issues and structural issues.

The technical issues are not as serious, but I did encounter a few of them. The mod is fairly stable but did crash on me a few times. It never caused too much of an issue, but if you are diving in, it doesn’t hurt to save frequently.

The influence mechanic is promising but has rough edges

Some events will still fire off for people or places that no longer exist. For example, I received a bunch of events for the Tito-Stalin split, even though Tito had been deposed and updates on a Korean War that had long since ended. A bunch of events had some typos and weird symbols where special characters should be.

The very promising influence mechanic has some rough edges as well. Influencing other nations is tediously slow – requiring the player to spam the ‘influence nation’ button a few dozen times – or more. Some of those numbers will clearly need to be tweaked to make the process a bit more seamless. 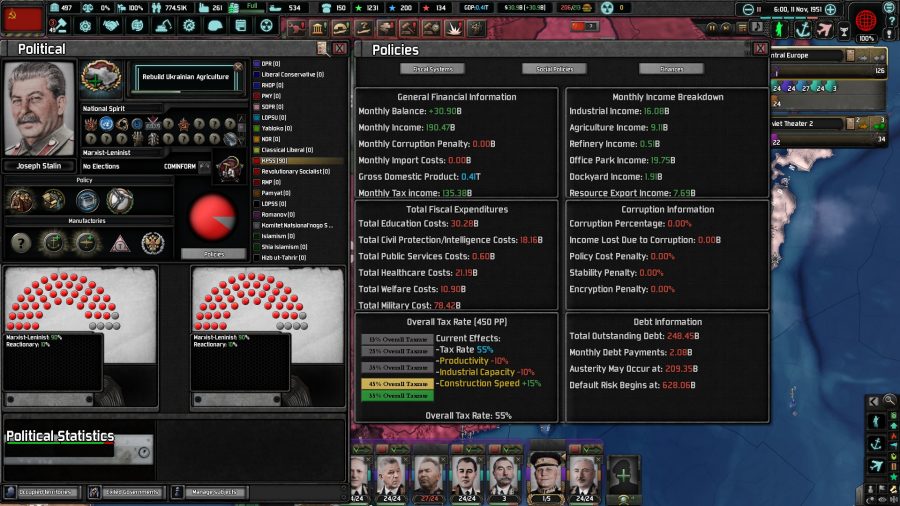 The structural issues, however, are a bit more serious and demand closer scrutiny. The first and most notable thing is that things can get pretty hot for a Cold War game. As the USSR, for example, I intervened directly in the Greek Civil War, dismembered Turkey after a Communist putsch, rolled Soviet tanks into Belgrade to bring Tito into line, choked the allies out of West Berlin, unilaterally annexed Eastern Austria into the GDR, and stormed into the Korean Peninsula with 50 divisions to push the Republic of Korea into the sea. In all these instances, the West did not lift a finger to stop me.

The full package: Check out our Hearts of Iron 4 DLC guide

So long as I did not directly cross the line of attacking a NATO nation, there was very little I had to actually worry about. World tension hit 100% around 1952, and what should have been the tensest moment of the game went by virtually unnoticed. No DEFCON alerts, no imminent threat of war. The nuclear Sword of Damocles never quite felt like it was hovering over me. 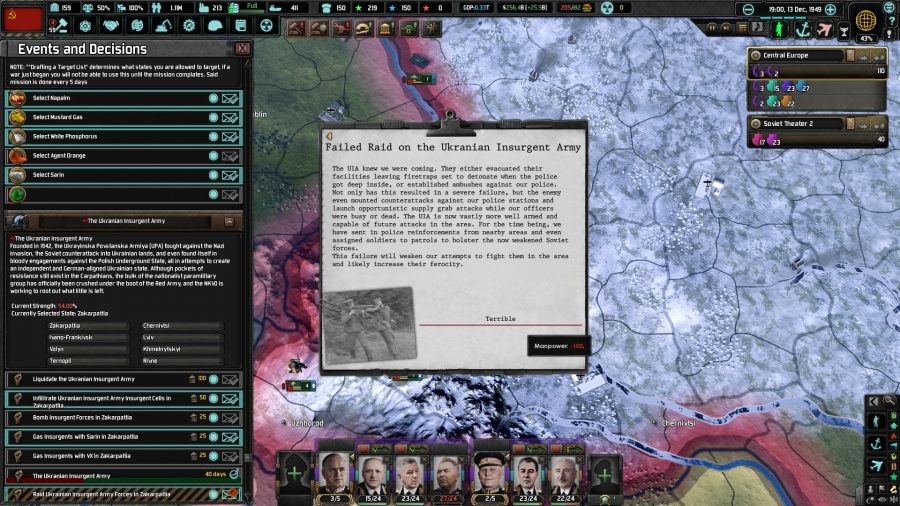 The mod also simulates a bunch of WMDs – not just the nukes the period is known for, but chemical and biological weapons as well – but there are not yet any ramifications for using them – which is troubling, to say the least. Apparently, a fairly robust United Nations feature is in the works that will hopefully mitigate some of these issues, but for now, the whole concept of mutually assured destruction feels a bit toothless.

Even after my rampage through the early 50s, as I consolidated my gains, I never quite felt the squeeze of combating the other side’s influence. Other than scripted events, Asia, Africa, and Latin America never quite felt like the battlegrounds they should have.

I found myself wishing the influence mechanics worked more like Victoria II’s Sphere of Influence system, where great powers use influence to play a game of tug of war. Even besides this, other than the ability to puppet nations at extremely high levels of influence (which happens only very rarely), there is not yet much direct benefit to pulling nations to one side or the other. 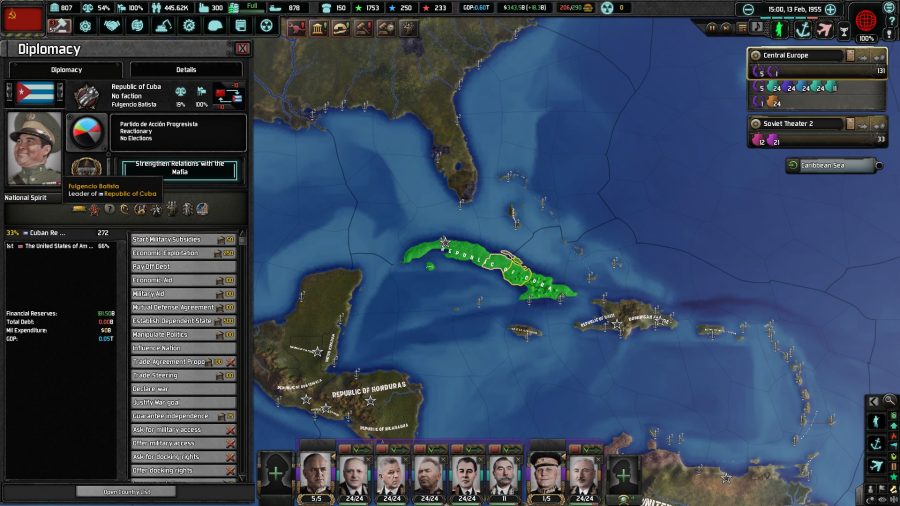 Part of the issue could be that unlike other Cold War titles – such as Twilight Struggle or the recent Terminal Conflict– it doesn’t center the USA and USSR. You can play as West Germany or France or China or South Korea – and each of these nations has a Focus Tree with branching paths. But why? Without a World War, or really any conventional conflict to participate in, what’s the point of playing a non-superpower?

Cold War games typically focus either on the geopolitical chess match between the superpowers or on a specific proxy conflict. By trying to do everything, CWIC may be unnecessarily splitting its development resources. It doesn’t help that HoI4 is, at its core, a grand strategy game about a very particular kind of large-scale conventional war. Because of this, it struggles to accurately represent some of the fuzzier conflicts of this period. As of right now, CWIC hasn’t yet found a way to get this square peg into the round hole. 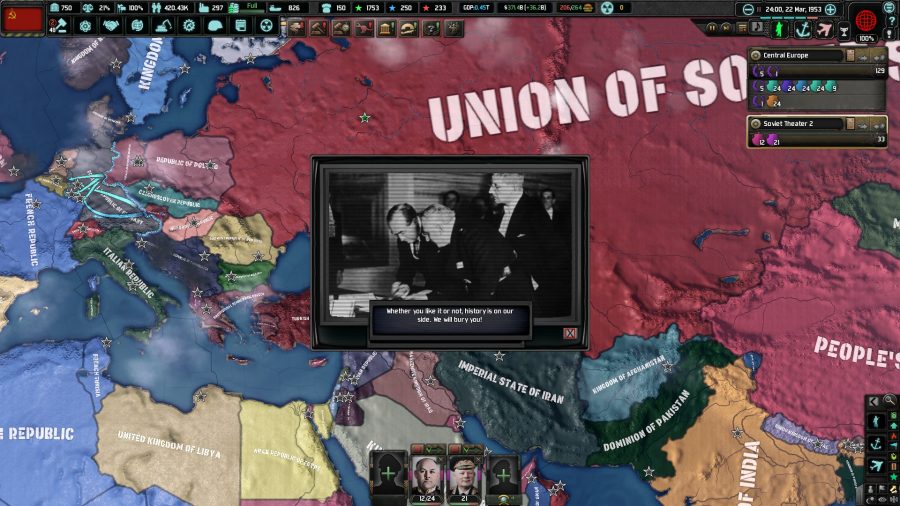 A few things could help remedy these issues: more focus on the superpowers at the expense of the smaller nations; more focus on subtlety and proxy war, rather than outright conventional conflict. It probably wouldn’t hurt to lean a little more on the more sandbox elements of HoI4 that have fallen by the wayside – things like improving diplomatic relations, raising party popularity, and backing coups. All that non-kinetic stuff that paradox forgot about after launching the game seems like it would be the right fit.

As it stands, the mod has taken on a daunting and ambitious task: taking a game that depicts the most archetypal hot war and transforming it into a cold war simulator. It might be too much for the system to handle, but, then again, more ambitious things have been pulled off by the HoI4 mod community. While it’s not quite the East vs. West we might want just yet, there is the nugget of an excellent Cold War game in here somewhere. Hopefully, by the time it gets to a full release, it will be there.

Like what you see? You can purchase Hearts of Iron IV and download Cold War Iron Curtain: A World Divided right now.