In the past few years, Hearts of Iron IV has distinguished itself as having one of the most vibrant and creative modding communities out there. We’ve written about this scene for a bit now, from The End of a New Beginning’s ambitious attempts to build a substitute Victoria III, to deep dives into fan-favorites like Kaiserreich. But there is a new contender on the horizon, with the polish to stand with the rest of the greats: The New Order: Last Days of Europe.

The New Order is a mod that asks that most dark of alternate history counterfactuals: what if the Axis won the Second World War? While that scenario is pretty well-trod ground, the mod approaches the material in a way that interestingly critiques some of sci-fi’s most stubborn tropes. Plus, after years in development, it comes packed with a lot of content – thousands of original events, focus trees, and what surely amounts to a novel’s worth of text.

Two things make The New Order immediately stand out from the crowd. The first is its gorgeous visual aesthetic. Boot it up and the first thing you’ll see is the title screen distorted to look like the slightly bulbous fish-eye of a cathode ray tube television. The UI uses a strikingly bold neon blue, while tech and equipment images are drawn in an old-school vector graphics style. The gentle ocean hues and contrasting national colors of HoI4 have been replaced with a pallet of midnight blues and moody greens that create an atmosphere of perpetual night. The effect is an entrancing world of gloomy cassette futurism.

Eagle-eyed cartographers will also notice something amiss on the map. 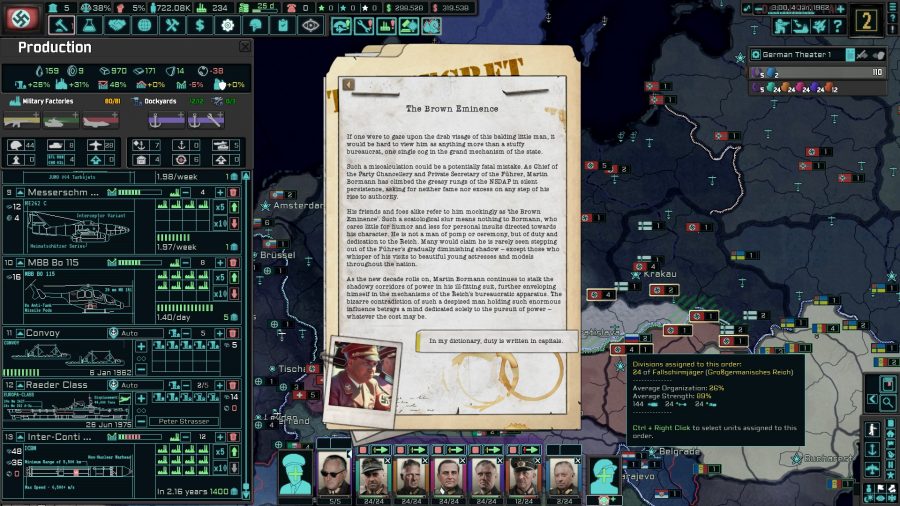 In an inspired bit of environmental storytelling, Italy looks as though it’s fused to the Balkan Peninsula. The Adriatic has vanished. Sardinia and Corsica are a single island. Scroll lower and you’ll notice that a vast lake, like a bullet hole, is torn through the heart of Africa. Lake Victoria has swallowed much of the Congo Basin. Taken together, the visuals immediately create the impression that something has gone terribly wrong here.

A new economic panel allows you to fiddle with debt, GDP and spending splits

The other thing that makes The New Order stand out is its heavy narrative focus. This is a mod that is, first and foremost, concerned with its story. Between events and flavor text, it’s not an exaggeration to say that you will spend as much, if not more, time reading as you will playing. Many events are so wordy they threaten to spill out of their UI windows. With such a single-minded focus on narrative, the mod brushes up on the genre boundary between grand strategy and outright visual novel.

Many of the generic HoI4 systems, such as peace conferences and almost all the built-in diplomacy options, have been ironed out of the experience. Instead, the “plot” is run through the National Focus and decision menus. While the construction and trade tabs have remained largely untouched, an entirely new economic panel has been added that allows the player to fiddle with new features like debt, GDP, and civilian/military spending. 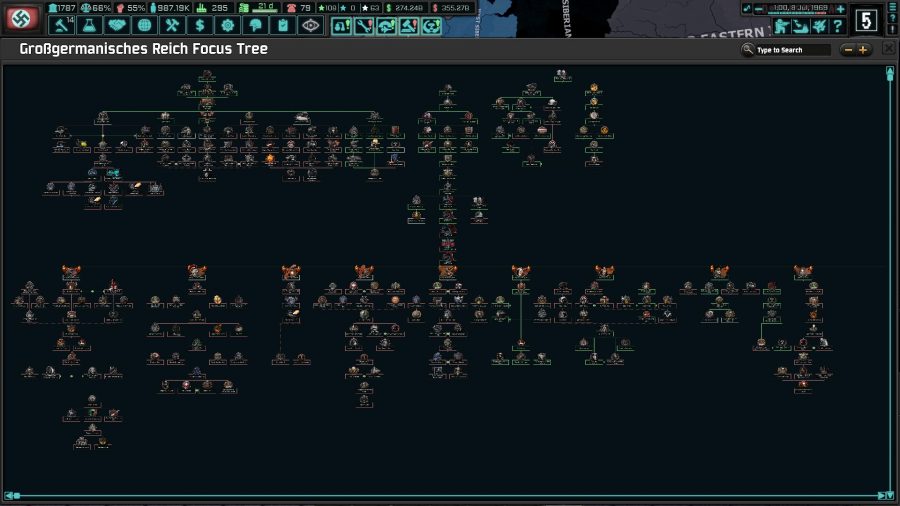 What this means is that The New Order is an exceptionally curated experience, less a sandbox and more of a guided tour with branching paths. That is not to say that there are no choices to be made, but the big decisions are streamlined, the game’s frayed edges tucked away. Some players, especially those who enjoy the nitty-gritty simulation aspects of Hearts of Iron, may find the mod too restrictive.

The Old Order: Read our guide to Hearts of Iron 4: Kaiserreich

But the writing is strong enough to make the experience worthwhile. The developers have packed a ton of lore into the game in what was clearly a laborious development process. The mod’s setting is deeply uncomfortable to play but is also incredibly compelling. 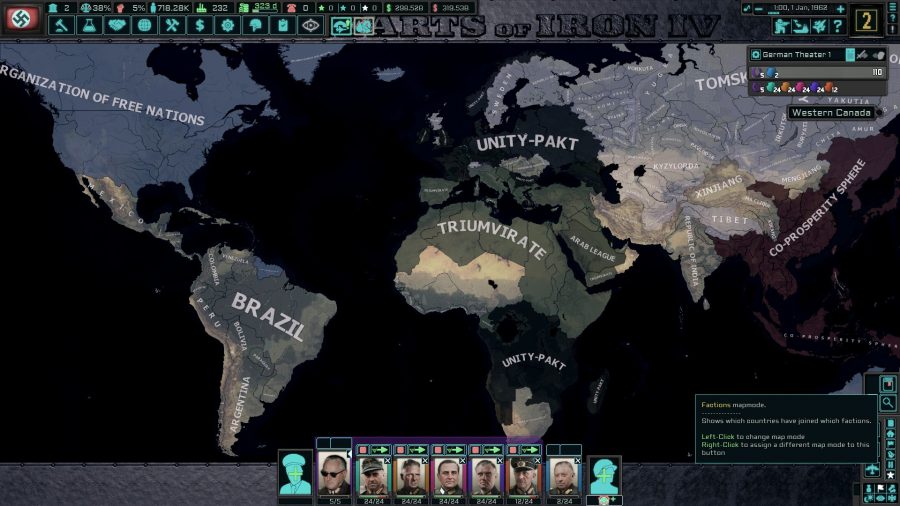 In the world of The New Order, the jackboot lies heavy. The year is 1962 and Greater Germany controls a seemingly unstoppable empire. A string of protectorates stretches from the British Isles to Western Siberia. Sub-Saharan Africa has been reorganized into three massive colonies. France has been vivisected. Himmler’s SS have their own playground, the Order-State of Burgundy – a rogue, Orwellian shadow-state in which the Nazi’s most fanatical adherents hold sway.

South of the Reich, Italy’s resurrected Roman Empire spans much of the Mediterranean. Mussolini’s successor heads an anti-German bloc – the Triumvirate – with Turkey and a united Iberian Peninsula. Japan, the other major Axis victor, reigns supreme across Asia at the head of its Co-Prosperity Sphere.

The United States leads the remnants of the Allies in the Organization of Free Nations, a kind of funhouse mirror NATO, to combat the German-lead Unity-Pakt. In the wastelands of Siberia, the Soviet Union has imploded and what was Eastern Russia is now a patchwork of warlords and despots, all scrambling to seize control of the rotting carcass of the former U.S.S.R. 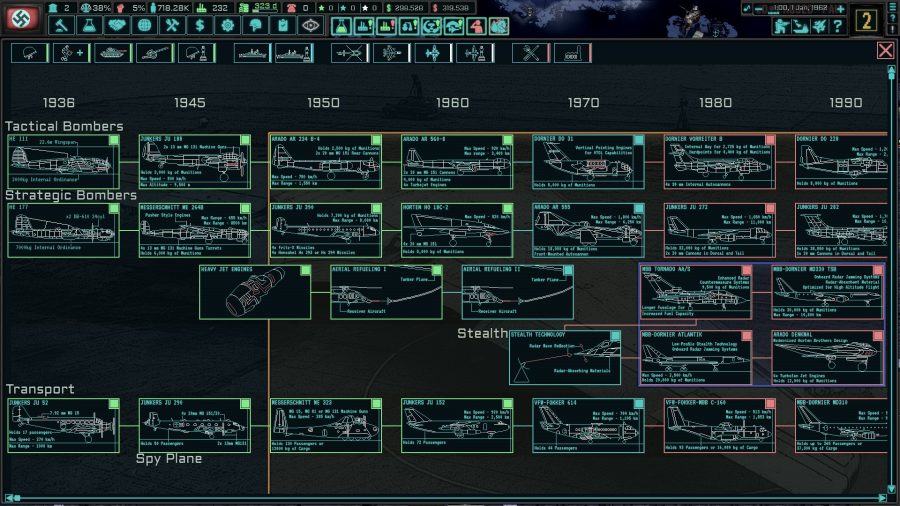 But for all its seeming dominance, all is not well in the Reich. Economic stagnation, environmental catastrophe, and factional politics have left Germany dancing on a razor’s edge. What makes The New Order so fascinating is the way that it uses its setting to critique one of science fiction’s most pernicious tropes. When alternate histories portray an Axis victory, they often do so by presenting a techno-fascist dystopia that, while brutally unpleasant to live in, also contains technological wonders that democracies could never hope to create – what with their rule of law and respect for human dignity.

The trope has been a mainstay in gaming since Wolfenstein 3D introduced a cartoonish mechanized robot Hitler. Philip K. Dick’s novel The Man in the High Castle is the progenitor of this trope, and its legacy is the one that The New Order is most clearly wrestling with. It lifts plot elements (the damming of the Mediterranean, the use of rocket expertise to go to space, the war-winning creation of an atomic bomb) directly from the novel, but with a twist. 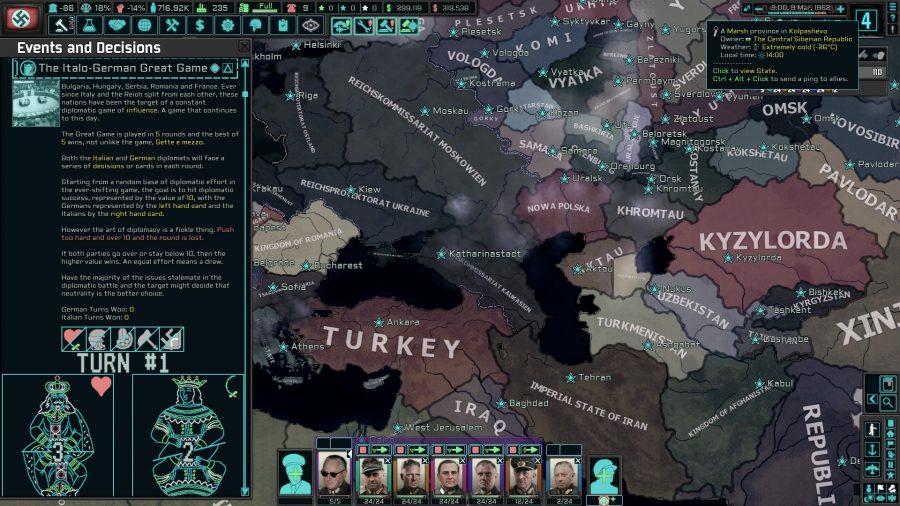 Unlike in Dick’s novel, in The New Order Germany has failed on virtually all fronts. Its attempts to dam the Mediterranean have resulted in an ecological disaster. It has landed a man on the moon, but the resulting space race has drained resources from a stagnant economy. Rather than conquering the United States, Germany has found itself mired in a Cold War with both its former allies as well as its remaining enemies. As it turns out, fascism doesn’t make the trains run on time.

One could be forgiven for not having the stomach for such a depressing scenario in, of all years, 2020. I almost didn’t. Playing it occasionally made me queasy and uncomfortable. Grand strategy is, by its very nature, grand – national in its scale, far outside the scope of individual stories or personal tragedy. But even still, the tight writing, gorgeous visuals, and high level of polish make this mod stand out, even in a scene saturated with excellent fan-made content.

The New Order: Last Days of Europe has over 80,000 subscribers, and is fully up to date with the latest patch.