ICBM was developed by SoftWarWare, and the second game to be published by Slitherine under their K-Project developer fund. A spiritual successor to the classic, DEFCON, ICBM is a strategic level real-time strategy game of nuclear destruction. You research nuclear related weapon technology, build up a nuclear stockpile, and use ships, planes and missiles to strike at your opponent’s cities whilst protecting your own. It offers some interesting (yet light), strategic gameplay, an intuitive UI and some clever design choices that help minimise micromanagement.

My only gripe with the game is that it lacks depth, with its nuclear war theme feeling like a one-trick-pony. In fact, ICBM is so narrowly focussed on nuclear war, that it feels one dimensional when compared to other strategy games.

It’s not just ICBM’s limited scope: The game leans so single-mindedly on the nuclear Armageddon trope that I’m left wondering whether people’s interest will quickly fade once the nuclear war gimmick wears off. For me, that was about six hours-worth of gameplay. By the time I had played ten hours-worth of ICBM, I felt as though I had seen everything the game had to offer. I racked up some more playtime for the purposes of this review but going forward, I don’t feel inclined to play the game outside of the odd multiplayer match with friends.

ICBM has two phases; Phase one focuses on building up your nuclear assets. Phase two is nuclear Armageddon. There’s nothing in between and each playthrough unfolds in the same formulaic way. The first phase lasts until the first nuclear warhead is launched, although you can also define an ‘enforced peace period’, the length of which can be configured before the match starts. But once one superpower pushes the proverbial ‘red button’, every nation has to quickly join in the nuclear mayhem if they want to win. 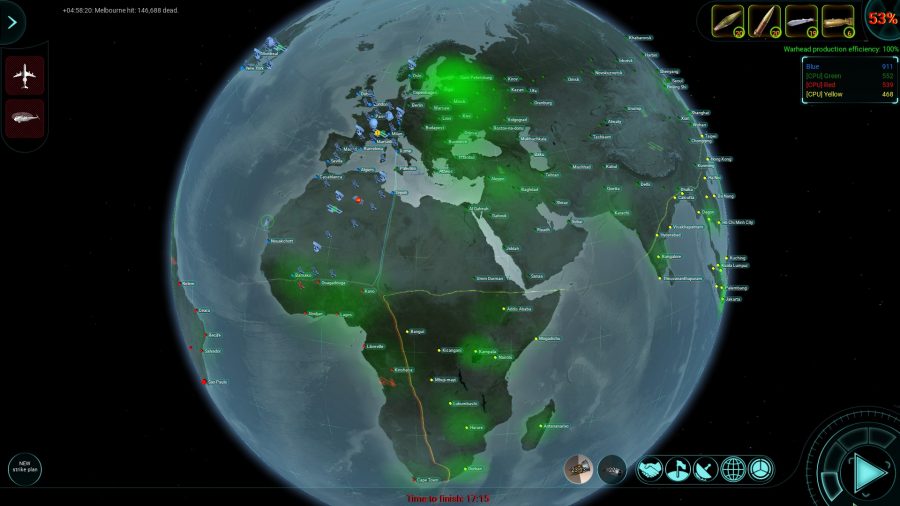 This is due to the game’s scoring system which is based around inflicting as many casualties as possible on your opponents, within an artificial time limit—one that is triggered when the world’s pollution levels (produced by nuclear fallout), reaches a certain percentage. Both the percentage of pollution needed to trigger the countdown timer and the length of the timer itself can be changed in the pre-game configuration settings. When the countdown timer expires, the game ends, the scores are tallied, and a winner is declared [I’m not sure ‘winner’ is the right term – Ed.]

ICBM is not attempting to represent historical or contemporary geopolitics

It is quickly apparent that ICBM does not play out in a conventional strategic wargame sense. It’s not attempting to represent historical or contemporary geo-politics—although there is a Cold War map scenario available. Instead, ICBM draws upon elements of competitive multiplayer games wrapped in a light strategy game shell.

There are multiple scoring systems that can be configured at the start of each match—all based around inflicting casualties and minimising losses. Each match has clearly defined phases, triggers, timers, and multiple playthroughs can be completed in one sitting. The result is that the game lacks the feeling of a military campaign or sandbox experience as can be found in more traditional strategic wargames. 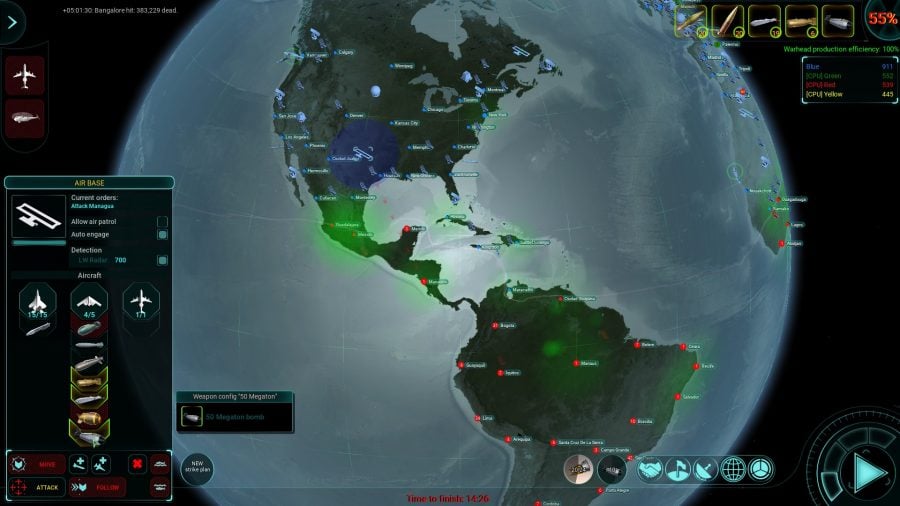 With that said, ICBM will appeal to gamers that like multiplayer and competitive style PvP games. And once you accept ICBM for what it is trying to be, it is a lot of fun. Indeed, the lack of depth is a net positive when playing ICBM in a real-time multiplayer environment. Because it makes the gameplay manageable without constantly reaching for the pause button. Consequently, I feel more comfortable recommending ICBM to people who intend to play it purely for the multiplayer, especially PvP. As for those looking to play this as either a single player experience or a straight strategy game, I am much more reserved in my recommendation.

Regardless of playstyle, there’s a lot to like in the actual execution of ICBM. There are some clever design choices that help mitigate micromanagement—the most notable being the ‘strike plan’ system. Strike plans, when activated, allow you to instruct the AI to attack specific factions, prioritising targets and designating which military assets participate in an attack. You can tweak things such as range, synchronise attacks and replenish warheads by automatically adding replacements to the production queue. It’s a surprisingly flexible system without being overly complex. 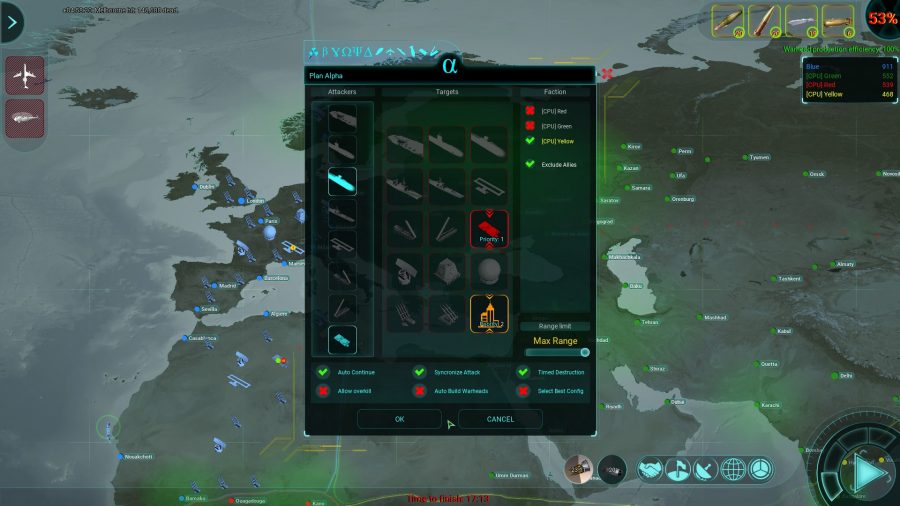 The result is that when nuclear war does kick off, you simply select the plans you want to initiate, and the AI does the rest. It should also be noted that you don’t have to use strike plans if you wish to coordinate attacks manually. And even if you do take the manual route, the UI is clean and easy to navigate, making the experience easy and efficient. Click on a silo, airfield, aircraft carrier or submarine, click the specific warhead/missile you wish to load and left click a target.

There’s no one dominant strategy; techs and units feel balanced

The tech tree is another strong feature of the game and offers players multiple strategies each playthrough. You can focus on developing stealth technology to circumvent enemy missile defence systems. You can focus on defensive techs to try make your missile shield impenetrable. There are satellite techs to spy on your opponents. Star Wars-like initiatives to destroy nuclear warheads whilst they are in space. And since you don’t have the time to research everything in a single playthrough, you need to specialise in a few areas. It didn’t feel like there was one dominant strategy and both techs and units feel fairly balanced (though this is a subjective observation). But there is certainly a feeling that each technology has a counter which lends itself to an engaging game of cat and mouse.

There is a light espionage system, which shows you who is researching what and you can steal technology from your opponents. A diplomacy system that amounts to a join/leave alliance button and a voting mechanic—with options for allies to vote on sharing technology, military asset locations and radar information. There are no peace options, no ceding of territory, no occupation of territory, and the eight superpowers (geographically convenient blobs as opposed to logical groupings of like minded political nations), are in a state of perpetual war. 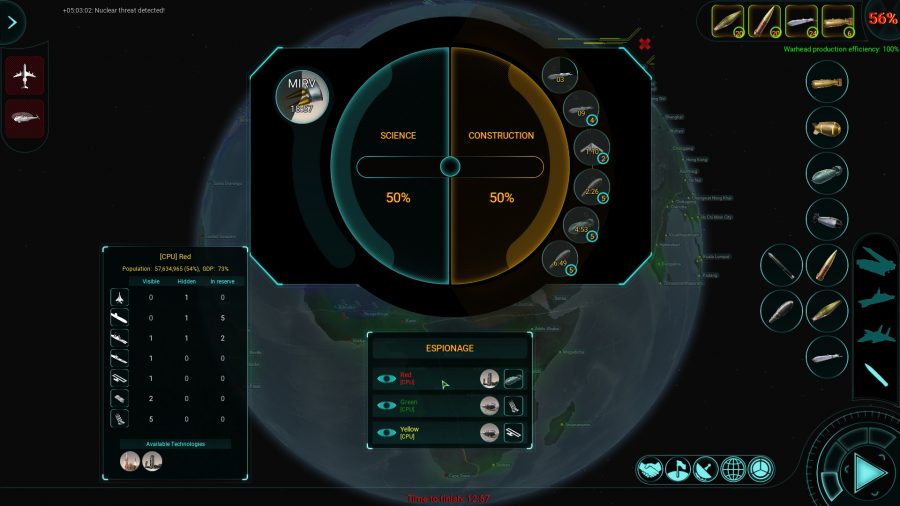 Setting up and joining a multiplayer match was straightforward. As for bugs, there wasn’t anything significant to report—two odd crashes to desktop and a connection issue during a multiplayer match. In all, it’s a very stable game. Finally, it’s worth mentioning that there is modding support (including Steam workshop integration).

ICBM does what is advertised on the box. It’s an RTS about nuclear annihilation, designed with PvP in mind. It delivers a fun (if light) strategic experience. However, those looking for a more traditional strategic wargame will be disappointed. ICBM’s narrow focus on nuclear war and its competitive PvP gameplay, lacks the depth of other strategy titles. I’m also not sure there’s enough here to keep gamers engaged long term—especially once the nuclear war gimmick fades.

For all of ICBM’s good aspects and good ideas, there’s just not much depth to it all. If you are interested in PvP multiplayer I think you will get some fun out of ICBM. Solo gamers should exercise caution.

Read the whole review but still don’t own the game? Why not pick up ICBM now.