One of the neat things about Wargames Illustrated magazine (WI), for whom I do write on occasion, is that it publishes free miniature wargaming rules to advertise small firms or up-and-coming authors. So it was just a month or so ago with Andy Callan’s Never Mind the Billhooks (NMB), a small battle game covering the Wars of the Roses.

Folks who subscribe to WI got the rules free. For others, it remains downloadable from the WI Website for a mere £6.00 in PDF format, although if you opt for the professionally-manufactured card deck it will cost you another six.

The game is made for 28 mm figures individually based, something I have zilch for in this historical era. Not to worry. I do have  a veritable ton of unpainted and unbased 15 mm Minifig Wars of the Roses figures (Knights, Gothic Armor, Lance, things like that) and substituted two of these models for one of the larger figures on each base. Worked like a charm and I actually like the look better because I’m a massed troops kind of a guy.

That’s if they were painted of course – which is why no personal images here – but they gamed very well indeed. 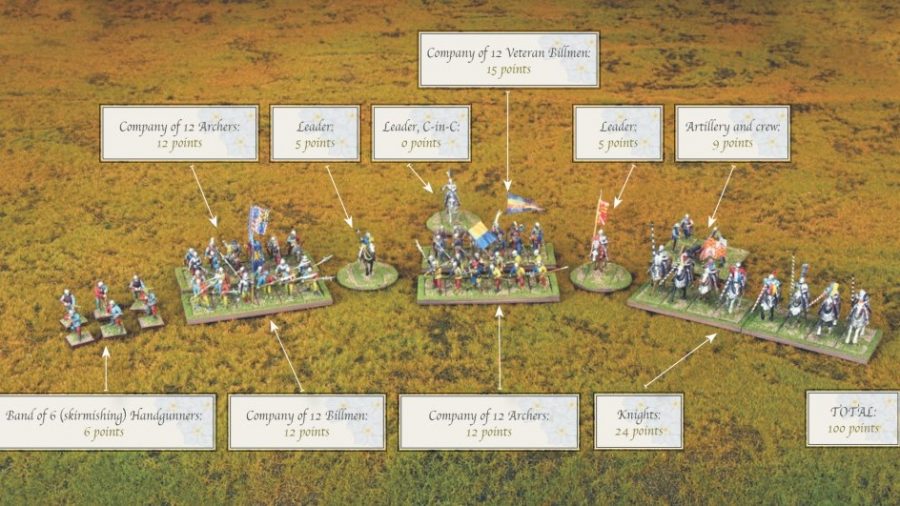 NMB is 24 pages of full-colour glossy goodness, plus another eight pages of cards to cut out and print, plus a single, one sided crib sheet. With only a page of charts, you likely think this is a simple set of rules, and you would be right, but online support is exceptional. The WI Website offers free downloads for things like a full color FAQ Sheet to start, a complete painting guide and a whole lot more. Videos? Absolutely!

There is no set time, ground or figure scale

The game itself is designed for opposing armies of 100 stands (ie, 100 28 mm figures each) to produce small games that two players can finish in about two plus hours. While the author does warn against trying to replicate some of the larger battles of the war, having multiple players per side with about 200 models each seems imminently doable. Callan also notes the system should fit the Italian Wars, the Burgundian conflicts and the 100 Years War with little to no modification.

There is no set time, ground or figure scale for NMB, a concept that seems in vogue in the UK for some reason, but one that if I am any example, drives us Colonials (really guys, we’re sorry for Yorktown – absolutely bonkers). Units include leader stands (usually three per player), six-stand light infantry Bands, 12-stand infantry companies such as pikemen or billhooks, eight-stand horse Squadrons and finally artillery sections with one-gun and three-crew stands. Further, two infantry Companies can combine into either a side-by-side Line or one-behind-the-other Block formation to count as a single unit for issuing orders. 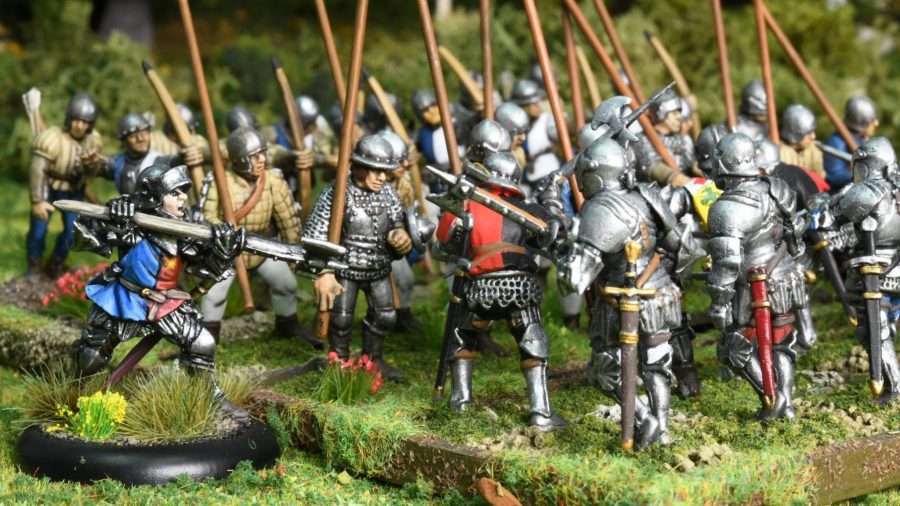 All of this is organized on a point system a la Ancients gaming with quality of troops (Levy, Retinue or Veteran), their weaponry and armor all modifying the final number. For example, a Knight costs three points per figure, but you add three more points if the chap is Veteran status, for a total of six. Leaders are evaluated as Hero, Commander or Dolt (love that word) and this rating will signify the number of units they can order around each turn. It also indicates how many wounds the leader can take before he is dead, with three for a Hero, two for a Commander and so on. Generally, each leader commands one of the three Wards (center, left and right) of a player’s mini-army, with one leader doubling as overall commander.

Wrapping up the player’s forces are a set of circular tokens, one set for the House of York and the other for the House of Lancaster. Some are Order Tokens (more on that below), tokens to indicate varying degrees of disorder (Disarray and Daunted) and the very important Morale Tokens which are assigned one per unit to each army. Also necessary are three included card decks and at least twelve 1xD6 dice per player. Both fire and melee combat in NMB are pretty standard, ‘Old School’ stuff, so I’ll cover that first and do so briefly. Remember those 12 dice? Good. The concept is when attacking an enemy formation, a die is rolled for each stand in the unit twanging bows or cleaving heads. Depending upon several factors such as range, cover and armor type, a Hit is scored for each die that rolls high enough. 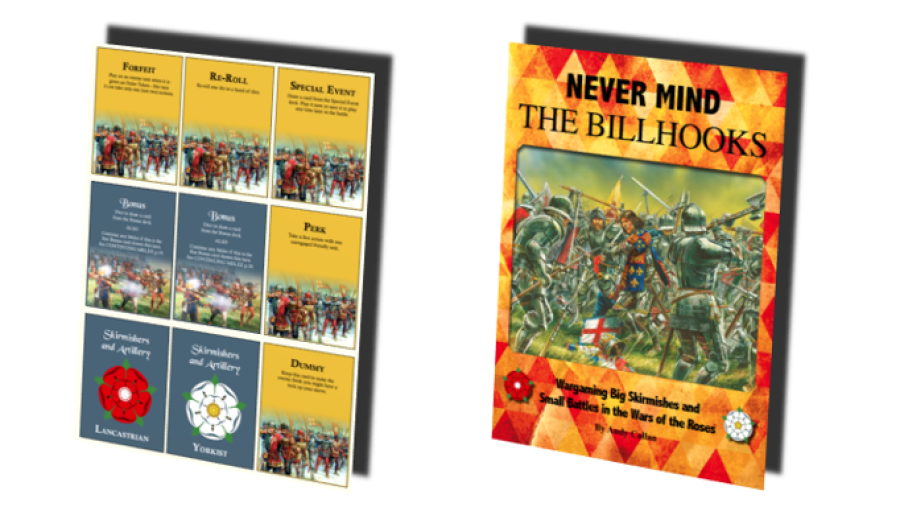 For example, archers have a Short Range of under nine inches and a Long Range of 9 – 15 inches. For a die to cause a Hit, a five or six must be thrown for Short Range whereas only a six will suffice at Long Range. On the other hand, these missile-chuckers only use half the number of dice if they are Disarrayed/Daunted or firing at a Skirmish formation. The target gets an ode to Dungeons & Dragons saving throw for each Hit taken, with only a die roll of one or two confirming the Hit as a Kill for armored men-at-arms and the like. Kills remove the stand from the unit in question. Close combat works essentially the same, and if casualties are taken, morale tests and/or retreats soon follow.

Otherwise, in NMB there is a pre-game Manoeuvre Phase. In this phase, the two opposing players alternate moving one unit at a time until one unit moves into contact with the enemy (and thus triggering automatic close combat) or a unit announces it wants to shoot at an enemy formation as described above and below. At this point the Manoeuvre Phase is over and general play turns begin. Note that, in the Manoeuvre Phase, it’s perfectly legit to move the same unit more than once. You could move a company of billhooks, the enemy move a squadron of horse, then you could move the same billhook gaggle again. Remember care must be taken, however, because once some sort of contact is made, this pre-game movement stops.

Now we see what really makes NMB shine IMHO, the three included card decks. One is a general Play Deck which contains a Leader Card for each of the three commanders on each side of the battlefield for a total of six. It also contains one Skirmish Card each for York and Lancaster (total eight so far) and two Bonus Cards (for 10 total).  The deck is shuffled, and a card is drawn. If the card is a Skirmish Card, the owning side gets to perform battle Actions with ALL his skirmish forces. When a Leader Card is drawn, the units of that Leader only may receive orders and perform battlefield Actions, with each formation allowed two per turn such as Move, Wheel, Rally or Shoot. 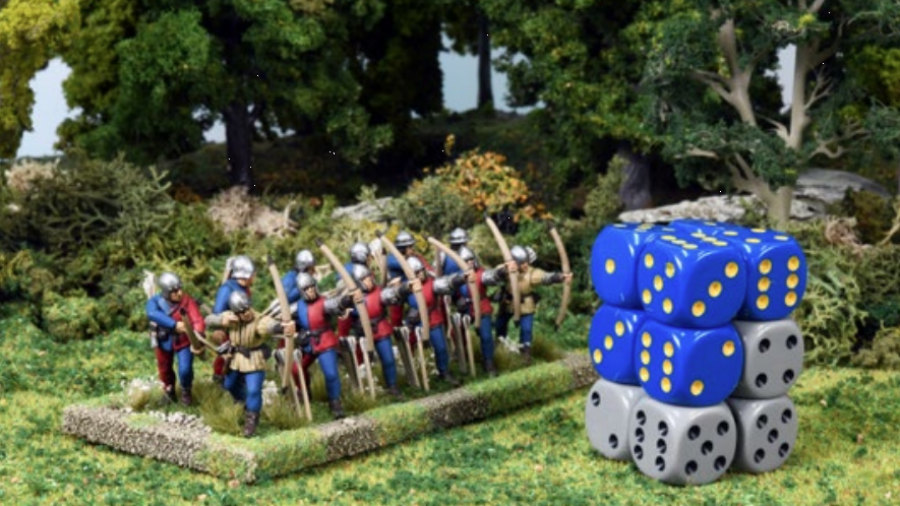 If a Bonus Card is drawn, the two opposing players dice off to see which one of them gets to use it and draw a card from the Bonus Deck. A Bonus Card may be played immediately or may be retained for later use, and include such goodies as a Forfeit Card which is played on an enemy formation and reduces its number of Actions from two down to one that turn. Another Bonus Card sends the player to the Special Event Deck where a card drawn might indicate a free resupply of arrows for one friendly archer unit. The turn ends when all cards have been drawn from the Play Deck except the last one. So, what happens if that last one remaining happens to be your Hero army commander with the ability to issue orders to three units? Sux to be you.

Middle management: Explore our list of the best medieval games

A player achieves victory in NMB in one of two ways. The first is by killing the enemy army commander. The second is via the collection of Morale Tokens by way of a Morale Crisis test. Immediately or at the end of a turn some forces must take a Morale Crisis Test, usually because of an adverse combat result. While some units will pass this test, others could become Disarrayed, Daunted or Broken, the latter removing the unit from the board. For each enemy failure of Daunted or Broken, the losing player must present a morale token to his opponent, even if the bedraggled unit is still on the board. If by chance a player manages to Rally a Daunted unit, he can retrieve one of the morale tokens lost. Otherwise, when a player runs out of Morale Tokens to surrender to his opponent, his army disperses, and the battle is lost. Short, sweet, and it works. 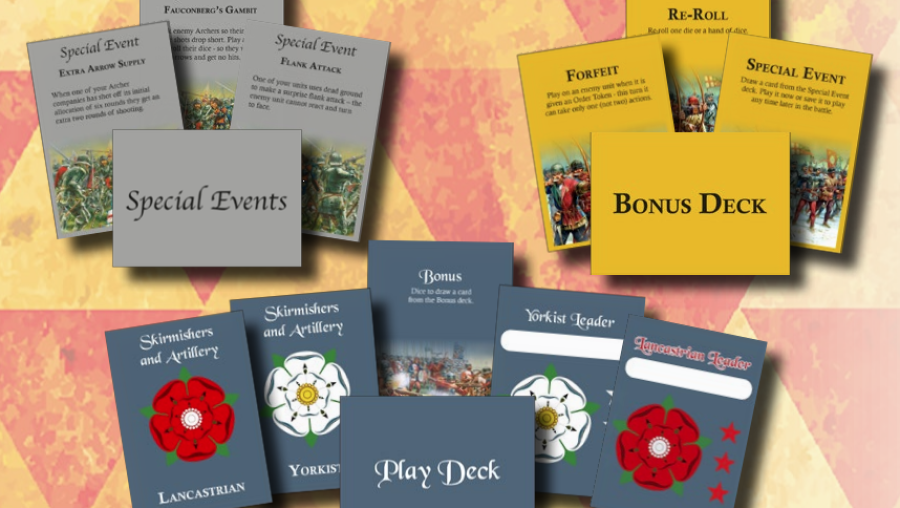 NMB plays as advertised, very easy to learn, easier to play and only a couple of hours needed for two decent players. However, I was impressed that although a whole lot less than complicated, NMB produced both gameplay and results that seemed authentic to the historical period it covers. As a retired soldier, I always lean towards games that are more chaotic and unpredictable because that’s the reality of war, even in 2020. Unlike what a lot of games portray, battle is not a precision, choreographed ballet with neat, clean alternating turns. Success in battle is far more success in managing chaos on the fly rather than detailed planning.

And in the Wars of the Roses, where formal command and organizational structures were but a gleam in someone’s eye and where unit drill based on developed tactics was but a fantasy? Gimme a break. This isn’t Rome. NMB portrayed this environment to a proverbial “T” in the four solo contests I played, certainly showing the need for up close and personal unit leadership by commanders, but not necessarily overall battle management. The way each game seems to reach a certain point then cascade rapidly downward for the losing side also seems in line with what I have read about warfare during this time. Don’t let its elegant simplicity fool you, NMB is solid history.

Besides, how could anyone resist a game named after a Sex Pistols album (Never Mind the Bollocks, really, no kidding) and uses Rock-Paper-Scissors as a game function. I know I can’t, and though I swore I’d not start painting another military era with my minis or (God forbid) buy more, here I am looking at Little Big Man Studios to see if they have flags to support such an endeavor. They do. Well, damn.

NB. Top photo from Perry Brothers, the rest from WI and NMB.