Sometimes you just need to settle in with a snack and do something comfortable. Perhaps something familiar, calming… paced. For the last week or so, that comfortable thing for me has been John Tiller Software and Wargames Design Studio’s latest Panzer Campaigns game Scheldt ’44. Mechanically JTS games and the WDS re-releases have been solid traditional hex and counter wargames, with their major selling point being detail.

These games are gigantic and cover their campaigns with the kind of minutia that you’d expect from an encyclopaedia. For that, I’m certainly grateful. JTS/WDS games often highlight less popular or recognizable battles and Scheldt ’44 does exactly that with a fine toothed comb that can leave you knowing more about a battle than before you started.

While the ever popular Market Garden is included, the main event is two massive campaign scenarios covering the capture of the Scheldt Estuary in October/November 1944, which allowed Antwerp’s deep port to be used to funnel supplies to the gargantuan Allied military machine. Along with these grand scenarios are numerous smaller and more easily playable operations covering interesting battles, most of which I’d never encountered before in a wargame.

The reclamation of Antwerp, aided by Belgian resistance fighters, or the capture of the channel ports by the 1st Canadian Army to name a few. 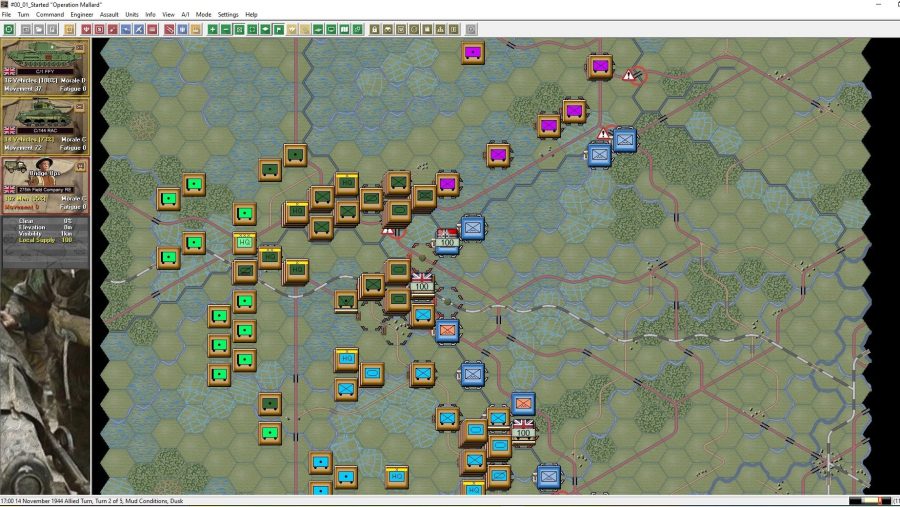 Gameplay functions much as it always has, so if you’re familiar with any other JTS/WDS games you know what you’re getting into. Hexes represent 1km and units are at the company and brigade level, so you’re taking an operational level of command responsible for manoeuvre and attack. Scenarios offer objective spaces and you and your opponent utilize the forces at your disposal to capture and hold these objectives.

Functionally, the gameplay is simple, and you’ll be ordering your soldiers about easily after going through the included tutorials. Clicking on a hex brings up the units positioned there. Highlight the unit or units you want to order around and give them the orders. Everything expends movement points, so managing how far a unit travels and what special functions it’s going to perform is part of the job, as is allocating fire.

I’ve found that I’ve come to rely on the AI fire resolution for most of the bigger scenarios. I position everyone where I want them to be, manually call down artillery and airstrikes, and then let the AI resolve close fire. Doing so means that you can functionally control large scenarios with little physical effort, and it helps throw a little wrench into the perfect control you would otherwise exert. 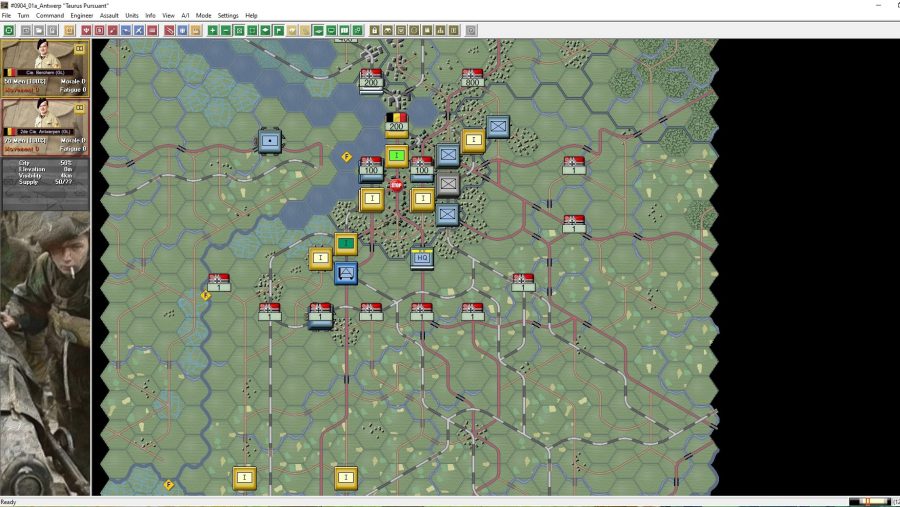 The system has been refined to an expert degree and you really get a good sense of mid-20th century warfare. From dealing with supply and morale issues, to coping with the hazards of terrain and night fighting, coordinating assaults and artillery bombardments… it’s all there and relatively simple to control.

Go to the hot place: Read our Afrika Korps review

Miring in the small battles within a giant campaign game can be half the fun. Cursing my engineers for failing to create a bridge in a timely manner or hoping the Belgian partisans can hang on to their corner of Antwerp builds tension in a wonderful, procedural way. 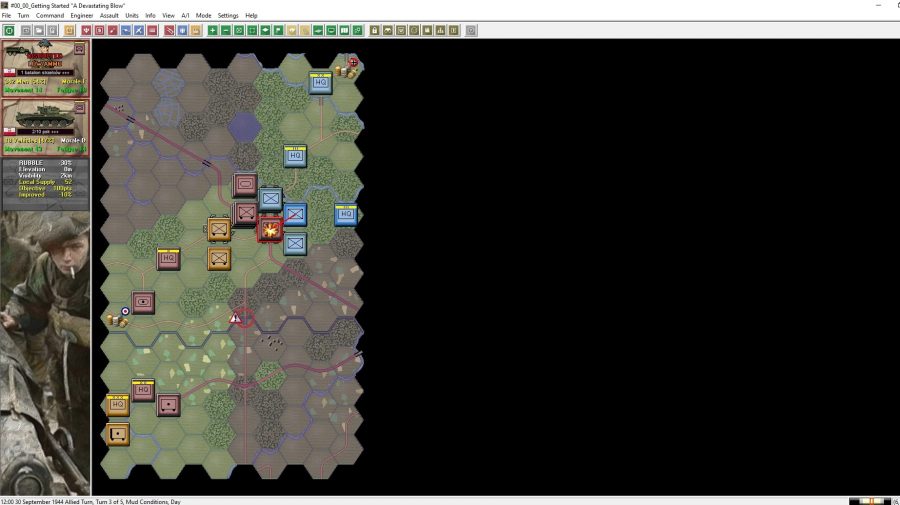 You’re allowed to really sink into the comfortable minutia of each of the represented battles, humming and hawing over what ifs and counterfactuals to your heart’s content while you try scenario after scenario. It’s begun to feel like a familiar book.

This entry is throwing some curve balls at players familiar with JTS/WDS games in the form of canals. Most scenarios are going to have you crossing or defending the plethora of canals that stretch across the Netherlands and Belgium. Your engineer’s amphibious vehicles are going to be a top priority when trying to break through into the Netherlands. 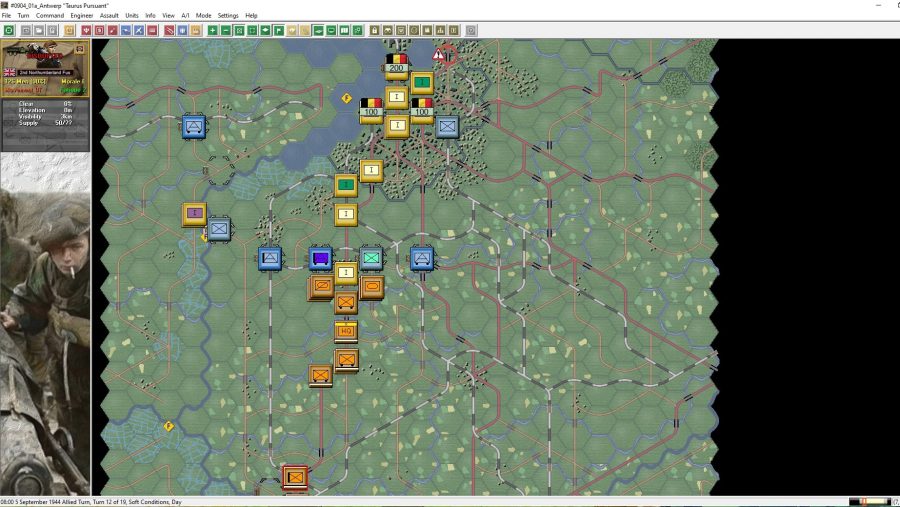 On the Axis side, players are going to have to deal with a variety of issues fronted primarily by the fact that by this time, and in this place, you’re not commanding Germany’s best. There are several scenarios made harder by the dregs of the Wehrmacht that you have under your control. There will be many scenarios where you’ll have to properly calculate where and when to defend against an Allied push.

Graphically, Scheldt ’44 has received an upgrade as the first Panzer Campaigns game to be rendered in JTS’s new engine. The change isn’t so drastic but is noticeable to veterans. I personally appreciate the redone terrain markers for things like trenches, minefields, and bunkers. There is also a third level of zoom and an updated isometric graphical setting for those who like it. But I’ll be honest, I spent very little time in that view, preferring the clean NATO-symbols-and-map look. That being said there are graphical images for every type of unit, with a few shared between infantry. All good stuff. 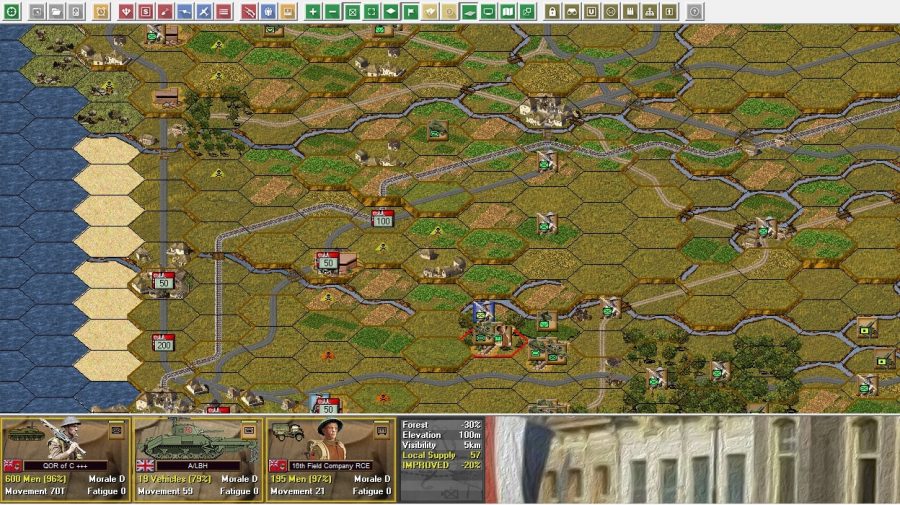 Hard counters: Try our list of the best war board games

It’s a familiar, comfortable gaming experience and should one take the time to learn just one of these games, the door is wide open for diving into whichever game’s campaigns interest you the most. JTS and WDS are, if nothing else, consistent in their quality.