Let’s face it, Warhammer 40K has always been about feeling young, energetic, and totally radical. It’s appealing to adolescents due to its totally over-the-top aesthetic full of explosions and machinery and mohawks and more explosions. Miniatures themselves are toys that bring us adults back to that magical time and let us reclaim our youth.

The problem is that Warhammer was never really a game for kids. With a stack of manuals that could fill a backpack, a ten year old isn’t likely getting very far even if they’re working two jobs and pulling a swanky allowance to fuel their new Ultramarine battle group. That is, until now.

Space Marine Adventures is a series that first launched in 2018. It’s a collection of two boxed board games that include everything you need to stretch the game to its limits. It’s not Warhammer proper. Rather, each is an independent tabletop design with its own ruleset attempting to tell a 40k-flavoured story. Several boxes are ticked, as there are space marines, Orks, Necrons, and plenty of dice-rolling. If nothing else, these games look like the real deal and capture the property’s unique visual stylings.

While the debut release, Labyrinth of the Necrons, was a solid introductory dungeon crawler, the newest entry is a more traditional tower defense structure. In Rise of the Orks you and up to four others are cooperating to repel an onslaught of greenskins who are assaulting a crucial shield generator on a war-torn planet. 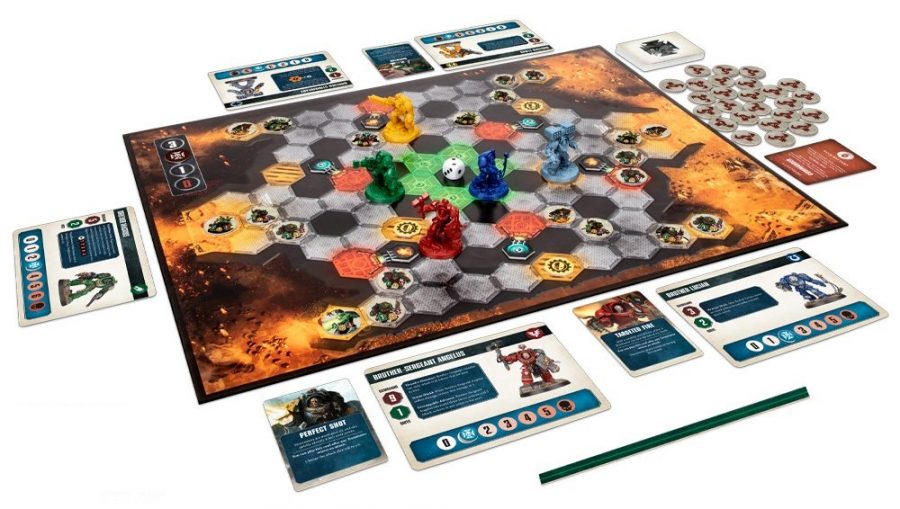 The ruleset is dead simple. You always play with the five mixed chapter marines, dividing them up between the players at the table. Each Terminator – yes, these are the big boys – can move and attack on their turn. And that’s it.

Flavor is presented through each unique character boasting their own attack options based on weaponry. So a Termy wielding a thunder hammer and shield will have different target numbers and effects than one with a flamer. This provides a small touch of variety as you explore the different options and assess new combat techniques.

The primary incentive to move about the board, beyond defending specific attack vectors, is the acquiring of supply cards. If you land upon specific spaces you draw a couple of cards from the supply deck and choose one to keep. These boosts can be tied to specific characters and allow for the more dramatic manoeuvres in the game. 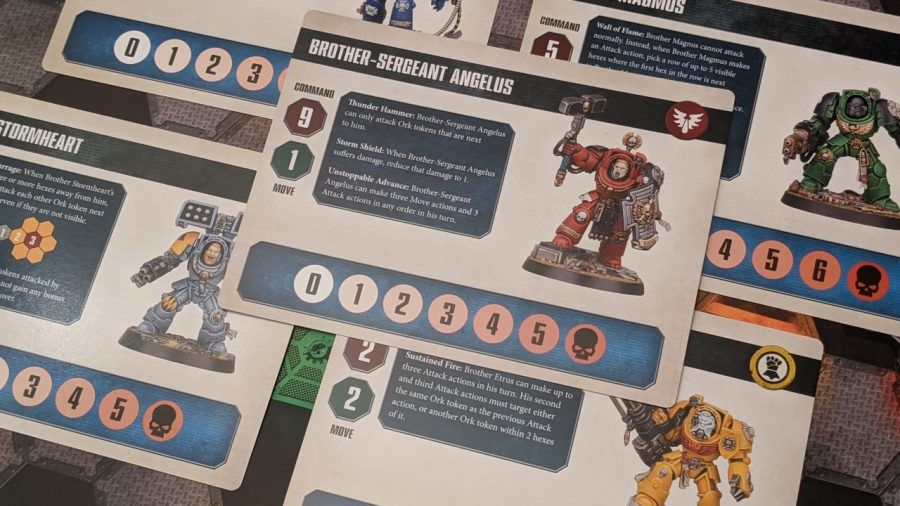 Enemies come in waves following simple procedural logic. There are a mix of Orks that include Nobs, Meks, and a Warboss. There’s a bit of variety in special abilities and stats even though they mostly behave identically. As the Orks funnel towards the shield generators you must quickly discuss as a group how best to spread out and cut off the invasion. Since the enemy movement and actions are telegraphed, the game can feel very much like a puzzle as you tease out your options and try to manage threats before they threaten to burst.

Know no fear: Here’s your guide to Combat Patrol boxes

There’s a tension in deciding how far to push out from the base. As your warriors get pummeled you will lose health and can even be knocked out. The only way to regain health is to trek to the center station of the map, which causes a nice friction in calculating risk and reward as you weigh your group’s overall strategy. This is the strongest aspect of the game as it brings a needed degree of excitement. 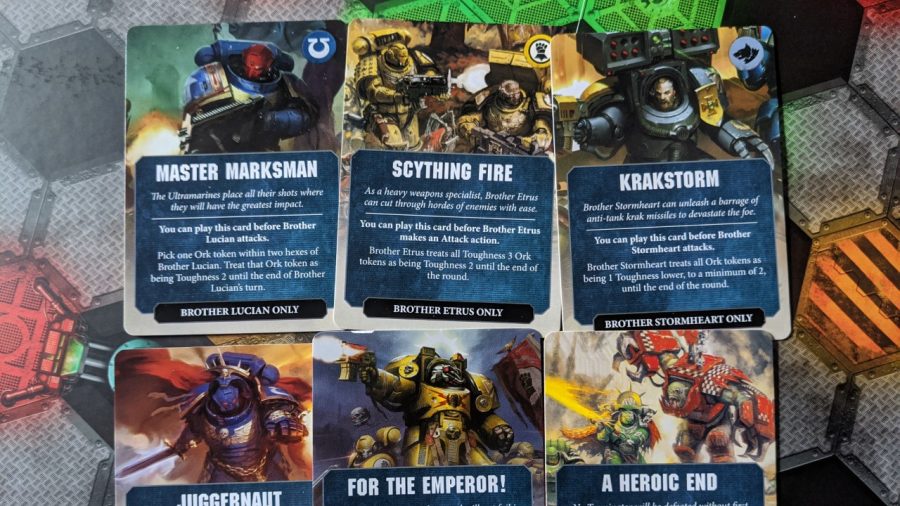 Overall this is a fine game that is mostly successful when viewed through the prism of its directive. It’s family weight, comparable to board games like Castle Panic or Ticket to Ride in its rule density, and it’s something you can absolutely enjoy with someone as young as six with a touch of guidance. Rules will stick and you can saddle them with a single character to focus upon while they are included in some of the decision making. The flavor is there in bits and pieces and they will latch onto the setting, preparinging them for that eventual day when plastic meets pavement and they get their grubby cheese-stained mitts on a 1,000 point army list.

The miniatures here are also focused on ease of entry as they’re push-fit and simple to assemble. You still need sprue cutters and a bit of patience, but the instructions are clear and easy to follow. As we’ve seen in the past, just because these miniatures don’t require glue doesn’t mean they’re cheap or soft in detail. In actuality, these figures slap like a Power Fist. The poses are dynamic and the edges crisp. They’re a joy to paint as well.

It’s also much appreciated that the miniatures are supplied in different colors. This is another indication of the target market as they don’t necessarily expect you to paint them. However, this is a quality of life consideration and allows for easy identification of the pieces, a trait necessary for those unfamiliar with the different chapter distinctions and weapon appearances. 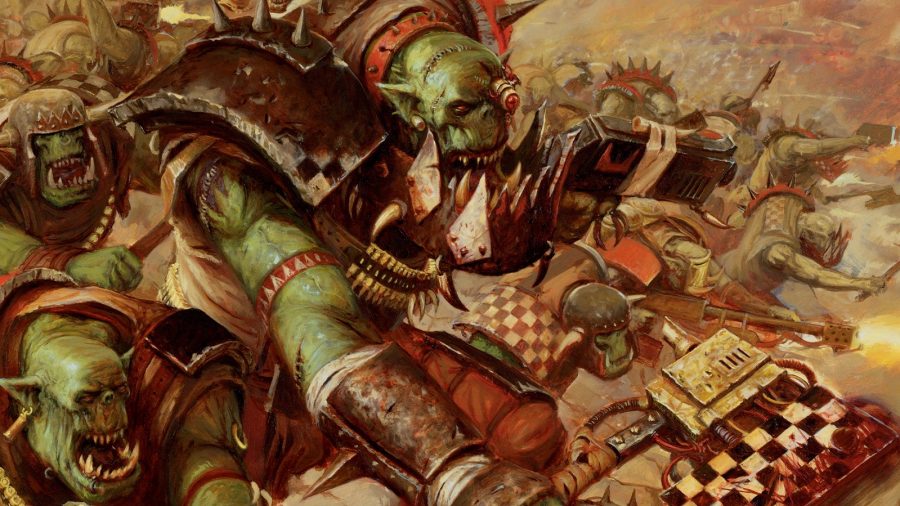 Of course it’s possible some may be disappointed to find the Ork horde represented by two-dimensional chits. At the game’s price point however it’s completely expected. This is a mainstream title aimed at a low barrier of entry. It’s also necessary to consider that the five Terminators are much higher quality than standard board game miniatures. No sacrifices were made in that regard and the Marines would fit right alongside your 40k regulars.

Skin in the game: Check out our Blitz Bowl Season 2 review

The only disappointment here is that Rise of the Orks is a step down from the previous entry. Labyrinth of the Necrons was similarly streamlined, but it possessed a longer tail with unlockable levels and more content to explore. As you progressed through the game you would discover new enemies and events as the story unfolded. The complexity of the ruleset grew slightly and it truly felt like there was something there to explore. This was a beautiful touch that extended gameplay significantly. 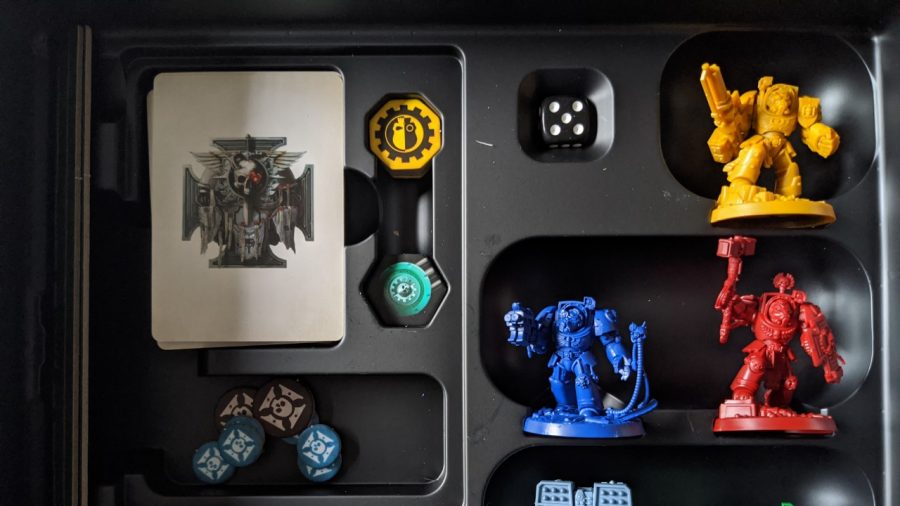 This release on the other hand feels a bit more shallow and grows repetitive more quickly. There’s still a simple joy here in playing with a group of young ones, but it’s not likely to entertain a hobbyist as a solitary endeavor or when embarking with a group of fellow crusty old men. The tactical situations are limited and most of the decision space restricted. Unfortunately this won’t have the enduring significance of Space Crusade or HeroQuest.

A lightweight family affair with a taste of a brighter world

So it comes down to how you approach this new release and what you intend to use it for. There’s also something to be said about the box containing five wonderful Terminator minis at a price which is cheaper than acquiring them in standard 40k packaging. If you assess this game for it what it is, though – a lightweight family affair with a taste of a brighter world – then you will likely be content.

If the tower defense angle doesn’t appeal or if you’re looking for an experience that may carry your squad a bit further, then you’re better off picking up Labyrinth of the Necrons. Despite what limitations exist in Rise of the Orks, I sincerely hope Games Workshop continues to produce these boxed novice titles and appeal to a younger generation eager to get their claws on a boltgun.