Up near the Korean DMZ there’s a place called Rodriguez Range. If you make the trek up the hill to the control tower, you can almost see the whole thing. Tank gunnery lanes stretch out for miles before you, curving around rugged mountains and eventually disappearing in the misty distance. Abrams tank crews qualify on this range, firing at targets five kilometers from their position, and seeing it from such a height, but still so close, provides a fleeting glimpse at the sheer geographic scale of war.

Steel Division 2 aims to provide an even larger and better perspective on war, and I’ll be damned if it doesn’t almost pull it off.

This is of course the follow-up to Eugen Systems’ Steel Division: Normandy ’44, and the fundamentals of that game have made the jump to the Eastern Front intact. Here you’ll find the same massive real-time tactical battles across miles of front line, with infantry, armour, artillery, and air force on hand to push that all-important control line back a few more acres. These remain the centrepiece of the game, and they look even better this time around.

There are some differences, mind you. For one thing, both the Axis and Russian sides are, shall we say, less than passionate about the fight, and appropriately enough. Russian conscripts buckle easily under pressure, but they’re available in plenty. Across the line, the better-trained SS troops are more effective, but they’re disheartened and not up to their full fighting strength. 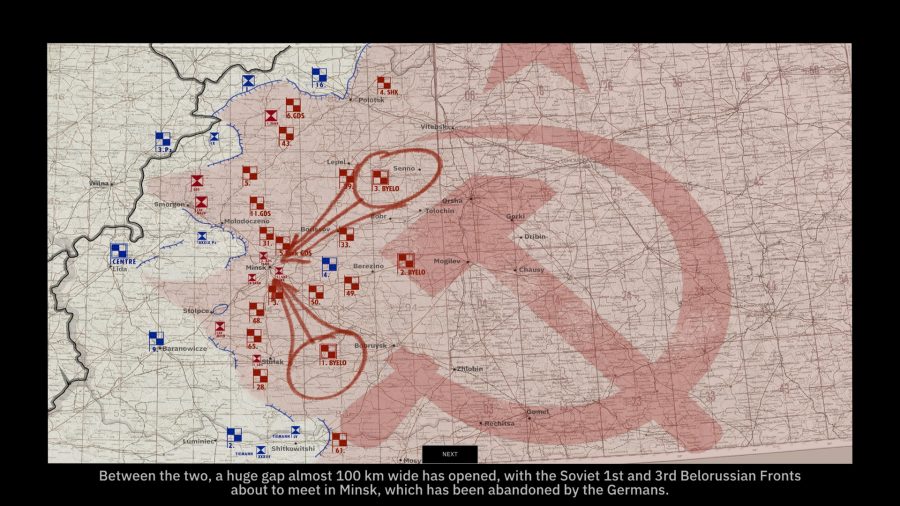 There are 18 new divisions included in the base game, plus another two that come with a special pre-order pack, and owners of Steel Division: Normandy ’44 get access to another four from the first game. That’s sure to prove controversial, particularly among players who want to focus on multiplayer. This time though, multiplayer battles aren’t the star of the show.

The biggest change Steel Division 2 introduces is Army General mode. This is a single-player strategic experience split into four mini-campaigns set near Minsk during Operation Bagration, the Soviet offensive in Belarus that finally shattered the German frontline in the summer of 1944. Players who are used to traditional real-time strategy story campaigns may be surprised to find that Army General mode is, in fact, a fully-featured wargame. There are no pre-planned battles to fight in Army General mode; rather, your movement decisions will determine where battles are fought and which elements fight them.

The four short campaign scenarios cover several days each, with each turn representing half a day. You’ll begin with a quick historical briefing on the situation, complete with newsreel footage, strategic maps, and some somewhat robotic-sounding narration explaining the broader war plan. Then, it’s on to the campaign map – and what a map it is. You play on a transparency taped over a planimetric map from the era, moving little metal Monopoly markers around to represent your component battalions. I’ve mentioned my love of maps before, and Steel Division 2’s Army General map is perhaps my favourite map in any game to date. 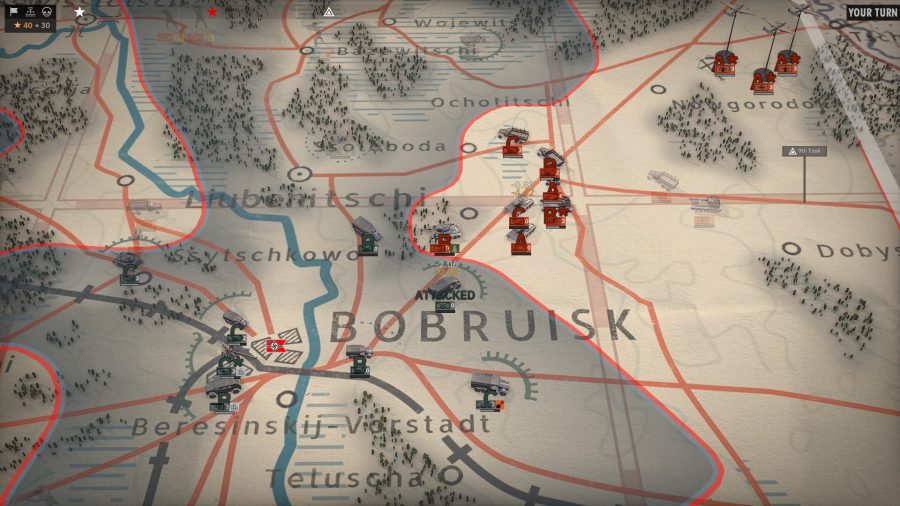 While the map looks lovely, I found that unit movement was a bit on the wonky side. Army General mode is massively ambitious, but Eugen’s rocky past year definitely shows in how rough some of the features are here. Newcomers to this kind of wargame will undoubtedly be confused at first at how to set up participants in tactical battles, and there’s nothing in the way of a tutorial that explains how it’s done.

Even once you know, clicking between the encounter setup panel and the main map to select participating units is fiddly and often involves repeatedly clicking back and forth to get it to work. Playing through the campaigns, I also experienced occasional crashes that would undo several turns’ worth of play. In one case, I was unable to select units for a battle at all and couldn’t progress the game until I did.

Fight on all fronts: These are the best WW2 games

Ultimately, I had to scrap that playthrough and reload a save. The game also doesn’t make much of an effort to show you which units are available for a battle, and you’ll have to scroll around to find air or field artillery units if you want them along. These rough edges aside, though, Army General transforms Steel Division 2 into a respectably serious wargame.

Historic orders of battle are represented down to the motorized rifle battalion and support company, and you’ll have to carefully decide how to position these along your frontline for maximum effectiveness. Distance from an engagement will determine when these assets arrive in the battles, which are still dividing into the first Steel Division’s A, B, and C phases. 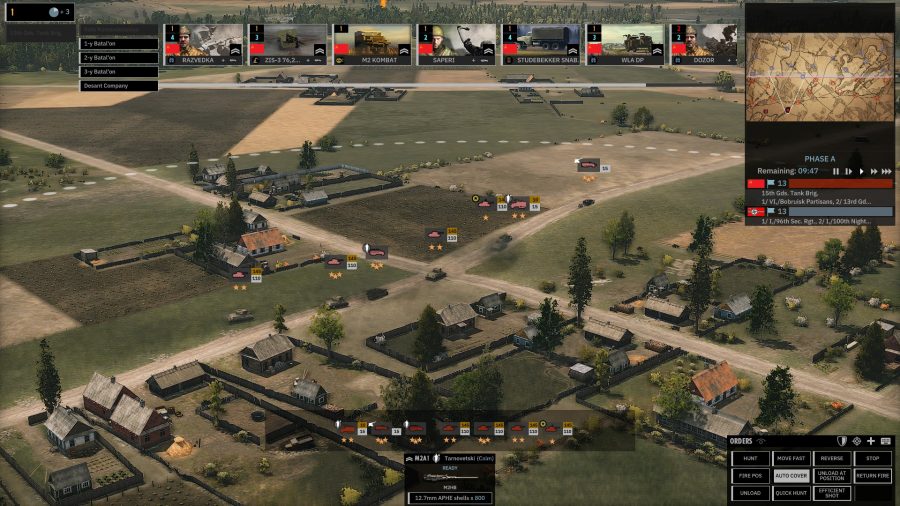 Battles can be won or lost in any of these, and a powerful unit of armoured cavalry may not be able to save the day if they show up late to the party. Army General mode gives you the option to auto-resolve the tactical battles, but I’ve generally found that – even as a middling player at best – the results tend to be substantially better when I take command personally. But if you opt to auto-resolve, Steel Division 2 will give you a full breakdown of casualties, as well as hits both sides have taken to combat effectiveness.

This Steel Division draws from bigger, more ambitious games on the operational level

It’s the impact the campaign has on those tactical battles, though, that really marks out Army General mode as brilliant. Eugen’s previous campaigns, in Wargame: Red Dragon and Wargame: AirLandBattle, haven’t approached this level of operational-level strategic depth. What might have been a simple wrapper for a series of pre-baked RTS encounters is in fact a wargame that can count among its influences such heavyweights as The Operational Art of War and Gary Grigsby, even if its scale is nowhere near as vast.

It’s hard to overstate the revelation achieved in this element of Steel Division 2. This Steel Division makes no bones about the fact that it’s drawing from bigger, more ambitious games on the operational level. But in all those cases, the fight – the real steel on steel – has remained a product of the player’s imagination. The phases from the original game become reinforcement waves, and so it’s proximity and tactics that determine when fresh troops arrive, rather than artificial limitations in the interest of balance. 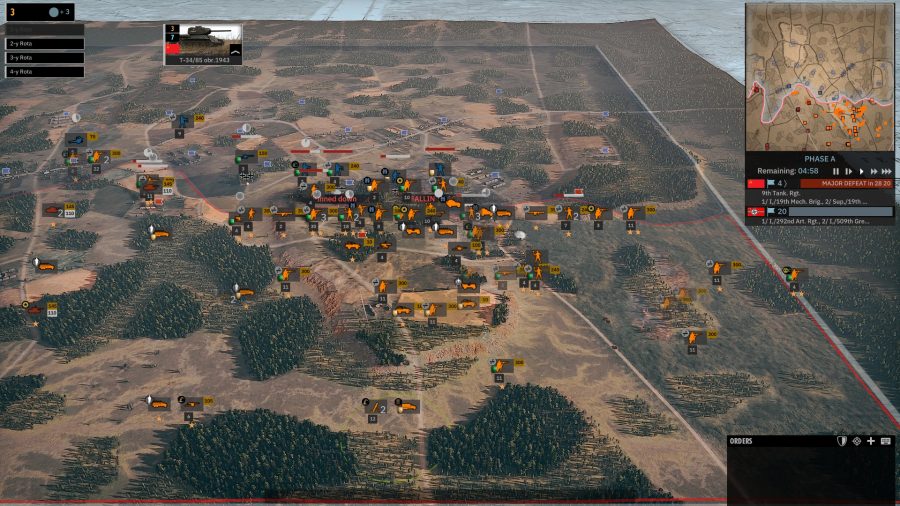 Moving anodyne NATO counters around a map is all well and good, but commanding the troops represented once the fighting breaks out gave me a renewed sense of how mind-bendingly big the war, and specifically the Eastern Front, really was, even if only through a digital camera obscura. It’s the same kind of scale I glimpsed briefly from up in that Korean range tower years ago – firing the main gun of a tank with a range of more than two kilometres means you eventually have to start accounting for the curvature of the earth.

It’s those tactical battles, the very bottom of that pyramid of scale, that are Steel Division 2’s bread and butter. On paper, they’re the same affairs from the previous game: large-scale combined arms battles fought over a dynamic front line in real time. Practically speaking, with the divisions at hand this time around, they’re a bit different.

Five years later: These are the best Korean War games

First, the planning phase (outside of Army General mode) gives you more options about how and when to deploy troops. Activation point costs vary based on whether you want raw or veteran troops, and you can select which phase in which you want to deploy them, with a premium on vanguard deployment. Basically, you can have experienced units in the A phase, but it’ll cost you, and you won’t get as many of them.

This means Soviet formations are highly incentivised to hold as much ground as they can while committing as little as they can afford until Phase C, and then flood the zone with cheap infantry and T-34s in the final phase. As the Germans, you’ll want to strike hard and fast to deny them the opportunity, but in that case it’s crucial to bear in mind that your own forces are, as I mentioned above, war-weary and not well-supplied at this point in the war. The Russians also bring a respectable air force and truly fearsome artillery to bear, and so German players have to be careful about committing to any offensive. 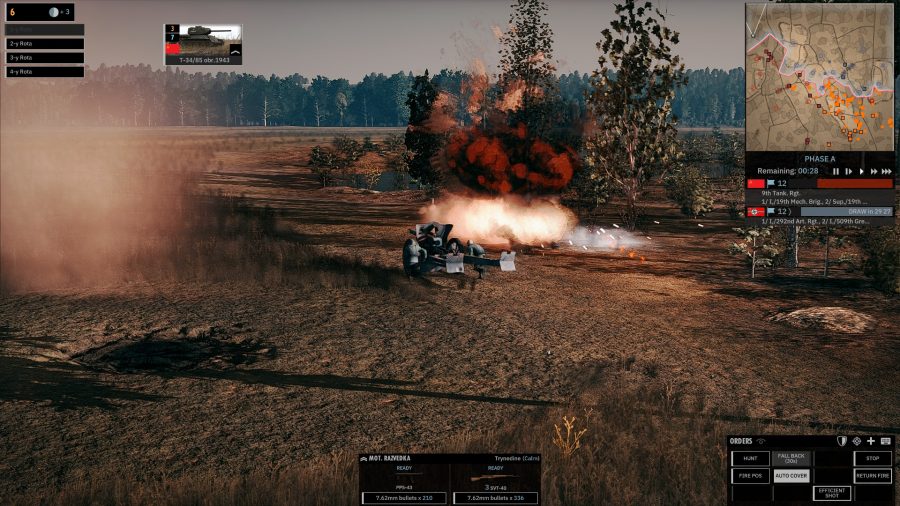 And so we’ve come to the end of the review, and I have so much more to say. The multiplayer balance, the modes available, the ability to launch custom servers…

I want to talk about stationing Katyusha launchers on the backside of a hill just so I can wait for my enemy to roll his Tigers into a  position he thinks he’s safe and lethal. There’s the American expectation that the Russians would crumble before the might of the better-trained Germans – a myth willingly propagated by Germans since the Cold War began.

I think Steel Division 2 is a masterpiece. Flawed in many ways, certainly, but a game that reflects a certain devotion to the source material that you don’t see outside hardcore wargames. It’s unfinished and probably needs several more months of longitudinal data before its creators have a viable multiplayer game on their hands. But on the single-player front; what they’ve built now, and what it’s clear they intend to do… this is the war game I’ve been waiting for all these years.