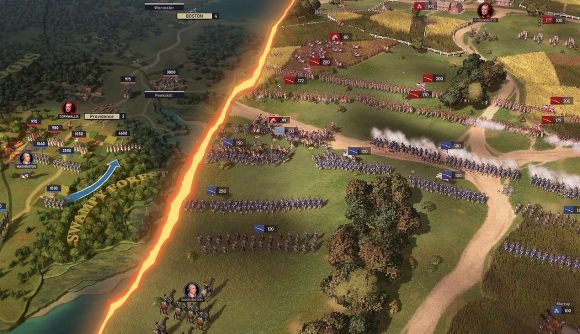 Game-labs is quickly becoming a new powerhouse in digital wargaming… or at least, it would be, if the studio bothered to tell anyone about what they were doing. You’ll know that they are working on Ultimate Admiral: Age of Sail and Ultimate Admiral: Dreadnought, of course. You might even know they’re working on a more sim-focused naval game, Sea Legends.

But did you know they’re returning to the original Ultimate General brand and creating a new entry based on the American War for Independence? No, me neither. We will give full credit and props to YouTuber History Guy Gaming for this one – we spotted the below video being shared on social media, which is how we also learned of the game’s existence.

He himself was tipped off by a member of his community, and the video is mainly just him talking through the home page linked above – so there’s no gameplay to see but as he is an Ultimate General: Civil War veteran, his perspective and observations – about what we do know and can see – are actually pretty useful.

There’s a lot to unpick on the game’s homepage. Incomplete information, only being able to control tactical battles if you have a general nearby, supply, infrastructure & logistics… you’ll also be shocked to know there are two factions – the Americans and the British.

There’s a lot of interesting stuff here, so make sure you give the page a read if you’re interested. The game doesn’t appear to be available to buy yet, though they will be going down a ‘Limited Edition’ route at some point where you can gain immediate access to the game – something they did with their Ultimate Admiral games before they hit early access for real.

We’ll bring you more information on this title as we find it.

This article was first published on November 16, 2020.

PCGN's section editor for strategy content, Joe used to be Wargamer's editor and knows way too much about Roman military history.