Ok, prepare yourselves. This little tome is gonna be different. Over the past two weeks or so I’ve enjoyed the Hell out of playing the hex and counter wargame 1918/1919 Storm in the West, just republished by GMT. By not playing it. Sort of. Well, yes, I did. Storm in the West, by the ubiquitous Great War Grognard Ted Racier, was actually published back in 1992 under the XTR label via Command Magazine. Now GMT has revived this classic by releasing it with an entirely new graphics package. The second coming of a game this rare is particularly noteworthy to begin with, but the new visuals really raises the proverbial bar.

I don’t have the GMT release, but I do have the original XTR games on which it was based. Given GMT has graciously allowed the new rules to be downloaded in PDF format for free, I was able to take the game through its retraced paces quite nicely. Overall, the game is an excellent study into the final German offensives on the Western Front during the last year of World War I, with a compelling look at a possible extended fight had the war lasted through 1919 as a bonus.

And as I will discuss at the end, I also discovered, in one single game, a lot about where this genre of the wargaming hobby might be heading into the future. 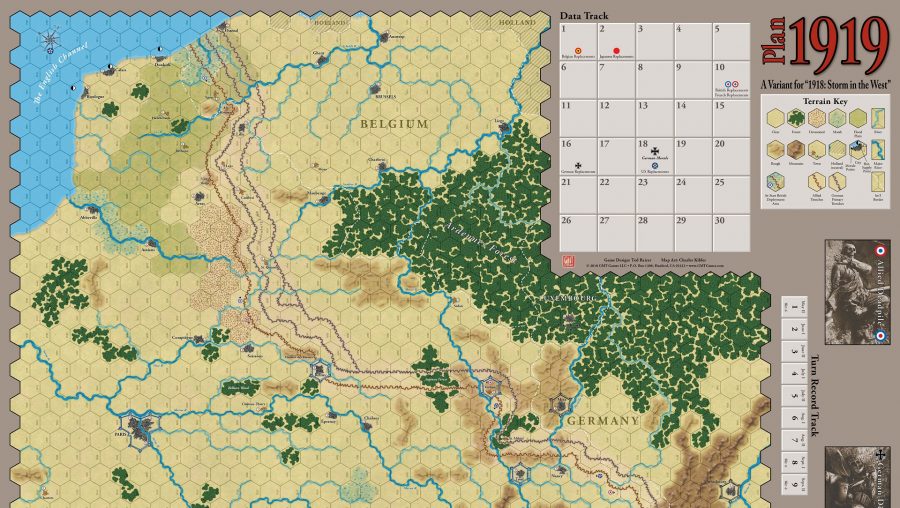 The big, and really only, change in this game are the visuals. The original map, which was not bad looking for way back then, has been completely updated to a much sleeker and cleaner look. Further, while the original game only discussed annotations necessary to the 1918 map to allow for 1919 play, the new 22 x 34-inch map is back printed. On the reverse is a full fledged 1919 map with all cartographic modifications printed and any necessary table changes added.

The new counter mix is much more modern and subdued

The real big eye candy news, however, is the counter sheet. The game has the 163 x 5/8 inch counters from the original XTR edition plus the additional 32 Plan 1919 counters (along with a three-page scenario) from Issue 19 of Command. Admittedly, the old style was a bit garish, quite heavy on the Gothic print, and of course, given its production by Ty “Deutschmeister” Bomba, some of the German counters had to be in black. Snicker if you must, but with electric blue for the French and the BEF’s day-glow orange for play during a black-out, all of a sudden schwarze Stosstruppen don’t look half bad.

The new counter mix is much more modern and subdued. Background colors are softer pastels such as khaki for the British, olive for the Americans, horizon blue for the French and a softer blue for the Belgians. The NATO symbology is smaller and sharper, while actual top down, roundel level, detailed images of machinery such as aircraft (if my eyes do not deceive me, SPAD XIII for the French, Sopwith Camel – sans Snoopy – for the British and the Albatross for the Germans) adorn the counters as opposed to black silhouettes. 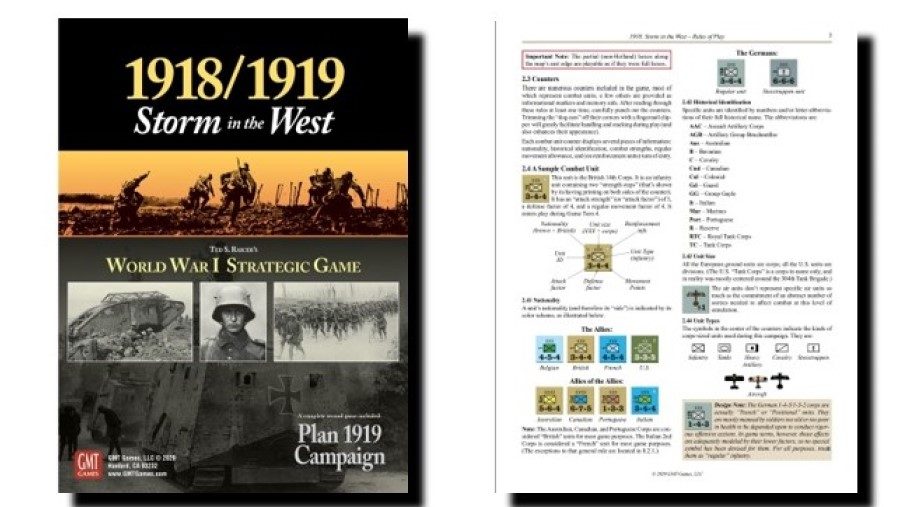 The rules have also been redone and are now 28 pages long with two crib sheets as opposed to the 16 plus 3 pages out of the two Command issues. However, the new booklet also has entirely new, modern formatting and a ton of full color illustrations to provide needed examples of play. Likewise, there is a new page devoted entirely to an Extended Sequence of Play plus (yes!) an index. The verbiage is nearly identical to the old, but GMT has wisely converted some famous XTRisms (such as Old Hands tips) into things like Design Notes and such.

Board game weather: Read our Storm Over Asia review 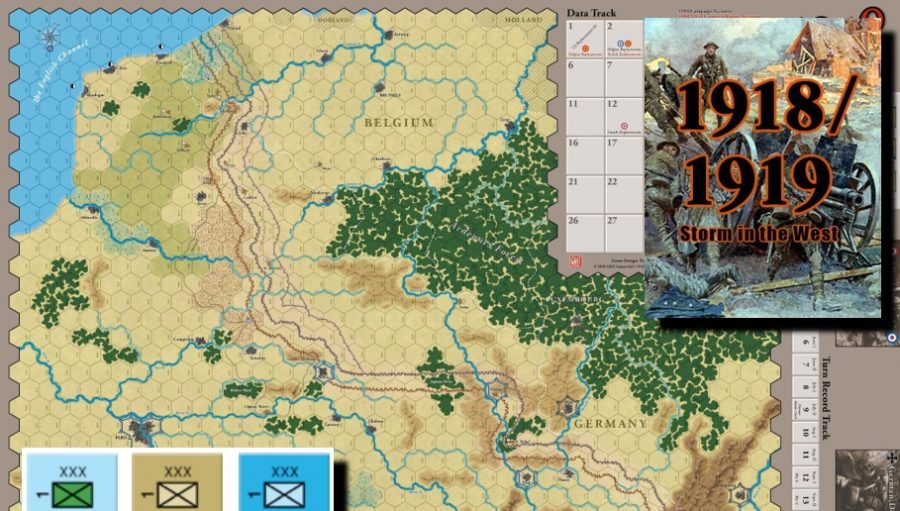 How does it play? Well, when I implied nothing had changed, I wasn’t kidding. If the Inside GMT blog post by the designer is any indication, the only thing new is the incorporation of all errata into the rules text and the gutting of French reinforcements (Sacre Bleu!) in the 1919 variant. This is a good thing because Storm in the West was nominated for a Charles Roberts Award, and Racier brought it home with the next game in the series – When Eagles Fight, published via Command 25 in 1993. Change for the sake thereof is always tempting, but this is high quality stuff here, so kudos to GMT on not trying to ‘make it better.’

The scale of Storm in the West is 8 miles per hex, ½ month per turn with each counter representing something like a European corps of between 10 and 60,000 men, or one of those behemoth American divisions of 30,000 combatants. The game can be completed in about four hours, pretty much on the money, while solitaire play is exceptional.

Storm in the West is typical of games from that era, following a relatively standard format of alternating play with very little chaos or unpredictability tossed in via random events and the like. Take that formula, embellish it with a few tweaks for historical military environment relevance and realism, do it well, and Voila! you have a classic.

The sequence of play from Storm in the West is a good place to understand why and includes the following for each Player Turn: 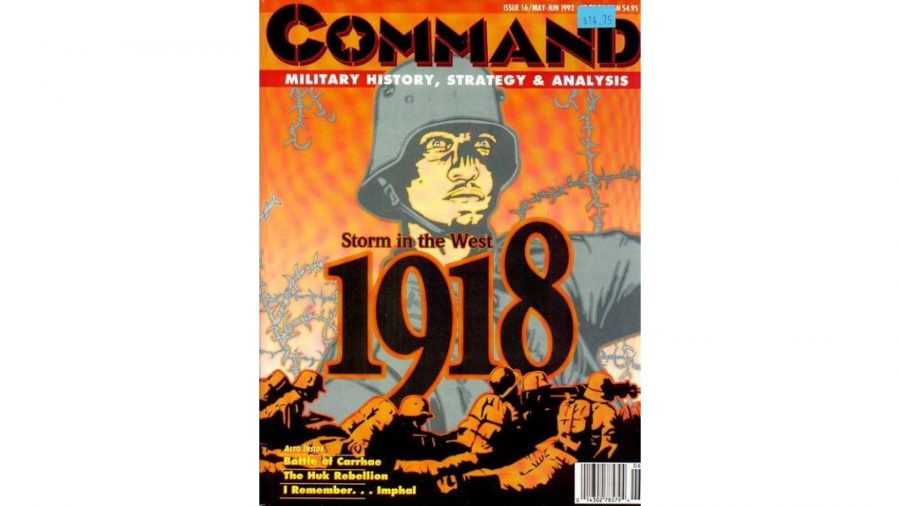 Then, of course, one has all the standard rules concerning stacking, Zones of Control, the effects of terrain on movement and so on, but Racier has carefully integrated a lot of Great War chrome to creating a slogging, just short of rapid maneuver, ambience in the game. I have already mentioned the unique double supply check in the game, which encourages players to withdraw units from the front.

Now add in an attrition based combat table where both sides will normally suffer ‘Loss Points’ no matter who wins, and where even at a straight 6 to 1 odds the attacker still has a 33% of having his head handed to him. Loss Points may be satisfied by either retreating or unit step reduction, but overall bigger is not always better in this game. Instead, the type of ‘bigger’ is more important and this is where integrating Infiltration capable units or air power into your overall attack scheme becomes very important, especially if one decides to resume the assault during the Second Combat Phase. When you consider supply and the replacements you don’t have coming down the pike, this is where the game becomes a real nail biter and rightfully so.

There are other little quibbles and bits I could mention, Allied naval evacuation for example, but the one that really floored me was rule 16.2 on the Influenza Epidemic of 1918, a medical crisis that will tank your replacement capacity in a lung-congested heartbeat. I kid you not, the original Command issue this game appeared in had a feature article on “The Plague of the Spanish Lady” and the fact that GMT chose right now to release its reboot of Storm in the West is just downright creepy.  Winning the game is by capturing and holding key pieces of real estate which are worth a certain number of Morale Points. Drive your opponent’s morale down to zero and you win. The game also includes a beginner’s version that simply delete’s certain rules, such as Supply. 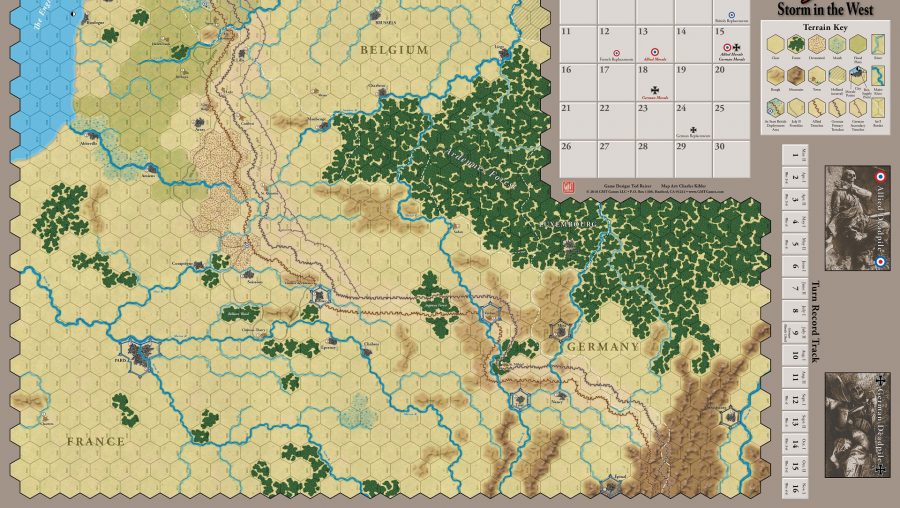 1918/1919 Storm in the West is a rock-solid game regardless of publication date, and if you don’t have the original (then just download the new rules) or cringe at the neon counters, this is a good buy. Even considering the typical high price tag for paper products, in this case I’d buy it and recommend it.

But there is another reason republished classics such as this one have always been a special interest of mine. This stems from one of my final duty station changes for the Army where the moving van carrying my household goods burned to the ground, and all my boxed hex and counter games with it. I caught unvarnished Hell trying to replace them, so seeing GMT and other firms reprinting older games from other, now defunct companies has been a blessing.

But perhaps its more than that, because retro reprint seems to be a growing trend with all major tabletop wargame companies. GMT seems to have republished just about everything Ted Racier designed for the Great War, and of course one has the old Avalon Hill Consim Russian Campaign, Mark Herman’s Pacific War and GDW’s Beda Fomm. Likewise, Compass Games lists no less than 18 such “Designer Signature Edition” products scheduled for publication in 2021. Given everyone seems to agree that survival demands GMT style diversification into quasi-military political games, Euro games, Card Driven Games and wargames that reject hexes but welcome integrated sequences of play to generate uncertainty, this revival does seem counterintuitive. 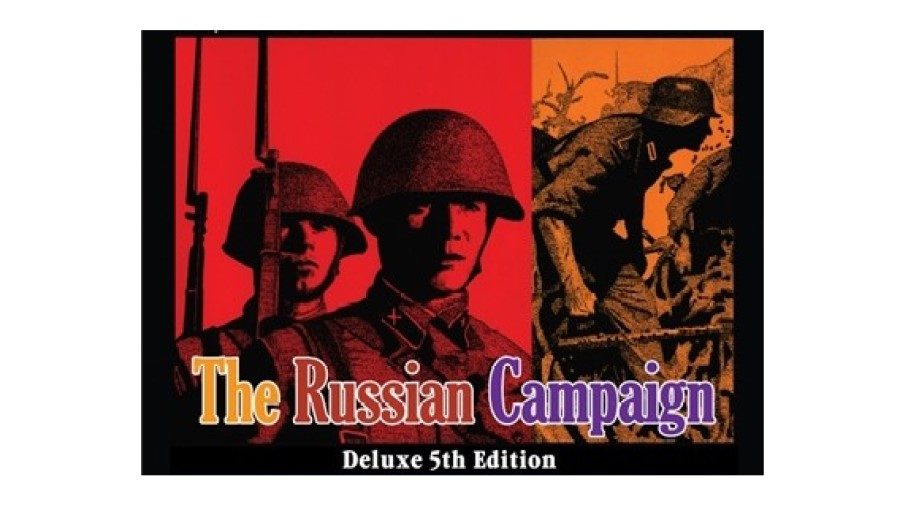 So, I canvassed the GMT Facebook Group, my own friends and several other social media groups about this. There was solid concurrence that many modern conflicts demand abstract treatment because of their asymmetric nature, plus overall today’s current and future wargamer is different, preferring games that seem more poker than chess oriented.

All above (duck)board: Try our list of the best WW1 board games

The unpredictability of the cards (ironically allowing more realism as regards Clausewitz’s ‘friction’) combined with an integrated or random sequence of play is this participant’s description of fun. Complexity is not an issue. This is not to say some don’t enjoy traditional IGOUGO hex and counter games or that there isn’t a market for such games in this demographic. However, as the owner of the Standard Bearer Hobby Shop told once me, “I carry mostly fantasy-SciFi so I can afford to stock historicals.” GMT and other firms seem to agree. 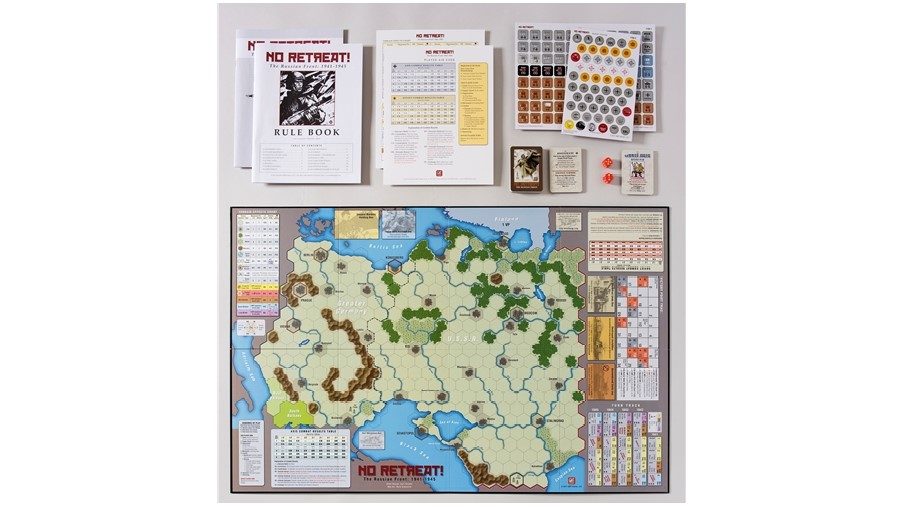 But why the simultaneous resilience of the oldies, like Russian Campaign? Opinions were many, but one player demographic that did stand out was age. There were of course exceptions, but in general, younger gamers preferred newer less traditional games such as Weimar Republic, while more… ‘distinguished’… gents such as myself preferred the simpler, more regulated, chess-like approach of older hex and counter games. So if it’s a Russian Campaign (with 1635 preorders for the newest edition) or No Retreat Eastern Front (with 55 random event cards), the latter choose the former.

That’s when it hit me – are GMT et al marketing nostalgia? While higher production values add cost, having the base rules and design already finished should drive final prices down. And if the desire is to market attractive products to a shrinking customer demographic, this makes a lot of sense. Certainly, even I enjoy a break from modern mind-numbing fare that only a Panzergruppe Guderian can provide, and I’d bet there are still a lot of older folks still around who’d agree. 1918/1919 Storm in the West nods strongly in this direction, just as it also suggests an inevitable, coming twilight.

Not to worry. None of this has one whit of data-driven analysis behind it, so take this tome for what it’s worth. Yet for those stalwart veterans whose cardboard legions have been lost or damaged over the years, the time is nigh to once again enjoy some of the best wargames ever made. At least for the now, before the sun fades.