Axis & Allies is a classic. Originally published by Nova Game Designs in 1981, and taken up by Milton Bradley in 1984, it would go on to become one of the most successful and long-lived board wargames of all time. There’s a reason for that, of course. Axis & Allies was a breakthrough game. It lived in that twilight zone between traditional hex and chit wargames and the more ‘kid-friendly’ Risk. Then, as part of the Game Master’s series under Milton Bradley in the 1980s, Axis & Allies massively outperformed the other four big box games leading to its continued production.

Over the years this game has received around 20 releases, new versions, and spin offs. It is a pillar of the wargaming industry… which makes it a bit awkward for me to mention that I really can’t stand it.

It’s not Axis & Allies’ fault. It’s a perfectly serviceable wargame. But in the 36 years since its release so many other games fill the same void without the 18-hour play time and super swingy dice. I exaggerate, of course, but this is definitely an all-day affair if you try to get it out on the table. This makes it ideal for a digital adaptation, and I’m glad that we get a new iteration every few years.

I remember many evenings as a youngster playing the long lost 1998 release. This newest iteration, by developer Beamdog has had a bit of a rocky start. It’s entry into Steam’s Early Access was rough, with plenty of bugs and crashes keeping me from putting much time into it on release. About a year has passed now and things are starting to shape up. So, what can you expect if you try and take the digital plunge into a classic bit of wargaming history? 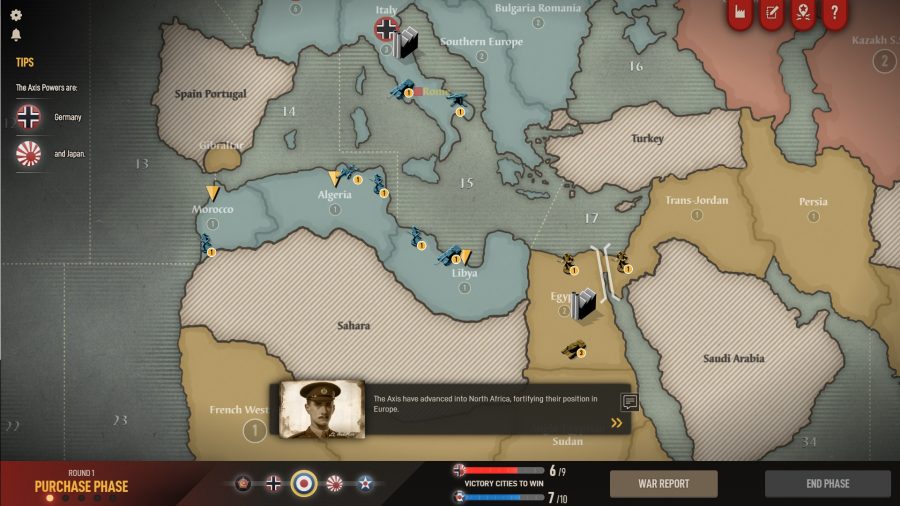 There’s a solid little tutorial and clicking on units gives a summary of their rules. Definitely read them in full.

Axis & Allies pits three players controlling the UK, USA, and the Soviet Union against two players controlling Japan and Germany. Or any mixture of players can control multiple nations. All the ‘minor’ factions are amalgamated into one of these large factions for simplicity. In a fixed turn order of several phases, Russia, Germany, UK, Japan, USA purchase units and manoeuvre for victory. First, players purchase new units based on their controlled area and economic output. They then maneuver existing units to attack territories and sea zones. Combats are carried out on a sub board where dice are tossed and units removed.

Next is Non-combat movement, followed by placing newly acquired units. It’s a straightforward game and having all of the set up and dice automated makes for a much smoother experience than pulling it out on the table. This is probably the best way to experience Axis & Allies if you’re a novice, especially if you’ve got some friends to play with or against online. It’s an interesting game that combines economic management with strategic decision making, tactical planning, and team cooperation, and wildly random dice. There’s a lot to love, but the swingy nature of its dice game and its longevity, leading to some definitely better opening moves can eventually grate on some players. 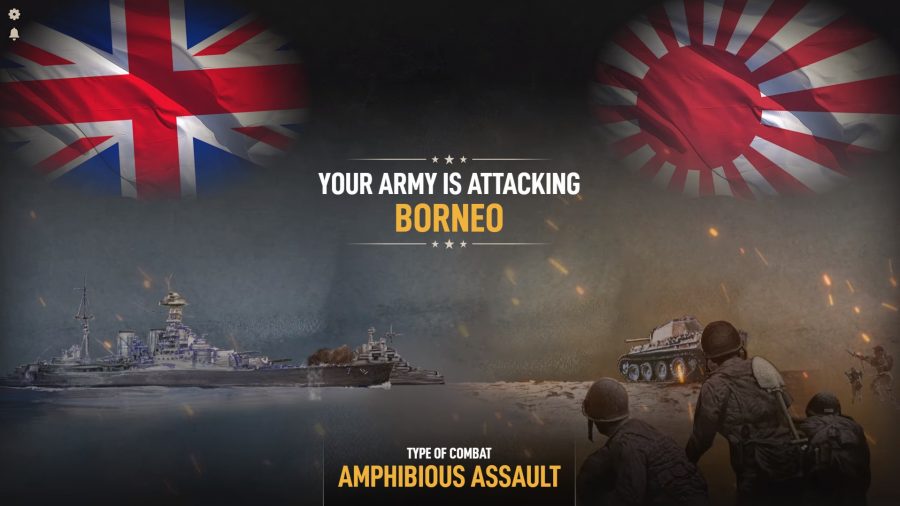 Axis & Allies Online is an adaptation of the 1942 Second Edition, and faithful. It would have been nice to see some other editions represented, like my dusty copy of the 1984 edition that’ll never see the light of day again. 1942 adds a few units that give more player choice, like destroyers and artillery, and there is an alternate competitive start if players are looking for something different. I do wish there was the option to tweak the game start, but that doesn’t look like it’ll be happening.

As mentioned, a lot of the bugs that plagued the initial jump into early access are gone, but others still linger. Reports on the Steam forum of AI failing consistently during online games is being worked on by the developer, and I noticed some graphical glitches here and there while playing. The UI is generally clear and readable, though sometimes it can be difficult to select units if a space is crowded. This occurred most often when trying to land airplanes in and around sea zones. They need to make landing and transporting units easier.

Not board of digital versions? Try our Root: Digital Edition review

Now, to discuss the dice. Anyone taking a look at the Axis & Allies Online steam discussions will see endless comments railing against what a significant portion of the community feels are wonky dice. I’ll admit, having first played the game without really looking online, I had a nagging suspicion that something was up. It was entirely too common to have industrial bombing missions end in abject failure.

Strategic bombers should only be shot down 1/6 of the time, but it happens with a regularity that makes me feel there might be something wrong with the random number generation. The debates are endless, with the developers insisting nothing is wrong and angry gamers yelling into the void. Be warned, is all. 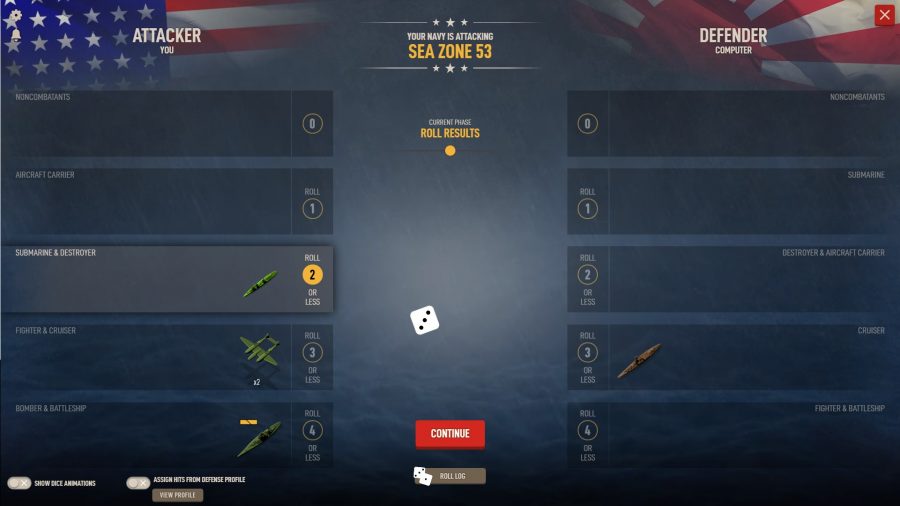 Be ready to click through a lot of dice falling. A pro or con of Axis & Allies, depending on your opinion.

More importantly, the dice issue (fictitious or not) leads into one of the major problems of Axis & Allies as a wargame in 2020.

The core system of moving miniatures and rolling a die per unit, with different ratios of success depending on the unit and whether it is attacking or defending, leads to some strange situations and occasional hair pulling frustration. Your sure-thing attack into a relatively undefended territory could go terribly, leaving you with massive losses and several less years of life, if the dice decide.

It’s a game where the whims of chance play a significant role in determining the outcome of the game, at least in my experience, and this has done more to drive my gaming group into the arms of other, less swingy titles as we got older and were exposed to more. This is not the fault of the developer of this adaptation; the fact that I was frustrated so often in the same way I was a decade ago playing this with my university colleagues speaks to their accuracy. It’s just not a game for me.

But it’s impossible to ignore the legacy and importance of Axis & Allies. For many, many people it remains a staple on the gaming table and to see a relatively stable, pretty adaptation is wonderful for them. Hopefully the minor problems that still exist will be quickly stomped out by Beamdog.

If you’ve got any interest in Axis & Allies as a foundational wargaming experience, or even just want a way to play it without the 2-hour set up, I can recommend Axis & Allies 1942: Online. If you’ve got any doubts, wait. It’s still in early access and there is time for them to shore things up. As for myself, I think I’ll go have a lie down.