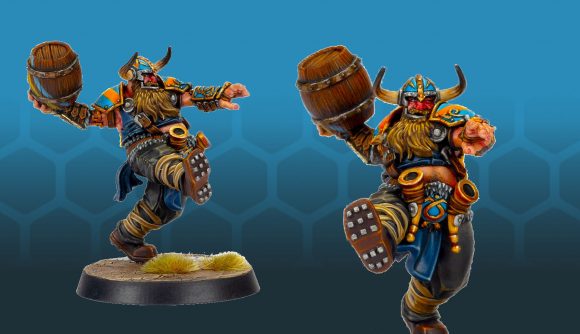 Warhammer 40k and Age of Sigmar weren’t the only properties that got something new and shiny announced at Adepticon this year. Blood Bowl will apparently see a classic comeback, but this time in plastic. Please welcome the heavy-hitting, fast-attacking Norse team to the field.

While a Warhammer Community post on March 24 gave the first look at the Norscan team, another post on Monday shone the spotlight on a new star player. Thorsson Stoutmead loves his mead so much that he carries a barrel wherever he goes – which is great because it makes an effective weapon when thrown.

‘Beer Barrel Bash!’ is a new ability that means, once per drive and at the start of Thorsson’s activation, he may throw his keg of mead as a special action. Drunkenly catapulting a barrel at an opponent does have its risks, though. Thorsson can cause the ‘Knocked Down’ effect with this barrel, but only if you roll 3+ on a D6. Fail to do so, and Thorsson drops the barrel and is Knocked Down himself.

Thorsson Stoutmead will be available to pre-order from Forge World at some point, but Games Workshop hasn’t yet specified when, or how much it’ll cost.

While Thorsson Stoutmead would make a good addition to any Old World Classic team, the Norse team is most likely to indulge his drinking habits. Warhammer Community has also shown off the Norse Valkyries, Berzerkers, and Ulfwerners taking to the pitch – as well as the adorable (and essential) Beer Boar miniature.

Looking for more Adepticon reveals? You might be interested in the newly announced Chaos Knights codex and army set. Or, if it’s Blood Bowl you’re here for, we have a Blood Bowl season 2 review right here.