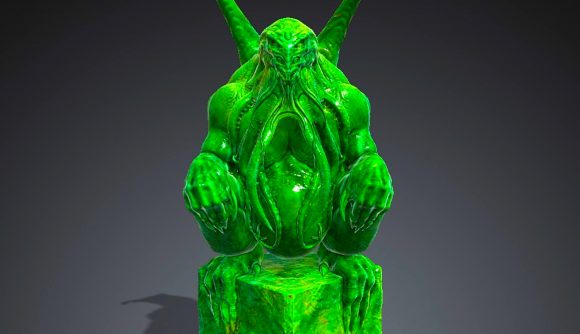 Critically acclaimed tabletop RPG creator Chaosium, best known for the Lovecraftian TTRPG Call of Cthulhu, has announced it is “suspending” its plans to release Cthulhu-themed NFTs after receiving heavy criticism for the project online. Although Chaosium announced the release of these NFTs in July 2021, the decision did not appear to receive widespread public pushback until early 2022. But Chaosium’s President Rick Meints has now responded, announcing in a blog post on Wednesday that Chaosium is suspending all future NFT plans.

“We appreciate that many of our fans are angry and disappointed,” Meints says in the blog post. “We hear you.” Meints explains that Chaosium and its NFT-producing partners TYPE40 and VeVe have agreed to suspend NFT releases “on VeVe or any other NFT marketplace”. Meints  adds that “[Chaosium] will never require anyone to own an NFT/digital collectible to enjoy any Chaosium product or game”.

Chaosium reportedly entered the world of NFTs in 2019 by discussing plans with VeVe – a ‘digital collectibles’ company that also holds the licence to produce NFTs for Disney, Marvel, DC Comics, Warner Bros., and more. Chaosium publicised the initial offering of the NFTs in July 2021, a release that Meints claims “didn’t receive much attention” but was “successful and well received”.

While Meints acknowledges that fans are concerned by Chaosium’s NFT operations, the blog post also takes aim at some common criticisms of NFTs. Meints  claims that Chaosium’s NFT licensees operate on a carbon neutral blockchain platform, and that “the artists involved share fully in the proceeds of [the NFTs’] sale”.

“We believe that VeVe is an ethical company”, Meints says, claiming VeVe is “pioneering a new digital community for collectors which uses this distributed ledger technology in a legitimate, meaningful, and environmentally responsible way.” The blog post on Chaosium’s website also links to several sources that seem to support the use of NFTs – most notably, the phrase “people are justifiably baffled, incredulous, and deeply sceptical” links to a Harvard Business Review article making the case for how NFTs can create value.

Other industry commentators – such as Youtube video essayist Dan Olson, in his monster 138-minute video ‘Line Goes Up – The Problem With NFTs’ – continue to make waves on the opposite side of the argument, alleging that the creation and proliferation of NFTs is technologically unstable, ecologically harmful, and operates essentially as a financial scam.

Chaosium isn’t the only tabletop gaming company involved in current debates surrounding blockchain and NFTs. Gaming storefront Itch.io made a Twitter statement in early February denouncing NFTs as a scam, and Kickstarter also received backlash after a December 2021 announcement about plans to use blockchain technology.

If you’re looking to fund games without jumping on the blockchain bandwagon, check out recent news from crowdfunding website Gamefound – it just announced a massive partnership with board game creator Ravensburger, and Red Mojo Games has just launched its debut game there.

Update: This article originally attributed the quotes in the blog post to Chaosium’s Vice President Michael O’Brien. This error was corrected on Wednesday, February 16 at 13:17.