Want to learn how to play Catan? You’ve come to the right place. This classic board game might be the most popular modern tabletop game in the world, and we can’t get enough of it. With its exciting mix of player interaction and dice-rolling, we picked it as one of the best strategy board games around.

Many people find their way into the wider world of board games through Catan, but taking your first steps with the game can be tricky. Among all the hex tiles, wooden buildings, and cards, where do you start? We’re here to help. We’ve compiled this handy guide on how to play Catan so you can get started right away. From setup, to gameplay, to scoring, we’ll walk you through it all.

Once you’ve learned how to play Catan, why not have a peek at our pick of the best Catan expansions? Adding naval travel, attacking barbarians, and new cities to build, they introduce even more elements to the game. You’ll never have a reason to stop playing.

And if you’re after something a little different, read our guide to the best board games available in 2022. With fantastic titles releasing all the time, you’re bound to find something that takes your fancy. 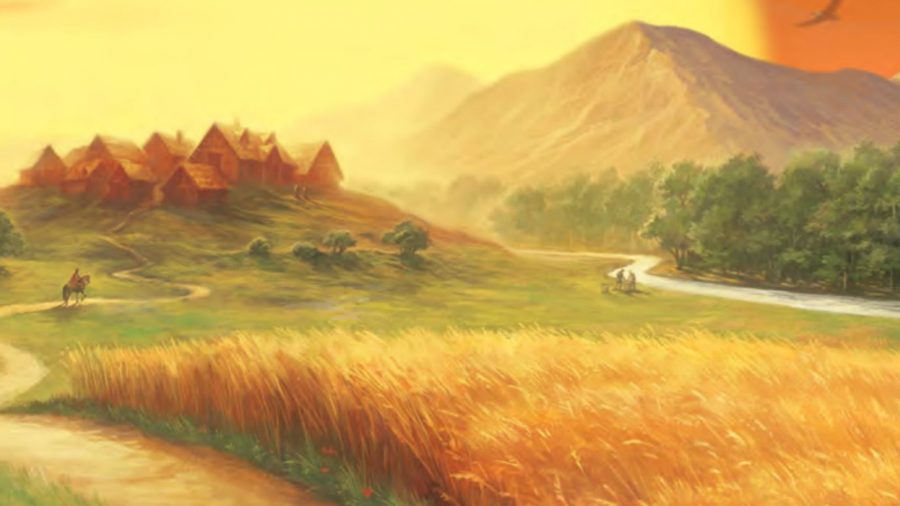 At its core, Catan is a settlement-building game. You and up to three other players will compete to earn resources and construct buildings across a small island. You’ll be trading with other players to grab the resources you most need, and placing down new roads and settlements to earn Victory Points (VP). The first person to reach ten VP wins the game. 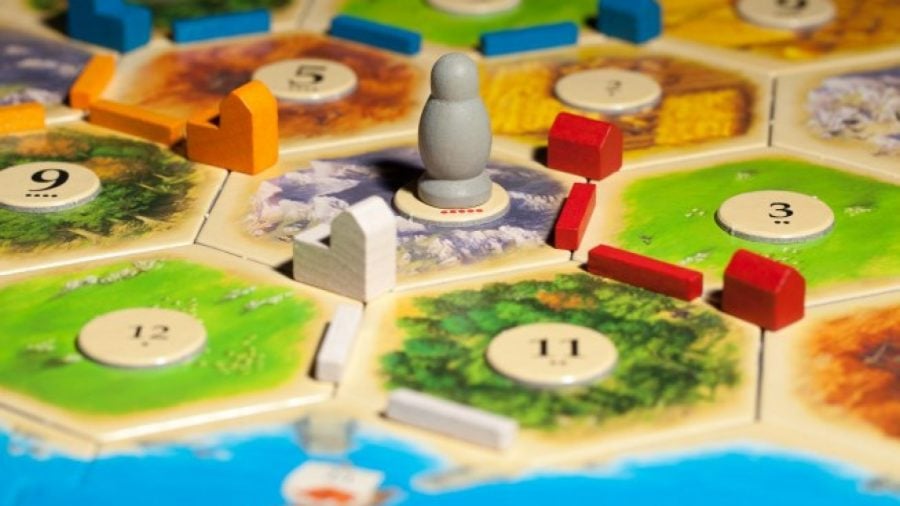 Before digging into the game, you’ll first want to assemble Catan’s board. Connect together the six sea tiles (those are the long, straight blue ones with jigsaw teeth on either end) to form a hexagonal frame. Inside that, you’ll need to randomly place the 19 smaller terrain tiles so they all fit snugly inside. Each of these represents one of the game’s five resources: lumber, brick, ore, grain, and wool,

For your first game, follow the beginner setup in the rulebook

As a modular game, Catan lets you arrange these tiles any way you want. However, for your first game, it’s recommended you follow the setup pictured on page three of the rulebook. This arrangement works well for new players, and has been balanced to ensure no one will be overly disadvantaged on your first game. If you’re following the beginner setup, place the small numbered tokens and harbour tokens (the ones with ships on) as shown in the rulebook. If you’re creating your own map, distribute the harbours randomly around the edge of the island, and place the number tokens in alphabetical order (they’re numbers on the back) in the figure of a spiral around the start. 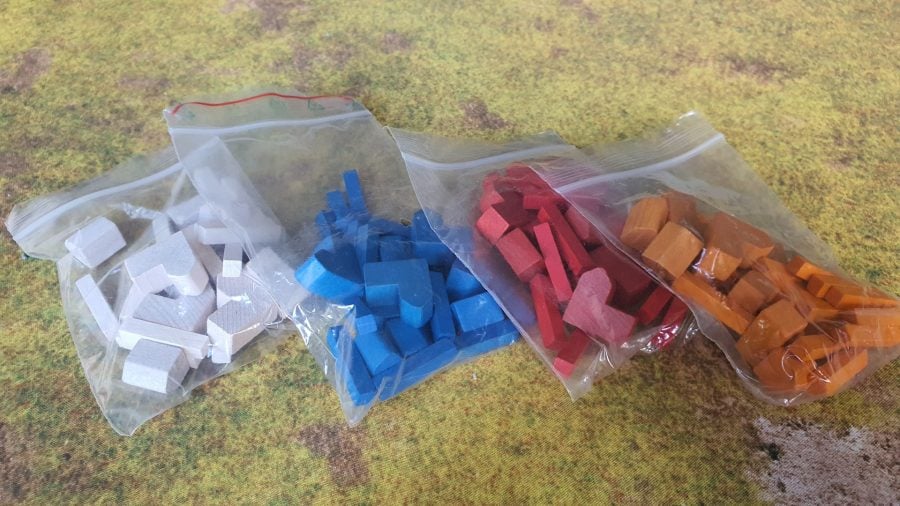 Now, the players come in. Each player chooses a colour and takes its corresponding pieces: five settlements, four cities, and 15 roads. If you’re using the beginner setup, everyone places two settlements and two roads on the board as shown in the rulebook. Otherwise, take turns placing one city with an adjacent road.

Once everybody’s made their first placement, you get to place a second settlement and road. But this time, reverse the placement order.

For the win: These are the best strategy board games

Separate the resources cards into discrete piles, set the Longest Road and Largest Army cards nearby, and place the Robber pawn on the blank desert hex. Give each player a building costs reference card, too.

In a normal game of Catan, each player receives one resource from each terrain tile adjacent to their second settlement. In a beginner game, however, use the same process for each settlement marked with a white star. 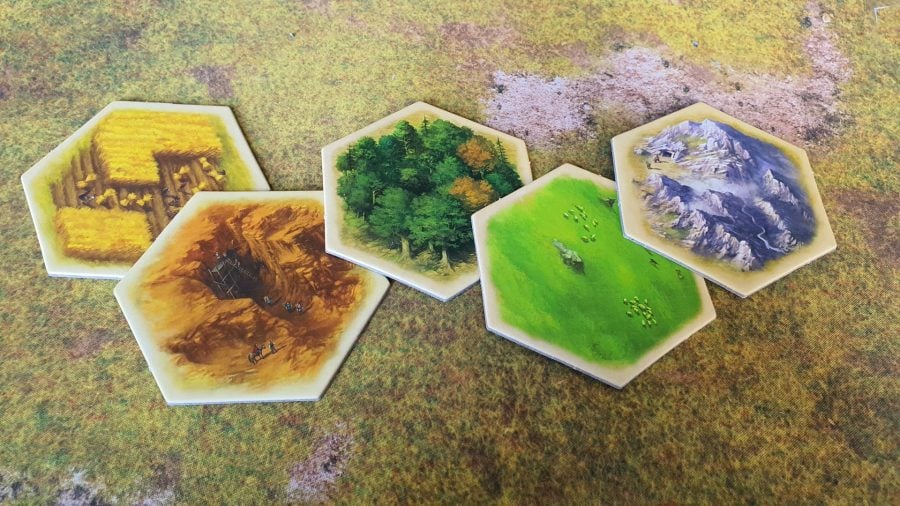 Catan has three main gameplay components: producing resources, trading resources, and using those resources to build things. Each turn is split into three phases that correspond with these actions. You’ll play through your entire turn before the player on your left starts the whole process over again.

In Catan, you produce resources, trade, and build

First, you’ll need to produce resources. This is done by simply rolling two dice. See if any player has a settlement adjacent to a tile marked with a numbered circle token that matches the total dice roll. If they do, they receive one resource card that corresponds to the tile’s resource type. Players receive one resource card for each adjacent settlement, so if you have two settlements next to the tile, you’ll get two cards of the relevant resource. If you roll seven, there’s no resources for anyone this turn – but you do get to move the Robber to a new hex of your choice, where it will proceed to stop all adjacent Settlements or Cities generating any resource, until another player comes along and moves it somewhere else.

Second, you get to trade those resources with others. Talk with your fellow players to see if anyone fancies making a deal. Perhaps someone’s willing to take a Sheep off your hands in exchange for some Ore? Even if no-one at the table fancies your goods, you can always trade four of any one resource for a single card of another, taking the resource straight from its pile on the table. 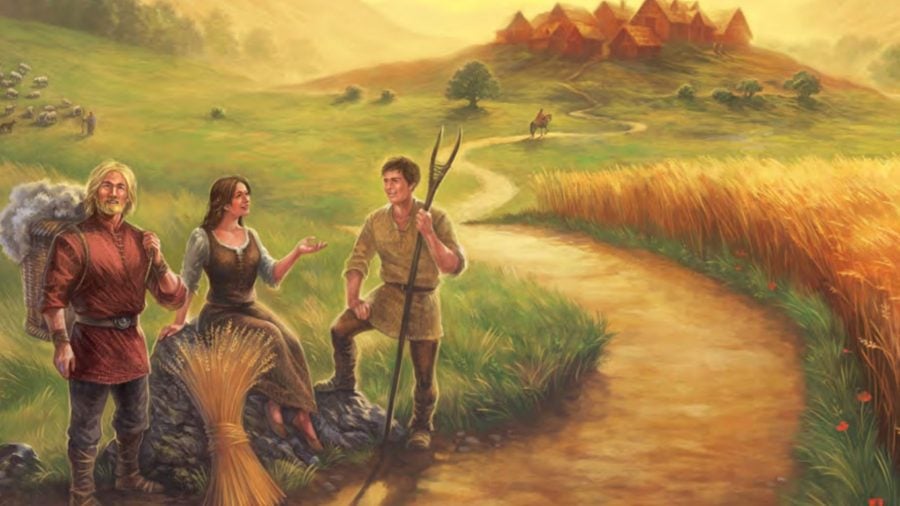 It’s a heavy price to pay, but sometimes essential. Harbours also let you access more favourable trades, but must have a settlement or city on them to use their rates.

Games of yore: These are the best historical board games

Bear in mind, players can negotiate with you, but not each other during your turn. They’ll have to wait until it’s their go before striking up their own deals. 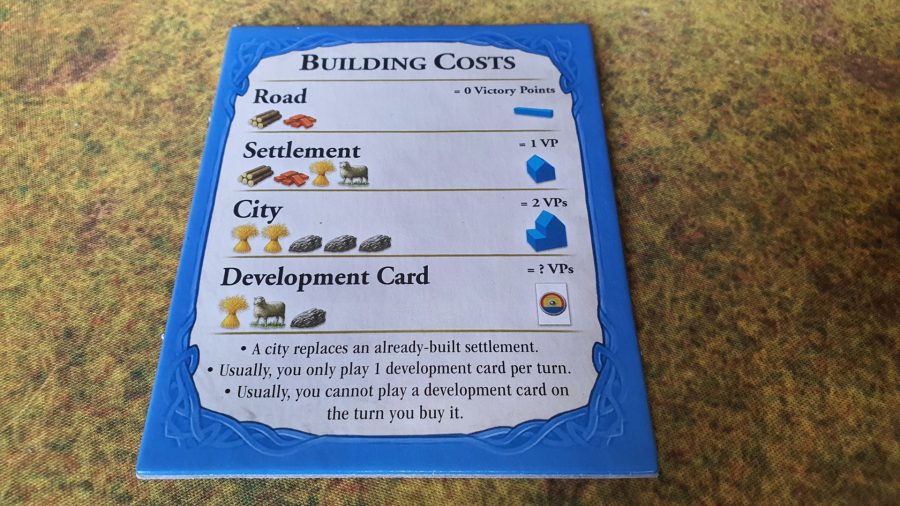 Finally, you get to build. This is where you put those carefully gathered resources to use. By paying the required resources listed on your construction costs reference card, you can plonk down new buildings settlements, buildings, and cities on the board. You can build as many items as you like on a turn, given you have the resources to pay for them.

There are four things you can build in Catan:

Roads are the simplest construction, and the basic means through which you expand your reach across the island. Pay one Brick and one Lumber to place down a road between two hexes. However, you must ensure the new road is connected to one of your existing roads or settlements.

Settlements cost a little more: one Brick, one Lumber, and one Grain. Again, you can only place down a settlement that’s connected to an existing road, and must place it at least two road spaces away from another settlement (both yours and your opponents’). Settlements are powerful, as they produce resources every time the numbers of their adjacent hexes are rolled. Each settlement is worth one VP.

Cities are upgraded settlements. By paying three Ore and two Grain, you can take one of your existing settlements off the board and replace it with a City. These guys are worth two VP each, instead of one – and produce two resources per tile when they’re activated by the dice. 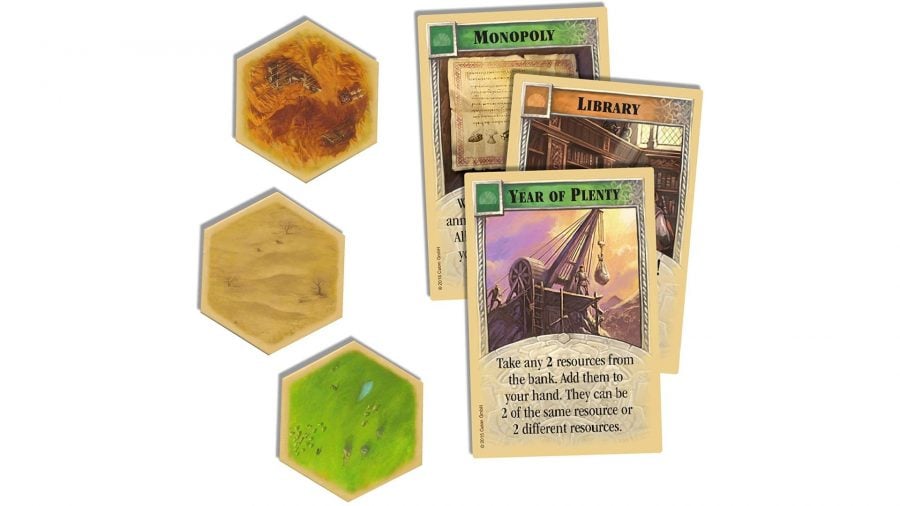 Development Cards represent your fledgling empire spending resources on improving the territory you already own, rather than pushing its borders. There are 25 of them in the game, and they come in three flavours:

Driven by the luck of the draw, Development Cards are, on the face of it, a less reliable path to victory than pure construction. But, as your games become more complex and competitive, they will play more of a role, as more building plans get blocked, and the prospect of gambling – to try and pull a VP-generating University or Great Hall – gets more inviting. 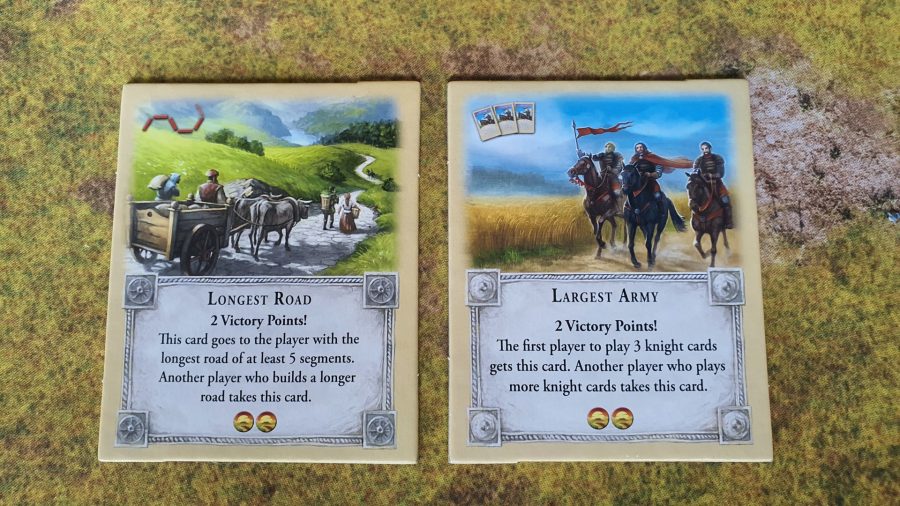 Winning a game of Catan is simple: the first player to reach ten Victory Points is crowned champion. However, you can earn VP in several different ways:

In your first forays into Catan, the simplest way of gaining VP will usually be building lots of settlements and cities. But, as you and your pals become more adept at the game, this will become more and more difficult, with each player nimbly blocking rivals’ construction plans at every turn. This is where things become even more interesting. 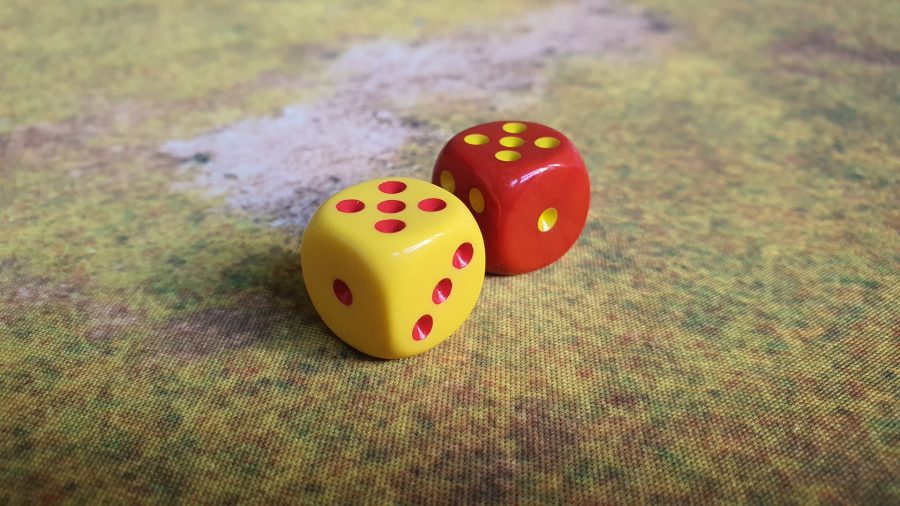 Like all the best board games, Catan’s core gameplay offers so many possible developments from player decisions and interactions, that no one strategy can ever consistently win the day. Nevertheless, here are just a few rules of thumb to keep in mind, that will help you build winning island empires.

Build where the dots are

In Catan, a sure-fire way to generate more resources than your rivals is to build your settlements adjacent to tiles whose number tokens have multiple dots on them.

The more dots a token has, the higher the probability of it being rolled each turn – and so the more frequently your adjacent Settlements and Cities will end up churning out delicious resources for you.

Basically, the most probable result on a roll of two six-sided (d6) dice is seven, and roll results become more probable, the closer to seven you get on either side. Catan uses the dots as a handy indicator of how far up that probability ladder each token is – so factor that into your start-of-game build choices. 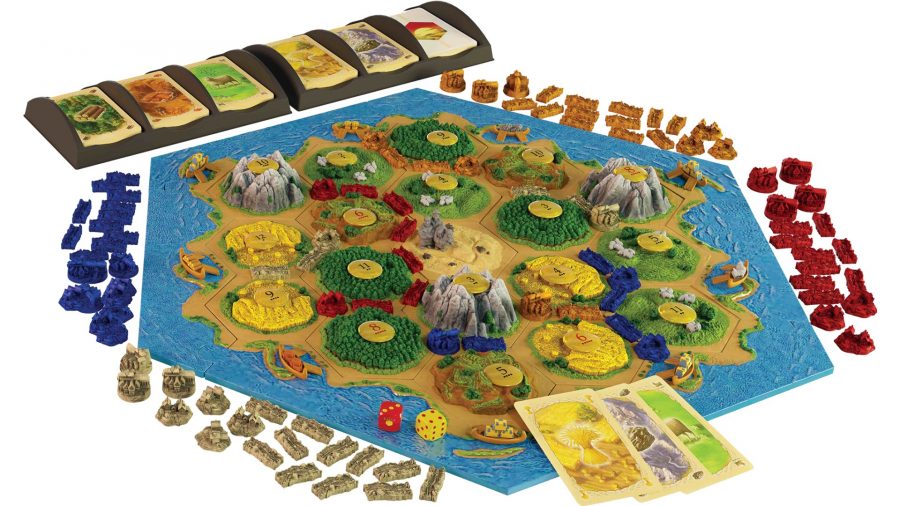 Be a resource baron

After you’ve graduated from the pre-set beginner game layout, and started playing Catan with a randomised map of resource hexes, the game map will often end up with two or even three of the same resource hex ‘clumped’ together.

Lonesome roads: These are the best single player board games

It’s something of a no-brainer, this – but make sure you build at the centres of these nexuses of a particular resource wherever possible. While there are various viable strategies for targeting certain resources through the game, if you can gain a monopoly over one of them (any one), it’ll give you a huge advantage – especially early on. 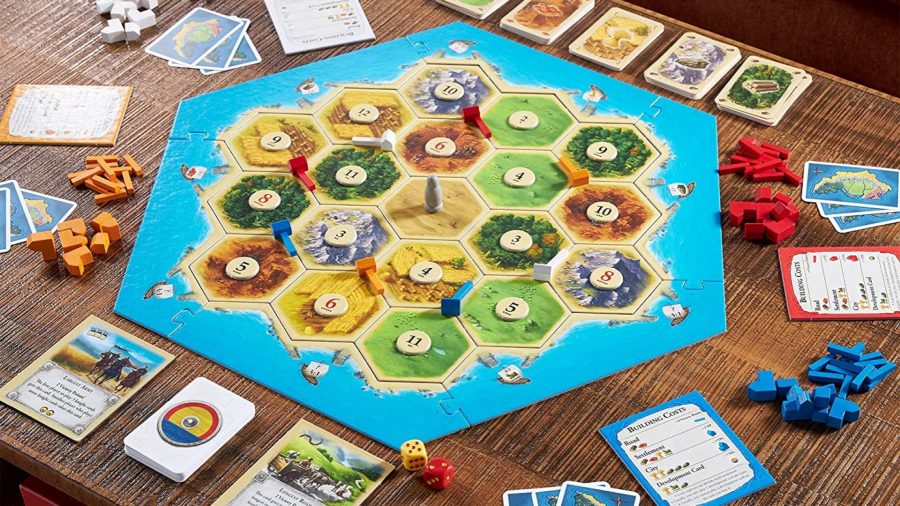 Usually, after the first several turns of the game, nobody will know exactly how many VP each player has, because most people will have picked up at least one Development Card – and that could always be a secret Victory Point Card.

In the latter part of the game, every decision counts

But, even with that unseen element to contend with, you can relatively accurately track the VP leaderboard by keeping tally of Settlements, Cities, the longest road, and largest army – and you really, really should. When it gets to the latter part of the game, every move counts – and knowing roughly how close your opponents are to the finish line can be crucial when deciding if it’s best to continue with your own strategy – or take a detour to take a rival down a peg or two, before they run away with the win.

And, with that, you’ve now got more than enough rules and strategic knowledge to sally forth into Catan with nous and confidence, whether it’s your first game or your fortieth. Get out there, land some deals, and settle some Catan. We believe in you.