Catan is a staple. Many players’ first introduction to tabletop games outside of Monopoly, few would contest its status as one of the best board games of all time. Robust strategy mixed with gamified luck, and a healthy dollop of player interaction, make Catan as much a joy on your first playthrough as it is on your hundredth.

But the vanilla game isn’t all that’s on offer. Over 25 years old, Catan’s had several expansions in its time. Some add minor mechanics, while others overhaul the focus of play; some are hits, while others are misses. You could enjoy Catan forever without any spin-offs, but if you’re looking to shake up your resource-trading, land-grabbing excitement, take an expansion pack for a spin.

To save you any false starts, we’ve created this list of the best Catan expansions you should try. And in the interests of playability, we’ve selected only those compatible with the latest edition of the base game. Largely, this amounts to those add-ons that can be used with the current version’s interlocking ocean tiles. Our picks also happen to all be available in retail stores, so you won’t have to go hunting through car boot sales in the hopes of a lucky score, either.

So, arrange the island tiles, and agree on what to call the resources (is it wheat, grain, or corn? Who knows?), because these are… 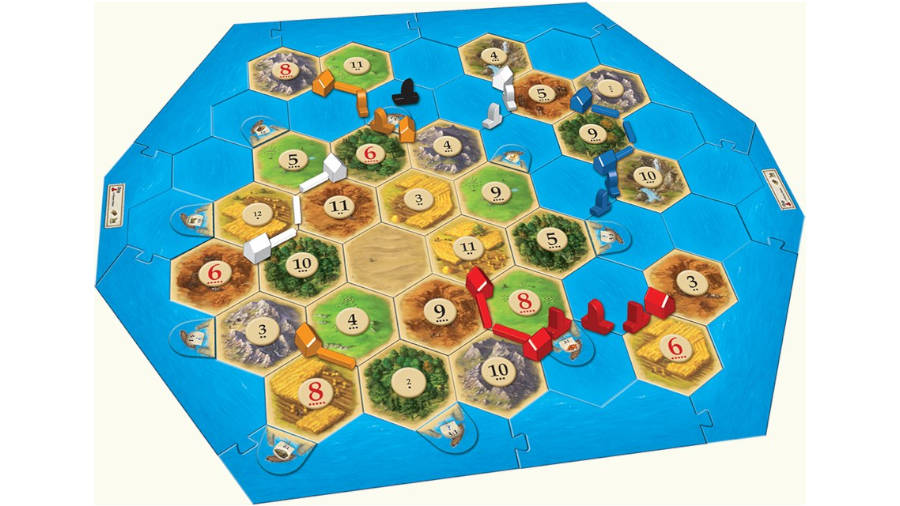 The first expansion to be released for Catan, and arguably the most essential, Seafarers does just what it sounds like it does: introduces ocean navigation. Build ships to hop between islands, and find new, fertile ground for your burgeoning colony. Seafarers does a good job of expanding Catan in physical size through complementary mechanics, without radically changing its focus.

Build ships to hop between islands and find new land

Ships act much like roads, but for water. Traverse the seas to find new land, and try to secure the longest line of vessels to earn Victory Points. But it’s the game’s dynamism that makes Seafarers so fun. Ships can sail to new locations after they’ve been placed, letting you switch up your plans, should a troublesome opponent steal that island you were eyeing. Mix in the added ‘gold field’ hexes, which grant any resource of the player’s choosing, and you’ve got a version of Catan that’s bigger, but no more complicated.

The balance of the power can quickly shift, as one player’s early game acceleration is eclipsed by the pioneering naval navigation of an upstart opponent. Seafarers is a great pick for those after new, but not demanding, gameplay additions. 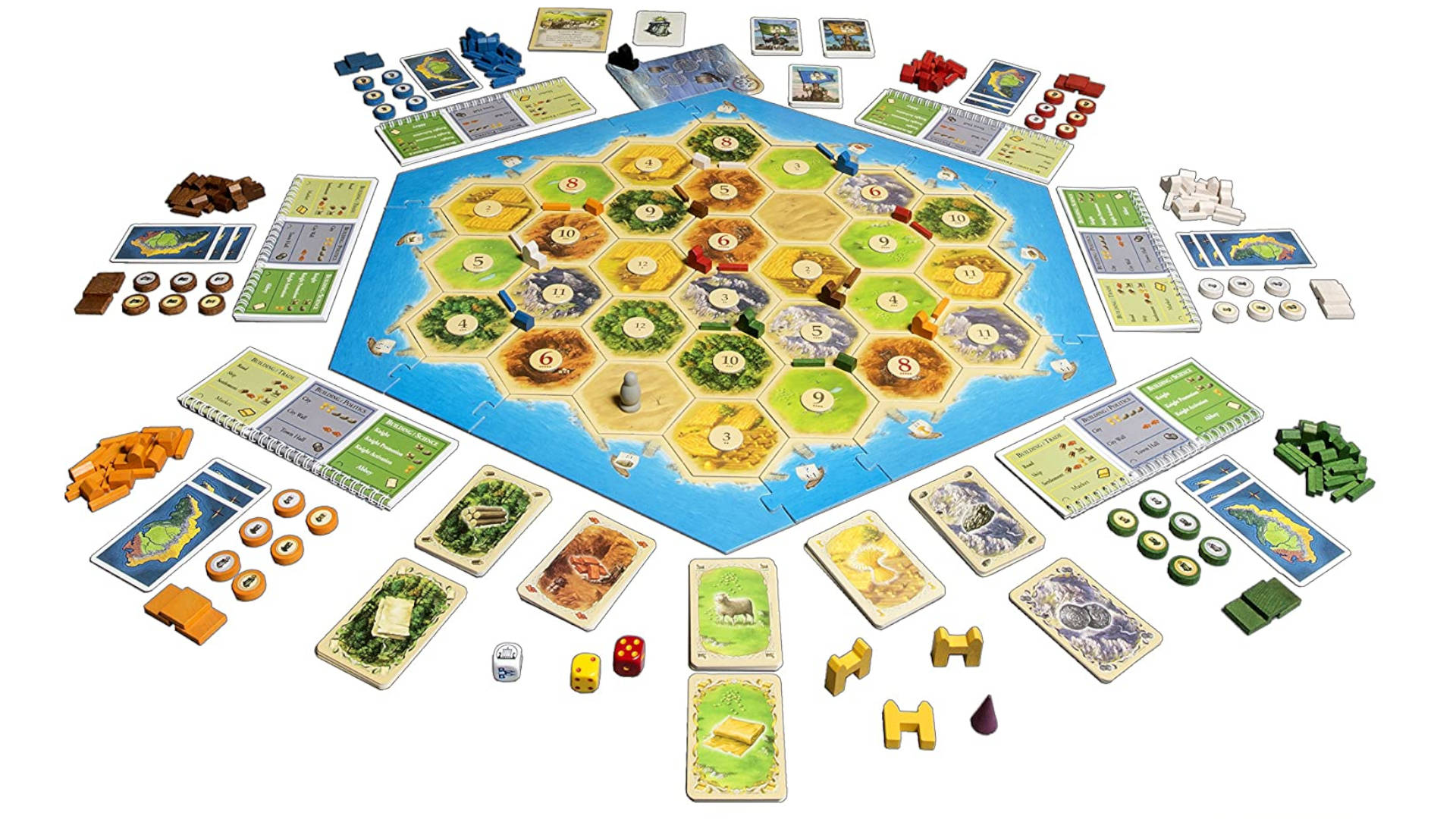 Catan’s beefiest expansion, Cities and Knights adds new mechanics to the base game, and replaces many of its existing systems with new ones of greater depth. Grander in scope, and more confrontational, expect your Catan games to be longer, more complex, and a touch more antagonistic.

The biggest immediate change is the introduction of commodities. Secondary resources produced only by cities, these add another layer of resource-collection to the game, and are used to unlock the second major addition of this expansion: city improvements.

Tabletop partners: These are the best couples’ board games

No longer merely tall settlements, cities can now be enhanced with additional structures, as players advance along three categories of enlightenment: science, trade, and politics. Each improvement grants special bonuses and abilities, and if you fulfil one construction path in its entirety, you’ll earn an impressive Metropolis for your trouble.

Development Cards are out, too, replaced by Progress Cards that are earned (you guessed it), through constructing city improvements. Distributed randomly through rolls of the dice, their powerful effects are more varied than the base game’s cards. Besides that, walls can now be built around your cities to increase your hand limit, and the pesky Robber is joined by the friendly Merchant, who grants a boon to your resource trade-in rate. 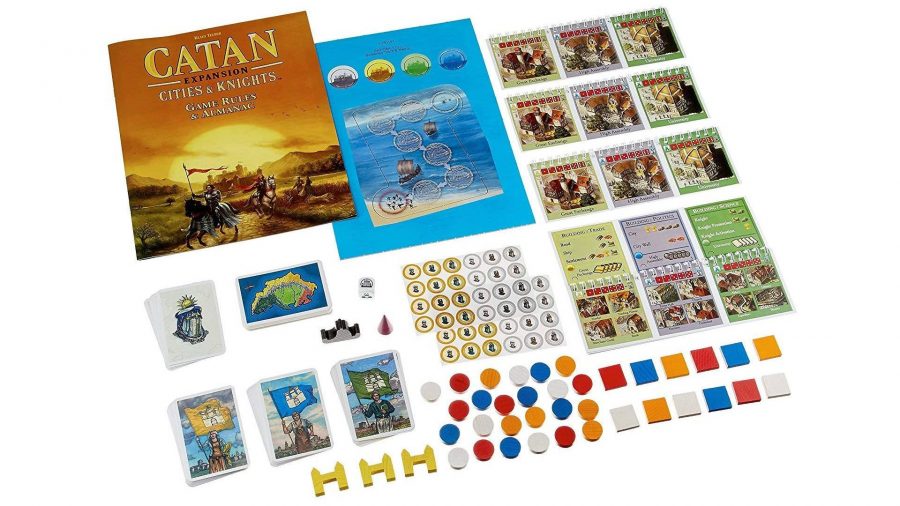 That’s a lot about cities, but where do the knights come in? Well, they replace the slightly obsolete soldiers of the base game, and can be recruited to block opponents’ roads, or kick out the robber who’s been swallowing up that vital ore you’ve been needing for half the game. And when barbarian ships arrive to raze your cities, knights will defend Catan, while earning the player who contributed the highest number of the heroic warriors some tasty Victory Points.

Cities and Knights adds a lot to Catan, changing not only its fundamental strategies, but basic rhythm of play. There’s more to do, more to think about, and another layer of metagame to consider. Try it out if you’ve grown a little too comfortable with Catan, and you’re after a challenge. 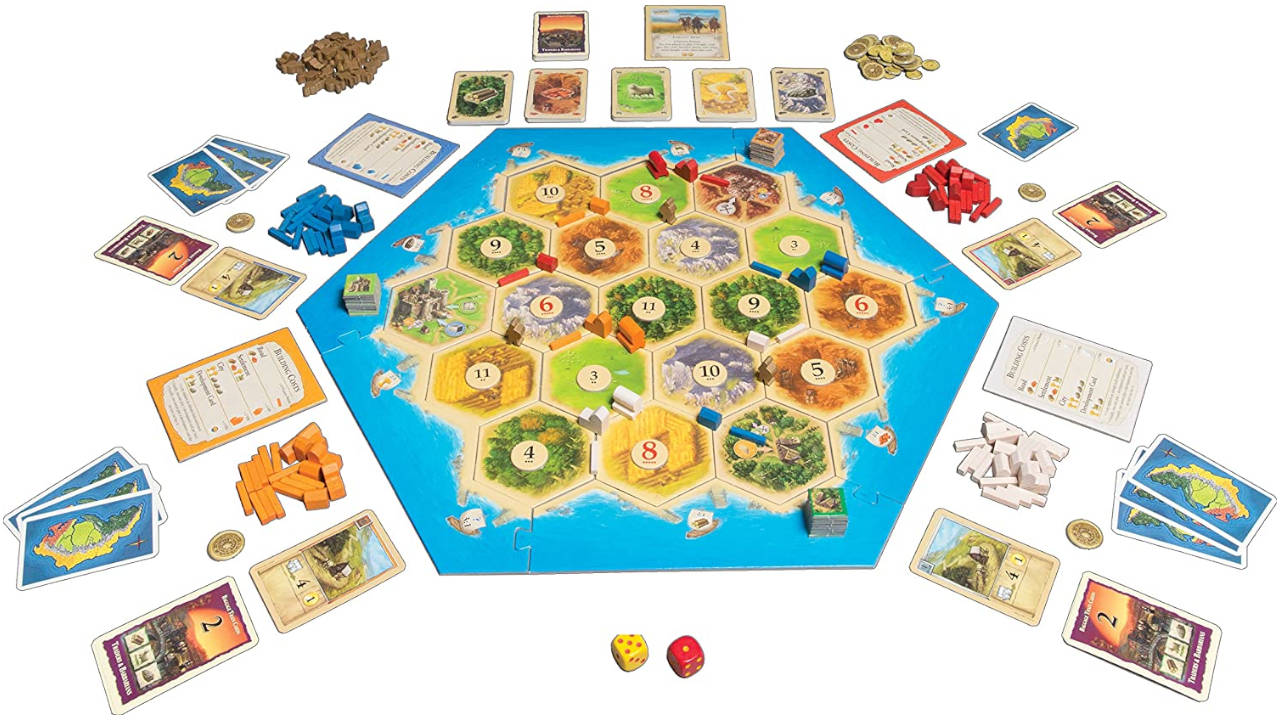 Traders and Barbarians isn’t so much a single expansion as a bundle of small add-ons, which can be variously added and removed in different combinations. It’s the most wide-reaching Catan expansion, insofar as it offers lots of ways to change the game with minor mechanical additions, but none will radically overhaul the basic experience. It makes for a fantastic way to lightly inject some variety into your settling.

Rather than handing you a jumble of new game pieces to play around with, Traders and Barbarians includes several scenarios for you to test them out:

Thinkin’ hard: Check out the best strategy board games 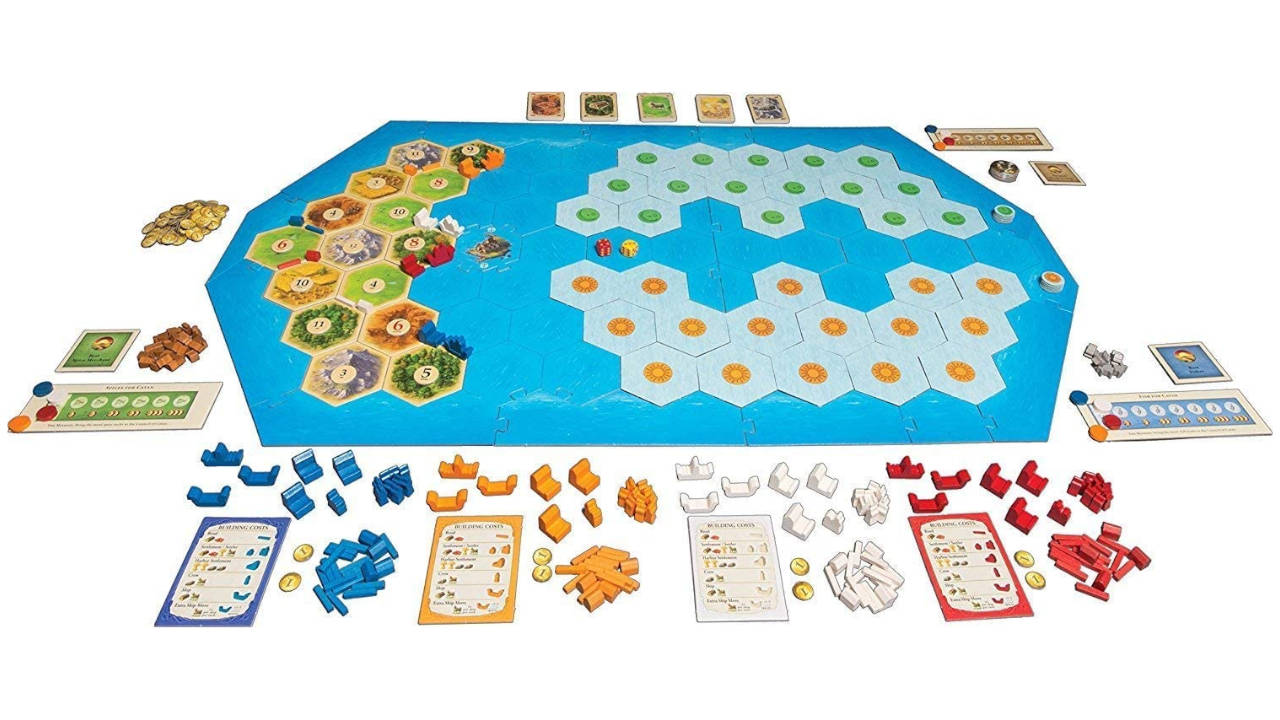 Similar in appearance to Seafarers, Explorers and Pirates centres on the ocean. But while Seafarers focused on navigating the open sea, this expansion centres on the bountiful shores that you might discover past the horizon. Two additional islands are added to the board, separated by water, and, in a nice twist, stay mysteriously face-down at the start of the game. Only by players ferrying settlers over to the islands will their land be uncovered, and their hexes revealed.

Transform your settlers and ships into port settlements, and colonise the islands for yourself. Catch fish in the sea, and unload your hauls at harbours to gain Victory Points. Or, enter the spice trade, and ferry the precious good between islands for a sweet reward. If you come across any pirate lairs, be sure to arm your fleet, and kick out the pesky hoodlums, earning some Gold as you embark on your entrepreneurial endeavours, which may be traded for resources.

All of the new rules are introduced through separate, pre-constructed scenarios, which makes learning the additions easy. But once you’ve mastered the alterations, combine them into a mega game of exploratory madness. Explorers and Pirates undoubtedly changes the feel of Catan, adding linear missions to the otherwise sandbox game. But there’s enough variety and scope for experimentation that things stay fresh. 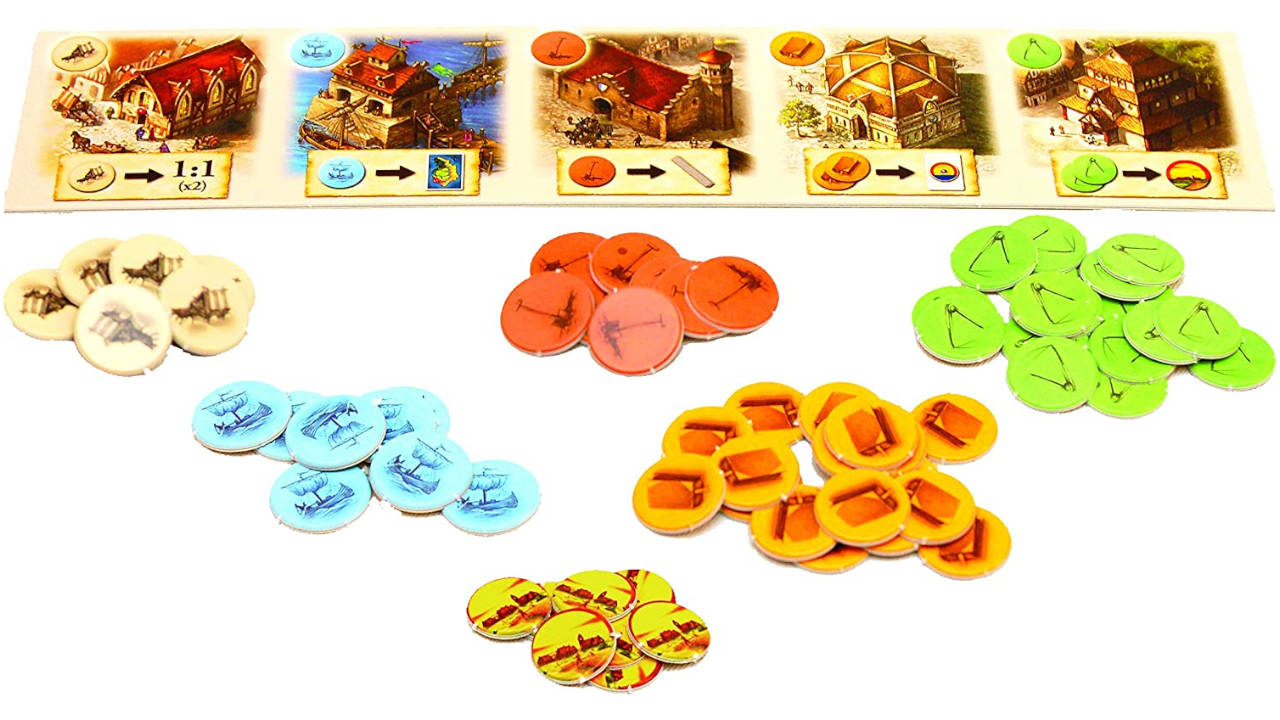 A small add-on rather than a major expansion, Frenemies adds some cooperative spirit to Catan, and gets you and your friends in an altruistic mood. A least, it pretends to. You’re still competing for Victory Points, but can feign generosity to temporarily help out an opponent, all for the ulterior motive of personal gain.

Earn favour with one of the five Guilds that have set up shop on the island by performing various tasks of such obvious charitable affection, that no one could question your motives. Move the robber to a neutral hex without stealing from a player, give away a resource card to an opponent in need, or connect your settlement network to that of an opponent.

All lined up: Our pick of the best tiles games around

But after you’ve lent a helping hand, redeem the favour at a corresponding guild for a hefty boost. You might nab a free resource, draw a development card, build a free road, or even take a free Victory Point.

Frenemies works so well because it makes a minor adjustment to Catan for radical implications. The dynamics of road-building and using the Robber change dramatically when you’re trying to support your opponent, but only so much to get the edge over them. Plus, Frenemies easily integrates with other, larger expansions, such as Cities and Knights or Seafarers. The add-on changes the way Catan is played, but doesn’t get messy when combined with bigger mechanical alterations.