So, you may not have heard, but way back when in ‘41, some not-so-great guys called 'Nazis' invaded the USSR. This made the local people pretty irritated, and some of them started bushwhacking the Germans during their occupation. It’s some thrilling and poetic stuff, and it’s surprising that there haven’t been any games based on it (that I know of) until Partisans 1941 came around.

Reminiscent of the pretty good Shadow Tactics: Blades of the Shogun, Partisans is notably more action-focused. Where, in Shadow Tactics, a wrong step would get your guys killed pretty quickly, in Partisans you can actually have gun fights against the Nazis and not get instantly owned.

So how does a real-time stealth-action game translate to the Eastern Front? The story follows one Commander Zorin, a Red Army officer, who is captured by the invading German forces, but manages to escape in the first level, which is good because this would be a very short game otherwise. On Zorin's way out, he stumbles into one of his men and a local boy, who takes the group to a hideout in the swamp.

This hub can be upgraded in between missions to allow your soldiers to forage for more food, customize weapons, and go complete off-map operations to get more resources, among other tasks. The hub isn’t particularly deep, but it does offer a nice extra layer to the real meat of the game: the missions. 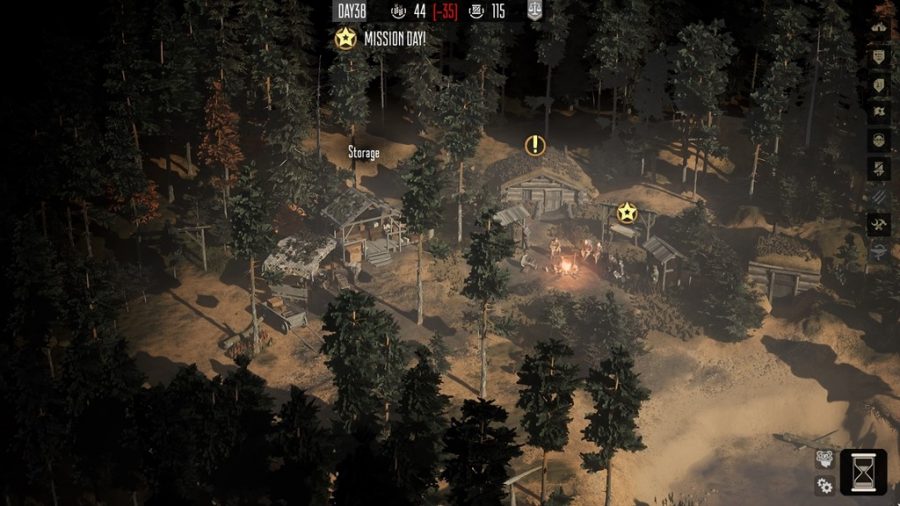 From the hub, the gang conducts various partisan-y missions, such as ‘blow up an enemy tank’, ‘save fighters from being hanged’, or my favorite so far, ‘poison the Germans with poison hidden in a beehive’. The missions have a good amount of variety to them, and while there aren’t many ways to complete most of the tasks, there are many ways to get from point A to point B. The maps generally have at least 2 ways for you to approach your target, if not more, with your squad able to sneak through buildings and bushes on their way to stab someone.

each character has special abilities tied to their weapons of choice

Speaking of stabbing someone, there’s a bit of variety in how your growing band of partisans can subdue their foes. Your main man, Commander Zorin, is the best overall at sneaking, with a throwing knife he can execute Nazis at range. The young lad who accompanied you to camp can get a slingshot that will stun your targets, and another young lady can just chloroform Nazis. These are all skills unlocked through a relatively adequate skill tree for each fighter. Most of the upgrades are things like ‘kill a guy with a knife faster’ or ‘get a better hit chance with this type of weapon’.

I am a little disappointed the skill tree isn’t more free-form, but each character has special abilities tied to their weapons of choice, as the submachine-gunner can spray a small area, killing everything in a cone. So I guess it’s not so bad; but not my preferred option. 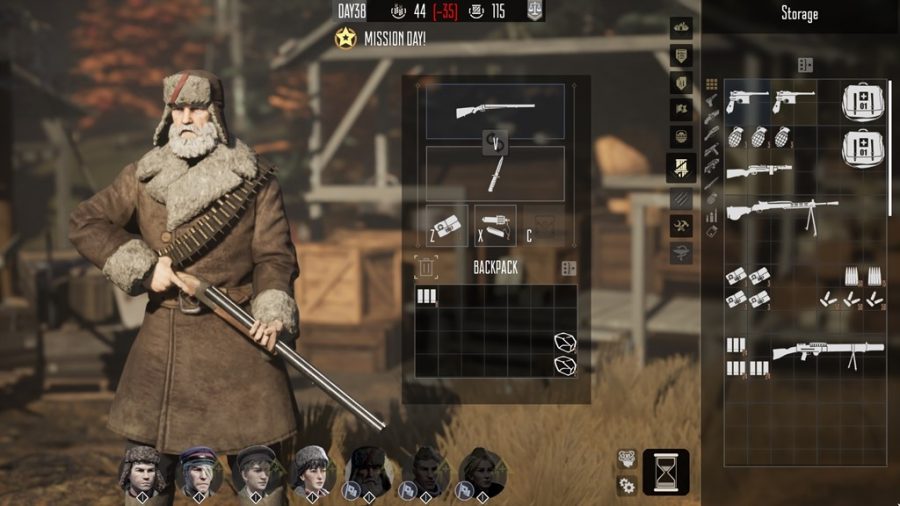 Every one of your fighters is unique and can’t be killed or the mission is lost, so you don’t have to worry about having a niche suddenly become unfilled. You’ll acquire more characters over time, and will learn to care about your band of ragamuffins. The writing for the gang isn’t too bad, though you may get tired of hearing about “hide-and-seek” when your fighters duck into cover.

War’s not over yet: Choose from the best WW2 strategy games

Overall, outside of a couple cringe-worthy lines of dialog, they are pretty solid, if not particularly deep, stars of the show. But I do have to say, it IS pretty wild hearing your fighters speak like working-class Englishmen when the Germans speak German accented English or just straight up German. Frankly, you will grow to like them more from pulling off daring plans than you will from their writing, but that’s perfectly fine. 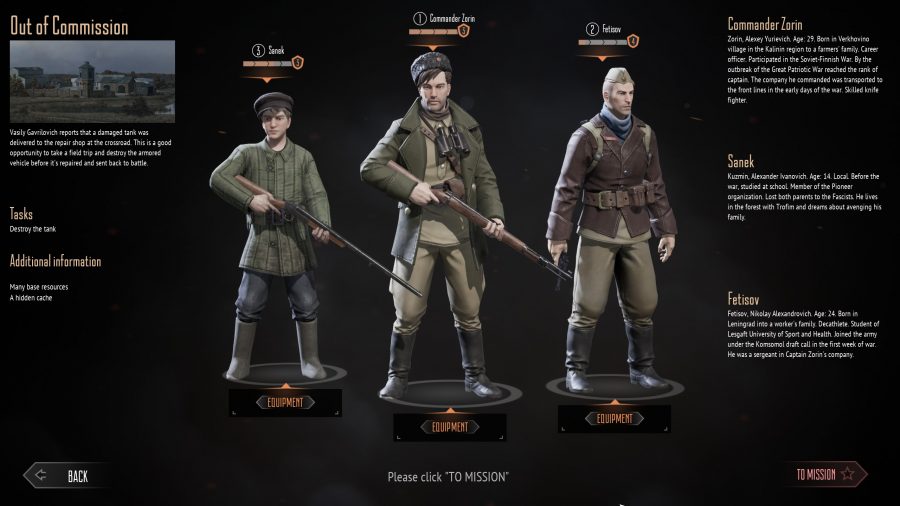 So, as for the actual mechanics of the sneaking and stabbing mentioned above, the basic rules of stealth are pretty simple. You hide in a bush or behind a building, the Germans can’t see you. You hang out in the open or start shooting, the surrounding Germans can see you.

The best part of Partisans is the art of the ambush

So the goal of most encounters is to delay the ‘Germans seeing you’ part as much as possible, as your partisans will ALWAYS be outnumbered on the map, as you can only have 4 fighters running around at a time. They are capable, but the AI is good at surging into a location and flanking your position, meaning that if and when you DO decide to ‘go loud’, it’s better to do it on your terms, and in a fast and violent way.

Which leads me to the best part of Partisans: the art of the ambush. Most enemy units will mill around in locations that do not have fantastic sightlines, or good areas of cover right next to the fighting, so the smart player learns to improvise to bring the enemy into a vulnerable position. Sometimes, this can be accomplished by waiting for patrolling members of a checkpoint to walk away from a lone guard who’s just close enough to a bush. Other times, a well-timed grenade can eliminate a whole squad at once, without the need for gunfire. 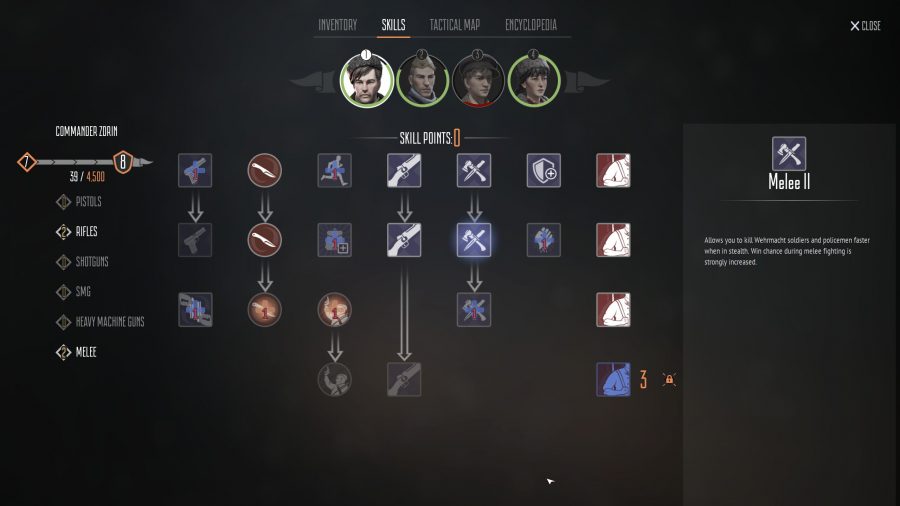 My personal favorite flavor of ambush though is setting up a tripwire mine on a patrol path in an open area, so the explosion will kill a group, and any other soldiers who hear the explosion will be drawn into an area without cover. This can be particularly tricky to pull off, as sound in the game is not an exact science, with no way to tell how far a sound will travel (I’ve had a gunfight on one end of my screen be ignored by Germans at the far opposite end of the screen), but getting the timing just right with help from the game’s slow motion system and eliminating a large portion of the enemy without taking a single scratch is extremely satisfying.

Like your tactics tactile? Check out the best war board games

Which brings me to the other complications: doors. Oh, how I hate doors in Partisans. They will never, ever do what you want them to on your first click. Want it closed? How about we open it the other way. Want it opened? Nah, not today mate. Want to walk through a door? How about we close it and walk into it instead? This, combined with a frustratingly small hitbox for many items on the map that you need to collect for more ammo, bandages, and the like, makes some of the UI difficult to work with. 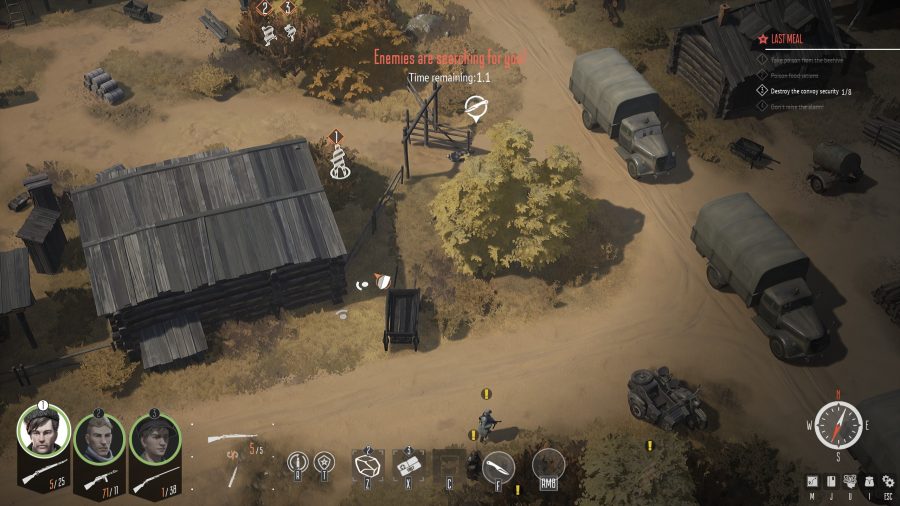 My only other major gripe is that cover, an incredibly important part of the game, is pretty restrictive with what counts as cover. Not being able to hunker next to an open door has created several obnoxious scenarios that feel uniquely ‘game janky’. As someone who has played Company of Heroes and XCOM, I feel like the bar for what a good cover system looks like is pretty high, and Partisans doesn’t quite make the grade.

All in all, Partisans 1941 manages to be… pretty good. It offers a great, if simple, stealth experience, really good combat, fantastic ambushes, middling story, and some offensive doors. I can say that I’ll definitely be returning to the game after I’m done writing, which isn’t something I can say for every game I write about. The thrill of pursuing the perfect bushwhacking calls to me once again.

Partisans 1941 is available to buy right now from Fanatical.