Coming away from Rule the Waves 2, I realize that I’ve never had a more engaging or heart pounding time looking at data and numbers on a screen, except perhaps during tax season. To the outside observer, like my wife who wandered by, glanced at the screen and asked, “I thought you were working on your game review tonight?” RTW2 might look at little esoteric, perhaps a little too much like the work players hoped to avoid by firing up a video game at the end of a long day. And to some it might actually be that, but I’ll wager anyone currently reading this review with even the slightest interest in naval warfare in the age of steam, iron, and eventually airplanes would do well to check out RTW2.

In RTW2, like its predecessor, you take on the role of an especially long-lived ‘Grand Admiral’ who is responsible for: organizing naval research, designing new ships, fighting the nation’s wars, personally commanding fleets, and deciding a surprising amount of foreign policy. Did I mention you also wrangle with the budget, the prestige of the navy, and uppity neighbours?

It’s a full plate, but the majority of your time will be spent building and managing your nation’s fleets. Play oftentimes feels like a desperate game of “keeping up with the Joneses” as your closest rival lays down a shiny new battleship with 12-inch guns making a mockery of the 9-inch simpleton you just commissioned.

The struggle of one-upmanship and chasing the dream of a Fleet in Being is one of the things I enjoyed most about RTW2. 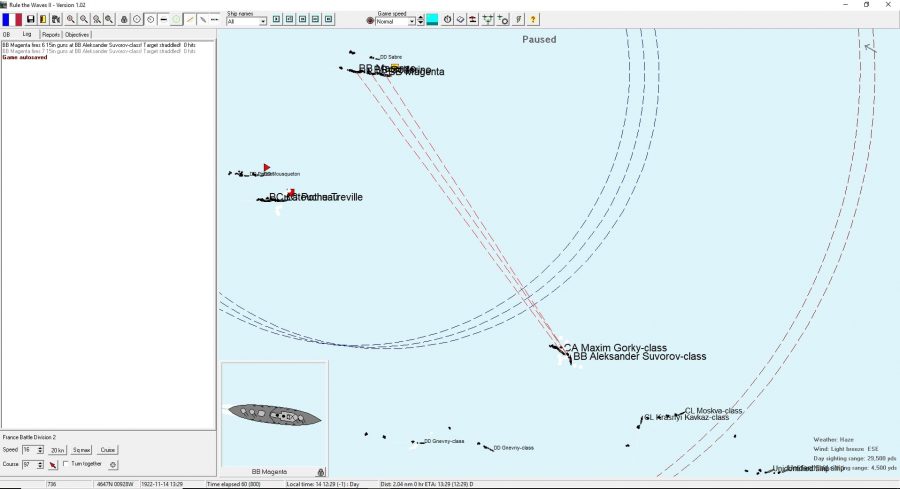 Playing initially as Japan in the earlier start date (1900 vs 1920) with a historical budget meant I had to walk a tightrope of acquiring new technology, weighing the cost of refitting against building new vessels, and worrying about the downtime in which my beloved if underwhelming battleships were strung up in port, getting shiny new guns but unable to defend my shores. The rate of technological development and the game’s clever technology tree forces you to decide on priority research in different areas, like ‘torpedo technology’ or ‘fire-control systems’ with semi-randomized discoveries (an option for further randomization exists if you want it).

RTW2 throws a lot of information at you, some of which will require research

This means it is impossible to game the system completely and beeline straight for the best technologies. We all know that carriers and naval aircraft became a dominant force during the Second World War, but in the 1920s there was a lot of soul searching to do and RTW2’s system of semi-random development reflects that quite well.

Also, the fact that so much technological development happened in such a short period means you will have some tough decisions to make while playing. Often times you’ll be half-way through your government mandated queue of a half-dozen new destroyers when your researchers develop a new technology that renders them all subpar. Therein lies a wonderfully stressful gamble between actually putting ships in the water and chasing after the latest tech. If only that dang government would increase the naval budget! RTW2 throws a lot of information at you, some of which will require research, but it is manageable after a few minutes and seeing what your opponents are building. 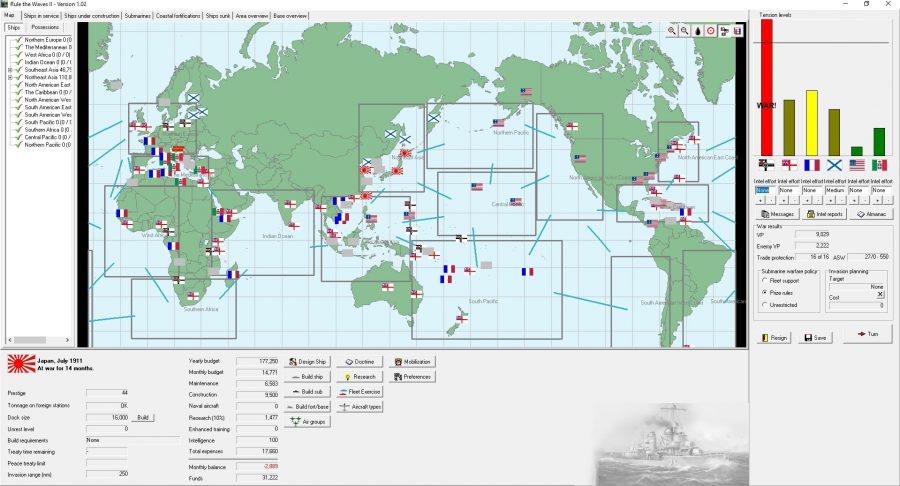 Ah, but that’s where your forays into foreign policy come into play. In an interesting system that I wasn’t sure about at first, you’re never really making proactive policy or engaging with other nations, you’re only reacting. On each turn there’s a chance for an event to pop up for you to deal with. They’re not entirely random but there seems to be an element of chance in their occurrence. How you deal with them will affect your tension levels with different nations, your prestige, or your budget.

Muster the fleet: These are the best naval games around

Upon seeing a brand new Russian cruiser come to port to show off, I was given a choice of responses for an interview, going with something along the lines of, “Well we could have nice things to protect us too, if the government cared about security” which both made me smile over its pettiness and over the fact that it resulted in a potential for an increased budget. 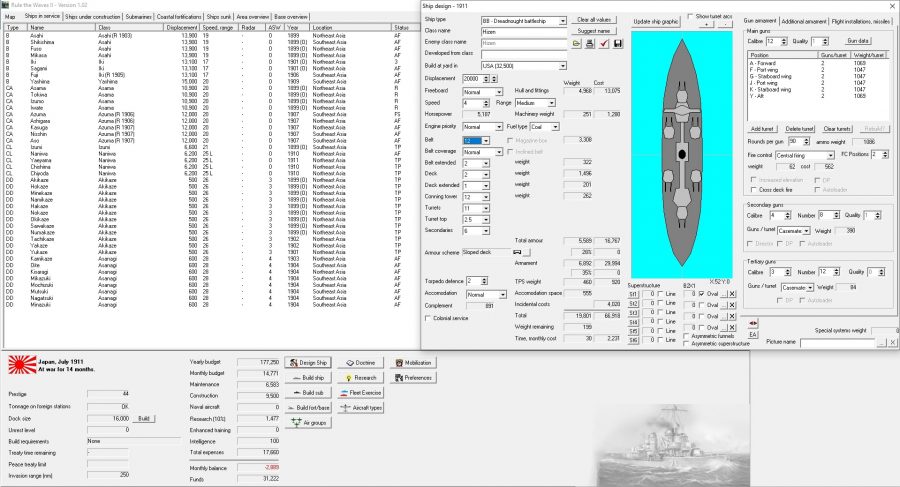 Similarly, while you can push towards war by choosing the right responses, you don’t actually make the decision, and the decision to end a war will be made by the government, who only ask you your opinion on the ability of the navy to keep up the good fight.

RTW2 gives you a great sandbox to play in, with a different experience waiting for you each time. In my current Japanese game, now in 1911, We’re embroiled with a third war against Germany, who decidedly didn’t like my nighttime sneak attack against their port in China back in 1902 and have been hounding me ever since.

Alternatively, in my 1920’s start as France, I decided to go full Napoleon and try to conquer Europe, only eventually being brought down by an especially daring Italian led coalition. RTW2 creates an emerging and engaging narrative that is every bit as fun to lose yourself in as other games that may be a little more visually spectacular. 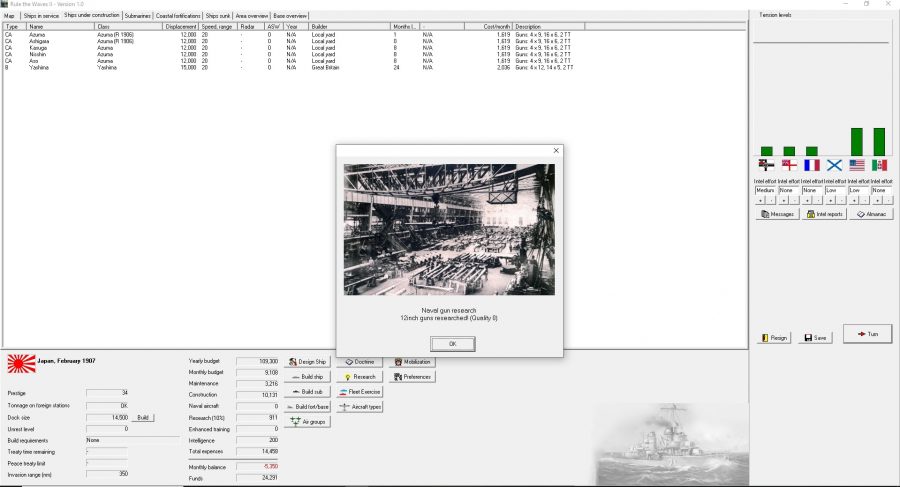 But now for the technical. RTW2 is ugly. It is a series of spreadsheets, a clear but dull world map, and a tactical combat map that, while impressive in its scale, is entirely made up of blue, grey, and green shapes overlaid with text.

Period pictures are peppered throughout to give a bit of substance to the menus, and there is an exceptional little visual designer for your ships if you’re so inclined. But the lack of visuals never bothered me. The amount of information available to you is staggering, and the depth of the design and combat mechanics make it clear that visuals were sacrificed for efficiency and depth.

The Steam & Iron system that RTW2 uses for its tactical battles feels perfectly equipped to handle what RTW2 throws at it, and even the larger fleet engagements are manageable once you’ve given yourself a minute to glance at the manual or check out a Youtube video. Ships should perform the functions they did historically, and the combat feels authentic with the right feel of cat and mouse.

When you’ve managed to corner an enemy battleship and can go in for the kill, or when your lone armoured cruiser fights a desperate rearguard for a fleeing trade convoy, you feel a thrill that only comes from games that force such an investment in time, resources, and energy into each ship. It was rough finally losing my grand French fleet off the coast of Sicily, but it was equally thrilling to sink two Russian battleships in open combat the engagement before. Airplanes helped. 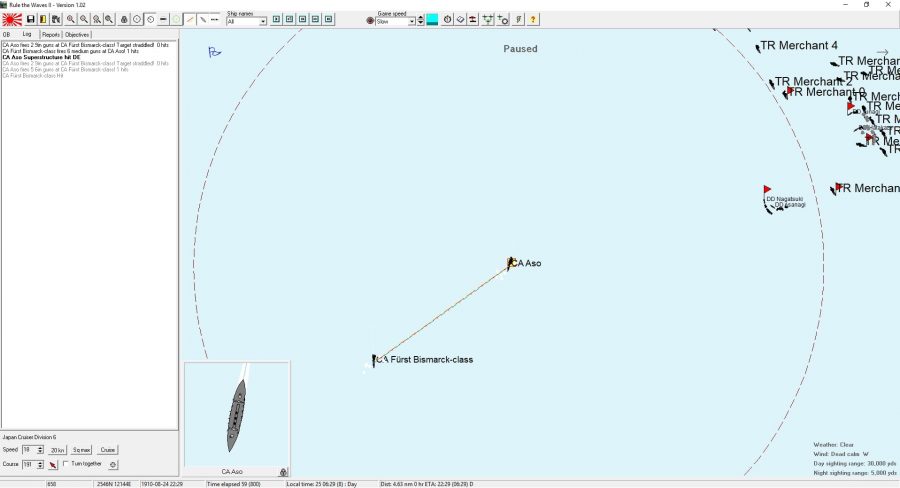 Oh yes, the elephant in the room for players of RTW1. There are now aircraft, both planes and lighter than air ships available, along with different types of carriers to be built or converted. I didn’t have as much time with the airplanes as even my game set during the 1920s start was slow to build up enough aircraft for them to be a useful force, but considerations for air warfare add to the expanding list of decisions you are forced to make.

air warfare adds to your expanding list of decisions to make

Carriers also go hand in hand with the game’s new treaty system, which can bind players to certain tonnage limitations in a blind stab at world peace, though craftily creating smaller ships that can be re-purposed later is always an option (same with fudging the numbers if your government isn’t on the up and up).

I only occasionally saw bugs, like the Royal Navy laying down a ship with a complement of anti-aircraft guns in 1902. Highly suspect, Admiral Nostradamus. But there are reports on the forums of others I have not experienced.  I understand some players may be put off by some of the game’s hands-off systems. It is no longer possible to paint the map your colour, as invasion range limitations force you to squabble over neighbours and colonial possessions rather than conquer the world.

Similarly, the game’s system of randomizing which elements of a fleet actually find each other to engage in each battle might feel arbitrary, but I felt it kept battles fresh and forced some interesting engagements and felt true to the many examples of squadrons bumping into each other or lone raiders sneaking in for a kill.

Overall, I adore Rules The Waves 2. It does everything I think a strategic naval game set in this period should do, with enough changes for the better from RTW1 to make it worth the upgrade. It’s clear that a lot of passion went into this game and I know I’ll be spending quite a bit of time in the near future chasing that elusive decisive battle, and the ships that can win it.