Back in January, I gave some early access impressions of Terminal Conflict, the Cold War themed strategy game by developers BL-Logic and Strategy Mill. Much of what I wrote back then is somewhat redundant. That’s because the developers have spent the past ten months making fundamental changes to the game’s core mechanics, refining the UI and adding other quality of life improvements. Terminal Conflict left early access recently, so we decided to take another look at the game to help you decide whether to add it to your wargame library.

Much of Terminal Conflict’s core systems remain, in some form. There are still five resources which broadly constitute your domestic interests (finance, people/citizens, elites/specialists, military and government). These resources act as currencies which are used to purchase items and undertake actions such as intelligence missions, rebasing military units and enlisting a leader’s support. Managing these resources is a central theme of the game. If one interest group gets too much or too little power, it will initiate a crisis.

The semi-random national focus system (which I praised in my preview), is still in place. So too the abstracted military system (which I disliked). But both of these systems have been overhauled and for the better. There’s a little less board game, a little more video game, and more strategic and tactical posturing. Taken together, the changes have made Terminal Conflict one of the most engaging strategic level Cold War experiences available.

The focus management system has always been at the core of Terminal Conflict’s gameplay. However, focuses are no longer a set of objectives which net victory points if achieved within a specified timeframe. Instead, they have become the game’s resource engine, giving players a set of bonuses that last whilst the focus is active. This is the main way player’s gain domestic interest points to spend on actions. 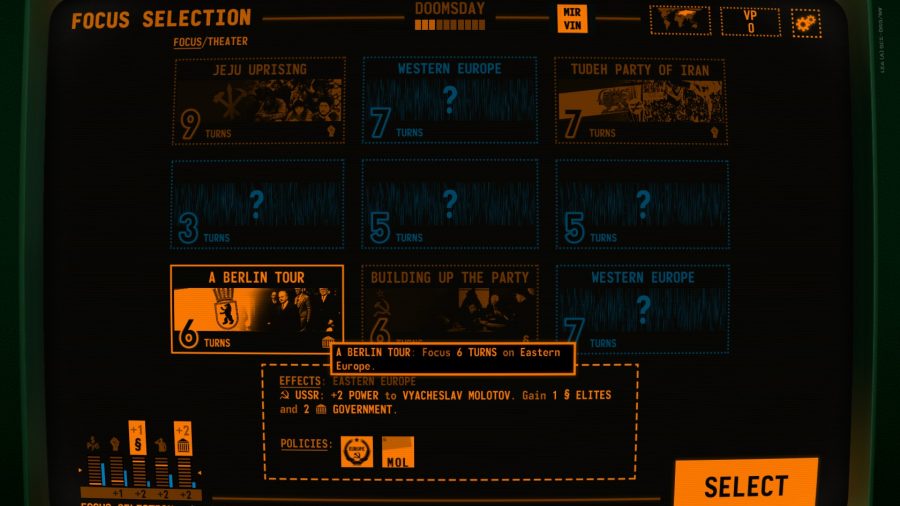 Focuses also kick off historical events or conflicts, enable certain policies to be enacted, and define the geographic area of contention between the competing superpowers—military actions can still be taken outside of the current focus theatre, but have additional costs associated with them. As before, players alternate selecting a focus—with the USSR selecting first, both at the start of the game and where players are tied for victory points. When there are no more focuses left to select, the game advances the timeline forward five years (from 1946 through 1991), and the process begins again.

Some focuses are based on historical events or crises, whilst others are fictional

The group of focuses presented to the player at the beginning of each new timeline is semi-random. Some appear during certain timelines, others throughout the game. Some focuses are based on historical events or crises, whilst others are fictional but thematically relevant. It helps replayability, as your choice of focus becomes reactive—based on your current needs, the geopolitical situation and your long-term interests.

Each time a focus has been selected players must then decide on a posture: either ‘arms race’ or ‘disarmament’. If both players select disarmament, all military units are placed back in the player’s reserve pool; the Doomsday clock is reduced and any warzones within the theatre are declared resolved. If both players select arms race, military operations can be undertaken within the theatre at a reduced action point cost. 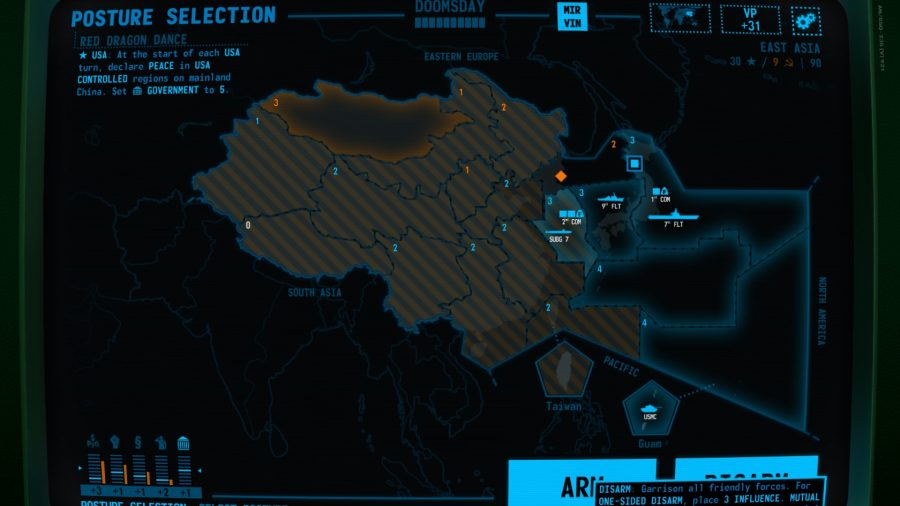 More importantly, any incursions into an enemy controlled region, become warzones. If each side declares opposing postures, then the side that selected disarmament gets influence points to place on regions within the focus theatre. Postures are selected simultaneously. Your choice, like most choices in this game, is based on imperfect information, your own short/long term plans and anticipation of your opponent’s moves.

The differentiation between warzone and non-warzone regions is crucial to Terminal Conflict’s gameplay. Warzones are the only regions where military units can be destroyed. When units clash, outside of warzones, they can be forced to withdraw from combat or be put into a state of reorganisation or engagement. These latter stances disrupt a unit’s ability to move, make them vulnerable to further attacks and disable their passive abilities. 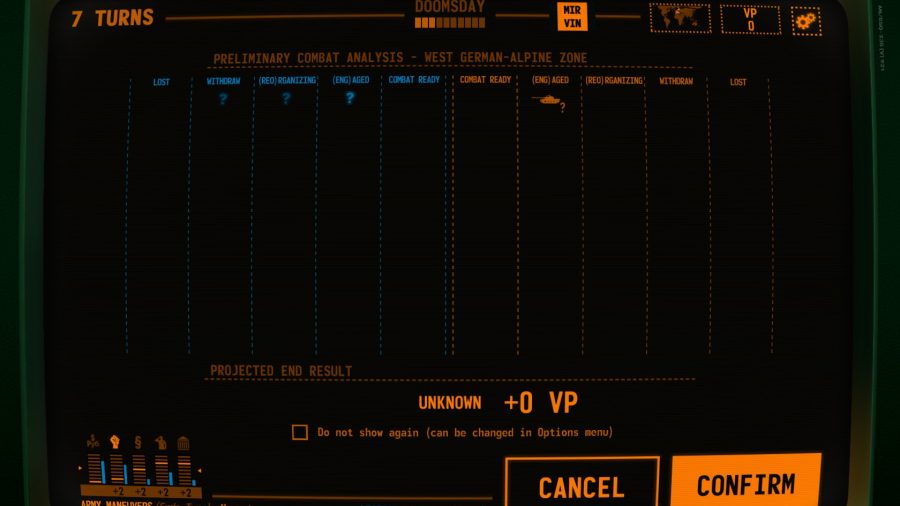 This system better represents the probing confrontations of the Cold War; the one-off airspace incursions, naval showdowns, and limited conventional weapon confrontations, that did not spark full scale wars. Unlike other games that attempt to portray the Cold War, the combat system in Terminal Conflict is not an all or nothing affair.

Unfortunately, the combat itself is still somewhat abstract. Unit selection is still limited to army chits, fighter or bomber air-groups, submarines, surface vessels and aircraft carriers. Battles are still resolved through a rock-paper-scissors type contest, and the specific military hardware that defined the period is nowhere to be seen. The reworked combat system has done enough to make it tactically interesting, but for me (subjectively speaking), it is still the game’s biggest weakness. I keep thinking combat leans too heavily on board-game design principles rather than those of a video game.

The same can be said for the Space Race. It is little more than a track of milestones that players move along. You click a button, spend military resources and gain a bonus to espionage—and some victory points if you were the first player to complete a particular milestone. There’s no chance of failure, no ability to build infrastructure or implement space programs to help improve chances of a successful mission. It feels far too linear. 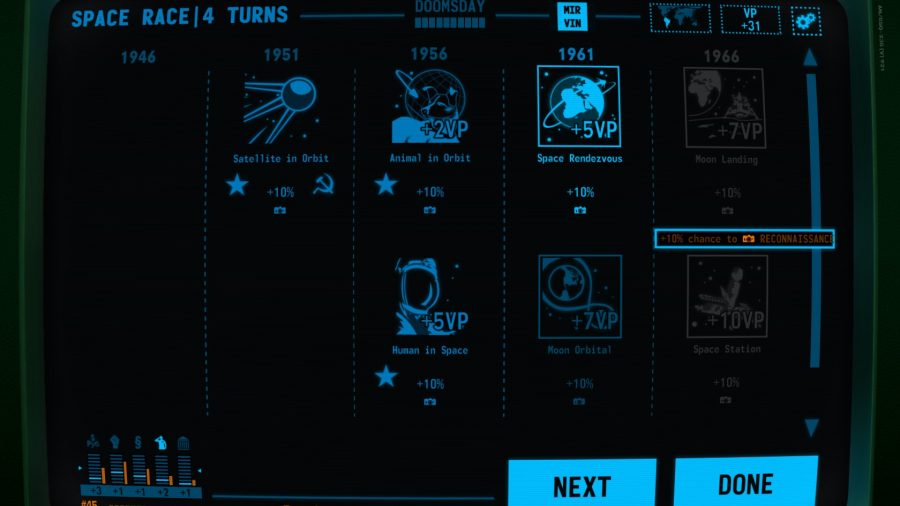 Similarly, technology is limited to a series of nuclear related upgrades and warhead production bonuses. Unlike the Space Race however, the abilities these upgrades provide feel significant—launching nukes from a submarine platform makes finding subs that much more important in the mid-to-late game. I just wish there was technology for other branches.

The intelligence system in Terminal Conflict is fantastic. There are a handful of operations that can be undertaken to reveal your opponent’s resource pool, assassination attempts against leaders, coups and infiltration operations (which provide ongoing reconnaissance of units stationed in a region). The system is useful without being annoying. You don’t need to spam operations and any unsuccessful operation ends your turn, so there is a risk/reward dynamic to the mechanic. 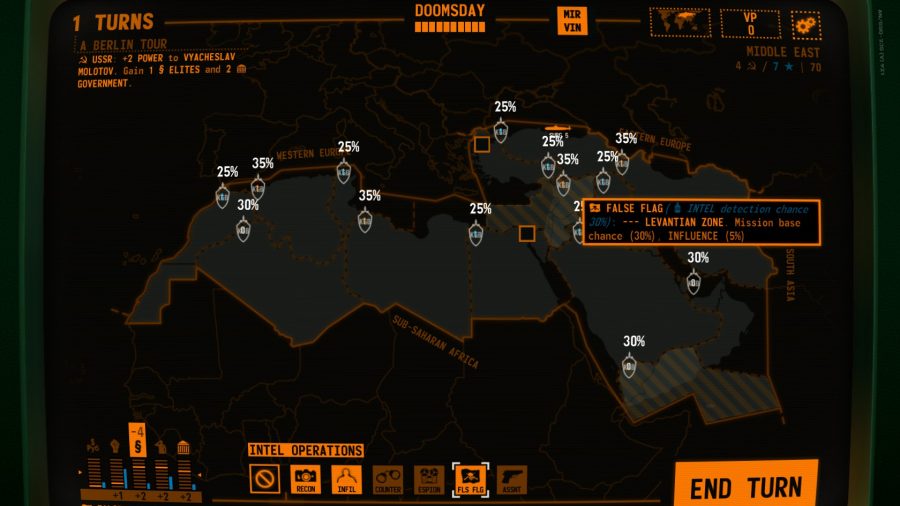 Terminal Conflict’s AI is reasonable but not without its problems. In my various playthroughs it sometimes feels as though the AI goes to sleep for a few turns. This is especially noticeable after the AI’s early timeline activity. It also seems to ignore the Space Race after the launching of Sputnik.

Multiplayer is an altogether different experience. In the few matches I played against others, the entire dynamic of the game changed. Multiplayer is ultimately where Terminal Conflict shines. It is easy to connect to games with your friends and there is also a matchmaking ranked system available. Though finding another player in the ranked mode can be difficult, as there seems to be a somewhat limited playerbase. With that said, you can usually find a match on the game’s Discord server. As an aside, one frustrating omission in multiplayer sessions is the lack of a savegame function.

The subtleties of Terminal Conflict’s rules make it engaging but also difficult to learn. A lot of this is mitigated by tooltips and the in-game encyclopaedia, but there is a learning curve involved. That’s not a criticism of the game, but the game does seem to struggle in explaining itself to the player. The developers have recently implemented a tutorial, but if I am frank, it still needs some work. I found the tutorial vague in defining my objectives and in need of more scripting to be of real value. 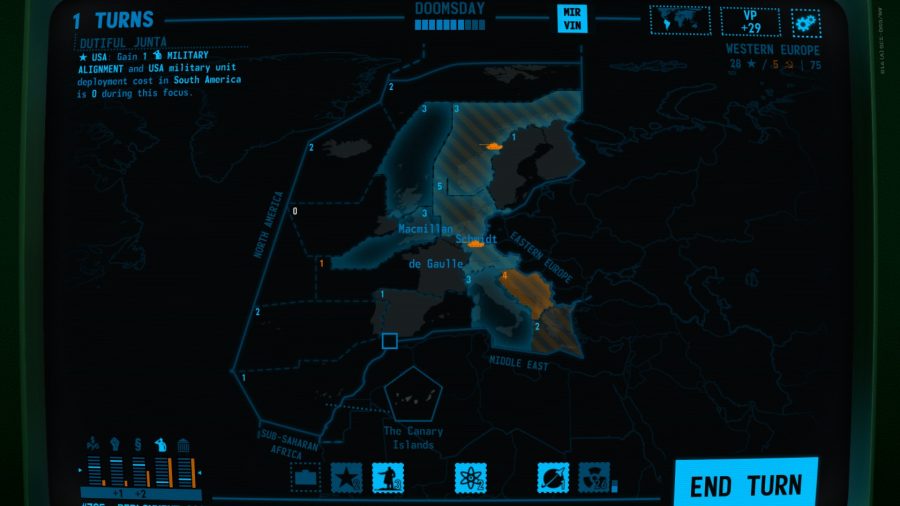 Despite leaving EA, I get the feeling that the dev team has not finished with the game. Speaking with the Lead Designer, he explains that they plan to continue balancing the game whilst adding more content: including new policies, events and the diversification of leader abilities. Indeed, post EA the game continues to receive frequent updates, with new content and bug fixes. Speaking of bugs, I have not come across anything major. The game has been stable and without any major crashes. Likewise, multiplayer has also been stable.

The AI may not offer much challenge to the single player

Terminal Conflict is certainly a better game now than when we previewed it during EA. It has tried to strike a balance between boardgame and video game, finding its own identity along the way. It’s engaging, well designed and made with a passion for the period. It delivers as one of the best strategic level Cold War experiences, up there with Twilight Struggle—and there is definitely room in your library for both games as they play very differently.

Ultimately, I recommend the game to people looking for multiplayer gameplay, they will find a lot to like with Terminal Conflict. However, I do have concerns that the AI will not offer much of a long-term challenge to the single player—at least not yet. To them I advise a little more caution before purchasing.

Leon is a freelance journalist, history fanatic, armchair general and TCG tragic. If it’s a strategy game, chances are he’s played it