Back in June 2014, the little Ukrainian software company Game-Labs LLC and designer Nick Thomadis produced a gem of a Civil War battle game on Gettysburg, 1863. It had a similar feel to Creative Assembly’s ultra-popular Total War (TW) series, which should come as no surprise, as Thomadis has long been known as the king of TW modders, primarily due to his preeminent DarthMod AI improvement system.

How appropriate that now, on July 14, 2017, just as the Colonies seem so eager to re-fight the “recent unpleasantness between North and South”, Nick and the lads have released the second game in the series – Ultimate General: Civil War.

Just focusing on the one iconic battle, Ultimate General: Gettysburg’s creative juices went into adding prodigious detail to the gameplay and visuals, with historically correct units, commanders and terrain, day/night phases, smart unit controls and more. This sequel takes on the whole bloody business, with a wider range of internecine battlefields to take, and an overarching campaign system in which to march your becapped, wool-clad armies from one to the next (among other new gameplay elements).

So, if you think this is just Ultimate General: Gettysburg with a bunch of extra historical battles to fight, guess again. Rather, it is the latest of what I hope will be numerous additions to a series which, in my view, is exactly what the Total War series could (and should) have been: historically accurate with a healthy garnish of elegant simplicity. Let me show you what I mean. 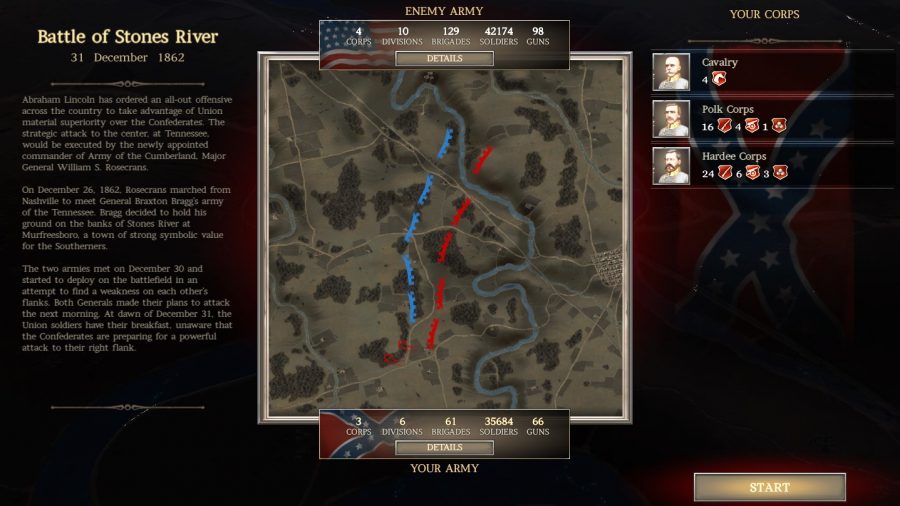 The really big change from Gettysburg to this game is the introduction of an army management system by way of a semi-historical campaign. Through a series of screens, the player is asked about what he (not many non-male commanders in the 1860s American military) did with his life from the time he graduated from West Point until the first shot was fired at FT Sumter. Did he become a tactician, logistician or strategist? What did he do in the Mexican War, lead infantry or target artillery? After the war, did he remain in the military or perhaps go into politics? Then the player chooses North or South and, based on the answers, the game records a command profile that will impact gameplay. Military rank decides how easy the enemy is to beat.

From there, the player proceeds through up to 50 battles, some actually historical and some purely notional, to test his mettle as a brigade, division, corps and then army commander. Depending on how well he does, Richmond or Washington will provide increased funding for his forces, from which he can recruit and train troops, equip them, promote or reassign subordinate officers and so on. And when we say equip we don’t simply mean requisition guns, we mean 12 lb Napoleon gun howitzers, 3-inch Rodman rifled artillery, Springfield infantry rifles or Sharps carbines for cavalry.

And ammunition, too: yes, the player will have to purchase ammunition for their forces as well because, in an exceptionally slick link between campaign management and battlefield management, they have to deploy supply wagons. These wagons move with the units supported or can move separately. So long as the units it supplies stay within a certain radius, they always have bullets and shot to sling downrange. Unless the supply wagon runs dry, something that is dependent on the amount of ammo the player commander actually purchased with the gold given home by his war department. 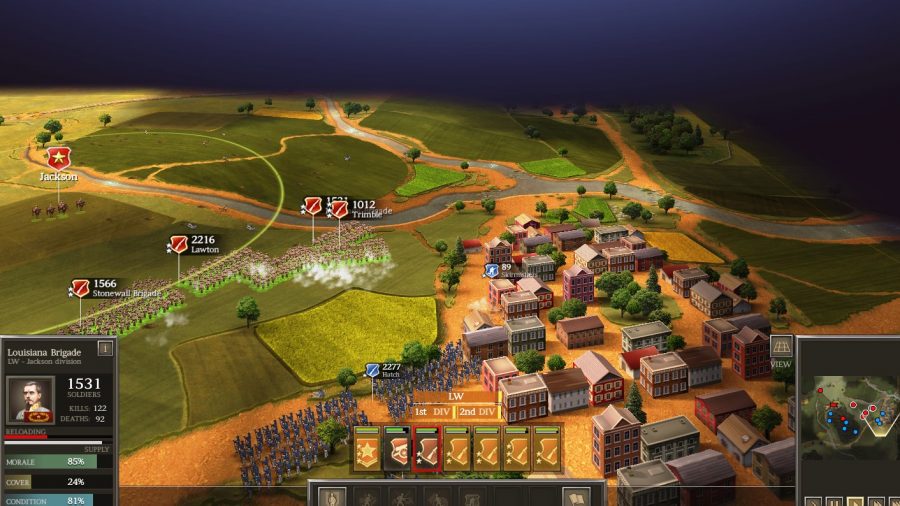 Counting the previously-noted campaign-generated battles,  a separate list of historical battles (to include Gettysburg from the first game) and a third source called Custom Battles, there is plenty to play. In this latter category are several of what seem to be portions of battles, which the player can either play as is, or modify to create their own scenario. For example, the historical offering for the battle of Fredericksburg begins as the Union army starts building pontoon bridges and crossing the Rappahannock River. The Custom Battle, however, starts as the Union army deploys to be shot silly assaulting Marye’s Heights.

A nation divided: These are the best American civil war games

I found the scenario on Spotsylvania’s Mule Shoe to be especially challenging, as it begins at dawn and it’s pretty dark until the sun comes up to lengthen visibility. In all battles, the units are correctly labeled as to regiments (23rd Pennsylvania, etc) and are rated for a number of factors, including the specific weapon used, with different specs for each. If your troops, historically, had muzzle-loading Enfields and the lads opposite had Spencer 1860 breech-loaders, trust me, the game knows it and you will too. 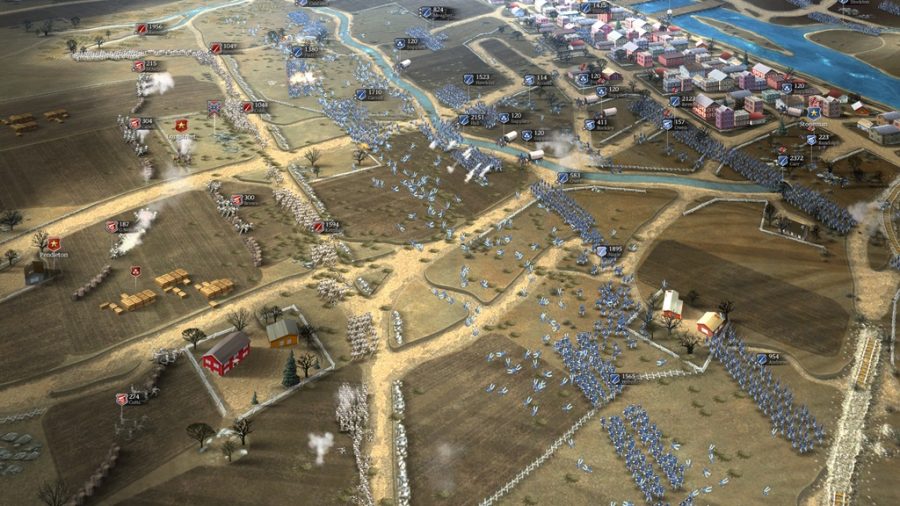 In either case the game is simple to learn and moves effortlessly. After an exceptionally well-managed pre-battle briefing, the player selects either an infantry (or cavalry) brigade or an artillery battalion and with the mouse draws where it should go and the path it has to take. Or the player can highlight a group of units, say McClaw’s Division at Gettysburg, and then click on a map point and off all the units go simultaneously.

Yes, you can click on a button and have a particular brigade Double Time, or Withdraw or Hold or whatever, but the real genius with the game is the friendly AI, which seems to deploy and maneuver units, change from line to column, unlimber and fire artillery in accordance with what it thinks is the player’s intent. I’d say nine times out of ten, the AI nails it and this has an interesting impact on gameplay. It lets the player function as an army commander, if that is their role in the game. It lets a corps commander be a corps commander, and not a corps/division/brigade/regiment/let’s-decide-whether-to-load-round-shot-or-canister battery commander. It provides one of the most historically focused games and, given the enemy AI seems to work likewise, this is a very good thing.

The new edition does have the ability to switch to a more flat semi-3D view of the map, and since everything is happening in real time, the obligatory jump map has buttons to pause or even speed up gameplay. The maps do not rotate, but are drop-dead gorgeous and look as if they have been painted on the screen. The game suggests the use of satellites and period maps, but if my guess is right, someone has a copy of the atlas to accompany the US Government’s Official Records of the War of the Rebellion. Although perhaps a bullet point too pristine, the maps are period attractive and damned accurate. 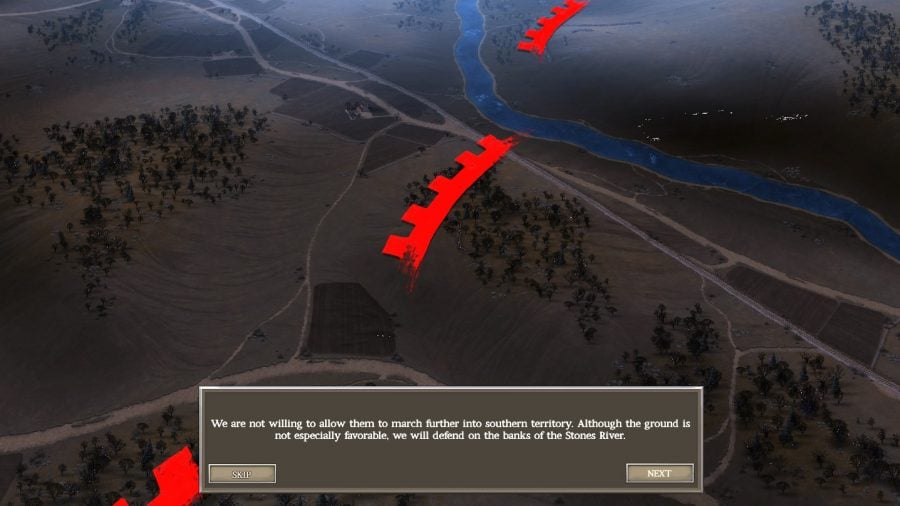 Animation is outstanding as well. You won’t get down to the cartridge-box level as the zoom function isn’t that robust. Instead you will see long lines of shoulder to shoulder ranks of infantry on the march, stragglers peeling off then catching up as difficult terrain hinders movement. During fire, these same soldiers will discharge their firelocks then begin to pull ramrods and reload.

Artillery is the same way, as cannoneers unlimber guns and move them into position, fire grapeshot as the guns recoil and have to be pushed back into firing positions, then ramrods swab barrels. When the guns do belch fire, the gunpowder smoke from both rifle and 12 pounder is almost a dead ringer for real life reenactments, so too for the sounds which are the same quality. In a nutshell, this game just looks and sounds like you are in a helicopter looking at the movie Gettysburg. Is this the perfect game? No, but it is perhaps close. 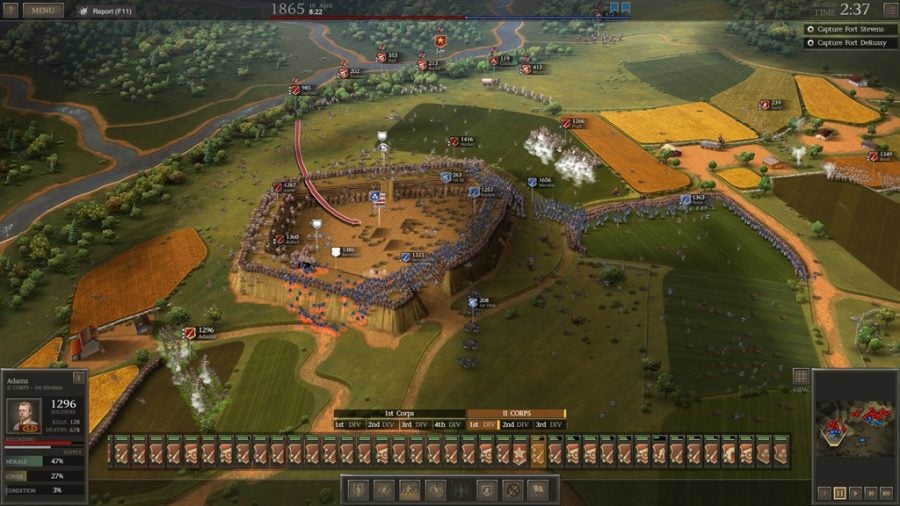 I only had a couple quibbles with this game, one that surprised me, another that did not. The latter concerned infantry charges, and these are basically Hollywood History in their representation. Opposing units collide and people swing rifle butts, bayonets stick and sabres slash.

Casualties are horrendous, particularly since such combat rarely happened. Yes, given a sunken road or some sort of field fortification, then hand-to-hand would occur, but on open ground, nope. Normally one side or the other would give way rather than face cold steel. Indeed, in the 18th Century, only 2% of battle wounds involved bayonets, and in the American Civil War that percentage was halved. As General Patton later noted, it was a weapon that scared many, but killed few. 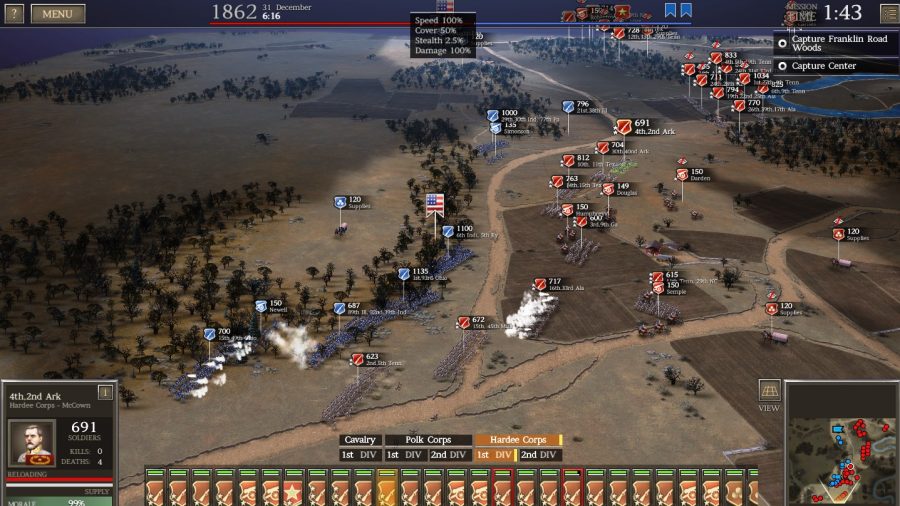 Finally, in the graphics department, I thought it a bit odd that the armies were presented in regulation uniform with no variation. There are no butternut and grey ragged Rebs, and the colorful Zouaves simply can’t be found for the Federals. The attractive powder blue overcoat worn by Billy Yank at Fredericksburg is missing, as is Colonel Berdan’s green clad sharpshooters.

There are also no flags, none, zip, nyet, nada, zilch. No Old Glory, no Stars and Bars and no square Battle Flags for the Rebs. True, all units are well labelled for easy identification (and Ultimate General: Gettysburg did use flags as labels), but the lack of fluttering flags really is noticeable given the particular care, accuracy and precision with the rest of the game.

Terrible, yes, but great: These are the best WW1 games available

I’ll conclude by saying this game has really light hardware requirements, pretty much one step above an abacus. Suffice it to say I’m running this on my wife’s Lenovo work station which has an Intel Quad 2.41 MHZ processor and an Intel onboard HD graphics card, 8 gigs RAM. It’s a far cry from my gaming rig in the basement (the one NASA contracts to move the International Space Station), but it runs without as much as sniffle.

Put it all together and you have a (more-or-less) historically accurate wargame that focuses the player on his job as an army or corps commander using a simple but elegant system that not only works seamlessly, but actually looks close to the real thing. Forget refusing the left regiment in your brigade. That’s not your job. Plan, support, launch, react and watch the fun as your troops do theirs. For $29.99 US, it’s shekels well spent.

And Creative Assembly/SEGA take note! This is the way a wargame is supposed to work.

If you’ve read this far and like what you see, why not buy Ultimate General: Civil War and take it for a spin yourself.