Wargame developers love making American Civil War games, drawing on the war’s romantic notions of ‘brother against brother’ and the development of warfare from line battles to quasi-trench warfare slug-fests. Alongside the two World Wars,  Napoleon’s conquests and the grand imperial conflicts of antiquity, it ranks among the ‘most gamed’ wars in all of human history. It probably also helps that a lot of modern wargame designers are American.

Unsurprisingly, for a war largely fought over whether white people should be allowed to own black people, American Civil War games have at times been a magnet for controversy. Nevertheless, the conflict’s key advances in warfare technology and its epochal importance in US history have made it an endlessly compelling and popular setting for wargames of every format throughout the 20th century, spawning a whole genre of games, many of which are worth your time.

There have been plenty to choose from over the years, in different scales and contexts, focusing on various key battles and engagements – so, to make your choice easier, here’s our list of Wargamer’s favourite American Civil War digital strategy games. 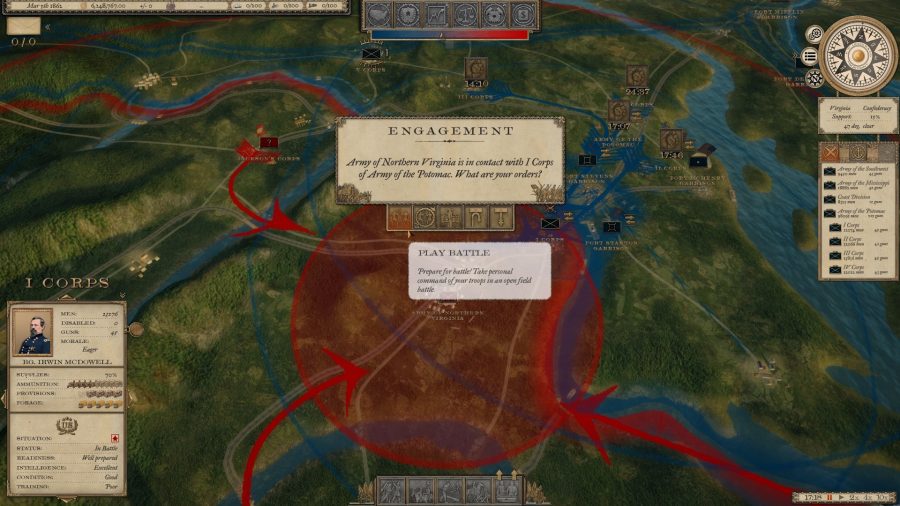 We’re putting Oliver Keppelmüller’s Grand Tactician: The Civil War front and centre because at the moment we feel it’s going to become one of the most important ACW releases in recent times, although other recent games like Victory and Glory below were also pretty solid. Grand Tactician is proving to be quite ambitious in what it wants to do, and of Mr. Keppelmuller manages to pull it off then this game will easily take the crown.

Each in turn: These are the best turn based games on PC

As things stand though, there’s some big caveats you should be aware of. It’s in Early Access, for starters, which essentially means this is a beta – warts and all. Our own Bill Gray was blown away by his time with the game and even Bill – who’s always tended to focus on positives over negatives – does mention problems, ranging from dodgy AI behaviour to off casualty figures.

Read around and you’ll see other people struggling with other rough edges this game still has. With any luck these will all be ironed out over time, but know that even though this game sits at the top of our ACW list, it’s not yet in the state it needs to be in to earn that spot. 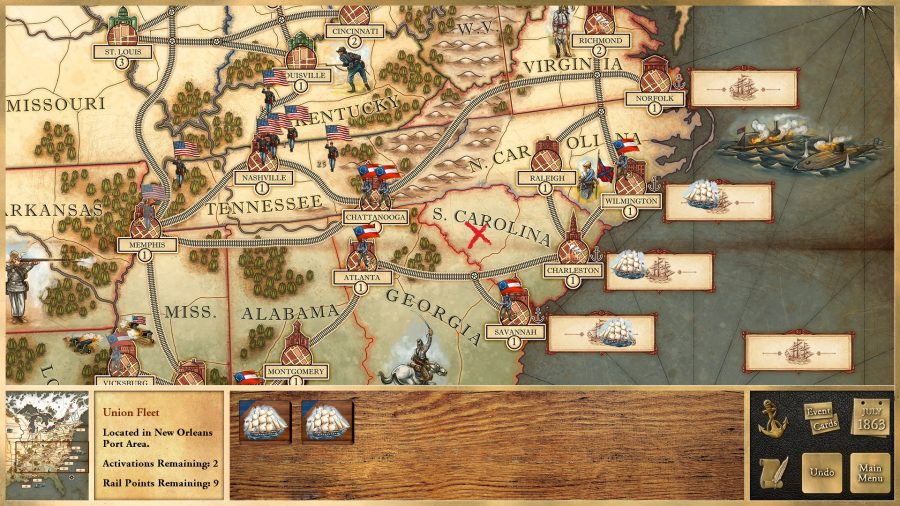 One of Lock ‘n Load’s three digital releases in 2020, Victory and Glory: The American Civil War is an excellent board-game style experience featuring an area-control style strategy layer, card mechanics and a tactical battle interface. You can play out the entire conflict as either the Union or the Confederacy in a campaign that’s highly replayable.

Vive l’Empereur! Here’s our guide to the best Napoleonic games

Naval warfare is highly abstracted, but the land war is well represented. Apart from some documentation issues around concepts like supply and some bugs, this is actually a pretty decent ACW strategy game and an excellent showing from Lock’n Load. 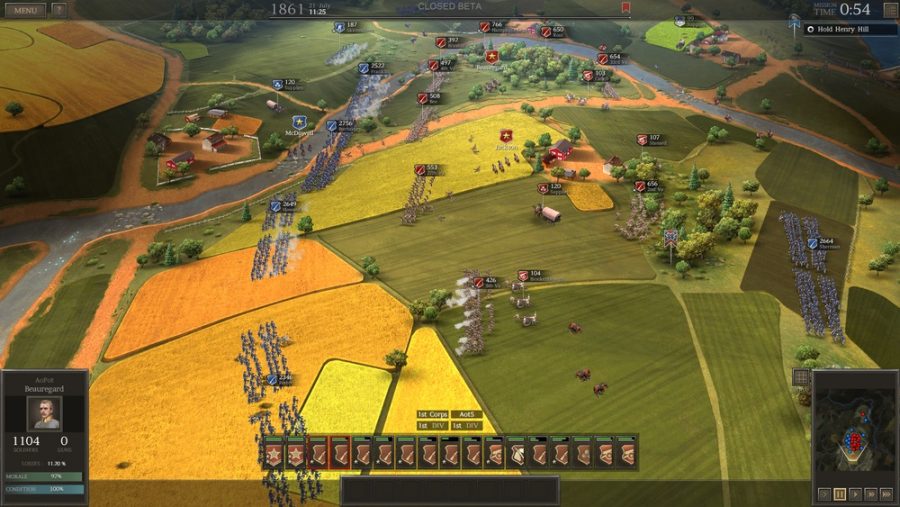 Ultimate General: Civil War is a wonderful follow-up to Game-Labs LLC’s already wonderful Ultimate General: Gettysburg. Civil War puts the player in command of either Confederate or Union armies throughout the entirety of the war, allowing the player to build their army composition, from unit size to weaponry of individual units. The title brings Total War-style tactics (the lead on this game did make several mods for Total War games) to the well-known battlefields of Antietam and Gettysburg, as well as battles with less coverage in games, such as Gaines’ Mill and Chickamauga.

Low cost conflict: These are the best free war games

The ability to follow individual brigades and their officers throughout the war is one I learned to miss after playing this game. Seeing a unit you created during the first year of the war get utterly dissolved by enemy canister rounds is heartbreaking, but following an officer’s career path from lowly Captain to Major General brings pride I rarely get from playing games. It’s easy to connect with your army on a personal level, as you can name each unit in addition to being able to manage their training and outfitting. 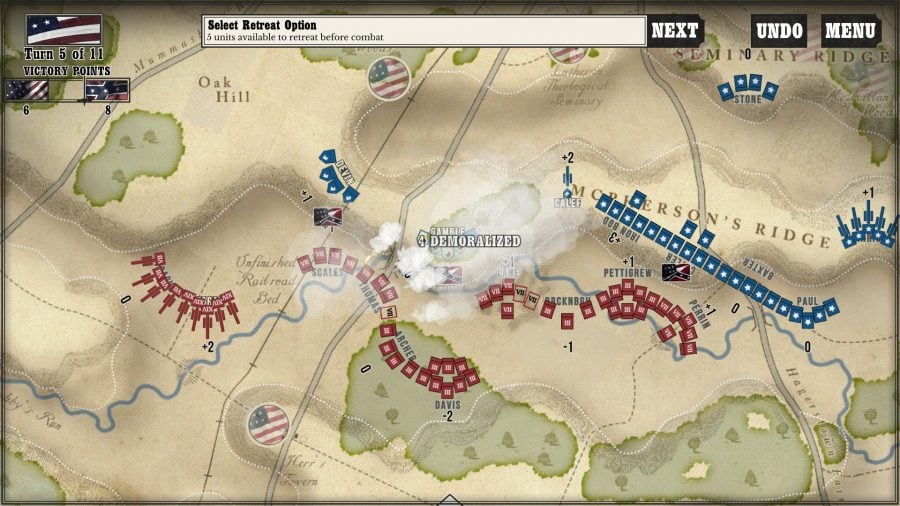 Speaking of Gettysburg, it’s impossible to list off the best American Civil War games without mentioning a game about Gettysburg at least once. Gettysburg marked the high-water mark of the Confederacy during the war, and developer Shenandoah’s The Tide Turns is a beautiful display of… well, how the tide turned. The map is wonderful, drawing inspiration from old Engineer Corps maps, with unit markers distinctly popping out against the backdrop.

Time and tide wait for no man: These are the best naval games

What makes The Tide Turns such an interesting game is the turn system. Units have their turn order decided by the random drawing of “lots” from the total amount of units on the field. This leads to an uncertainty of combat that is not present in IGOUGO or WEGO type games, but is certainly more representative of the chaos of Gettysburg. 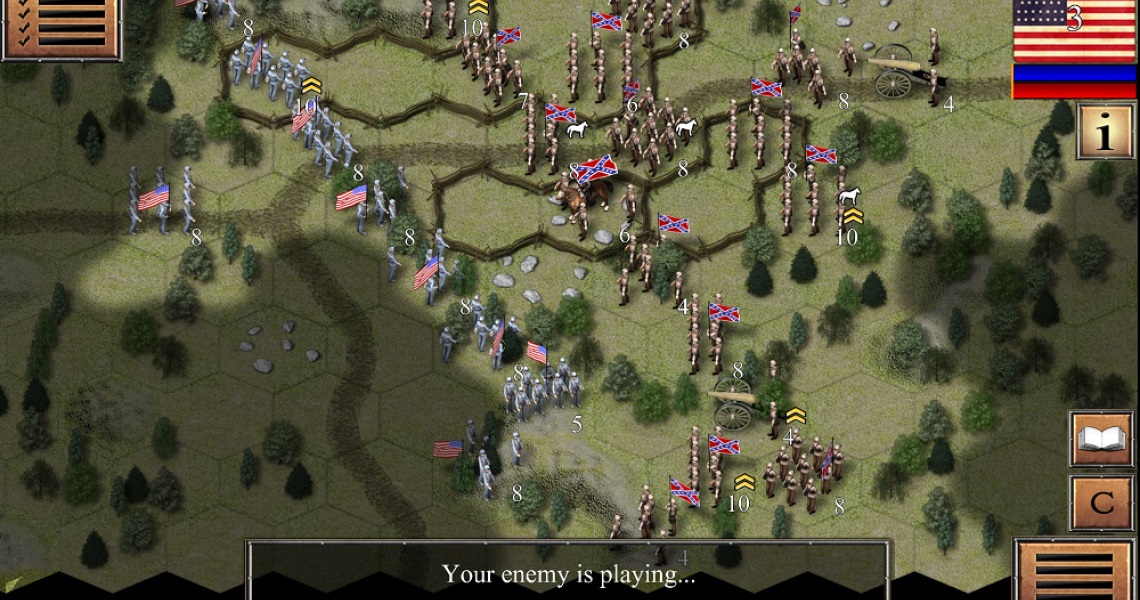 HexWar’s charming Civil War: 186x series made the jump to PC from Android and iOS, bringing what our reviewer Jeff Renaud called a “quick hit” wargame. It’s easy to jump into a scenario pulled from the many different battles of 1863 (or any of the other years of the war, there are companion games featuring all of them!), with combat frequently beginning on the first turn.

A single scenario can take less than an hour, but the brevity of the games can’t be mistaken for easiness. The AI can be downright painful to play against on the higher difficulties, which is a refreshing change of pace from other “quick hit” wargames. 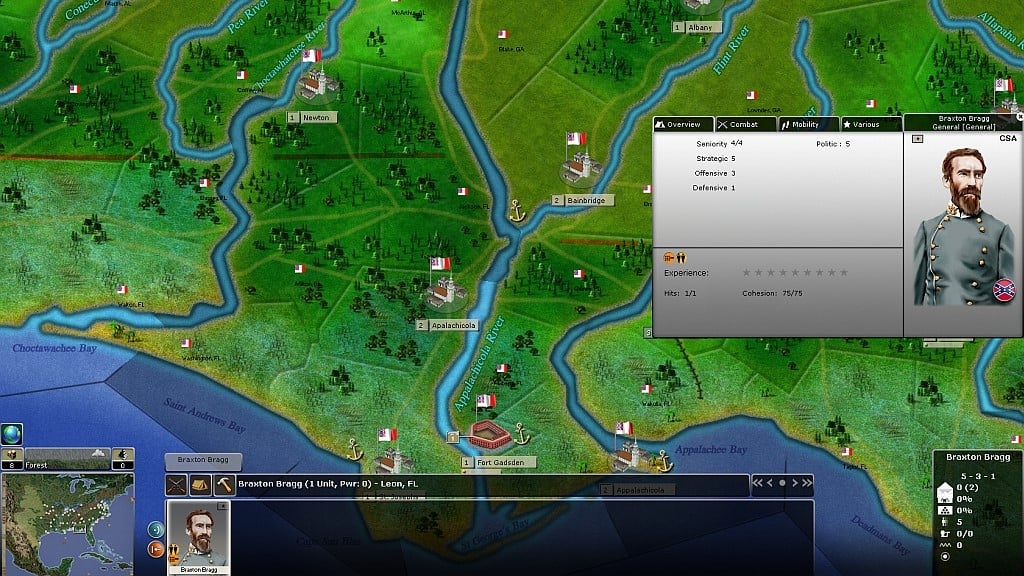 AGEOD’s Civil War II (note: not about an upcoming second civil war) pulls back from the close, action-oriented look of many other American Civil War titles. The player is instead put into the boots of president / commander-in-chief of the operational aspects of the war. The WEGO style of play makes running into the enemy challenging and frequently surprising, forcing you to plan well in advance for future offensives.

The world at war: These are the best WW1 games you can play now

The chain-of-command in armies can be customized by the player, allowing obsessive micromanagers to truly fine-tune their army. Decisions don’t stop with merely military matters; determining how much money should be printed or placing embargos also fall into the rhythm of gameplay. Wargamers with a taste for grand strategy could comfortably find themselves at home with Civil War II. 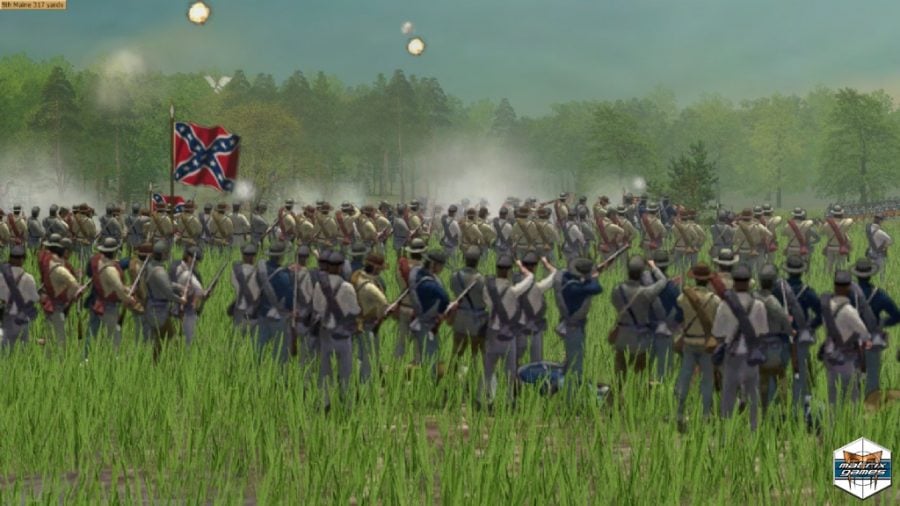 The Scourge of War series, from NorbSoftDev, features some of the most realistic depictions of generalship of the 19th century, and Chancellorsville is no exception. The player can take command of different units within either the Union or Confederate forces; from commanding a lone Brigade to commanding the entire army.

Orders given and received are a nice touch, as virtual couriers will arrive with and send out letters you can pen yourself. Units can be directed to form into specific formations and have several different movement options, including instructions to travel via road and to form into a certain formation type upon arrival. These options are necessary to success, as the AI may have read ahead in the history book, and will prove to be a fierce opponent.

The battle of Chancellorsville was an important prelude to Gettysburg, but is not as frequently covered as the latter. However, if you are looking to get your fix of Chamberlains and Picketts, you may also be interested in Scourge of War: Gettysburg. 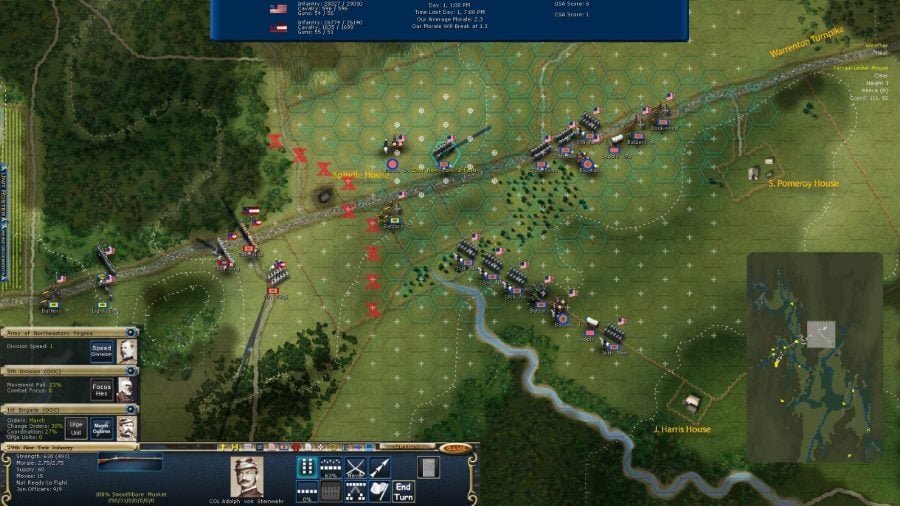 Western Civilization Software’s Brother against Brother has a great nostalgic feel to it. The sprites and the maps are reminiscent of wargames a generation or two ago, but the game packs several unique features that make it worth mentioning. The first is the inclusion of Wilson’s Creek, a battle in the Western Theatre of the war. Any battle not on the east coast is normally glossed over, so kudos to Western Civilization Software for broadening our collective horizons.

Let’s get physical: Here’s our guide to the best war board games

The title also packs an “active ability” feature that generals can use on their units to encourage them to fight harder, à la the more recent Total War offerings. This coupled with a novel movement system, where units can sometimes refuse to move in a representation of orders being jumbled and lost, brings a refreshing yet familiar take on some less covered battles of the war. 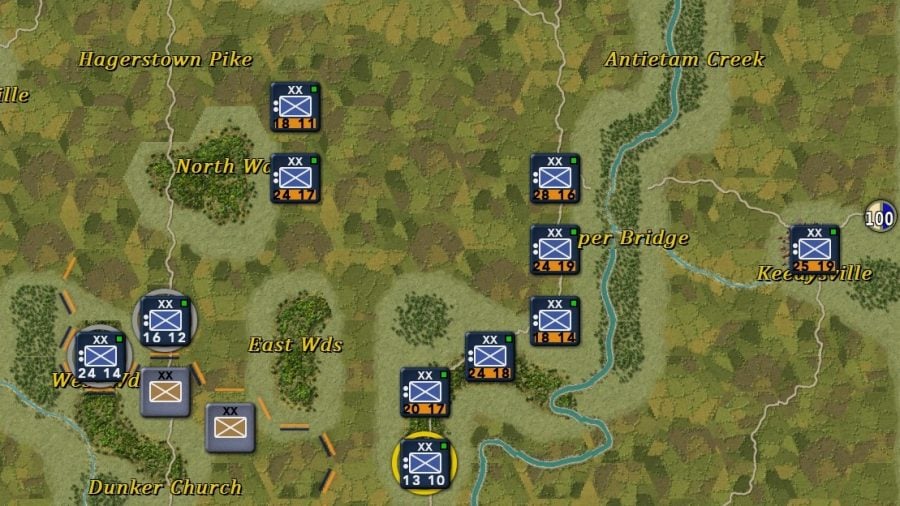 The Operational Art of War 4

Before you all storm to the comments to yell at us for Talonsoft’s The Operational Art of War 4 (TOAW4) not being an American Civil War game, we know the whole game is not about the American Civil War. However, there are several great scenarios to choose from that take place during the war, using TOAW4’s excellent systems to simulate battles such as Antietam, as well as whole campaigning seasons, particularly highlighting the Chancellorsville/ Gettysburg campaign.

Should you not be in the mood for the several scenarios TOAW4 has to offer, there are community scenarios available for download, as well as a scenario editor, so you can finally simulate a brawl at Appomattox Court House. Read our TOAW4 review for an idea of how the game as whole plays.

Here are a few other American Civil War games worth keeping an eye on:

Campfire Games’ War of Rights is an Early Access FPS that looks quite impressive so far. 150 players can duke it out on the battlefield, which so far includes Antietam and Harper’s Ferry. The gameplay looks and feels solid, like a cross of Mount & Blade and Holdfast’s combat style, while bringing a more realistic visual fidelity to the fight.

A chain-of-command system is currently under development, so far with higher ranking officers passing down orders to their subordinates, who can in turn order their men to follow their lead. The game is primarily multiplayer, so the experience does depend on other players, but players do tend to actually work together. War of Rights has a development roadmap laid out, and it looks to have a promising future ahead.

John Tiller Software did a series called Civil War Battles, which cover specific battles and campaigns during the American Civil War. They’re old-school hex-and-counter affairs, but they’re currently being remastered by Wargame Design Studio with new graphics and engines updates. We’re looking into these now and as we evaluate them, we’ll add them to the main list. We’ve put this here though so that you’re aware they also exist, and are considered pretty good ACW war games for what they are.

As was pointed out in the comments, we’d also be remiss not to mention Sid Meier’s Gettysburg! & Antietam! games from the late 90’s. Gettysburg! especially was considered one of the best strategy/war games of the time, and is a bench mark for many ACW and Gettysburg-themed games that have come out in the decades since.

These games are fairly old now and there’s no official support for them although you can find a digital copy via Abandonware websites. If you’re interested in exploring one of the gold standards of digital ACW wargames, you’ll want to check it out.