The centenary (100-year anniversary) of the end of World War One has now passed. While the subject has seen renewed interest these past few years generally, there haven’t been many decent new computer wargame releases, so this list remains  – much like the titular conflict’s trench warfare – fairly static. Which is a shame, considering just how much interesting Great War-themed material set is coming out of the board war games world these days.

Still, these are all great games if you haven’t tried them yourself yet, and we’ve divided them into a couple different types: strategic and tactical. There’s not as many tactical games as there are strategic, and we’ve thrown in a flight sim as well for good measure. There is, as they say, something for everyone.

Looking for some visceral, boots-on-the-duckboards trench warfare action? Perhaps you prefer pushing little pewter battalions around a tabletop battlefield in a commandeered French mansion hundreds of miles from the fighting? No, we’ve guessed it – you fancy soaring above the Great War in a flying machine made entirely of paper clips, canvas and adventurous spirit! Well, whichever – we’ve got you covered.

So, without further ado, here is our list of the best WW1 strategic & tactical wargames.

What are the best WW1 games? 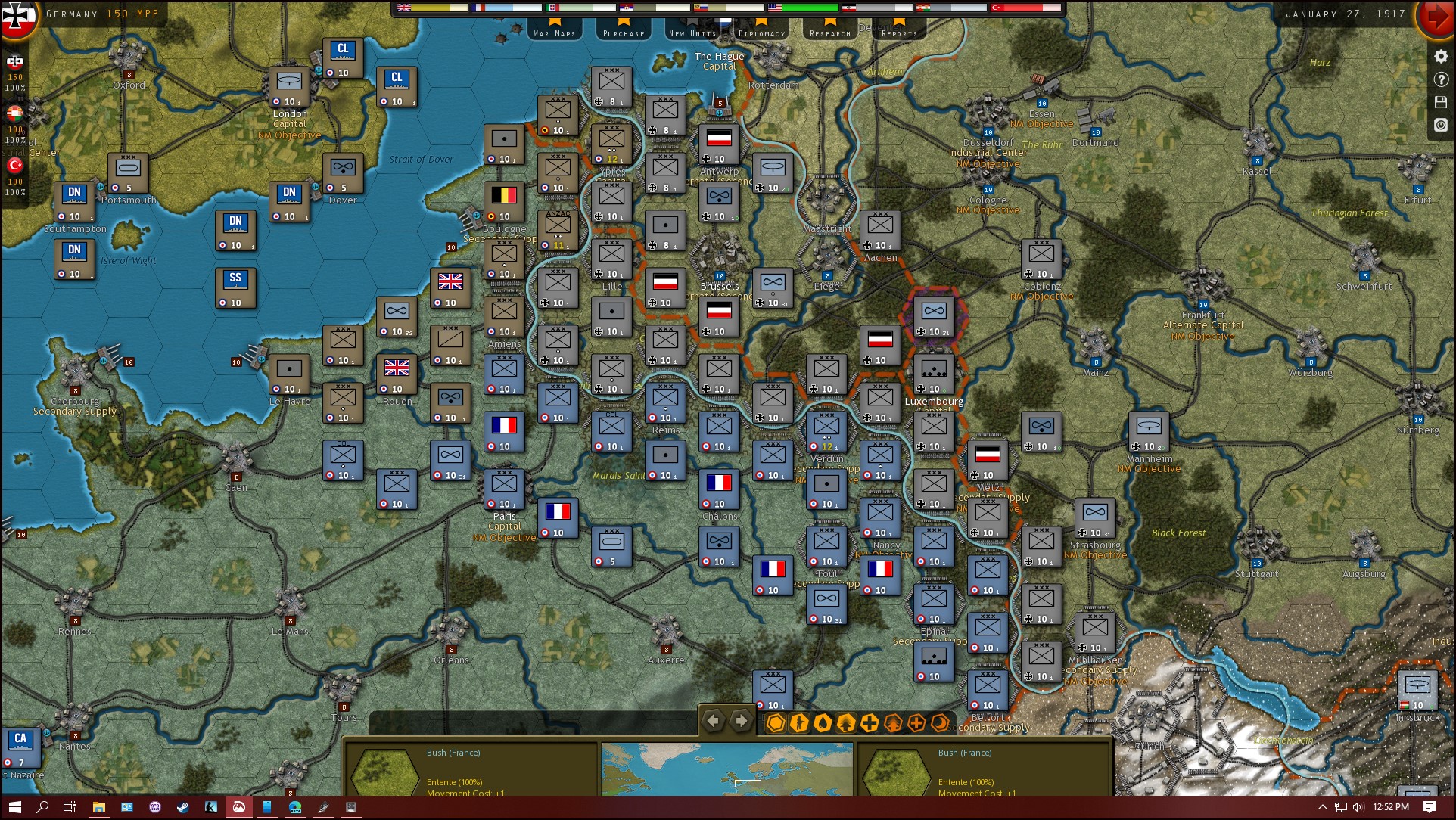 Fury Software are masters of their craft, and it’s fitting that after they’d finished making the ultimate WW2 grand strategy war game, they’d move on to (re)make the ultimate WW1 game. Taking all of the experience and refinement they’ve learned over the past few years, the team decided to have another stab at the Great War by remaking one of their earlier titles that covered the same period.

Update graphics, a new engine and mechanics all serve to make this a pretty special WW1 strategy game. So much so that Bill declared SCWW1 to be his new ‘go to’ WW1 war game, replacing the much celebrated Guns of August. If that’s not endorsement enough, I don’t know what is.

You may also want to check out a previous entry on this list and SCWW1’s predecessor, Strategic Command Classic: WW1. It’s a much older game and hasn’t benefited from the refinements later Fury Software games have enjoyed, but it’s still pretty good. 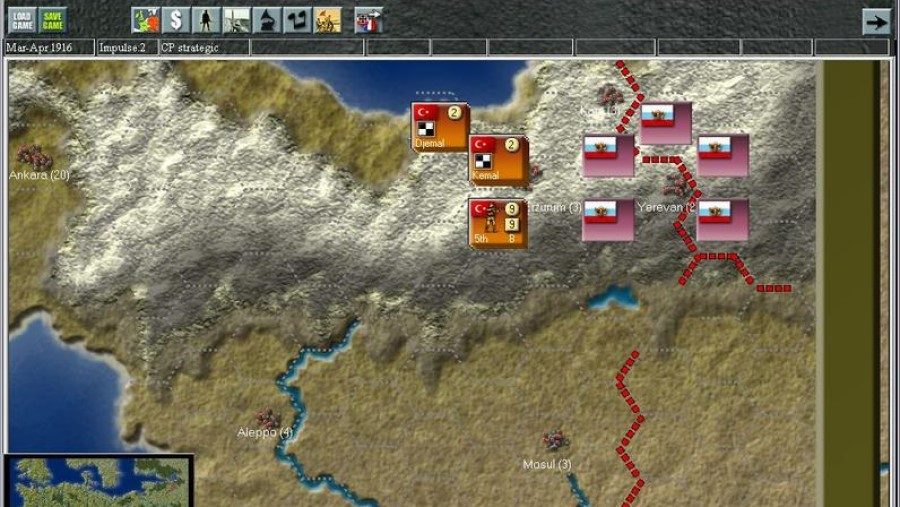 The older graphics and mechanics are clunky but capture the crucial problem of the combatants: a war in which the resources and military thinking of the coalitions were outstripped by industrial warfare. In the four scenarios marking each year of the war, players must choose which HQs to activate given a limited number of activations.

Back for seconds? Here’s our list of the best WW2 games

Points are used to research tanks, gas, trenches and to influence or declare war on neutrals. Ships are assigned orders and areas while subs starve Britain. Air units are assigned to fronts. Play uses two-month turns composed of impulses resolved simultaneously. The map covers Europe, the Middle East and some of North Africa. Each nation of a coalition is handled separately. National morale and exhaustion determine victory. The game replicates the attrition aspect of World War I quite well. 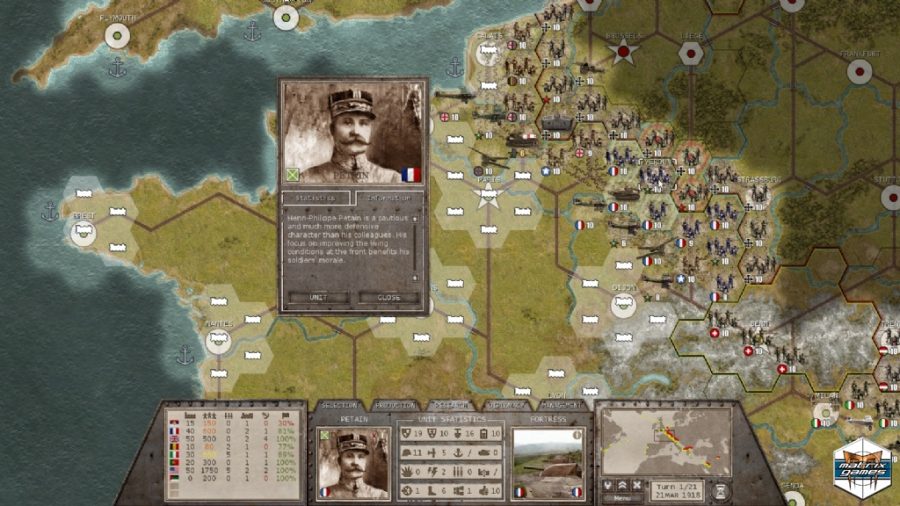 Slitherine’s 2012 game shows how the Commander engine could handle World War I. The terrain and unit graphics combine simplicity with enough detail to make them interesting as well as informative. Mechanics are simple with tabs bringing up panels for research, diplomacy, production, and selection to show unit stats. A management panel shows countries’ overall status. Submarines are always submerged and can be attacked only when the enemy stumbles into their hex.

Air, artillery and infantry capabilities grow through research. Commanders are attached directly to units instead of separate HQ units. A unique swapping function allows units to easily exchange places. The five campaigns cover each year of the war. Research focus on broad topics instead of individual concepts while a simple supply system makes this game accessible to new gamers and still captures the essence of the topic. Also available on iOS. 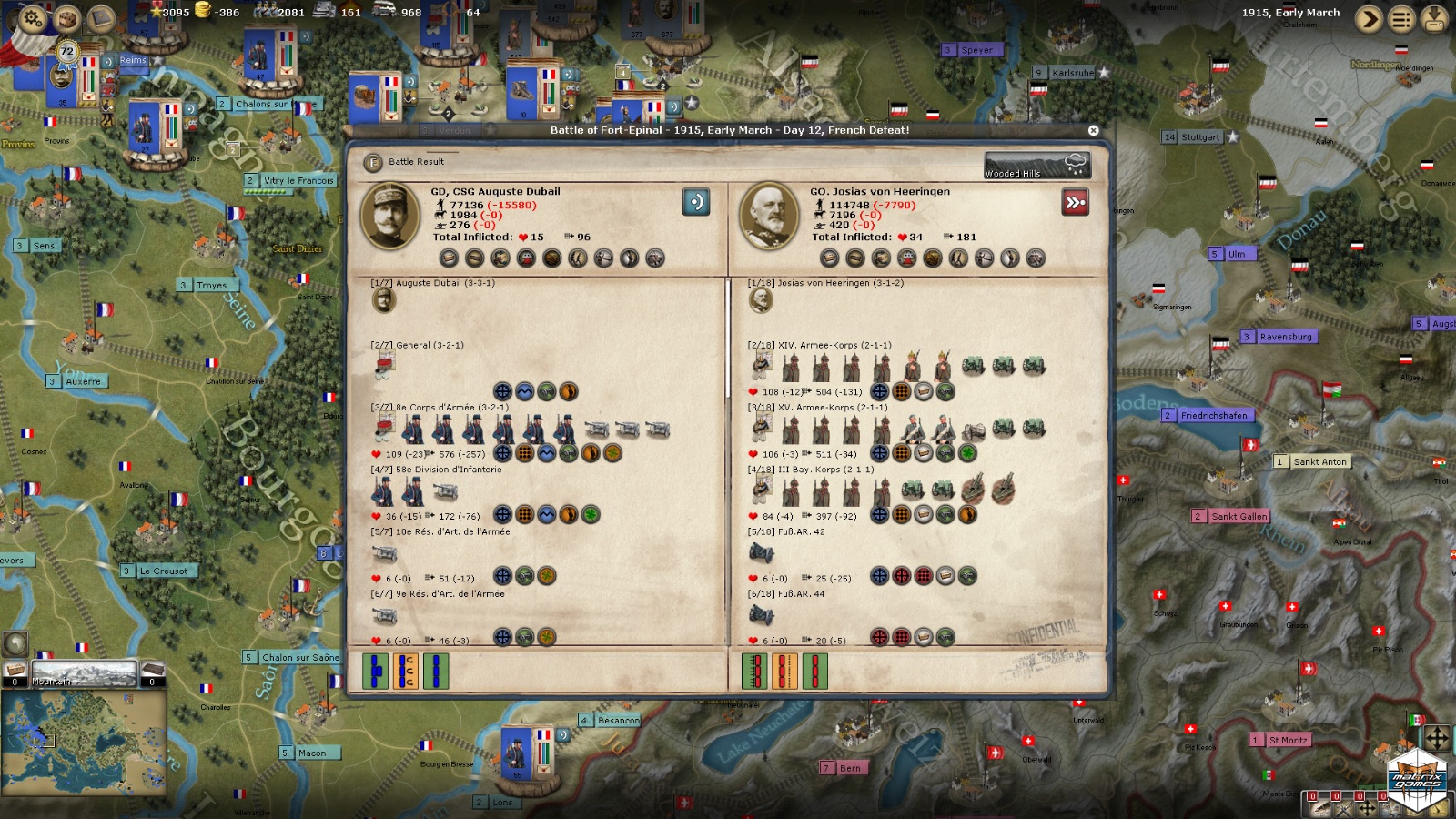 TO END ALL WARS

Using a better engine this game features two-week turns, while the main map covers Europe with off-map boxes for the rest of the world. Units begin as single armies but can be broken down by increments to regimental level. Leaders can be attached, promoted and demoted under certain circumstances. Lists and map filters lay out the many factors of play. Movement is the AGEOD click-and-drag engine with a battle mode for selecting tactics. Weather affects movement and supply.

Get around the table: These are the best WW1 board games

Success on the field and triggered events yield diplomatic points and decreases or increases national morale. Players can use regional decisions to accomplish operational goals where diplomacy is a matter of alignment. Submarine warfare is more abstract than in other games. An expansion module called Breaking the Deadlock is available. 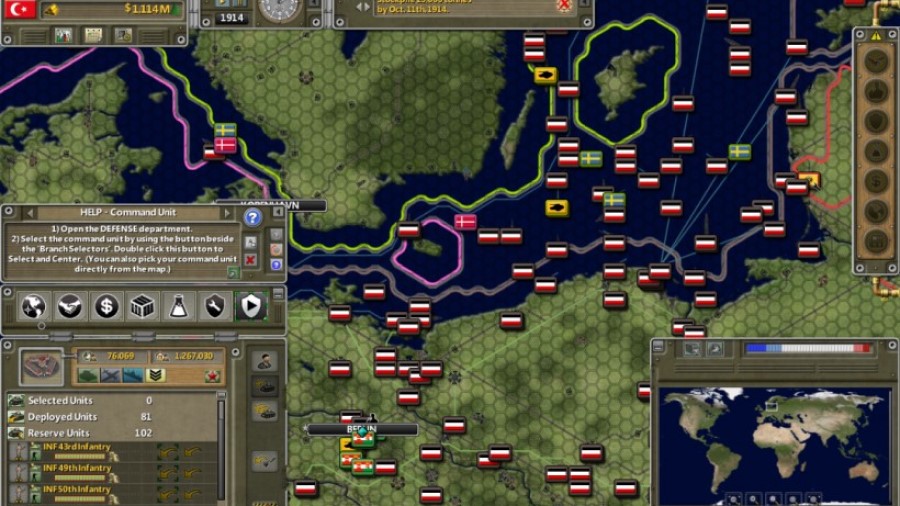 This software is concerned more with logistics and resource management as opposed to putting rounds down range, but there are several areas which make play unique. There is a full-fledged weather system, while movement is a simple process of drawing a line from start to destination, then allowing the AI to figure out the best way to get there. And believe it or not, all of this is done in semi-real time. The detail in the game is fantastic and doesn’t simply allow of things like heavy artillery. No, the player must choose the type of gun – 130 mm vs 152 mm for example – for his rubles based on what was historically available.

But the BIG draw of the game is the scope. While most games define World War I as East Front, West Front, Italian Front and Lawrence of Arabia, this game takes the term “World” literal. The game covers the entire globe, so if Japan invades China, you move to that real estate and fight/produce it out. And you don’t stop in 1918 but can continue the game on well into the 21st Century. Fun fact: Battlegoat is now taking their ‘Supreme Ruler’ series into Space with Galactic Ruler. 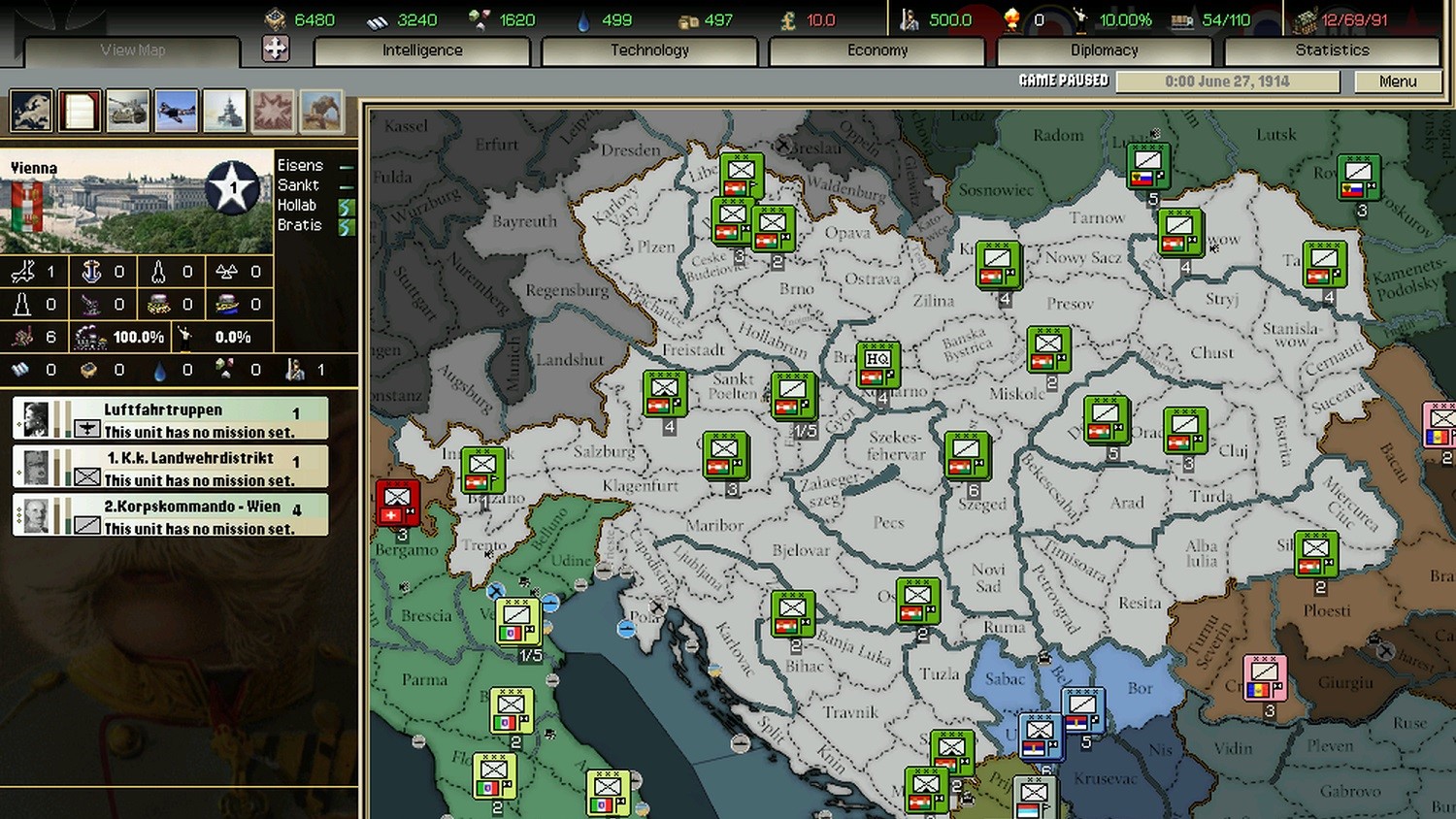 The Hearts of Iron series needs little introduction as one of the most famous strategic World War II games ever. Darkest Hour is actually a variant of HOI Armageddon created by a group of dedicated modders in love with the series. It is a stand-alone game with two scenarios, one beginning in 1936, but the other in 1914 covering WWI.

Put your heart into it: Read our Hearts of Iron 4 tutorial

It’s a typical strategic logistics and production fare, but using the HOI engine and overall design as the selling point. Often called the best of all HoI add-ons, the game has outrageously high reviews on Steam. Trust me, if you like Hearts of Iron, you will like this.

The next level of ‘zoom’, these titles focus on one or more specific operations within the broader sweep of World War One – allowing you to re-fight the pivotal offensives of the most famous commanders. 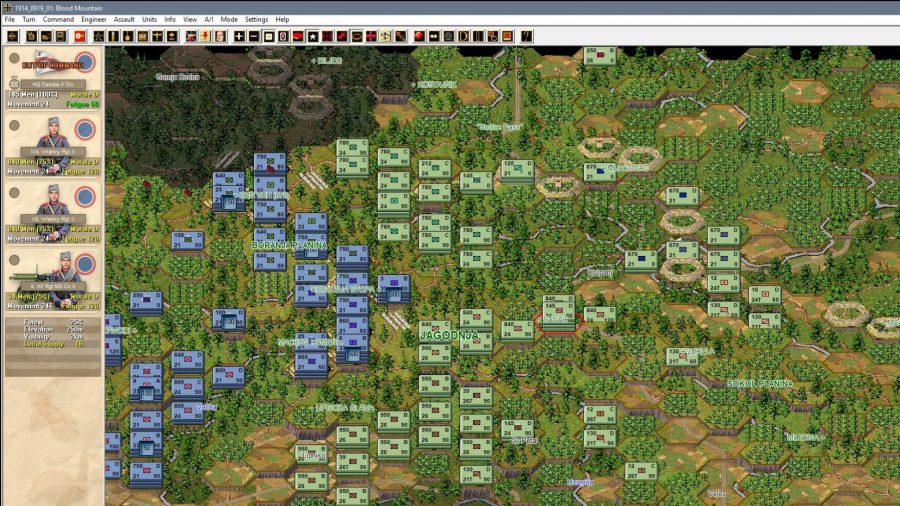 It’s nice to see JTS still making games for their ‘First World War Campaigns’ series – France ’14 & Prussia ’14 below is pretty much all we had for a while, but the latest entry in the series offers an excellent look at this often overlooked part of WW1’s history. 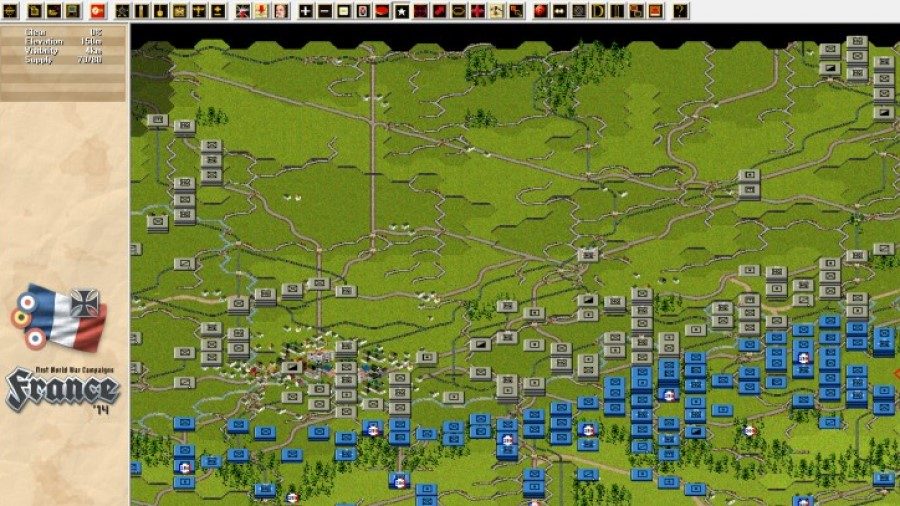 Scale is 1 km per hex, two hours per turn with battalion sized units. Tiller’s 2010 offering, France ’14, is only one of two legitimate World War I operational level games. The 3D icons are too small for easy use but the 2D counters and the meticulously detailed terrain provide a satisfying experience enhanced by the colorful uniforms in the info boxes. Weapons include early reconnaissance aircraft, German siege guns, and French 75s. Fortifications like Liege show the difficulty in taking chains of strong points.

Vive la France! Check out our guide to the best Napoleonic games

Lessons from fighting the first five weeks of conflict all revolve around time. Going from travel to combat mode takes time even for the ubiquitous cavalry units. The fast movement required by the plans of both sides means more and more HQs go out of the chain of command as campaigns continue. Movement to contact requires the use of roads creating traffic jams. All these factors combine to show why the maneuver was so slow. The game’s companion package, East Prussia ’14, is similar but more fluid with greater movement. Both games can be linked into a single campaign.

This is as zoomed-in as strategy gets: at the tactical level you’ll control individual squads of soldiers to complete their objectives in the many and varied battlefields of WW1. Make sure you pack your bayonet. 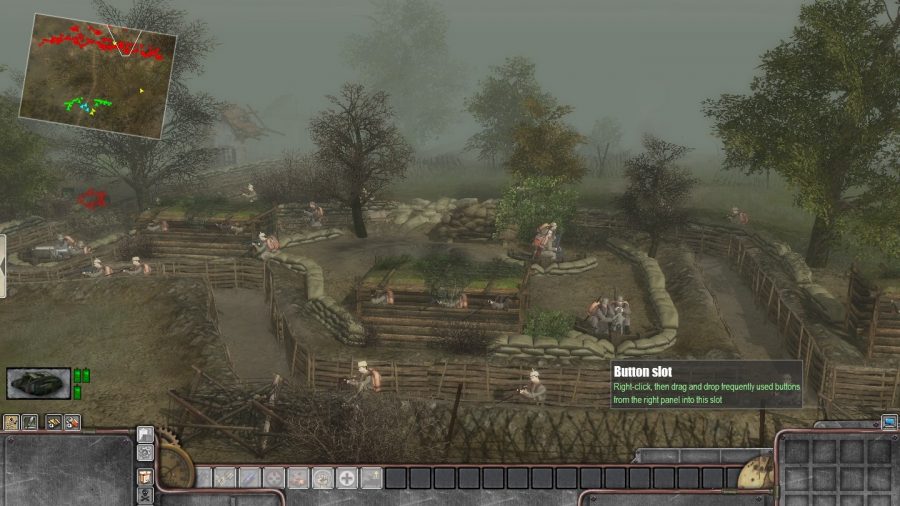 This is a bit of cautionary recommendation, only because the technical health of the game can fail to meet expectations. Still, we’re great fans of the Men of War series, and this is essentially a spin-off WW1 game based on the same engine. It’s surprisingly authentic in how it recreates the soldiers, weapons and equipment of the era, and the developers have adapted the mechanics well to suit how warfare worked for the period.

Bill was especially impressed in his review, and the single player offers a fairly robust series of unlinked scenarios, with many factions covered now via DLCs and add-ons. Multiplayer has always been the core of the Men of War experience, and there’s still a community there to engage with should you feel so inclined, but you can also do the narrative missions in co-op if you want. 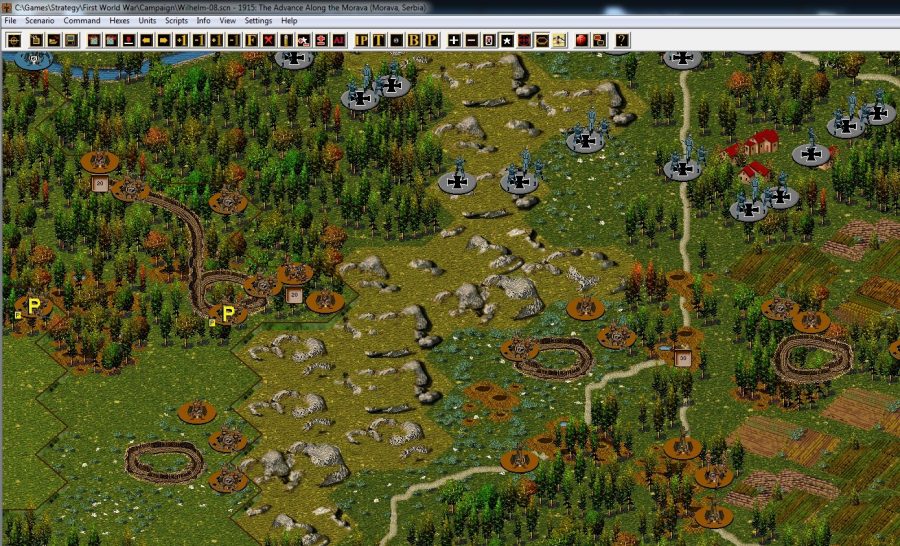 John Tiller Software addresses turn-based small unit tactics in this 2014 offering in a game where units are leaders, squads and companies, and where hexes are 40 meters across with each turn covering five minutes of time. The 2D graphics show the troops’ heads while 3D figures stand on bases. Terrain ranges from the shell hole Hell of the Western front to the beaches of Gallipoli.

Run away to sea: These are the best naval games around

The 67 scenarios include two linked campaigns covering the entire war so that Turkish, ANZAC and Canadian troops get their due. The full panoply of weapons shown include trench knives to grenades to poison gas and tanks. Seven separate campaigns follow field officers including Major Charles W. Whittlesey of “Lost Battalion” fame.

We promised you a simulation of the terrifying balsa wood flying machines that plied aerial warfare in the 14-18 war, and here it is. Time to join the twenty-minuters… 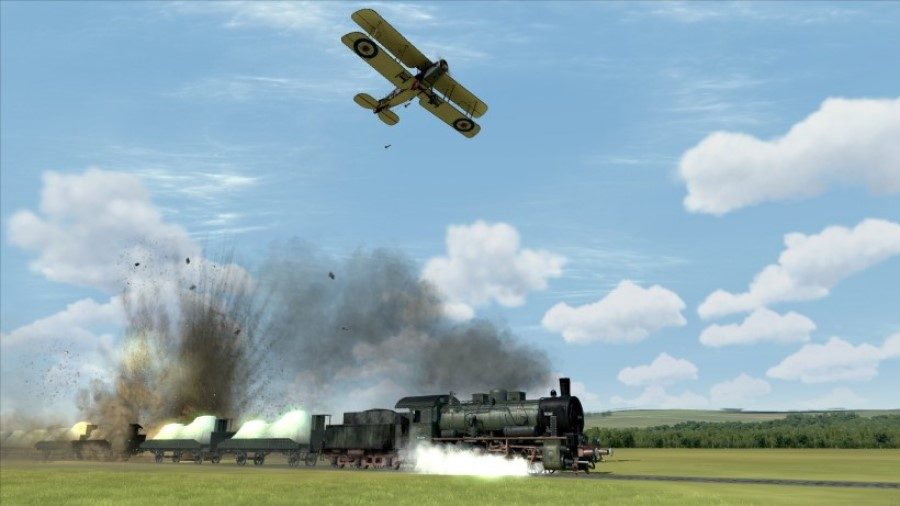 Gorgeous graphics support likely the most realistic game on this list. While you can reduce the complexity, full throttle this game is an air force grade simulator that would make Manfred von Richthofen’s jaw drop. Cockpits are meticulously rendered and require you to fly the plan as did the lads in 1916. Some aircraft did not have a throttle but required the pilot to change the fuel mixture level, and this game does likewise. Your Pfalz D.XII stall?

Well you’ll need to turn the engine off to recover, because that’s really the way it was. Also unique is the game’s business model. You can download the software along with three planes and play for free, forever. But getting additional planes and upgrades costs extra. Being a Russian software company, you also get access to a lot of planes you likely have never heard of, such as the Gawd awful huge Sikorsky S-11 Muromets bomber (which will cost you $20.00 US, by the way).

After WW1, there came WW2 – our sister website PCGamesN has created a list of excellent WW2 Games, and we have our own list of WW2 Strategy Games if you want some contrasting options as well.