I’ll admit I didn’t give Undaunted: Normandy a second glance when it first popped up on my radar. The artwork had a distinctive ‘cartoon’ aesthetic that I wasn’t initially on board with, and the idea of an abstracted, deck-building take on WWII squad combat seemed to be an odd pairing. I’m not a fan of the deck builder grand patriarch Dominion so I tend to avoid those games.

But after being exposed to several amazing deck-builders over the last year and hearing the constant praise wargamers and board gamers alike lavish on Undaunted’s unique mechanics and simplicity, I thought I should reconsider and check it out. I’m delighted to say I was 100% incorrect in my initial passing assessment.

Undaunted: Normandy is an exceptional take on the deck building genre, and an elegant and easy-to-understand tactical combat game, wrapped up in a beautiful package that has quickly become one of my go-to games for WWII squad engagements, especially when playing with more casual players. For those unaware of what a ‘deck-building’ game entails, allow me to explain.

Both players begin with a similar or equal deck of cards, usually quite small. Over the course of the game, players will both play their cards into a discard pile and add new cards to that discard pile from a face up selection of cards that form a ‘supply’. 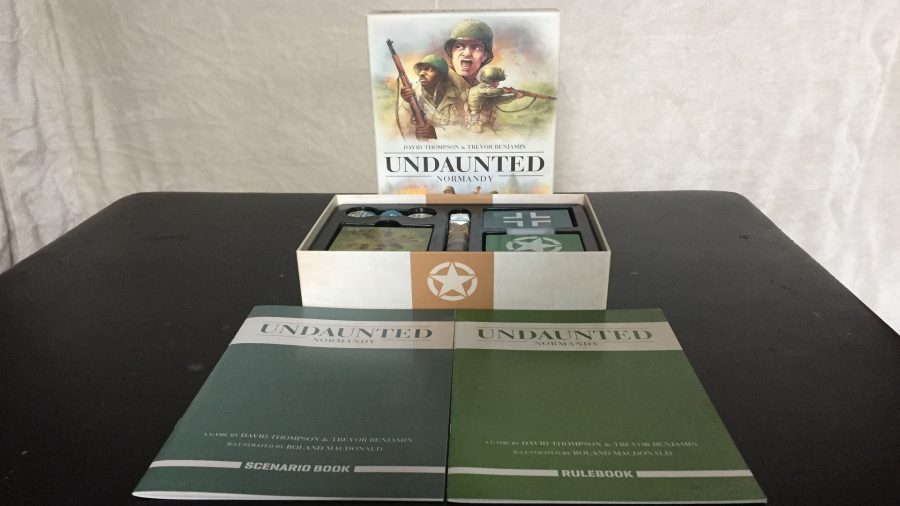 When a player’s deck is empty, the discard pile is shuffled and flipped over, creating a new deck. Players are therefore constantly altering the composition of their decks and managing this is a central tenant to Deck Builders. While many games use this mechanic as the primary function (see Star Realms for one of my favourites) Undaunted: Normandy uses this to excellently abstract the command and control issues facing platoon leaders on the ground. In Undaunted, players command an American Army Rifle Platoon or a mirror image Wehrmacht Rifle Platoon (abstracted to represent the myriad composition of German Forces in ‘44, and more importantly, for gameplay’s sake).

Over 12 scenarios, playable individually or as a complete campaign, players will follow in the footsteps of the US Army’s 30th Infantry Division (The designer’s grandfather’s unit, as noted in the Campaign book) from the beginning of their struggle in Normandy until the crucial Battle for Mortain that ended August 12th. The campaign adds a bit of tension and replayability to running through each scenario, but I’m happy to say the final scenario acts as a standard ‘competitive’ layout with access to all cards and a virtually identical beginning for the two sides. You can imagine Undaunted: Normandy tournaments where players sit down to that last scenario over and over again.

Allow me to lay out the beautiful simplicity of Undaunted’s overall structure. A modular, easy to read map is set up per the scenario instructions. Each tile has a cover bonus written on it and not much else. Each player’s starting deck and their supply, from which they buy new cards, is then set out. Objective tokens and the in-play unit tokens are laid out on the map. Then off you go! Set up took us less than five minutes for each scenario beyond the first. 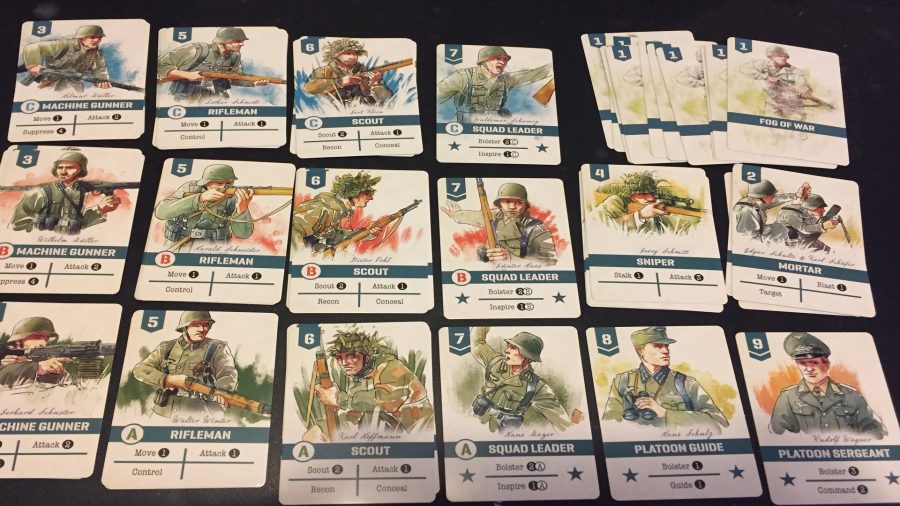 Each turn, players draw four cards, one of which must be bid for initiative. The remaining three will be played during a player’s turn. Once both turns are done, players draw four cards again and repeat until one is victorious. Anyone can learn to play Undaunted in five minutes, but the fact that my wife and I were still trying new techniques into the final scenario speaks volumes for the longevity of the system. It’s a near flawless combination of sub systems.

Kitchen-table conflicts: These are the best war board games

One of your four cards will be simultaneously revealed and then discarded for initiative, and when choice is limited, you’ll be spending some time thinking about which card to lose. Added tension comes from the fact that the current initiative holder wins ties, incentivizing players to bid higher. Initiative not only allows you to play your hand first, it also protects it. If one of your tokens takes a hit, a corresponding card must be permanently removed from the game.

The order in which you remove that card begins with your hand, then your discard pile, then your deck. If you play second, and take hits, you could end up with only one or two cards to play on your turn. Every turn begins with a battle of wits while you eye your opponent and the board state wondering whether or not it’s worth giving up your valuable scout card for a better chance at going first. 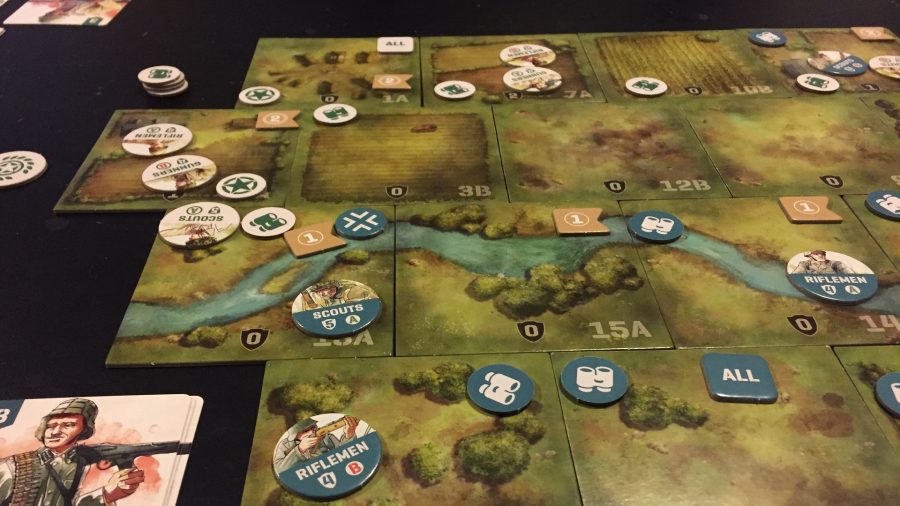 Deck Management is also elegant and, dare I say, thematic. The small number of cards you begin a scenario with probably won’t see you through, so you’ll be using your squad leaders and platoon sergeant to acquire more cards from the supply to bolster the chances of drawing a particular token’s cards, or else protect them against taking hits.

The problem is, as with every deck builder, that the more cards you take from the supply, the chance of drawing each one decreases. Managing what to pick up from the supply and when is as important as positioning your squads well on the map.

Undaunted isn’t as detailed as some war board games, but that doesn’t mean the setting is pure window dressing

There is only one useless card – the fog of war – and it is only acquired when your scouts move into and ‘scouts’ an unknown map tile (or by an opponent’s own scout’s special action), something that is required before other units can advance there themselves. By broadening your movement options, you are also filling your deck with useless cards that can only be removed by a special action of the scouts themselves. Your deck’s cohesion is directly tied to how widely your platoon is dispersed on the map and how long you take to shore up lines of communication. If only your opponent would sit still and let you, right? It’s a brilliant mechanic for keeping deck management an important part of player strategy while covering issues of command and control out in the field.

As for the actual wargame itself, Undaunted is not as detailed nor as ‘accurate’ as some of the more simulation oriented boardgames out there. This is not Advanced Squad Leader or Combat Commander. That doesn’t mean, however, that the setting is pure window dressing.

Undaunted encourages players to use their machine gun elements to suppress the enemy while riflemen move to take and hold valuable positions. Officers are entirely abstracted by their deck and hand management abilities. Attached mortar teams can only lay down fire on a previously declared tile but they work to force enemies out of position or remove cards before you launch your own assaults. 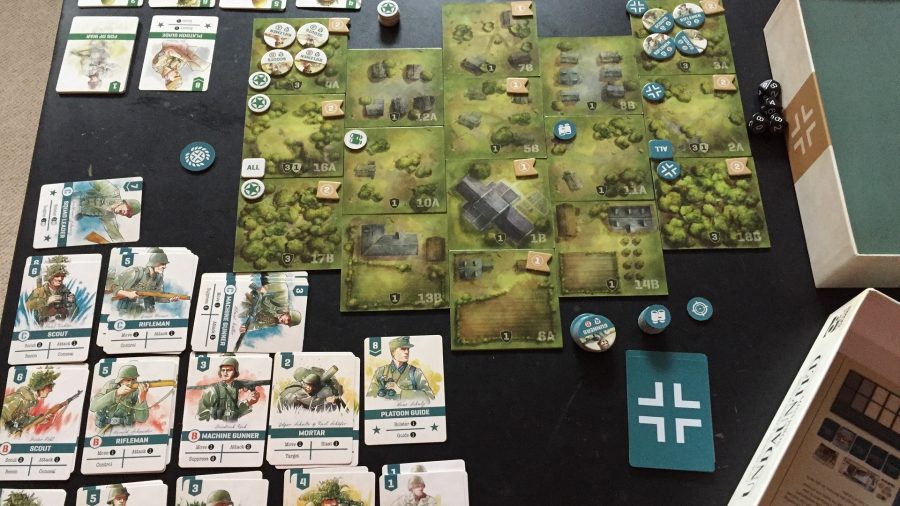 Undaunted makes these roles clear from the limited actions of each card. Players don’t need to be knowledgeable about WWII American squad tactics, the game will nudge them in the correct direction through its mechanics. I found trying to follow sound tactics was rewarded well enough.

To level a criticism, attrition can become a factor as both players build their decks. Feeding troops into meat grinders to capture or deny a victory point or else sitting a tile or two away and blasting at each other for a few turns occasionally became the name of the game, but this happened infrequently and we found ourselves often better suited to steering away from this and instead engaging in a bit of a dancing around the map. The artwork on that map, on the cards and the scenarios themselves help to situate players as well. Scenarios cover some interesting engagements and map layouts, introducing new mechanics at a steady rate and providing a narrative background for those interested in the struggles of the 30th.

Also, as an interesting thematic note, each card in a set is visually similar but distinct. All riflemen are in the same pose, for example, but each card in that set has a unique name and face. When your riflemen token takes a hit, and you remove a card permanently, you’re always looking at an individual. It’s a nice touch.

Blitz, bulge and boom: These are the best WW2 games

I’m incredibly happy with Undaunted: Normandy. I realize there is almost no criticism here, and really, I think that’s fine. It is a simple, elegant, and entertaining hybrid wargame/deck builder. The only thing I can do is ask for more and it seems that is what I’ll be getting when the sequel – Undaunted: North Africa -comes around and adds vehicles. Do yourself a favour and give this unique tactical WWII game a shot.