Welcome to North Africa, 1940. You are a member of the Long Range Desert Group, a collection of volunteers from the British Army in North Africa that specialises in long-range reconnaissance and surgical raids behind enemy lines.

Or, you’re an officer in the Royal Italian Army, tasked with defending your country’s colonial holdings on the African continent and pushing the British back into Egypt. Either way, welcome to the deck-building tactical wargame Undaunted: North Africa.

This is the sequel to last year’s Undaunted: Normandy, which featured similar card-based tactical combat between American & German soldiers across various battles during Operation Overlord. Something that’s worth highlighting straight away is that, while Undaunted: North Africa uses the same system as Normandy, it’s actually a noticeably different game, especially in terms of the level of action it portrays. I have to say I was looking forward to playing something of Undaunted: Normandy’s scale and design set in North Africa, so finding out that it was actually more focused and small-scale was a tad disappointing, but not deal-breaking.

To summarise the first page of the booklet:

It’s mainly the first one that surprised me the most – playing through North Africa feels more like a table-top version of the iconic Commandos video games, as opposed to, say, Company of Heroes. 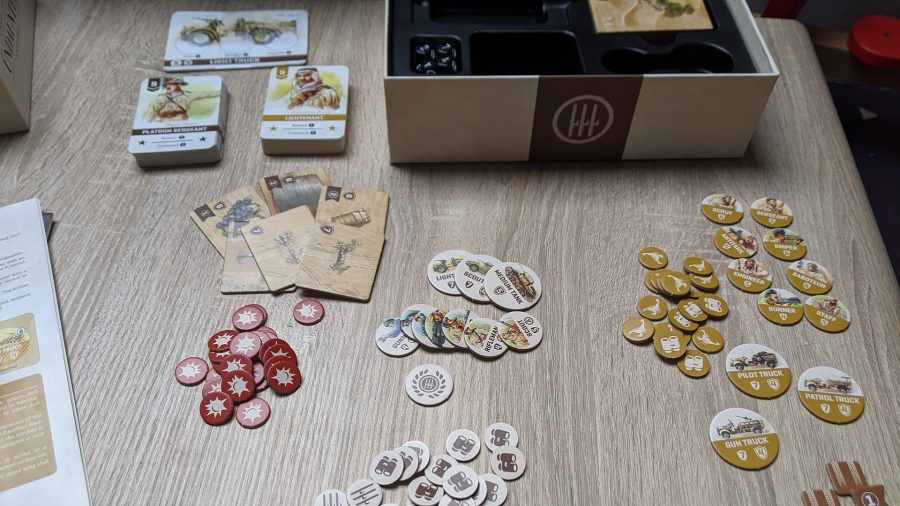 For those who aren’t familiar with the series however and are coming to them fresh (much like I did), the Undaunted titles are card-driven tactical war games that involve elements of deck-building, but also a ‘board’ where counters move, attack each other and try to complete their objectives.

Each turn consists of some weighty tactical decision making

It’s not a ‘CDG’ (card-driven game) in the same way as you might describe one of GMT’s creations, but cards are used to facilitate actions. Each combat counter has an associated set of cards (bar the vehicles) that can start, or be drafted into, your deck. Each turn you draw a hand of four cards – one of which is used to determine initiative and the other three can be used to issue orders. You can only issue orders to the cards that you have in your hand, though, which proves a fascinating alternative to other command-and-control systems that try to capture the uncertainty of battle.

Each turn consists of some very weighty tactical decision making. To begin with, you may not even get the cards you want but must make do with what you have. Even the initial Initiative choice can be nerve racking – there is a generic card that both sides have called ‘Fog of War’. It’s a useless card that you accumulate as you scout out the map for your forces to move into (a unit can’t move into a space unless it’s been scouted by the Scout). You can’t get rid of it other than with a specific action the Scout can do called ‘Recon’, but you CAN use it to bid for initiative. 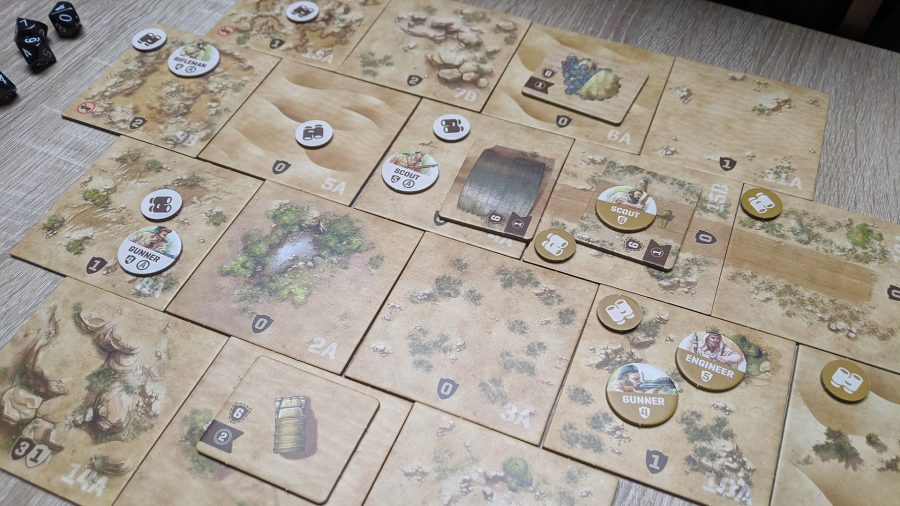 Since it only carries a value of ‘1’ however, you’re not going to win that bid. Best case scenario is that your opponent also chooses to get rid of a Fog of War card and so it’s a tie. When initiative is tied, the player who currently has initiative keeps it. But if you don’t have initiative, what do you? Keep your good cards so you can make your turn more powerful? Spend a good card so you can go first?

And that’s before you even decide what to do with the cards you have left during your actual turn. I’ve found that trying to ‘rush’ objectives can be useful if you happen to pull the right card combinations, but never under-estimate the value of trying to suppress or otherwise kill a key opposing unit. Many scenarios involve specific ‘kill’ objectives anyway, but for the control/destroy missions, making sure the enemy’s Demolition Expert or Rifleman is killed early will slow down your foe, giving you time to complete your objectives.

Comrades in arms: Discover the (other) best war board games

The amount of cards a unit has in your deck represents its ‘health’ of sorts, and each scenario typically only sees one or two copies of a unit’s cards in your deck to start with. If you can get hits early and remove cards from the game before they can ‘Bolster’ to get more cards into their deck, you may be able to take out a unit before it has a chance to do anything significant.

There’s no range in Undaunted, but shots are harder to land the further away you are. Combat involves a simple D10 roll, and you have to score higher than the opposing unit’s defence value, which includes all modifiers gained from range and terrain. 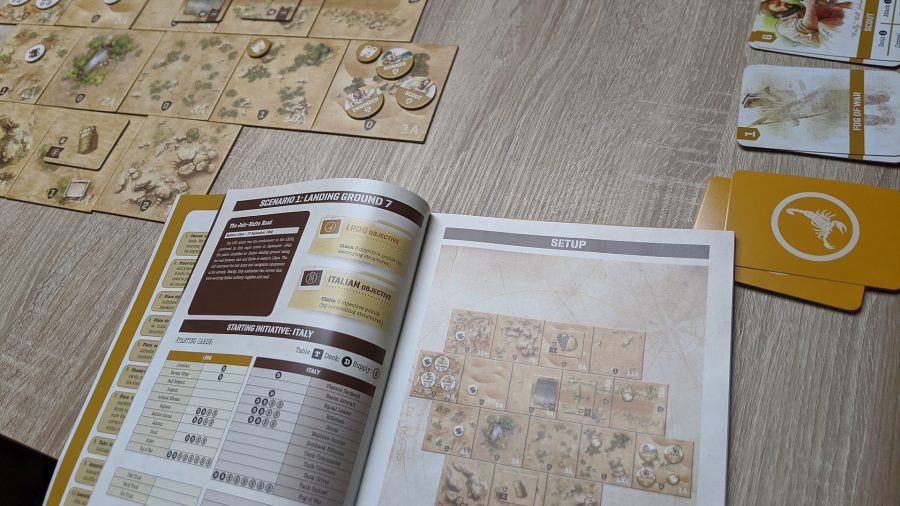 The eleven scenarios in Undaunted: North Africa are quite varied – although they are themed around the exploits of the LRDG specifically. Thankfully this light bias doesn’t prevent the Italians from getting interesting objectives, but at the same time their forces are more ‘regular’ and so don’t have as many bespoke mechanics associated with them.

The ’balance’ can be a bit immersion breaking in some scenarios

Where the LRDG would be tasked with destroying a building, the Italians simply need to ‘Control’ the space it’s on and only the LRDG require a roll for success. That said, the Italians are compensated by being the only side that gets a tank and air-support, which can be very decisive in the scenarios where they appear. There’s plenty of anti-vehicle support across both factions however, as both sides also feature lighter scout vehicles and trucks.

The good thing about the scenarios is that they’re fairly balanced no matter which side you choose to play. Each mission has an introduction blurb that explains what happened in history, especially with regards to who won/lost, but so far it doesn’t look like any deterministic design has been employed which is good to see. Sometimes I find this ‘balance’ a bit immersion breaking with some of the scenarios, but it’s more of a niggle than a genuine concern. 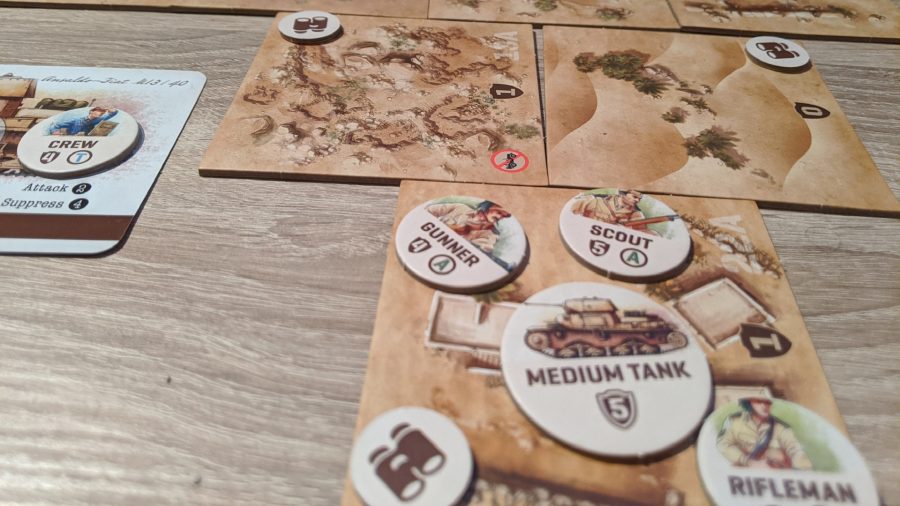 I’ve enjoyed Undaunted: North Africa – it’s light enough that even non-wargamers like my wife was able to understand how things worked and I daresay she even enjoyed herself. There are some real meaty tactical decisions in terms of how you utilise your hand and how you approach your objective. Never underestimate the die-roll – I lost the first scenario within a couple of turns because my wife just went from one objective to another and demolished each building with the first throw before I could get my forces in place to stop her.

It’s a very well made game that is available at a pretty decent price. The only reason I wouldn’t recommend this title is if you’re not a fan of either the North African theatre or are after something that plays at a slightly larger scale, like Undaunted: Normandy or even 2GM Tactics.

Serious business: These are the best board games for adults

Undaunted: North Africa definitely feels like a more scrappy, knife-fight-in-the-dark kind of tactical game. The scale is small – Squad level for the most part, and the actions are limited but surgical. Every shot counts and every turn matters, especially with the ‘perma-death’ rules. It may not empower the scale that many prefer, especially for this theatre, but I think the Undaunted system has proven once again to be an excellent new take on card-based wargame mechanics.