2019 may be remembered in the short term as the ‘Year of the Wargame’. We’ve seen several high quality titles come out this year; Steel Division 2, Field of Glory: Empires, and Rule the Waves 2 to name some of the standouts of the past 12 months. It has been a good year to be into wargaming, and Unity of Command 2 has been waiting to make a dramatic entrance here at the end of it.

And boy, what an entrance it is. Unity of Command 2 has managed to enthrall me as few other recent wargames have; this is one you don’t want to miss.

Unity of Command 2 (for brevity, UoC2) follows the Allied armies in the Western theatre from 1943 to 1945, featuring the player as a sort of ‘supreme commander’ of American, Free French, British, and various Dominion forces. The campaign is broken up into a series of Panzer General-style IGOUGO operational engagements (which I’ll talk more about in a moment), each focused around a specific battle of the campaign, such as Sicily or Rome.

The player is prompted on the campaign map to purchase cards that will provide bonuses, such as additional air strikes or more supply trucks, or to buy upgrades for their Army HQs to allow their subordinates to perform special actions in combat. Once these have been purchased with prestige, the currency in the game, the player can begin the missions in the theatre. 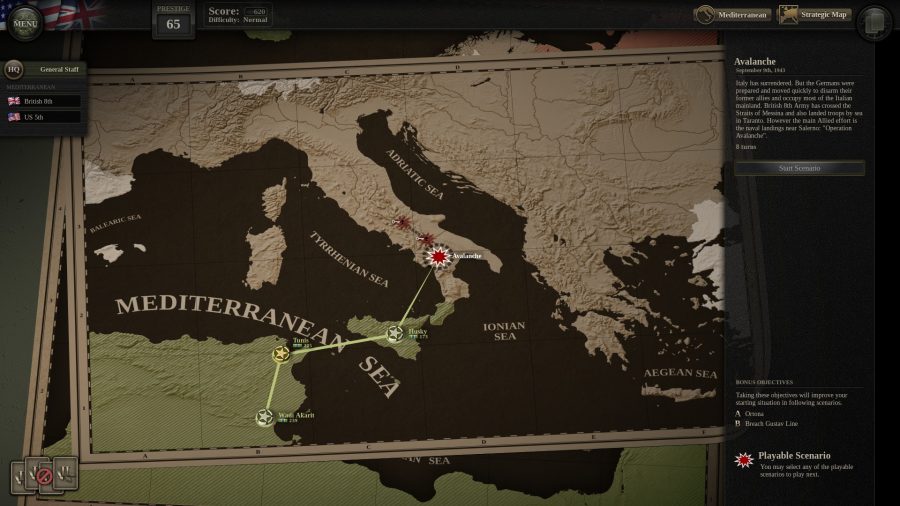 Each battle features specific objectives to capture with various sub-objectives that will give bonus units or prestige. Your forces will generally outnumber the enemy, but the Axis forces are frequently well-fortified in chokepoints. With unlimited time, these could eventually be cracked with minimal casualties. However, the genius of UoC2 lies in its turn-timer. Depending on the difficulty level, the player only has a few turns to capture secondary objectives, and every turn the player misses capturing a primary objective the prestige value of it falls.

This forces decisive action in order to meet these goals, and UoC2 shines in making the player take risks to meet these time constraints. Is it worth potentially losing some divisional strength, or even the whole division, to push across a bridge? The answer to this question would be ‘yes’, more often than not, if these missions were one-offs and not connected. But the other factor that makes these battles so interesting is that all of your units are persistent. Veteran units can be completely destroyed, and only brought back in following missions as smaller, greener units. Each mission also has a score that’s influenced by time spent, enemies eliminated, and friendly units lost, and the final score will also affect your prestige.

The player can go back and attempt a mission again if things went south, but at a penalty to their final score. So in the long run, the player has to weigh their choices to both preserve their forces but also accomplish their objectives. Balancing these two priorities is the core of the game, and making those decisions results in some of the most enjoyable wargaming in recent memory. 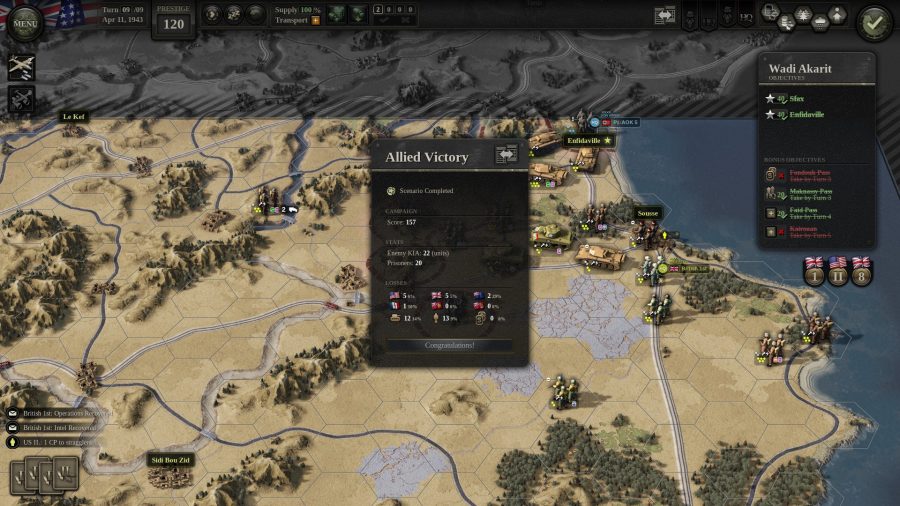 The units in this game are grouped into divisions (and occasionally brigades) under a specific army HQ. Each unit has a set of stats that covers their attack, defence, move speed, and armour. The unit will also have up to six (sometimes seven) ‘steps’, representing the overall strength of the unit.

Further complicating this are ‘special steps’ that can be added to units, such as Engineers, or battalions of Sherman tanks; these specials also have their own stats, and can also add artillery support. On top of all of that is the veterancy of the unit, which modifies the overall performance of the unit in a combat.

When hovering over an enemy with your unit selected, you get a tab showing the total strength of your unit against the enemy’s unit in an estimation of the combat, along with various modifiers. It’s a system that makes sense eventually.

World at war: These are the best WW2 games available

One of my few criticisms is that the information for understanding the game’s systems are all there, but UoC2 doesn’t explain the information that you see. It’s something that could very easily be remedied with a few tool-tips.

That being said, once you learn how the combat works, it flows wonderfully. Throw two units at each other, they could lose some steps or see them suppressed, meaning that the step will no longer count for total strength until the next turn, and the losing defender could flee. The attacker, if they won an overwhelming victory, may also sometimes have the option to attack a second time. This happens more frequently with armour and mechanized units, and is one of the more effective models of breakthrough warfare in recent memory. 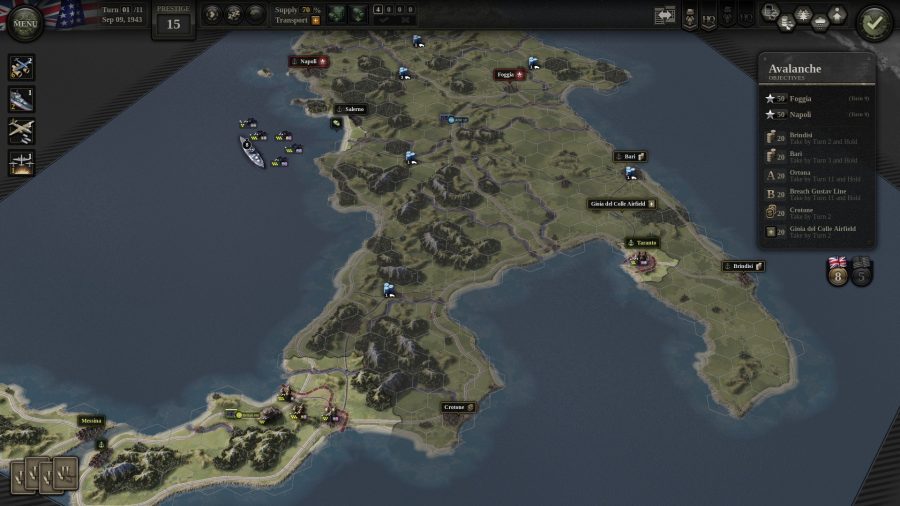 The addition of army HQs adds an extra layer of strategy to the rhythm of combat as well; units within range of their parent HQ can perform special actions to help break a stalemate. For example, a unit with an artillery component can forgo its attack to shell the enemy, suppressing some of their steps and making them an easier target for another unit. HQs can also allow for their subordinates to build bridges (or destroy them), making for easier travel across major rivers.

This is balanced by HQs having a set amount of points each turn, and every special action completed by a unit will use of some of these points. Over the course of the campaign, just as divisions become veterans, so too can an HQ ‘level up,’ granting them more command points, or making certain abilities cost less. Proper utilization of HQ abilities can be the deciding factor between a bloody draw or a complete triumph over the enemy, and having this ability is one of the ways that UoC2 sets itself apart from its competitors. Supplementing the excellent combat model is a frankly brutal logistics system. Supplies are carted in from off-map, and the player can establish supply depots to help bring the essentials to the troops at the front.

This is very necessary, as UoC2 takes logistics seriously. A unit out of supply for one turn will see a few small penalties, while two turns out of supply will see the unit unable to attack an enemy. God forbid you see the dreaded three turns out of supply notice because at that point the unit is essentially defenceless, with all of their steps suppressed. 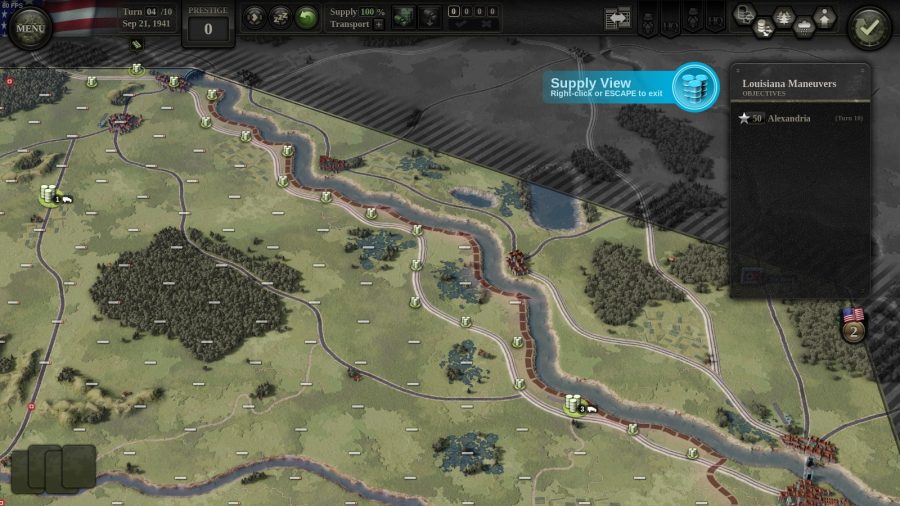 The conflict for the player is that in order to advance upon your objective, frequently you will have to commit to risky river/forest/mountain crossings to outflank your enemy, but this will often leave your troops without supply.

Managing an effective supply network is key to ensuring Allied forces get enough MREs to motivate them to fight the Germans. Fortunately for the player, the logistics system is modelled just as intensely for the Axis player as it is for the Allied player.

World at war: These are the best WW2 games available

It’s near impossible to win without cutting off a rail network or a highway from a key objective, which makes any form of decent infrastructure almost worth as much as the objectives themselves. Unfortunately for the player, the AI is fairly crafty itself.

From what I can tell, the difficulty options do not affect the intelligence of your opponent, but rather give the player tighter timetables and fewer cards to use in battle. This means that the AI has one setting, and that setting resembles one of the more competent Axis generals of World War 2. 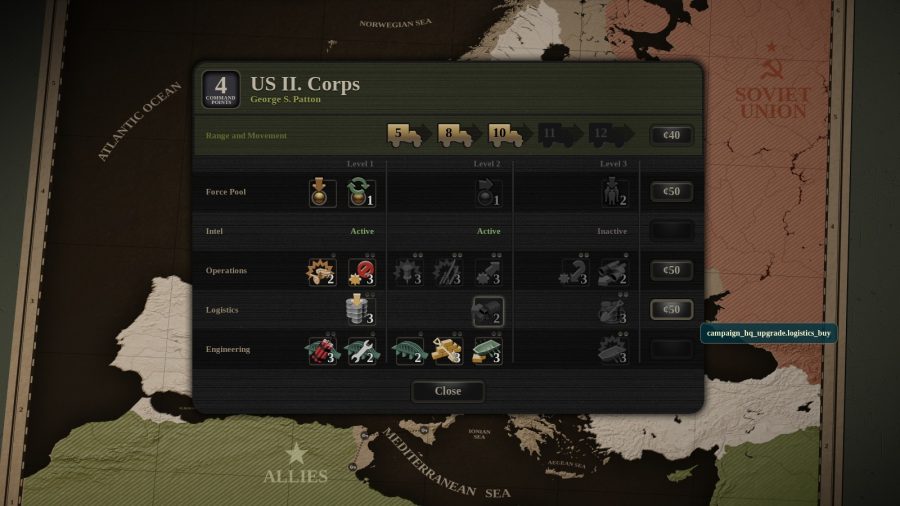 I would like to compare it to Rommel, for its smart manoeuvre and ability to exploit weaknesses in your lines, but also for its knack for making nutty strategic errors (destroying bridges that I don’t have a chance of reaching and cutting off German supply). Overall, your opposing general makes for a mean opponent that will make logistical prowess necessary to succeed. UoC2 is a marked improvement over the original Unity of Command through the depth of the new systems found here, and the more accessible campaign.

The combat works, and feels completely fair, which is something that can’t necessarily be said for all recent wargames. Completing missions feels like an achievement, because they all look intimidating from the start, and there’s incentive to go back and play them better than you did before.

Blitz it: Check out our review of UoC2’s Blitzkrieg expansion

The updated graphics are some of the best eye candy to come out of a wargaming company this year. The AI is a challenging foe, and for when you tire of playing against a machine, the game has hot-seat mode for single scenarios, allowing you to humble your roommates who think they know wargaming better than you do (they don’t).

So, should you play this? If you like Panzer General or the original Unity of Command; yes. If you like the western theatre of WW2; definitely. If you like replayable games that can present the same challenges differently each time; 110%! If you hate all wargames? Well… probably not. Unless you had some bad experiences with the first game, this is a real gem that would be a shame to miss out on.