It seems like there have been hundreds of World War 2 wargames released this year. Partisans 1941, Cauldrons of War – Barbarossa, Silent Victory, and Krim: The War in the Crimea 1941-1942 to name but a few that came out in the latter half of 2020, pandemic be damned. And these games, by most accounts, were pretty solid overall, with a few outliers below average.

However, Unity of Command 2 – Blitzkrieg is going to give these games a run for their money, offering one of the most solid wargaming experiences of the year… for the second year in a row.

In stark contrast to last year’s base game version of UoC2, Blitzkrieg puts you in the jackboots of the Wehrmacht, storming across Poland and France and etc., you’ve heard this story before and have probably played countless times in other games featuring the exact same scenario this year. I sure have. What sets Blitzkrieg apart is the excellent mechanics inherited from the game’s overall design, but expanded upon to make the new German forces feel fresh and unique.

This review was first published on November 5, 2020. 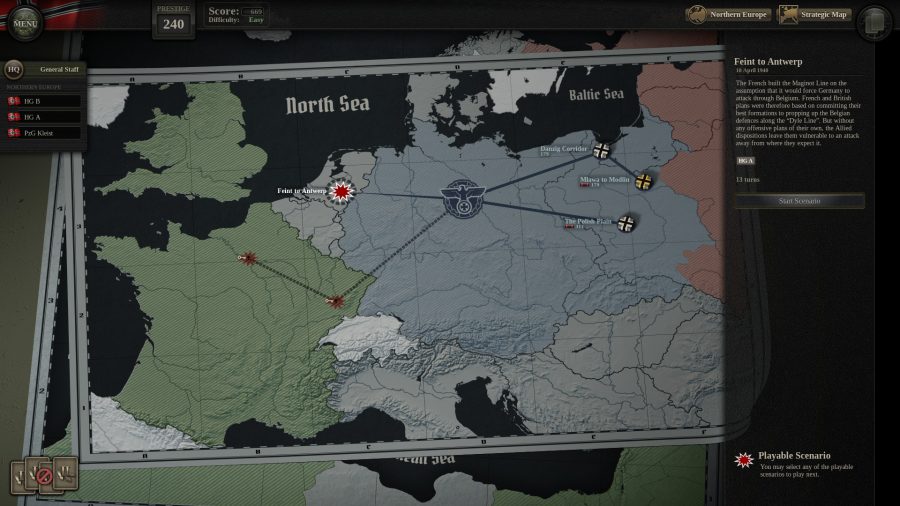 The same familiar steps and unit specializations can be found here, but German-ified, as you can attach Pioneers, Stug IIIs, and the good ol’ 88 to your units to give them bonuses in combat (Notably, recent free updates have done a great job explaining what these steps and add-ons do exactly, an issue we had with the launch version of the base game). And boy, you will need them.

The playstyle is skewed towards rushing the enemy, encircling them

The first scenario is pretty much a breeze for your units but you will face some stiff resistance very shortly after. Puzzlingly (maybe realistically?) many of your units do not arrive with much in the way of support, so very few units will have artillery to un-entrench defenders or engineers to help their way across rivers. Many of the points you gain will be immediately funneled back into improving your units so they can pack more of a punch.

Your forces showing up without many support steps highlights the differences between them and the Allied units you command in the base game, but the army groups are quite different as well. Your command groups will have a notably different upgrade tree from the Allied armies, with improvements to rapid movement and redeployment more common than any kind of “turtling” defensive business. No sir, the Wehrmacht is not made to sit around, and the playstyle is certainly skewed towards rushing the enemy, encircling them, and moving on while leaving some units behind to finish them off. 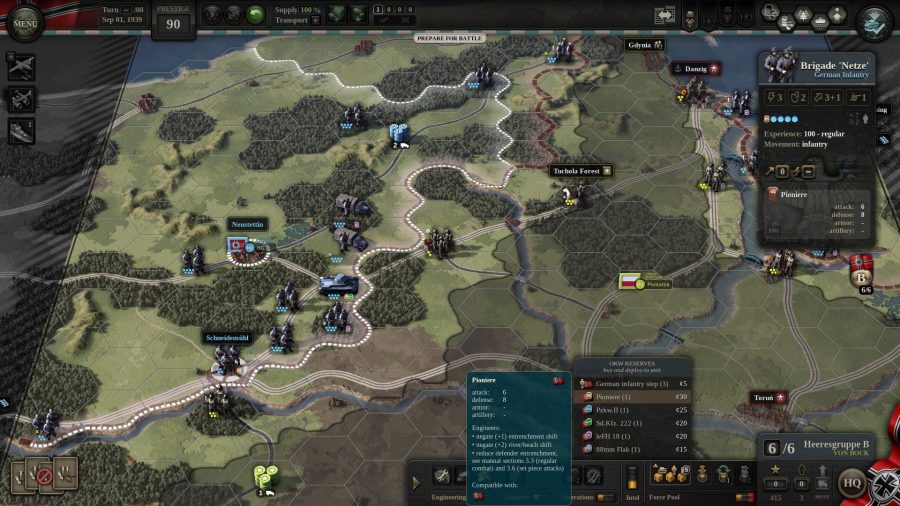 You get a healthy portion of scenarios to outwit and outmaneuver the Allied forces in Blitzkrieg. The base game currently has 44 scenarios, having added a decent amount since launch, while Blitzkrieg offers 13 historical scenarios with some ahistorical options tossed in for a total of 25. That’s not too shabby for an expansion, especially since the scenarios are largely pretty great.

The world at war: Check out the best WW2 strategy games

You’ll follow your armies first into Poland, then into Norway, outrunning and encircling the enemy along the way. Of course, if you fight through Poland fast enough, you could end up invading France early, leading to every WW2 enthusiast’s favourite fantasy, Operation Sea Lion. 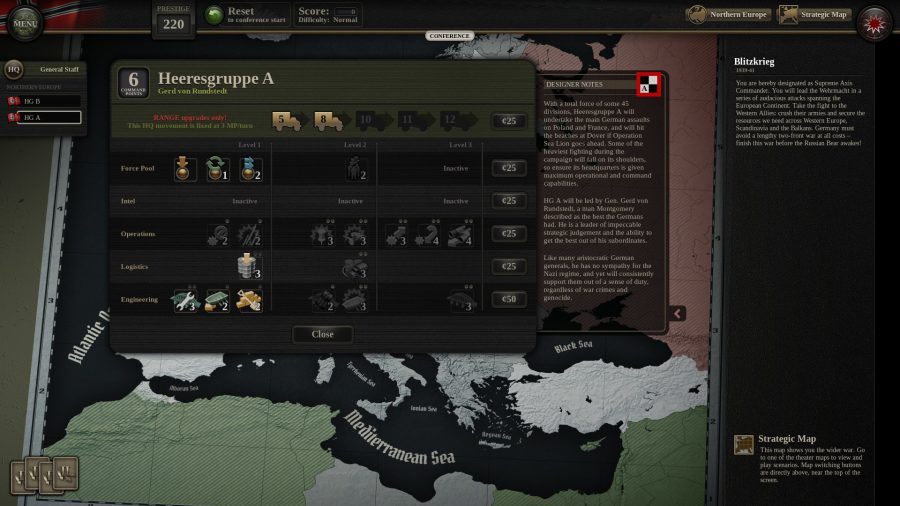 You really will have to play well to hope to get to that point, as Blitzkrieg is not easy by any means. Your forces will frequently be stronger than the enemy’s on a unit-to-unit basis, but they do love to entrench in cities and slow you down, especially if they’re sitting on a key railroad junction.

This of course, is the main concern for a budding Wehrmacht commander, as the army will frequently outrun supply lines, and a lot of the maps are pretty dang huge. It is incredibly easy to outrun your own supply lines and end up arriving at the gates of Warsaw, out of ammo and fuel.

Railroads are the most important terrain feature of the game by far, as you will need to keep those corridors open and constantly pushing forward if you want to complete your objectives. Frustratingly, you can’t have your troops use the rail to quickly travel, but fortunately, you can use the reliance on trains for supply against the enemy, and cut off the railroads at their source with your very fast units. 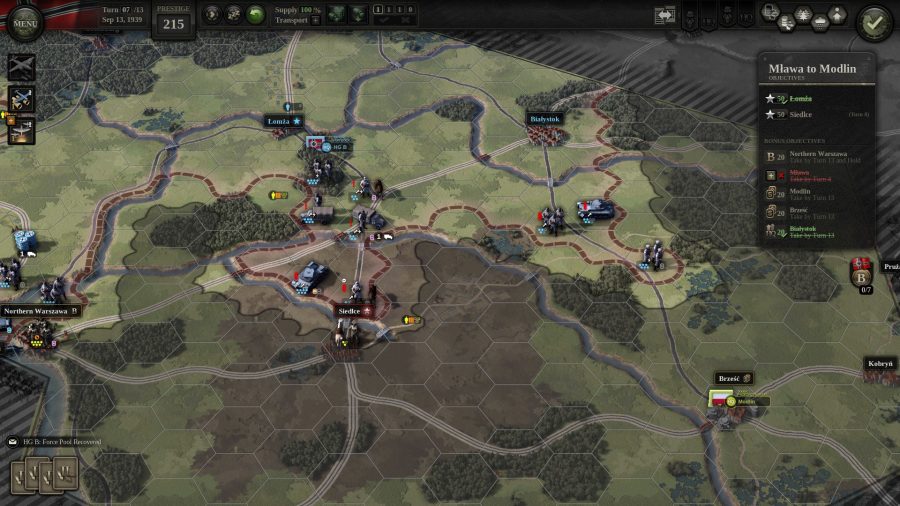 But while you could wait for these pockets to starve as the Allies back in their campaign, time is rarely on your side in Blitzkrieg and you will need to throw units against trapped enemies to meet your demanding time-tables.

And they are very demanding. I was only able to meet the time/point threshold for the ahistorical route when playing on Easy, with extra points at my disposal and more time to capture objectives. It’s something that the game will yell at you constantly: KEEP MOVING.

Unity of Command 2 offered a breath of fresh air last year, offering an improved experience over the first game and a standout among other turn-based games at the time. Blitzkrieg doesn’t change the basic formula of the game too much other than changing your troops and the scenarios, but UoC2 is good enough as is that this makes for a really solid addition to the game. If you enjoyed the base game and want more, Blitzkrieg will be sure to scratch that itch.