Wakey wakey, rise and shrine. It’s time to rise from the slumber of over 60 million years. Luckily you won’t need to worry about bed head because, as a member of Warhammer 40k‘s Necrons faction, you were forced long ago to give up your flesh (and hair) in order to undergo biotransference, and become a living metal skeleton, immortal and fearsome.

The Necrons are the Warhammer 40k Xenos equivalent of the Undead in many fantasy settings. Taking inspiration from both the Terminator movies and the Egyptian dynasties of old, these immortal cybernetic beings rise up from long-buried tombs, marching into battle with arcane technologies beyond the ken of mortal men. Much like their visual inspiration, these robotic skeletons refuse to die – Reanimation Protocols ensure that the living metal husks rebuild themselves, even as they drag themselves heedlessly forward into overwhelming firepower.

With the launch of 9th Edition, the Necrons also got a huge update to their miniatures range, including some excellent centrepiece models, such as Szarekh The Silent King. If you’re interested in asserting your dynastic dominance over the young whelps that now claim to rule the galaxy, you’re in the right place.

Before we delve into Warhammer 40K’s pre-prehistory, however: if you’d like a slightly higher-level summary of all the fearsome aliens in the grimdark galaxy, you might prefer our guide to Warhammer 40K Xenos factions. Alternatively if puny humans and/or hellspawn are more your jam, check out our guides to the Chaos and Imperium factions.

Still with us? Then let’s go back in time a long, long, long way… 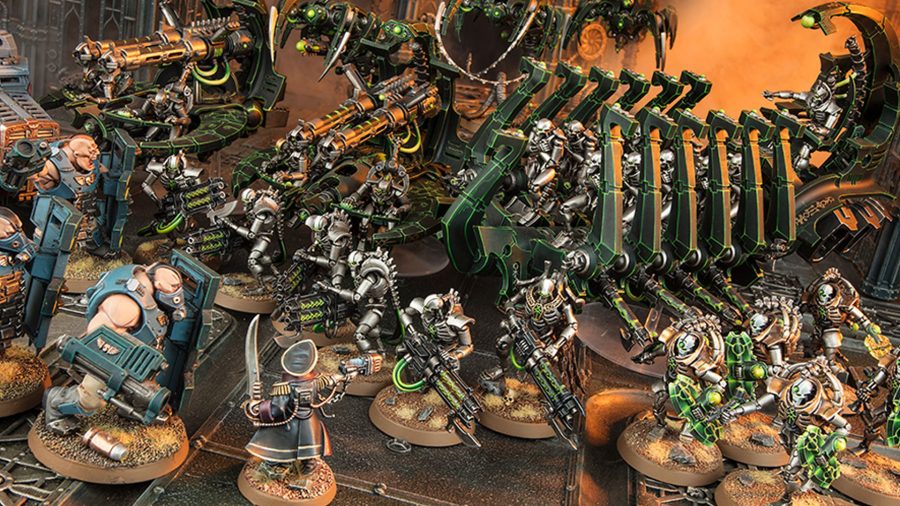 Necron lore is an interesting one, as they have been retconned at least once since they were brought into existence in Third Edition. For simplicity’s sake, we’re focusing on the current iteration, though there are many places you can read up on the older lore.

Necrons were once the organic, short-lived Necrontyr

So, then: the Necrons existed as a flesh and blood race known as the Necrontyr. They were a race of warriors with short lifespans, but exceedingly violent. Their obsession with death was the only thing that matched their penchant for internal politicking, and internecine conflicts were causing the empire to slowly fragment.

To unify them, Szarekh, one of the many Silent Kings of the Necrontyr empire, thrust them into conflict with The Old Ones, the technologically advanced race responsible for the creation of the Webway, the network of tunnels through the Warp. 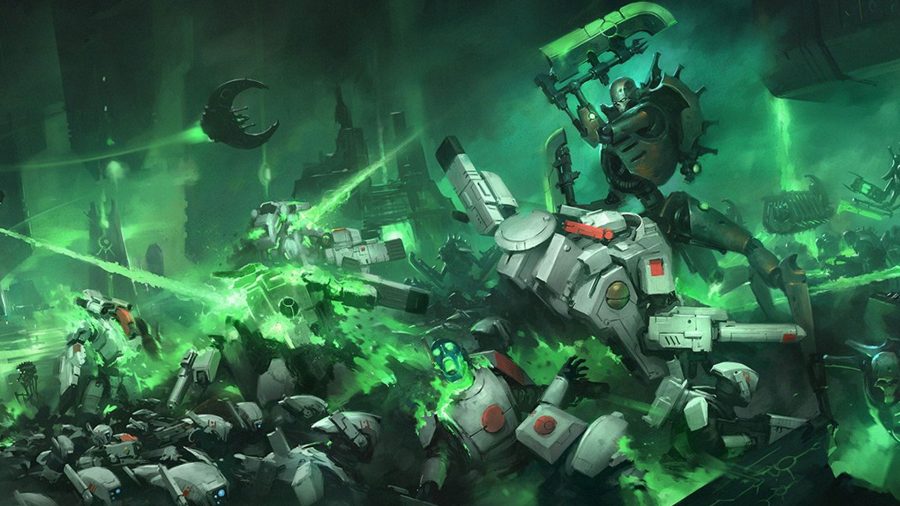 This war was fought over the key to immortality itself, and was all-consuming. Faced with defeat, Szarekh chose to ally with the C’tan, duplicitous star-eating beings, who subsequently gifted the Necrontyr immortality via the horrors of biotransference, for a price: their souls.

Roboute’s sons: Our guide to the Ultramarines chapter

Records of the War In Heaven are largely apocryphal and fragmented, but regardless of the outcome, the Necrons hunted down the remaining C’tan, and either enslaved or destroyed them. Szarekh, now in complete control of the legions of Necron before him, devised a great plan, and ordered his subordinates to create tomb worlds, in which they were to slumber for 60 million years, before jetting off into the void of space beyond the Galactic rim, with unknown purpose. 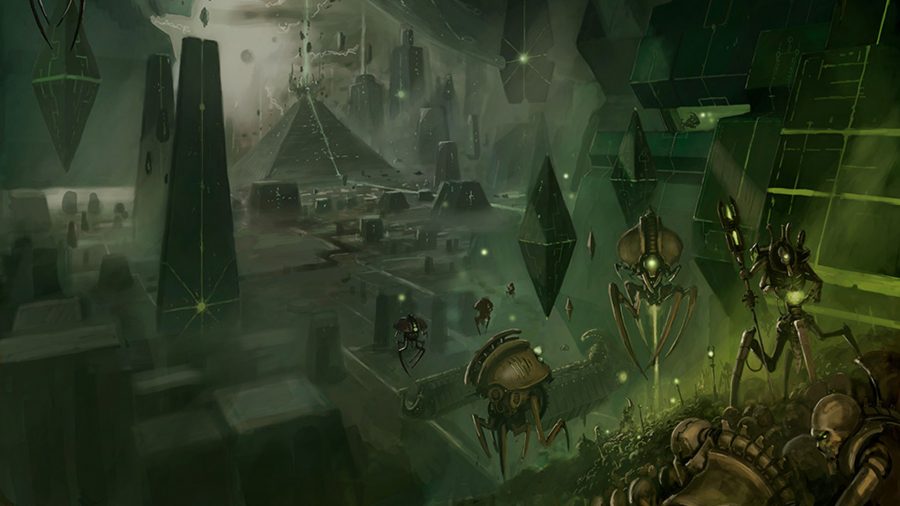 Millennia later, in the late 41st millennium (or early 42nd, depending who you agree with) the has returned (though no-one knows precisely why). Chief amongst assumptions is that he witnessed the true vastness of the Tyranid fleets, floating dormant towards the galactic core, and returned to save his civilization from being devoured.

Awakening tomb worlds threaten the Imperium - and everyone else

Necron forces have now begun mobilising across the galaxy, under the controls of the many mad Triarchs who control the great Dynasties. While they are technically all under the reign of Szarekh, the Silent King, every dynasty believes itself far better than the next. Still, they present a threat to the forces of the Imperium, and their ability to make use of the material Blackstone even makes them a threat against the insidious forces of Chaos. 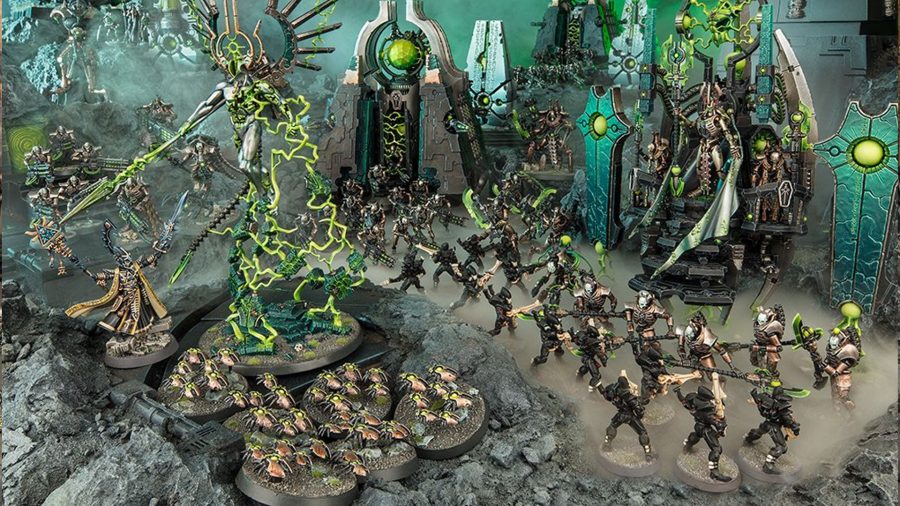 During their long slumber, many Necrons went mad – their neural circuits corrupted by the long sleep, entropy slowly ruining them. As such, a wide cast of characters exist within their ranks, from obsessives to strategic geniuses. All of them are mighty warriors, with critical flaws – for a tragic streak runs through the Necrons, and finds itself most prominent in its roster of flavourful characters.

The Silent King himself, Szarekh, is the most advanced and dangerous Necron of them all. An android so complex in creation, he is beyond the reckoning of most other life forms. His exceptional new model in 9th Edition sees him float into battle with his Triarch, on a throne sustained by an enslaved C’tan – brutal in combat, a powerful tactical centrepiece, he’s a great character to build towards.

Illuminor Szeras is the Necron master of all things biotransference: a mad doctor, if you will, obsessed with tinkering with living metal, he takes inspiration from othering life forms (by studying them as he atomizes them) to improve the necrodermis of the dynastic forces. 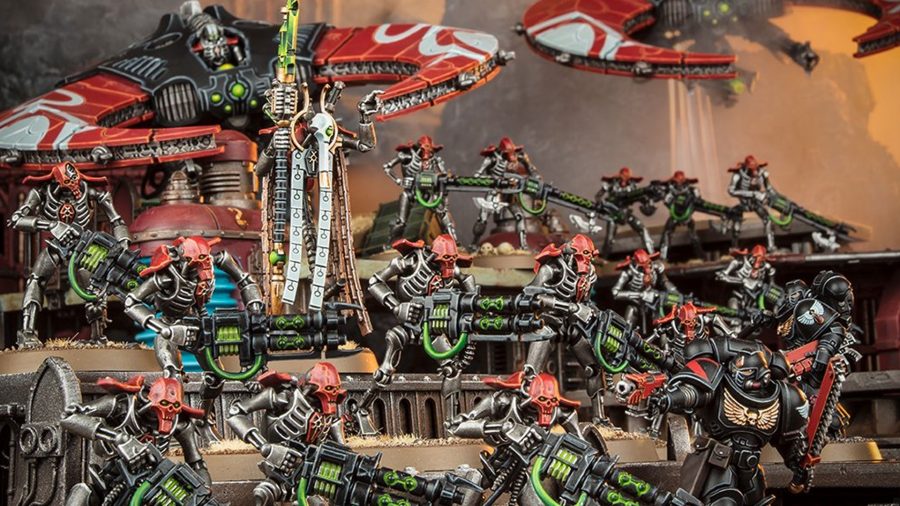 Perhaps the most well known of all the Necron characters, Trazyn the Infinite is a kleptomaniac ( sorry, ‘archivist’), who creates grand ahistorical dioramas in his giant museum palace. In battle, he transfers his intellect to different constructs when defeated, cackling as his foes try in vain to kill him.

A walking supercomputer, Imotekh is perhaps the Necrons’ greatest tactical mind. Woken by a lesser Necron to fight in a petty conflict in the Sautekh Dynasty, Imotekh became the Phaeron of that Dynasty in short order, thanks to his tactical acumen.

Rules as written: These are the latest 40K 9th edition codexes

A Chronomancer of most prodigious skill, Orikan is a prophet who has not forgiven Szarekh for submitting to the will of the C’tan. A grand manipulator, he alters the flow of battle and time itself with his skills, steering the galaxy to some unknown temporal destination.

v is considered perhaps the mightiest of all Necrons by some, and a brigand by others. Awoken in fine health (for a Necron), Anrakyr tasked himself with unifying the remaining Necron forces. Travelling from one tomb world to another, he wakes Necrons from their stasis, demanding a tithe of warriors before he moves on. This makes him a little contentious. 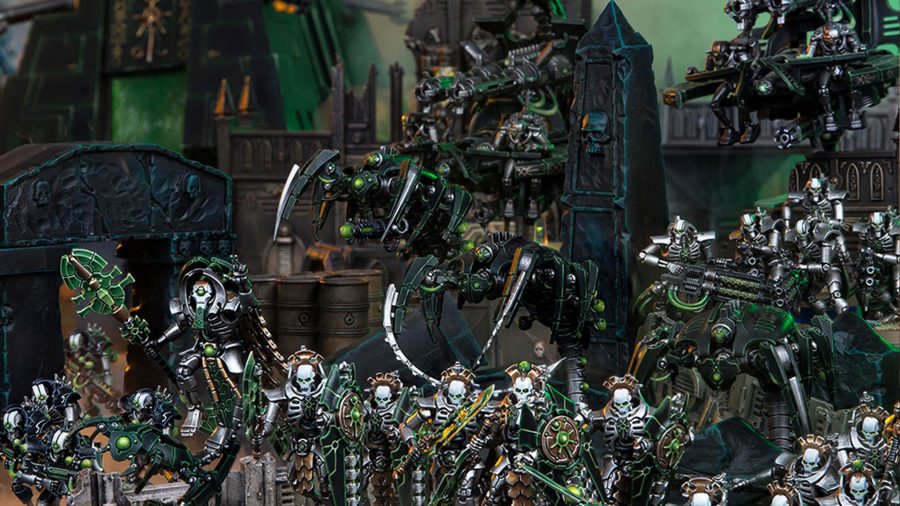 Zahndrekh lost his mind upon reanimation; unable to see the universe as it currently is, he sees his foes as honourable Necrontyr, his consciousness unable to conceive of the cruel reality inflicted on his race. Despite this, he is a keen tactical mind, one of the greatest the Necrons have ever seen.

He is protected by his loyal Vargard Obyron, who shields him from other Necrons who find Zahndrekh’s madness a liability, and enemies who see him as a prime target. 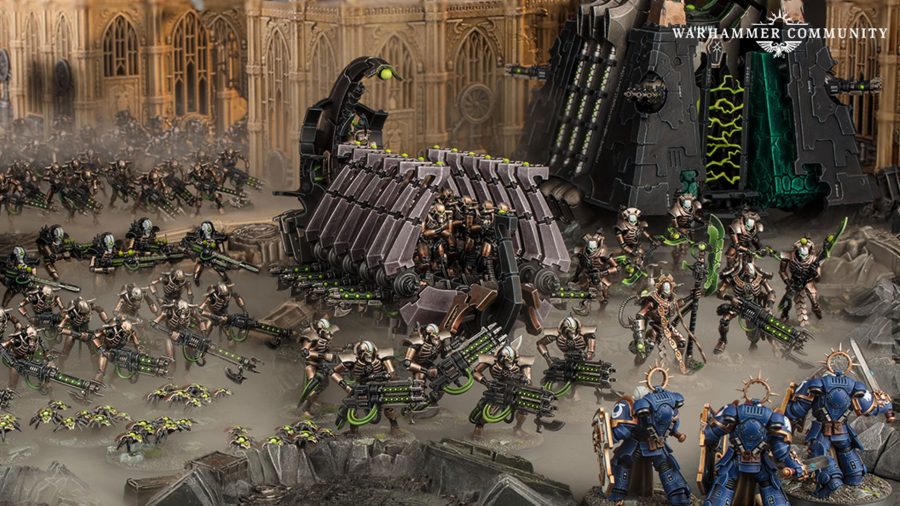 How to Play Necrons

Necrons are a formidable force on the tabletop, incredibly durable thanks to all-round good saves, and the faction’s unique Re-animation Protocol rules. They benefit from largely good shooting – if only at shorter ranges compared with other shooty armies – but also surprisingly good melee, in the form of the new Skorpekh Destroyers, plus a number of decent buff characters, such as the Technomancer and Chronomancer.

Neat and tidy: Our guide to Warhammer 40K detachments

They can also field a number of interesting tactics, including a few that are potentially game-changing such as the Expansionist battle traits that buff movement, and improve the Objective Secure rules for the troops with it. 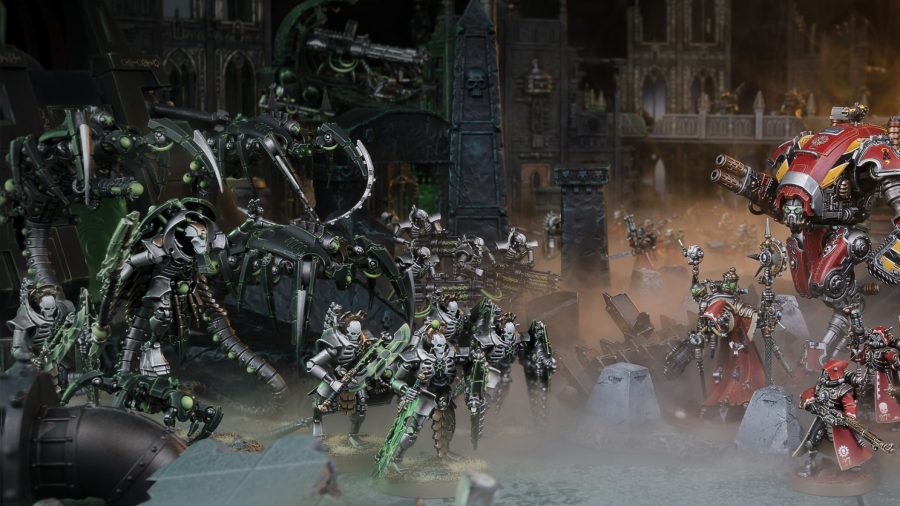 Owing to their reliance on close- and mid-range weaponry, Necrons like to take advantage of the new, smaller table sizes – sitting on objectives and whittling away at foes as they weather the storm of return fire and melee.

Reanimation Protocols allows Necrons to repair enemy damage over and over

The main unique special rule for Necrons is Reanimation Protocols. This is a powerful rule that triggers in melee and shooting phases, allowing for exceptional durability. Couple that with Command Protocols, which allow you to trigger a number of buffing effects throughout the battle, and you’ve ample flexibility and survivability both. Despite the majority of their forces being unkillable damage sponges, with little in the way of return fire compared to more damage focussed armies, they do have their damage spikes: the C’tan Shard of the Nightbringer is one of the strongest melee units in the entire game right now, and the Void Dragon is no slouch, either. 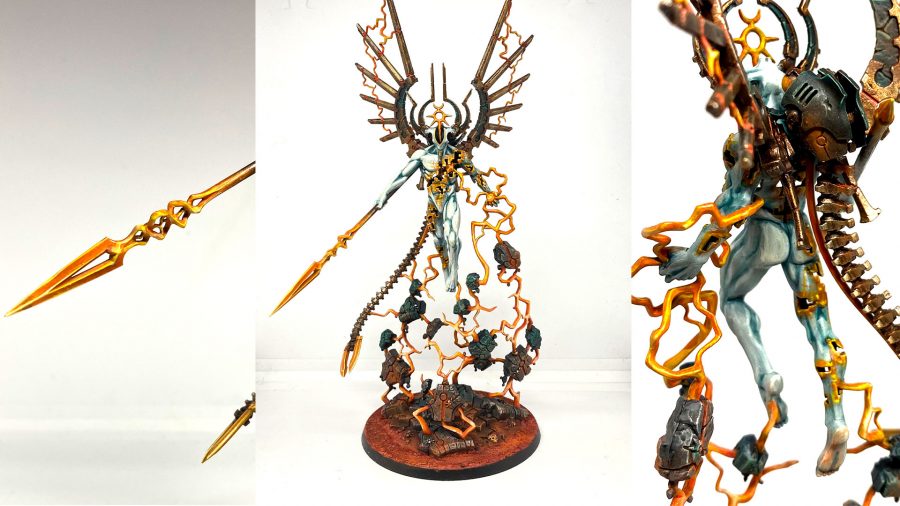 Armies tend to be built with a focus towards overwhelming tides of troops of various forms, or towards a handful of standouts, such as C’tan Shards, Canoptek Doomstalkers, and Doomsday Arks. As previously mentioned, Skorpekh Destroyers are the hot pick: tough to kill, strong in melee. Take them in a unit of six, and these feisty, many-legged blenders are almost a must-have unit for any Necron force.

Sons of Caliban: Our guide to the Dark Angels Space Marine chapter

The bottom line is simple enough: although Necrons are fairly technical, they are forgiving due to their durability, and the brute force of their weaponry. 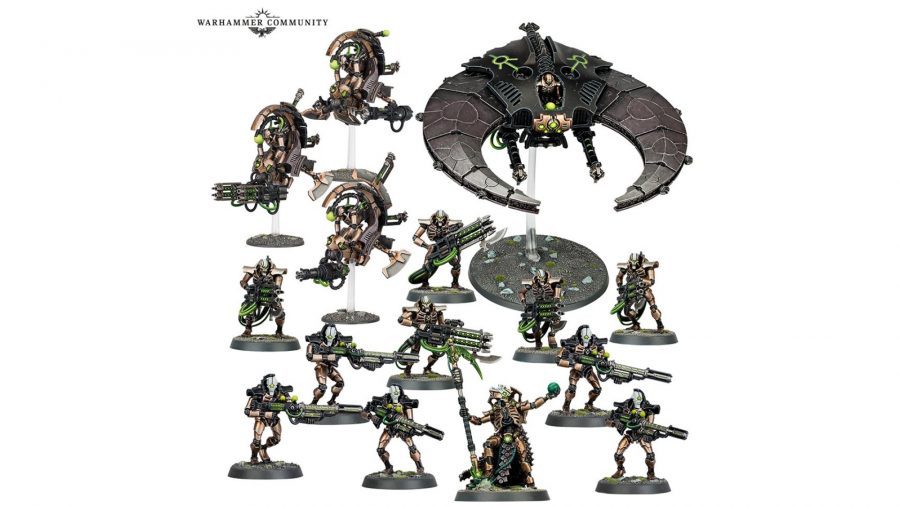 Building from a Necrons Patrol Box

The contents of the Necrons patrol box are a good start, especially since, if you build the ten immortals as two units of five, you’ll only need one more Troops choice, and a HQ, to get to the minimum for a battalion detachment. A good next move would be picking up the Recruit starter set, which comes with a Royal Warden, a unit of Necron Warriors, and some Scarabs.

From here, you’re free to throw in some units of choice. If you want to go melee, Skorpekh Destroyers. Long ranged murder? Take a Canoptek Doomstalker walker – one of the coolest looking models in the range. The galaxy is yours for the taking. There are no truly bad choices in Necron armies, so, with a strong core, you can simply build out however you want. 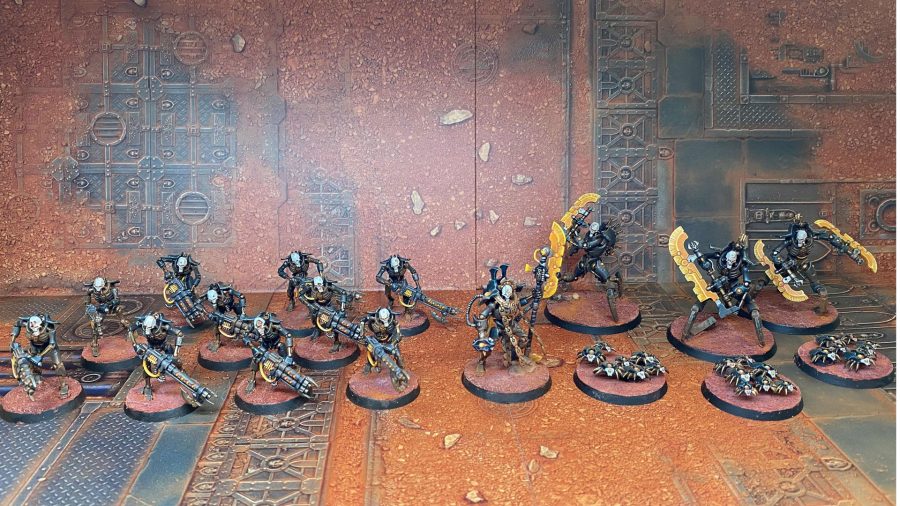 As with most armies, Games Workshop shows off a variety of paint schemes for the various Dynasties in the Codex, and via the Warhammer YouTube. As of their introduction as part of the 9th Edition starter, Necrons have been designed to be fairly easy to paint – more so, even, than their older models.

They take a heavy wash and a drybrush over metallics really well, especially if you chuck a spot colour like a bright green, orange or blue on their weapons. If you want to go a different way, my top tip is to separate the armour panels and the innards – for my necrons I focussed on dark panels and brassy metal innards, with white heads as a nice eye-catcher.

I also dusted up my forces with some weathering powder, liberally applying it with a soft brush and spray-varnishing it in place, in order to convey the feeling of them having been buried in the sands of a dead world for millennia. Alternatively, you can go bright and bold;there really is no limit with these hulking monstrosities.

There you have it. A quick start guide to the immortal Necron dynasties! There is so much to investigate, should you buy the codex – strategies, dynasties, custom dynasties, a whole range of troops – I didn’t even touch on the awesome Monolith (mainly because it’s something you likely won’t get to for months or years!)

Thanks to a Ninth Edition refresh, Necrons remain a fairly competitive army, with a wonderful wide range! Have fun, and remember, The Silent King’s Will Be Done.