Warhammer 40k detachments are the essential, rules-mandated building blocks of a ‘battle-forged’ army – that is, one that’s properly structured and rules-legal for balanced play in most of the game’s formats. Detachments have been around for quite a few editions, but over the years they’ve evolved in how they work, based on how the game would prefer you build your armies. We say ‘prefer’ because you can, of course, play without organising your models and units into detachments (known as an ‘unbound’ army) – but, in practice, these aren’t seen outside of super-casual play.

Nope: in Warhammer 40K 9th Edition, if you want to go beyond the most basic, stripped down version of the game, you need Command Points (CP) and access to the stratagems (powerful in-game abilities) that those juicy CP can buy you. And to use any of that – you’ve guessed it – your army has to be ‘battle-forged’, with all of your units organised into neat and tidy Warhammer 40k detachments. Battle-forged armies are also a requirement for matched play at official events such as tournaments.

Fortunately, after no small amount of faffing around with them during 8th edition, Games Workshop has really simplified and streamlined the business of organizing your units into Detachments in 9th.

The below rules cover the basic principles of detachments and what you can do with them across all factions.

In 9th edition, you are allotted a budget of Command Points and Detachments depending on the size of game you are playing – barring any specific weird and wonderful exceptions that might apply.

At the time of writing, those limits are:

This is a key difference from 8th Edition in that,  instead of gaining Command Points for filling out detachments, you instead use the CP allotments above to purchase detachments for your army.

Depending on what you do, you can sometimes get these CP costs refunded to spend on more detachments (or keep them in your pocket to spend on Stratagems in-game). Players can earn CP via other means as well; for example, battle-forged armies generate 1 CP automatically per battle round. This helps to keep your tactical options open, even later in the game after your initial gambits have played out. 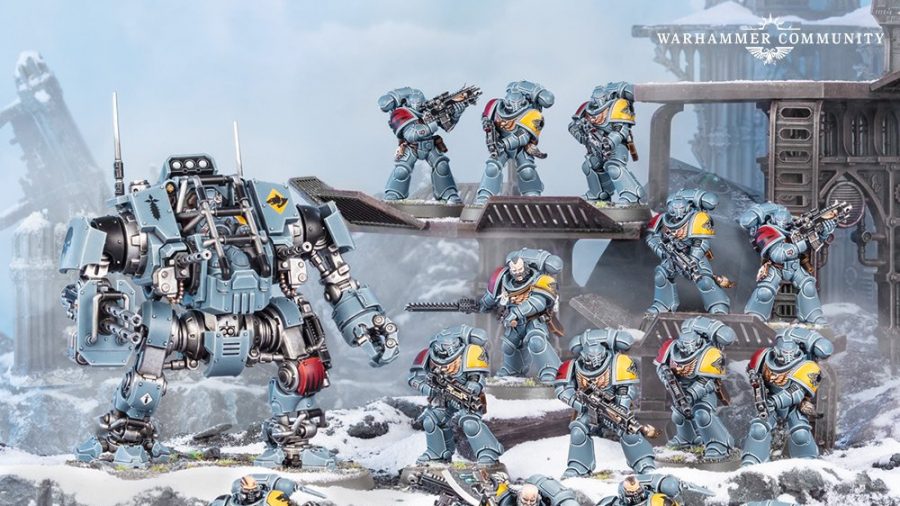 A key thing to remember when building armies for 40K 9th Edition, as in its predecessor, is that some of your units’ rules and abilities may depend on them being part of a Detachment (or sometimes  a whole army) composed entirely of units that share a given keyword in their rules.

All your detachments  must share the same top-level faction keyword – such as [CHAOS] or [IMPERIUM] – to be able to be taken in the same army at all; a detachment of Space Marines can fight alongside a detachment of Sisters of Battle, but they would never make common cause with followers of Chaos.

Easy way in: Our guide on how to play Warhammer 40k

But, beyond that, some units benefit from additional special abilities if they are part of a detachment – or, in some cases, a whole army – made entirely of units with a particular matching keyword, usually the keyword for the sub-faction they belong to.

For example, a battle-forged Space Marine army could contain one detachment of the Ultramarines Chapter and one of Black Templars – but it could not benefit from the Ultramarines special rule ‘Scions of Guilliman’ unless every detachment within the army was fully Ultramarines (or Ultramarines successors). Read the army rules in your codex carefully to make sure all your units and detachments have access to their snazziest abilities right off the bat. These fiddly bits aside, though, let’s get into it: 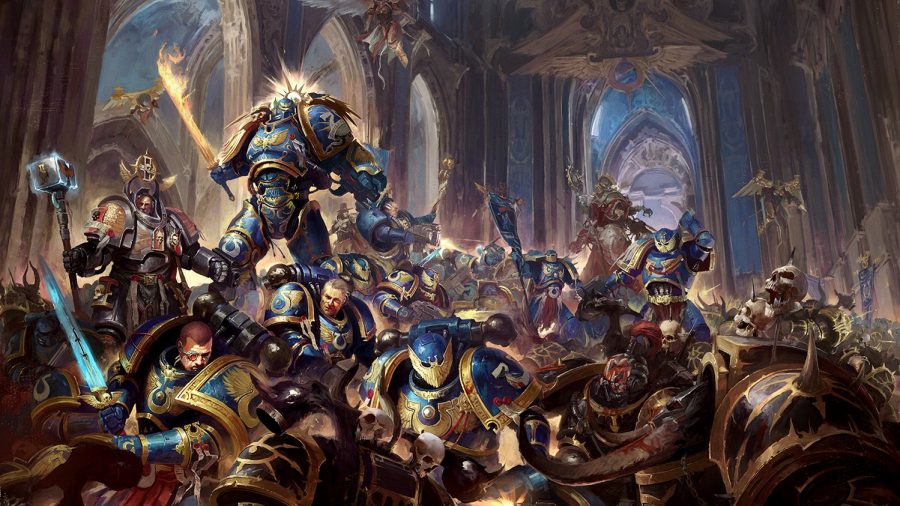 At the time of writing, there are eleven types of detachments available for use when building a Battle-Forged army. You can use the links below to jump to your detachment of choice.

Three of these are considered ‘core’ detachments that serve as the backbone of most armies. These three contain essentially the same balance of unit types, just scaled up for use with larger game formats.

A ‘Patrol’ detachment is fine for the smaller Combat Patrol game type, but if you’re going up to Strike Force or Onslaught matches, you’ll probably want to build your list on one or more Battalion detachments instead – or even the mighty Brigade, if you’ve chosen a troops-heavy ‘horde’ type army like the Astra Militarum. The only real difference is the min-max numbers for units per category.

It’s all in the book: Our 40K 9th edition Codex release date guide

The defining trait of all three is that their CP costs are refunded if your Warlord happens to be in this detachment. This will allow you to use those points on another detachment (if applicable) or for various stratagems or other abilities that require CP to use. 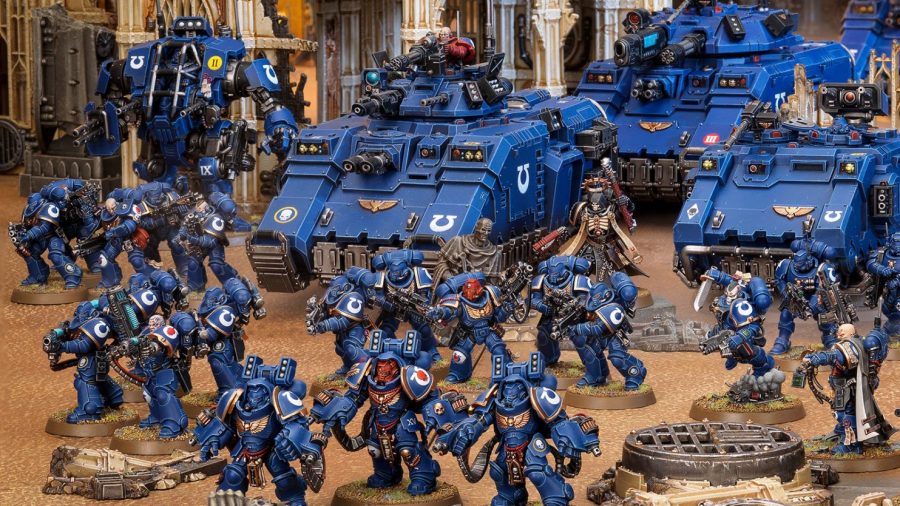 Other than that, they all require that the units within the detachment be from the same faction, they all bar the use of under-strength units, and they all allow for you to take 1 dedicated transport for each ‘infantry’ unit in that detachment.

It’s worth noting that Combat Patrol format specifically requires you to take the ‘Patrol’ detachment as your sole choice. However, Imperial Knights & Chaos Knights can only go in Super-Heavy Detachments. They can still take part in a Combat Patrol according to a foot-note in this article, however.

The most commonly-used detachment in the game and the first building block of maybe 70%+ lists. If you’re not using a Battalion in your army, ask yourself why not.

For use when one of your army’s principal battle strategies is “throw lightly-armed bodies at the enemy until either we win or we run out of bodies”. This technique is so fundamental to the strategic doctrines of the Astra Militarum that it inscribed into the medals of senior – [That’s enough of that now- Ed.] 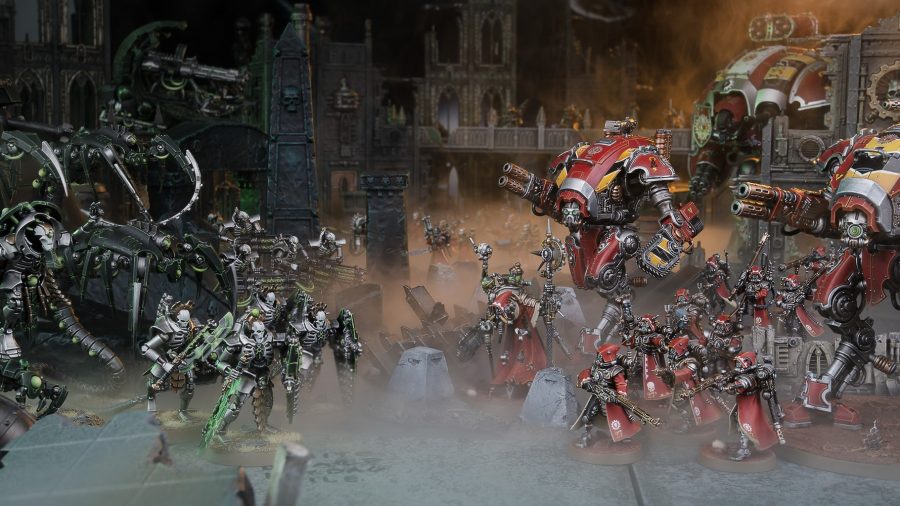 The next three detachments types are a bit more specialist and offer a way to bring more of a specific unit type to your army, themed around a military strategy, whether that be a rapid reaction/strike force (Outrider) or perhaps an elite group of shock troopers (Vanguard).

Like the core detachment types above, units must be all from the same overall faction, and no under-strength units are allowed. You’re also allowed one dedicated transport per infantry unit again.

The key difference is that there’s no CP refund mechanic, regardless of whether your Warlord is present in this detachment or not. It’s not advised you stick your Warlord here, unless you’re wanting to run a specifically themed army.

A commonly-seen army structure is one battalion, supplemented by one of these specialist detachments, depending on the kind of playstyle or strategy the army is aiming for – be it taking and holding objectives with powerful elite troops, pounding enemies to dust with heavy firepower or encircling them with rapid, manoeuvrable assaults.

The one with all the elites – load it up with Terminators, wind it up and watch it smash things.

The one with all the heavy weapons – in 40k there is a saying: “Big guns never tire”. This is where you put your tanks, missile launchers and giant ramshackle scrap-metal energy cannons.

The one with all the fast-movers. Hulking gun-strapped motorcycles, floating jetbikes, green dudes with incredibly unstable-looking jetpacks, shoals of bat-winged alien monstrosities – they all live here. 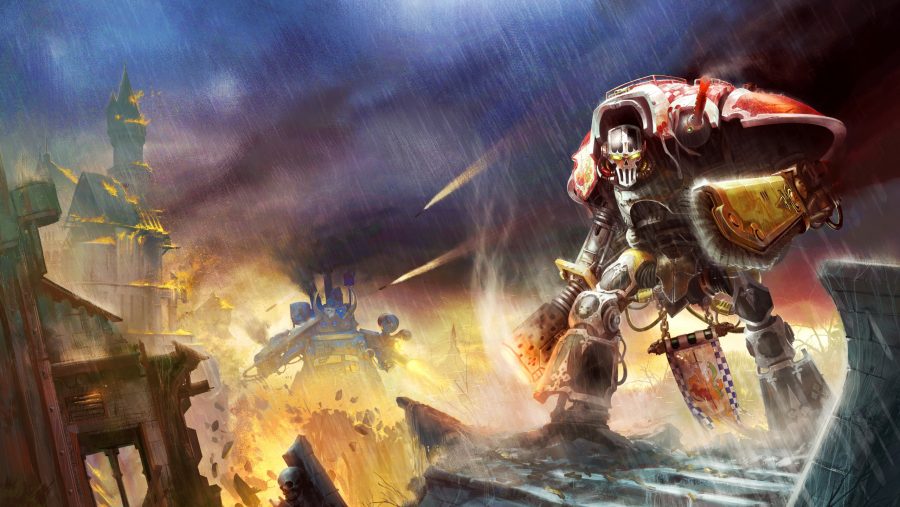 Finally, there are currently five unique detachments that are very bespoke.

There are no unifying traits across these, as they each serve a very specific purpose. For example, if you want to bring some stationary armed buildings as part of your army, they’ll need to be in the Fortification Network Detachment; mighty war engines such as Imperial Knights can only be deployed in a Super-Heavy Detachment, and so on.

It’s worth noting this detachment is essentially only meant to be used if you’re fielding a major named character from your faction, like the Ultramarines’ Primarch Roboute Guilliman, or the newly-returned monarch of the Necrons, Szarekh the Silent King.

This was also in 8th edition, but the rules have been fixed to prevent exploitation. Also note: this detachment doesn’t come with a dedicated transport rule.

Your warlord MUST go in this detachment, but you still essentially get the CP cost refunded of one of your other core detachments, so you’re not losing out. 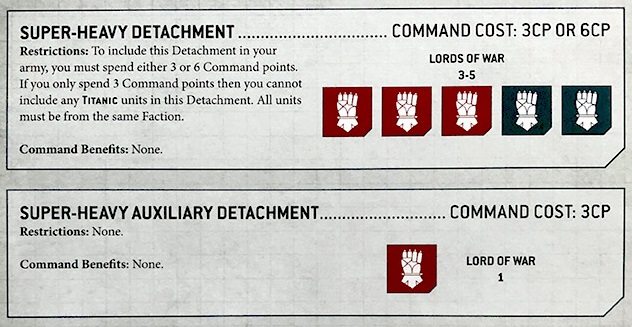 For the big ‘uns. The Super-Heavy Detachment is for building a complete list composed of super-heavy units (such as a Lance of Imperial Knights), while Auxiliary option is there to allow you to ‘ally in’ a single super-heavy unit to assist an army of foot-sloggers.

Fortifications have had their ups and downs through successive editions of 40k, but have never really played a starring role in the game – whether it be the Star Wars-y floating, shielded platforms of the Tau or the suitably ridiculous, vehicle-repairing Mekboy Workshop that the Orks sometimes bring to battle. Still, maybe that’ll change with the Space Marines’ new Hammerfall Bunker. We’ll see.

If you really can’t find a way to fit a critical unit into one of your other detachments – or maybe if you’re at a tournament and have limited models with you to make necessary swaps – you can use the Auxiliary Support Detachment to transplant in an extra unit, at a cost of 2 CP.  Worth avoiding unless absolutely necessary.

That’s (hopefully) everything you’d want to know about detachments in Warhammer 40,000 9th edition. We’ll keep this guide update if any new information comes to light that needs inclusion.