After a choppy 2020 Christmas period, in which Games Workshop’s (GW) planned release schedule was thrown out of whack by the UK’s second nationwide Covid lockdown, the rollout of new army rulebooks for Warhammer 40,000 9th edition is now getting back on track.

These faction books, called Codexes – and the slimmed-down ‘Codex Supplements’ for offshoots such as the Dark Angels Space Marine chapter – contain all the in-game rules, abilities and statistics to update each of the game’s 20-odd playable armies to fit the new 9th Edition ruleset. Players of each of these armies were all bursting to see their favourite faction brought up to date from the moment the new edition was announced in May 2020. But the already-slow release cycle for these rulebooks was further delayed on December 4, when GW put the release of its new Death Guard codex on ice due to “unavoidable delays to crucial shipments”.

Jubilant news, then, that Warhammer 40K codex releases are on the move again in 2021. Of course, Codex: Necrons and Codex: Space Marines were released before Christmas, along with the Codex Supplements for the Blood Angels, Deathwatch and Space Wolves. The long-awaited Death Guard codex went up for pre-order on January 16 and shipped out on January 23. And, on January 24, GW announced the Dark Angels Codex Supplement, which was fully released on February 6.

These are just the first few of many new Codex releases to look forward to this year, and we’ll be keeping this guide up to date with all the latest information as to what’s coming next, and when.

Also worth remembering: on the inside back cover of each of these new Codexes you’ll find a code to unlock the digital version on the Warhammer 40K app. This is likely to become part and parcel of all your 40K games in the future, so, you know – take note.

With that out of the way, here’s everything we know about the upcoming Warhammer 40K codex releases – and the key info on what’s already out. 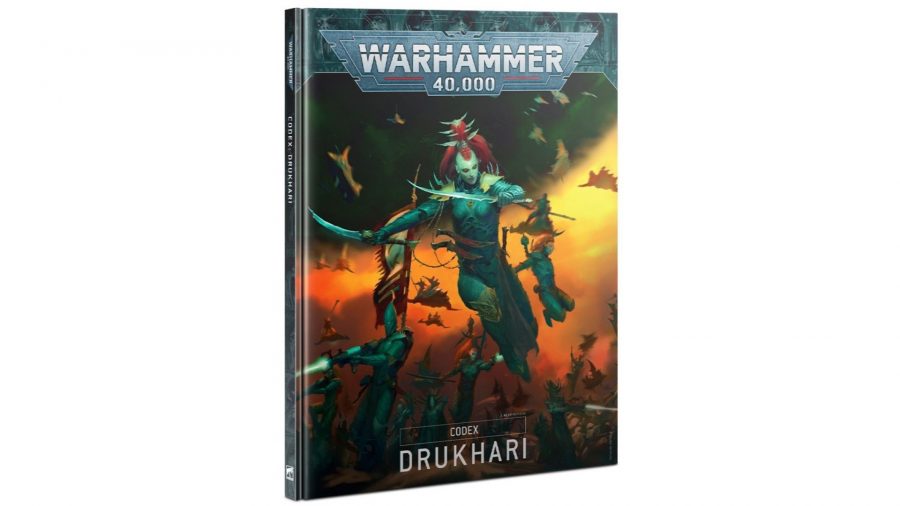 The first Xenos codex release of 2021 has been revealed to be the Drukhari – or ‘Dark Eldar’ if you remember their original, non-copyrightable name.

Especially after a February 8 community update put the Drukhari back in the spotlight, we certainly expect this to be the next codex release, and, as such, the 9th Edition Drukhari codex should arrive midway through February 2021.

The February 8 article revealed a couple of new-rules tidbits, namely:

We’ll get more drip-feeds of rules information in the run-up to the new 9th edition Drukhari codex’s release date.

Their pre-Christmas preview article already said the codex would offer “more attacks, higher damage, and lethal combat output across the board”.

As with the previous releases, GW will likely do its ‘big reveal’ of the new book one week before pre-orders go live on a Saturday evening, with the books hitting shelves (or, more accurately nowadays, doorsteps) the weekend after.

This book will also come with plenty of lore, new & updated datasheets, and Crusade-specific content.

WHICH CODEXES ARE COMING NEXT?

Rumours abound as to which factions will be next on GW’s 9th Edition hit-list, but right now we’re not going to bet the farm on anything. When we know something truly solid – you’ll be the first to hear about it.

WHICH 40K CODEXES ARE OUT NOW? 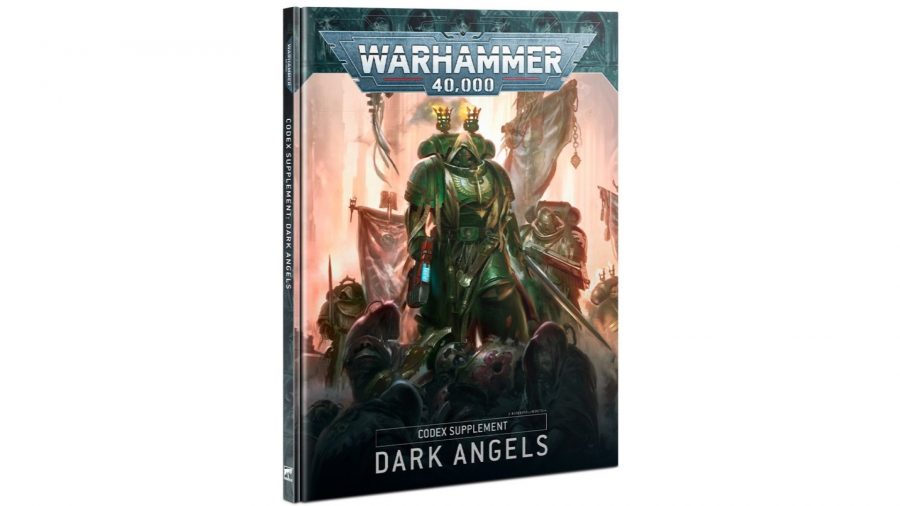 The Dark Angels Codex Supplement went live for pre-order on January 30 and released on February 6 – you can order it right now on the GW site.

The Dark Angels supplement – the fourth such Space Marine chapter supplement to have been announced so far – features “bespoke datasheets, Warlord Traits, Relics, and a Psychic Discipline, as well as a suite of Crusade campaign rules that represent the sombre quest of the Unforgiven”, according to GW.

Alongside their new book, the Dark Angels also got the now-customary set of faction Datacards and – a mite more interestingly – their own Combat Patrol box, joining the Death Guard, Deathwatch, Blood Angels and Space Wolves in GW’s upgraded range of army starter boxes. 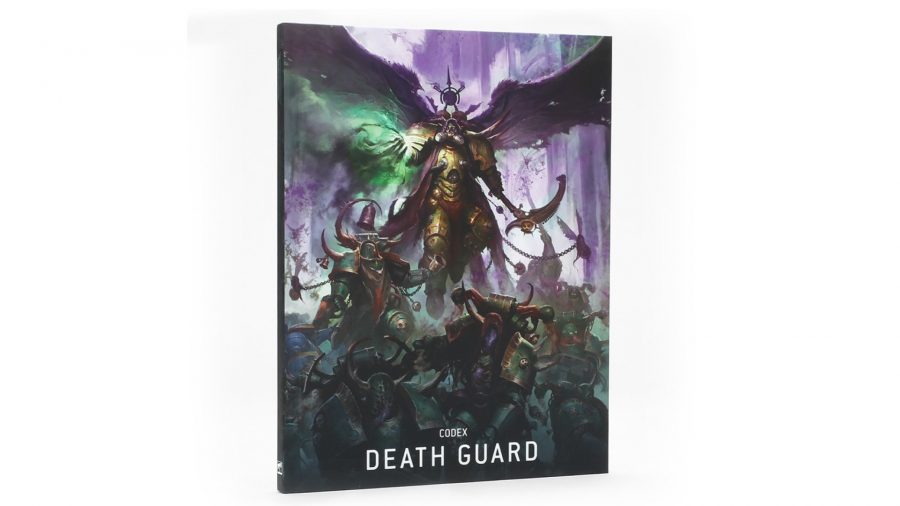 The delayed new Death Guard codex (9th edition’s first rulebook released for a Chaos army)  went up for pre-order on January 16 and was released on January 23.

Like the others, it’s full of army-specific datasheets, rules, and bespoke Crusade content for the Death Guard, the vile, disgustingly resilient sons of the dread Daemon Primarch Mortarion.

Death Guard players had to wait months longer than planned, but when the Codex did come, it came along with some extra goodies – primarily the long-teased and fundamentally foul Lord of Virulence model, and a Death Guard Combat Patrol starter box – the first of its kind for a Chaos army.

It also included some of the most interesting thematic rule-building GW has yet tried with its new Crusade campaign system, in the form of custom-concocted plagues for your Death Guard warband, each affecting nearby enemies in slightly different, yet equally revolting ways and developing in potency over successive games. It’s exceedingly yucky, but brilliant stuff. 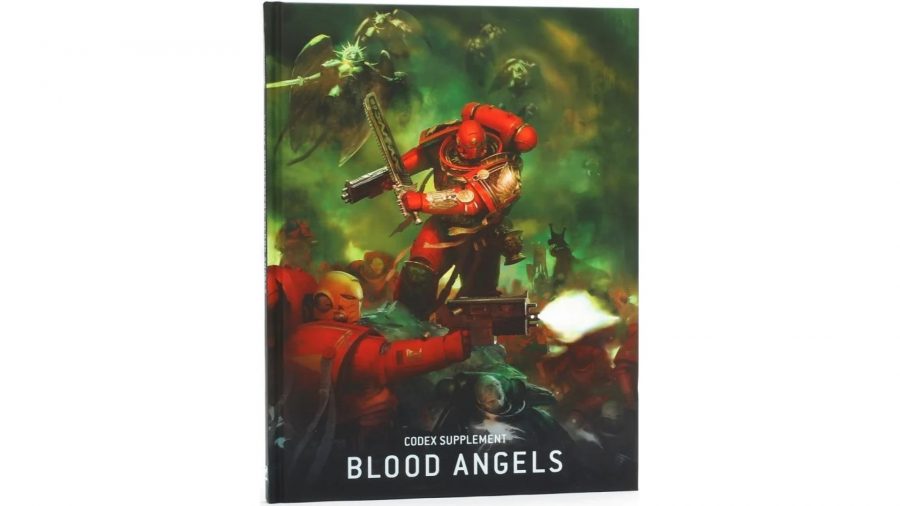 The Blood Angels Codex Supplement was released on December 5, 2020.

The supplement is full of the usual army-specific datasheets, rules, and bespoke Crusade content for the scarlet-clad sons of long-lost Sanguinius, the Angel, along with a good chunk of lore and background information on this popular chapter. 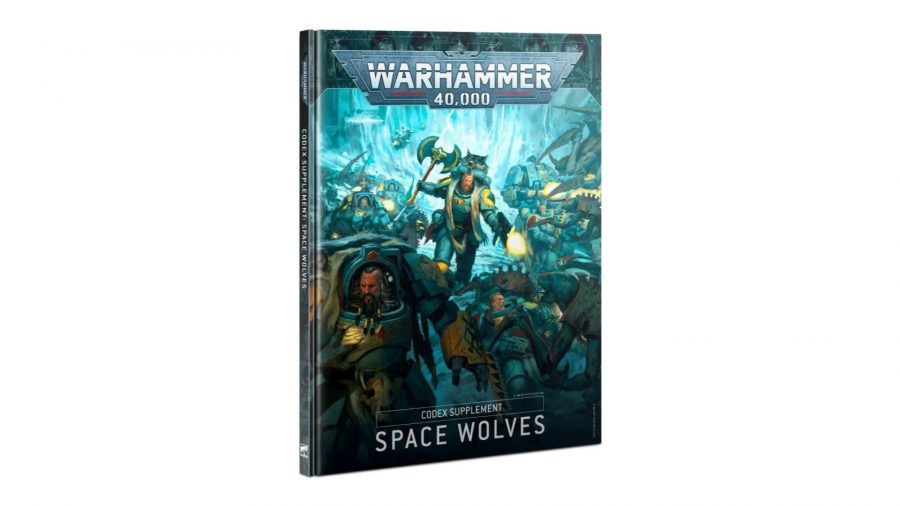 The supplement, like its siblings, provided army-specific datasheets, rules, and bespoke Crusade content for the Space Wolves chapter of Space Marines. It’s 88 pages long, and features additional lore for the Sons of Russ, a bestiary and unique ‘Sagas’ rules to form custom, ever-changing Warlord Traits for your Space Wolves commanders. 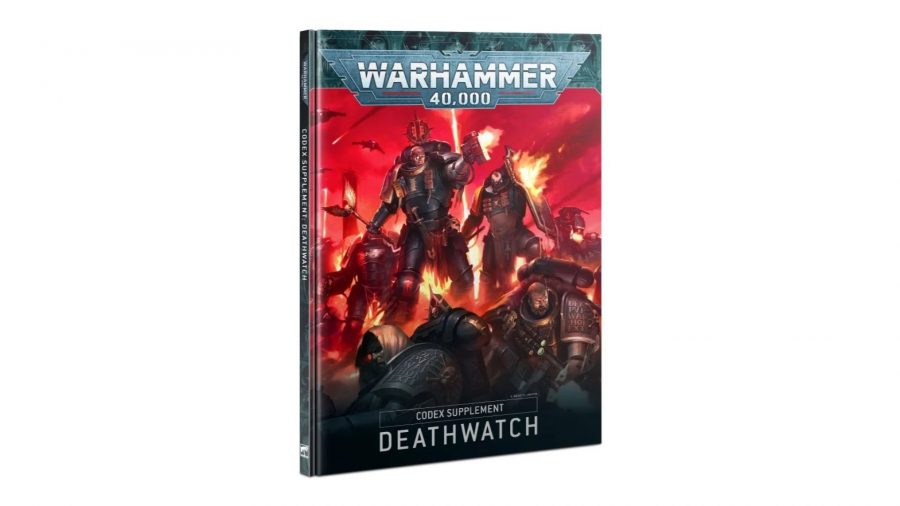 The 9th Edition Deathwatch Codex Supplement was released, along with the Space Wolves, on October 31, 2020.

The Deathwatch supplement includes – you’ve guessed it – army-specific datasheets, rules, and bespoke Crusade content for the elite Chamber Militant of the Ordo Xenos, a.k.a. the silver-shouldered badasses of the Deathwatch.

It is 64 pages long, and includes juicy Deathwatch-specific lore content and special rules on mixing Kill Teams with different specialisations. 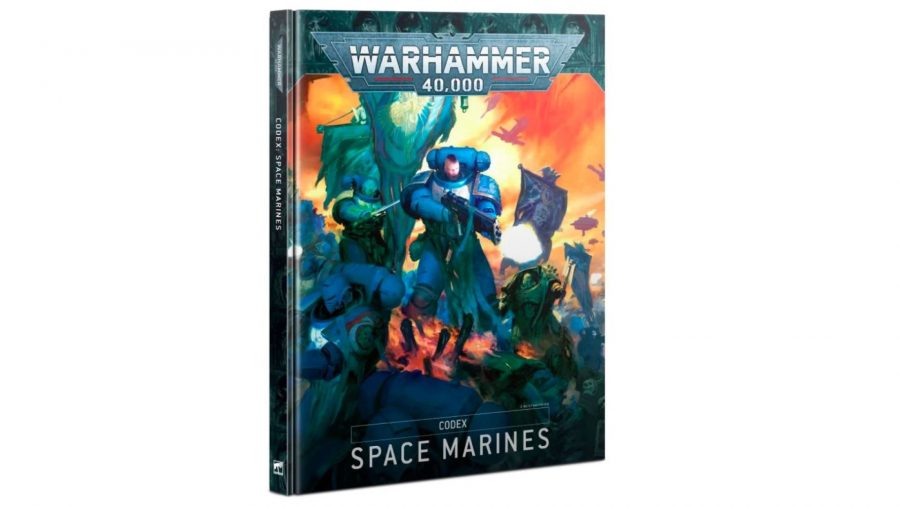 The 9th Edition Codex: Space Marines was released on October 10, 2020, so it’s available now. There is also a special Collector’s Edition available, if you fancy it.

Codex: Space Marines contains heaps of lore for the first-founding chapters, as well as their more prominent successors. It is 208 pages in length, with 98 datasheets for new and existing units.

Space Marines were always going to be the longest book, with their 8,000,000 different units and bountiful sub-faction rules – but the 9th Edition codex is a seriously chonky tome, incorporating a whole raft of new rules from the Psychic Awakening series and the Adeptus Astartes’ own new Crusade rules. 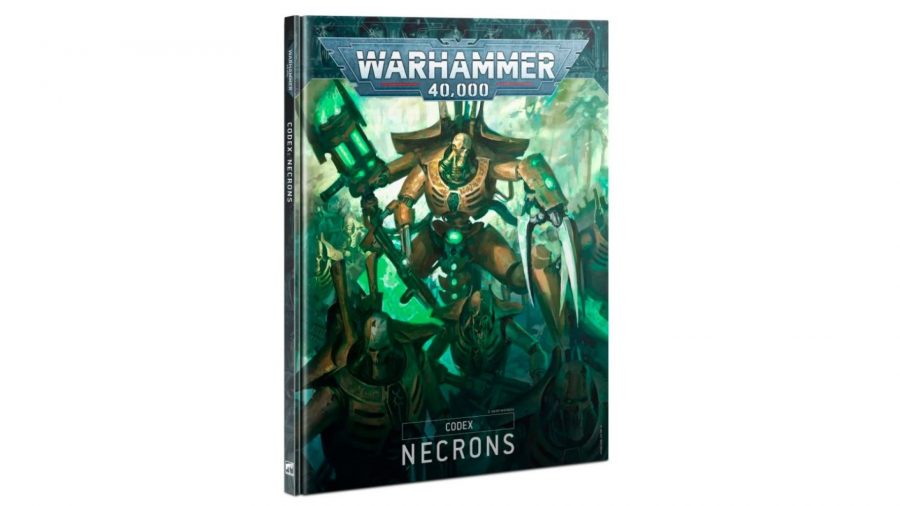 The 9th Edition Codex: Necrons also launched on October 10, 2020 and is available now – with the option of a snazzy Collector’s Edition, too.

This is a smaller book than the Space Marines release, clocking in at only 120 pages. It’s still packed with new lore and, in general, represents a colossal and very exciting overhaul of how the Necron army works in battle.

There are 51 datasheets, including Szarekh, the Silent King

There are 51 datasheets, including rules for the magnificent new Szarekh, the Silent King model, as well as the Necrons’ numerous other glorious new models, all their new army rules, Crusade content and other nuts and bolts.

We’ll have more details in upcoming guides but, for now, you should get hyped about the Necrons’ new ‘Command Protocols’ mechanic. It’s a stone-cold brilliant addition to Necron army-building, which, alongside the newly fleshed-out Dynasty abilities, will add a touch of unpredictability to the round-by-round flow of a battle. 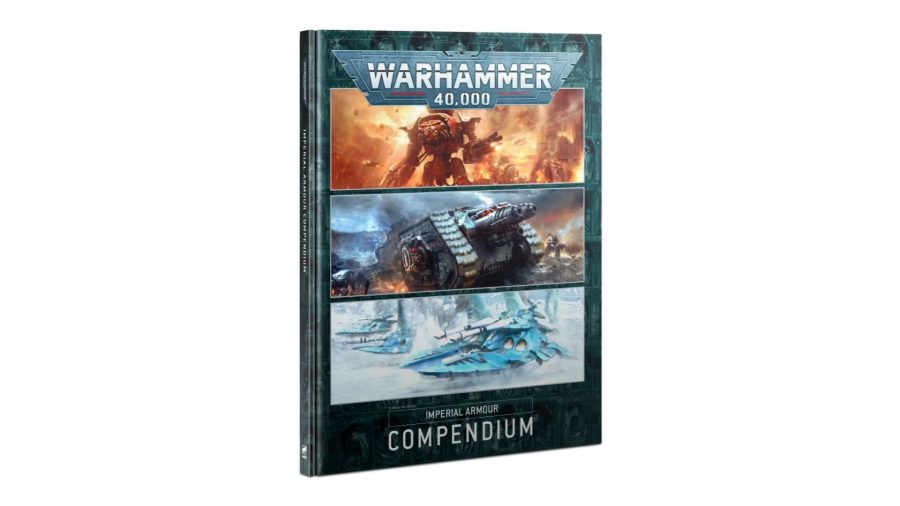 The 9th Edition Imperial Armour Compendium was released on October 30, 2020.

This was a stand-alone book release from GW’s specialist sister store, Forge World, to bring in-line a number of their special/limited edition miniatures with 9th Edition.

It’s got 233 updated datasheets for the Forge World models playable in Warhammer 40,000. It also includes a Regimental Doctrine for the Death Korps of Krieg and suggested Successor Tactics for five renowned Space Marine chapters that are too edgy to live in the main book.

As a side-note, GW has said that any model that does currently exist, but doesn’t have an entry in this book, will later be receiving a Warhammer Legends update at some point.

WHICH 40K CODEXES ARE WE STILL WAITING FOR?

Assuming all the same factions who got a full codex in 8th edition get one again this time around, the upcoming 40K Codexes we can expect to be revealed – but don’t have any info yet to mention above – are:

At the time of writing, no further Codexes or Codex Supplements have been announced, however since you’re here you might be interested in knowing that two further narrative books are coming:

War Zone Charadon Act 1: The Book of Rust – a campaign book that will also include new rules for the Death Guard, Adeptus Mechanicus, Imperial Knights, and Drukhari.

Plague Purge Mission Pack – similar to Beyond the Veil, this offers bespoke Crusades content in the form of background lore and new missions for the Charadon war zone.

Rest assured: we’ll keep this guide updated with all the latest information on Warhammer 40K 9th edition codex release dates, so you’ll know exactly when your army is getting its shiny new rules, abilities and lore.