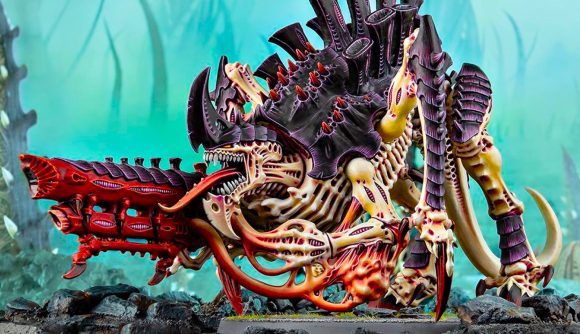 The new Warhammer 40k Tyranids codex is busy beefing up The Hive Mind, it seems. After announcing the upgraded version of Tyranid fleshborers on March 22, Games Workshop has turned its attention to the big guns. GW’s Warhammer Community site calls the Tyrannofex’s rupture cannon “one of the largest living weapons deployed to the battlefield”, and it’s this gargantuan goo-shooter that’s getting the next rules update.

As announced in a WarCom article on Wednesday, while the 48″ range and type (Heavy 3) of the rupture cannon remain the same in the new Tyranids codex, the new-and-improved version will have an extra 4 points of Strength, jumping from S10 to S14. It’s also getting an extra pip of Armour Penetration (AP) , from AP-3 to AP-4, and – terrifyingly – an additional flat 4 Damage, on top of the D6 it dealt before.

WarCom says the fleshborer hive and heavy venom cannon weapons are also receiving buffs in the codex. The fleshborer hive’s Strength and Damage remain the same, but it transforms in all other areas – going from Heavy 20 to Assault 30 (meaning you can now fire it after Advancing); extending its range by 6” (taking it up to 24”); and stepping up to AP-1 from AP0. Get ready to roll a lot of dice with this thing.

Meanwhile, the three-shot heavy venom cannon changes from Assault weapon to Heavy weapon, and loses the anti-horde Blast ability – but makes up for it by improving its AP from -2 to -3, and its Damage from flat 3 to flat 4.

Our Warhammer 40k Tyranids guide includes everything you need to know to raise your army before the next codex releases. You can also catch up on your codexes in this 40k codex release date guide.