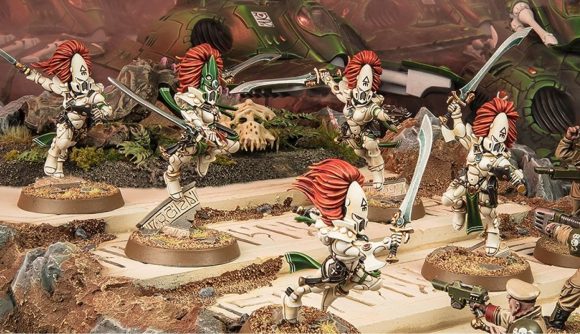 Games Workshop has previewed new rules from the upcoming Warhammer 40K Aeldari codex, and the Eldar’s noisiest Aspect Warriors, the Howling Banshees, are getting new abilities that make them a cut above in melee once again. Shown off in a Warhammer Community article on Wednesday, GW says the Banshee Mask, Whirling Death, and Acrobatic rules are meant to help the Howling Banshees do their favourite thing of charging in and chopping their foes into tiny little plastic pieces.

The most unique ability shown involves the Howling Banshee’s horrible psychic masks. The new rules mean these psycho-sonically amplified helms can addle an enemy unit’s mind when it’s targeted with a charge – turning off Overwatch or Set to Defend, and preventing all foes within engagement range from fighting till the end of the turn. This happens even if your charge fails, so there might be an edge case where you use the Banshees to help your other units pile on in. Oh, and you can also pop one on your Autarch HQ unit, if you want.

Ensuring the Howling Banshees can close the distance, Acrobatic lets them advance and then charge (while also making them harder to hit, with -1 to all attack rolls made against them). Finally, Whirling Death pretty much does what it says on the tin, granting +1 to wound rolls on melee attacks made after a charge.

Warhammer Community showed powerful new rules for many of the other Aspect Warriors on Tuesday too, including boosts to the Fire Dragons’ weaponry that’ll let them punch big ol’ holes in any vehicle (or Tyranid bio-monster) unfortunate enough to square up against them. A choice upgrade was their Aspect Armour, providing a 5+ invulnerable save. The Howling Banshees get this too, which should increase their survivability a smidgen. 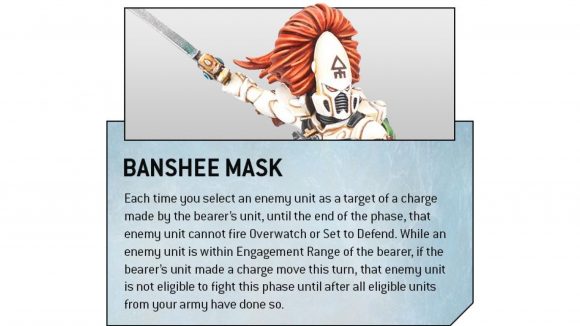 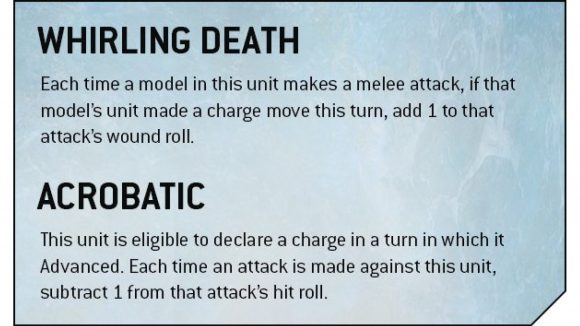 Howling Banshees have always been a popular unit for their look and their lore, but they’ve lately lacked the oomph to be truly viable on the tabletop. These new rules might be just the shot in the arm they needed. We’ll know for sure when the new Aeldari codex finally drops. It’s surely just around the corner now.

If you want to brush up on your Aeldari lore before the codex cometh, then here’s our Craftworlds Eldar 9th edition guide. And if you want to know when you’ll be able to pore over all those new sweet, sweet rules, keep an eye on our Codex release date guide – we’ll keep it updated with the very latest information.