Warhammer 40k‘s Grey Knights are the shiniest silver-armoured Space Marines in the far-future Imperium of Man – but who actually are these mysterious, lightning-wreathed ‘Knights of Titan’? Who are the secretive denizens of ‘Chapter 666’, of whom nobody across the galaxy is allowed to learn, and live? Read on, and you’ll find out – not to mention get a grounding on how the tabletop army plays.

The Grey Knights have been around in Warhammer 40k since its very first edition, Rogue Trader, released in 1987 – though, at that time, they were simply listed along many other chapters of Space Marines, with the sole differentiation that they happened to specialise in hunting daemons.

The first standalone Grey Knights codex came along in Warhammer 40k 5th edition in 2011, however, and by that time these silvery fellows had a lot more lore to their name (not to mention some models). Skip ahead to 2022, and the Grey Knights are coming back to the fore, starring in their own Warhammer  40k videogame, Chaos Gate: Daemonhunters. But we’re getting ahead of ourselves.

Here’s what you need to know about the Grey Knights in Warhammer 40,000: 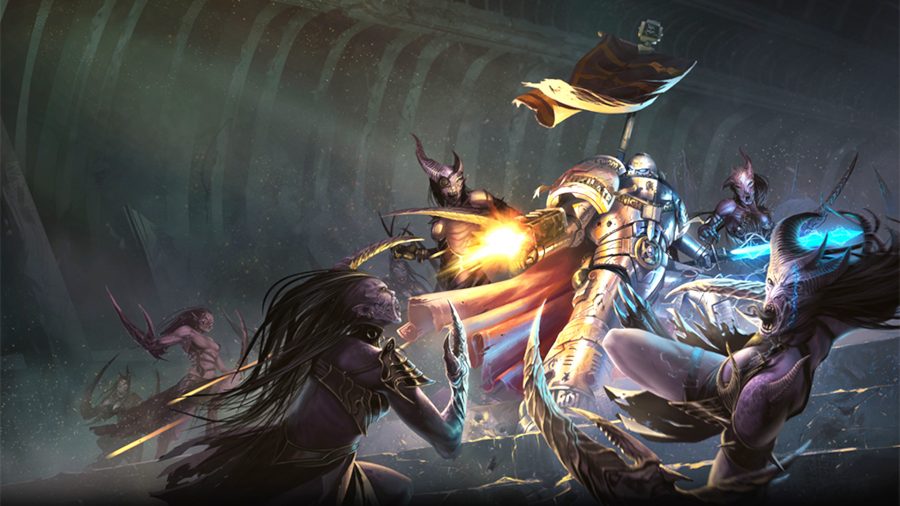 Who are Warhammer 40k’s Grey Knights?

Warhammer 40k’s Grey Knights are a secretive, esoteric chapter of specially engineered, psychically active Space Marines, created by the Imperium to be its greatest weapon against the daemons of chaos.

The Knights of Titan seek and destroy chaos daemon incursions

Based in a vast, but psychically hidden fortress monastery on Titan (the largest of Saturn’s 83 moons), it’s their mission to combat warp incursions, seeking and destroying chaos daemons wherever they assail Imperial worlds. They’re also tasked with securing all daemonic relics and warp-tainted artefacts within the ‘Chambers of Purity’ deep within Titan, to protect the rest of the Imperium from their warping influence.

They are, technically, the ‘Chamber Militant’ (military arm) of the Imperial Inquisition’s order of daemonhunters – the Ordo Malleus – meaning the Grey Knights’ assistance can be called upon (or commanded) by Ordo Malleus Inquisitors when required. However, these relations are often fraught, with the Knights keen to assert their independence from the dictates of the Inquisition. 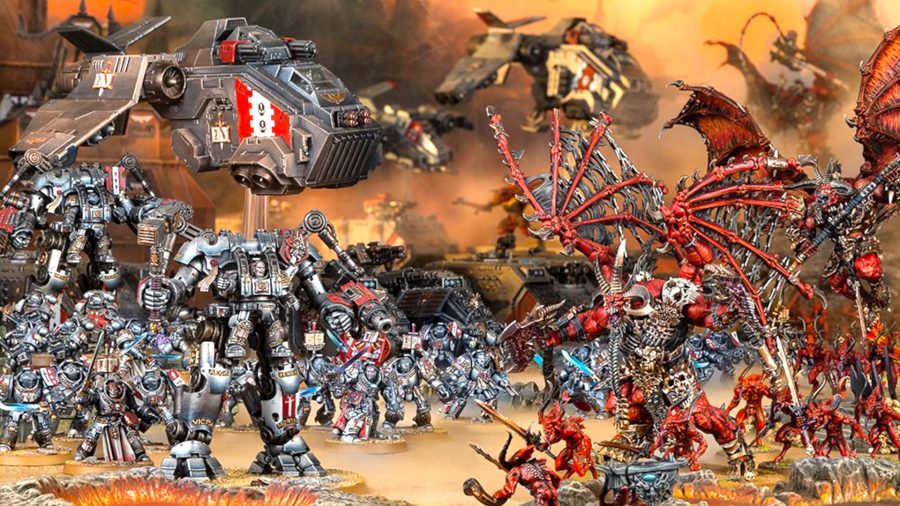 The chapter, its mission, and its methods were conceived of by the Emperor and Malcador the Sigillite – his closest human confidant, and a powerful psyker –  during the closing stages of the Horus Heresy.

Convinced that, even if the Imperium survived Horus’ uprising, its future would be beset by endless threats from Chaos and its warp-spawned minions, the Emperor sent Malcador to search the Heresy’s many battlefields for the truest, most loyal and mentally strong Adeptus Astartes and human imperial servants alike.

Psychic rivals: Our guide to the Warhammer 40k Thousand Sons

He brought back eight Space Marines, and four humans. The humans became the founders of the Inquisition – and, under Malcador’s tutelage, the eight marines became the first Grand Masters of the Grey Knights. 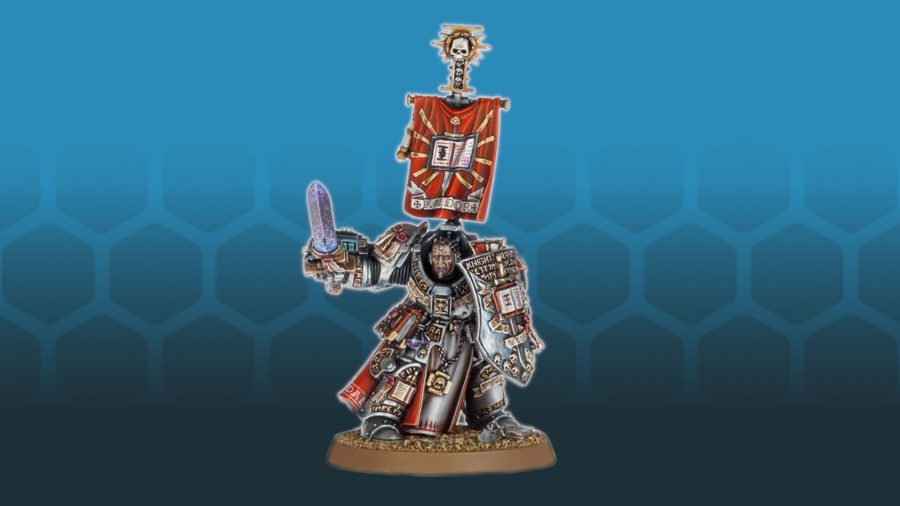 Kaldor Draigo is the formal chapter master (or, in their terms, Supreme Grand Master) of the Grey Knights chapter of Space Marines. However, according to the latest codex, his “place of honour” at the Grand Masters’ high table on Titan is always empty.

Draigo is a beast on the tabletop

Dragged into the warp in a fateful duel with a greater daemon named M’kar, Draigo had been thought lost forever. But, for reasons unknown, he was able to survive, timelessly travelling the warp battling daemons – except for a few specific occasions when, by warp ritual or happenstance of history, he gets pulled back into real space to fight alongside the Grey Knights again. When the battle’s done, however, he inevitably drifts back into the warp to journey on.

On the tabletop – there’s no two ways about it – Kaldor Draigo is one of the most powerful combat character units in Warhammer 40k. He’s a staple of many Grey Knights lists for a reason: on the turn he charges into combat, he gets seven attacks with The Titansword, at Strength 8, AP -4, Damage 3.  Pair that damage potential with a 2+ armour save and an incredible 3+ invulnerable save from his relic shield, and Draigo is, unarguably, quite a beast. 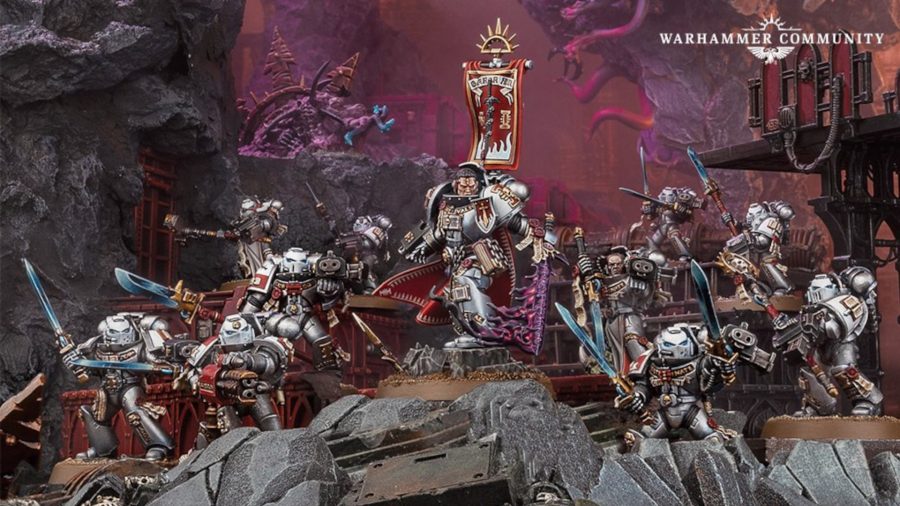 Castellan Crowe (first name Garran) is Champion of the Order of Purifiers – the zealous, puritanical sect of Grey Knights tasked with protecting and containing daemonic relics – and perhaps the most famous hero among the senior ranks of the Grey Knights space marines.

He wields a daemon-sword titled the Black Blade of Antwyr, whose daemonic aura is so virulently powerful that the Grey Knights can neither destroy it, nor safely entomb it in Titan’s Chambers of Purity. Thus the purest, most incorruptible Grey Knight, the senior Purifier – currently Castellan Crowe – must always bear the sword, to keep its warp-taint contained.

On the tabletop, Crowe and his Black Blade are pretty tasty too – with seven attacks on the charge; hitting on twos; Strength 5, AP -3, Damage 2; and – crucially – dishing out an extra D3 Mortal Wounds for every six you roll to wound. On top of that, Crowe fights first in the Fight Phase thanks to Martial Superiority; and – thanks to Heroic Sacrifice – can fight one last time even after he’s struck down in close combat.

Games Workshop released a new, plastic character model for Castellan Crowe as part of the Grey Knights versus Thousand Sons ‘battle box’ Hexfire in September 2021, which many fans suspected was proof Crowe is now a Primaris Space Marine – but GW has neither confirmed nor denied this. 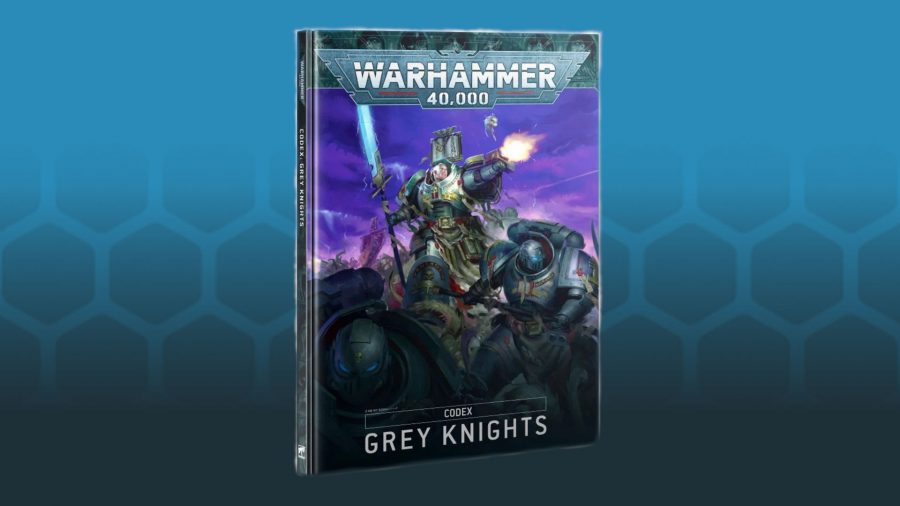 As per the standard for codex books in 9th edition Warhammer 40k, it contains:

The 9th edition Grey Knights codex was generally well received, as a natural refinement of the ‘reboot’ update the army received to its previous codex in the dying months of 8th edition. 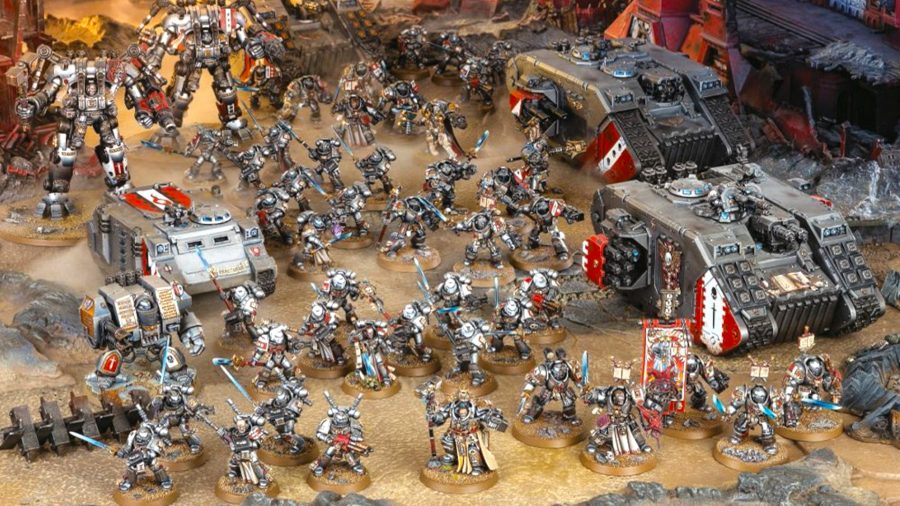 Retained, and slightly expanded, from 8th edition is Grey Knights’ pure army-wide ability, Masters of the Warp. This has you pick one, psychically switchable, ‘Tides of the Warp’ buff to apply to all your units at any one time. 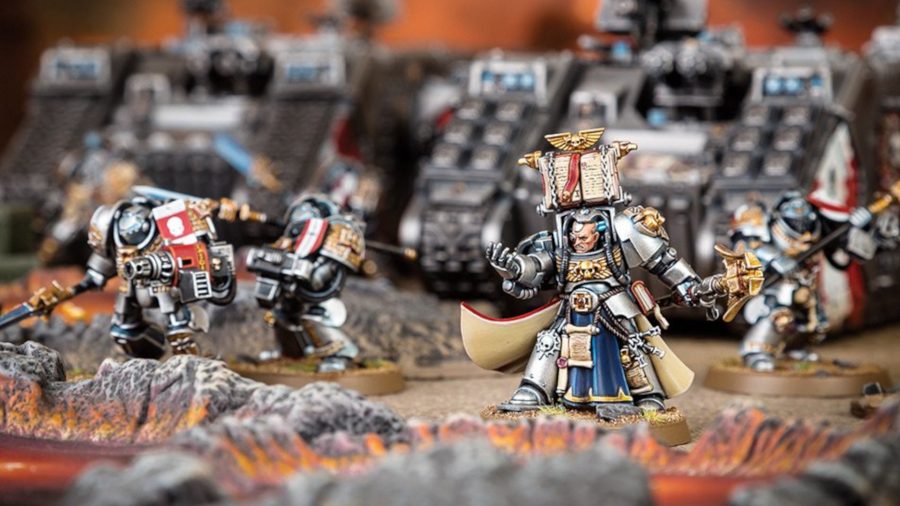 The major changes in the 9th edition Grey Knights codex were: 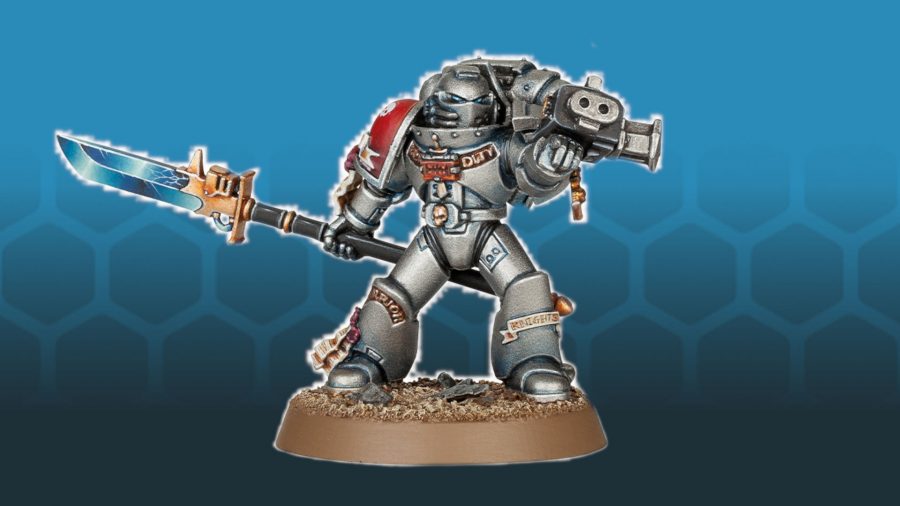 Grey Knights Strike Squad marines form the backbone of every Grey Knights fighting force, from entire Brotherhoods down to select Strike Forces of a handful of hand-picked battle brothers.

Armed, as standard, with a wrist-mounted Storm Bolter and a Nemesis Force Sword – both of which any battle-line Grey Knight can imbue with additional psychic power to make every hit land like an artillery shell – each Strike Marine also has his own personal symbology, heraldry, and custom wargear.

Depending on their skills, preferences, and the task at hand, space marines deploying in a Grey Knights Strike Squad might swap out their Storm Bolter for psychically-boosted heavy weapons like Psycannons, Psilencers, and Incinerators.

Likewise, for close combat, the Nemesis Force Sword can give way to a Nemesis Force Halberd, Nemesis Daemon Hammer, Nemesis Warding Stave, or pair of Nemesis Falchions, to best suit the mission. 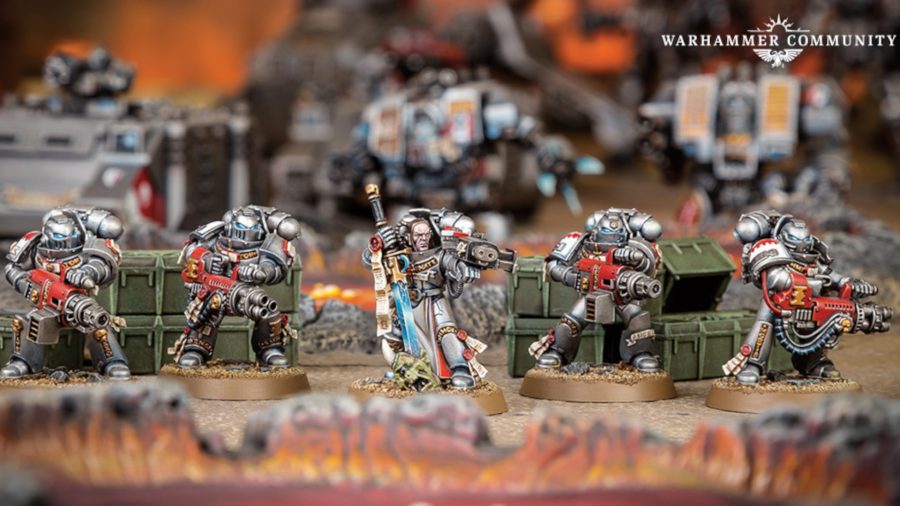 On the Warhammer 40k tabletop, five- or ten-strong Grey Knights strike squads are your bread and butter troops units – used for swiftly taking and holding objectives, and taking on smaller enemies with their melee and psychic weaponry.

For more specialised battlefield roles, Strike Squad marines can be reorganised and re-equipped as three other unit types (all of which can be built from the standard GW Strike Squad model kit). These are: 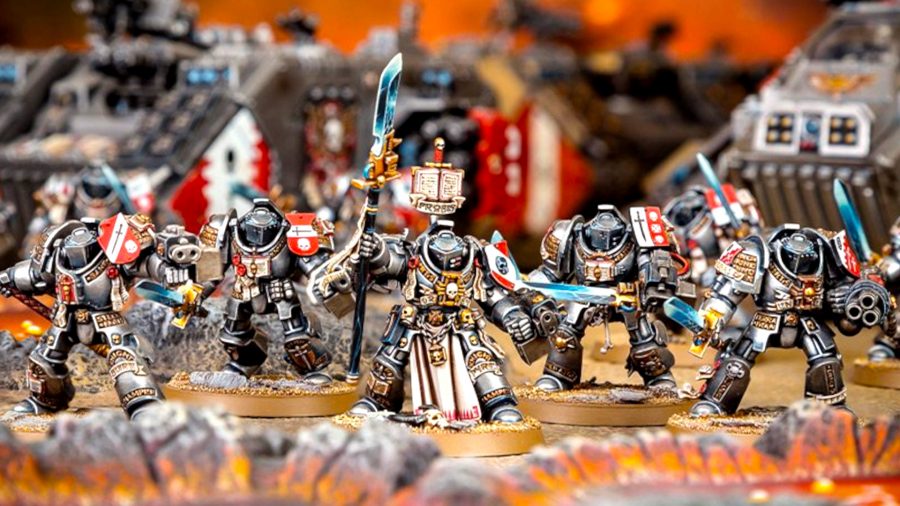 Grey Knights are almost unique among Space Marine armies, in that they are so spectacularly well equipped with advanced wargear that Terminator-armoured marines play the role of standard battleline troops units (as opposed to rarefied, specialised elite squads, as in most chapters).

For the Grey Knights, Terminators are basic Troops

The main difference between Grey Knights Terminators and Strike Squad marines (other than getting a 2+ armour save and a 5+ invulnerable save, compared to the strike marine’s basic 3+ power armour save) is that terminators can carry both a heavy gun and a melee weapon – rather than either/or.

As per other Space Marine Terminators, these also have the Teleport Strike ability, allowing them to deploy as reinforcements, mid-game, anywhere on the battlefield more than nine inches from an enemy. 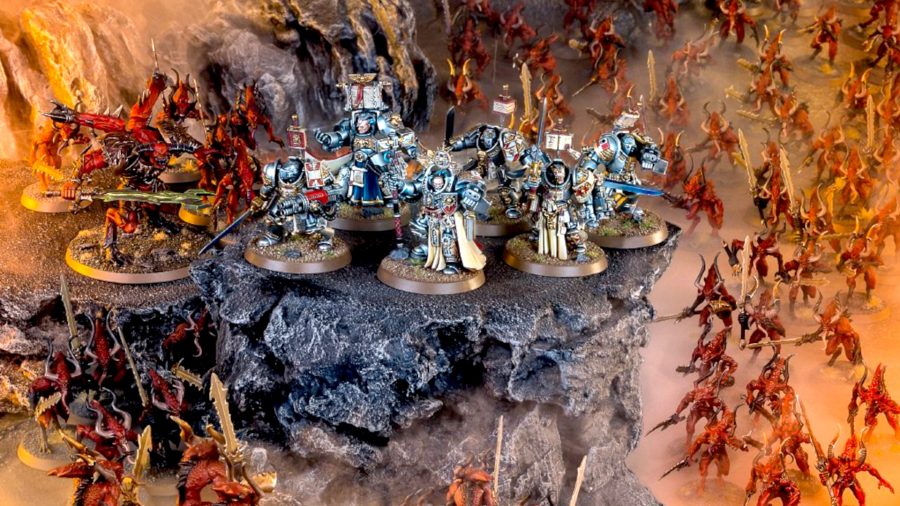 The 666th chapter’s most elite heavy infantry, Grey Knights Paladins are made up of  the most senior, battle-hardened veterans in each Brotherhood. Their highly decorated Terminator plate bears heraldry, honours, and keepsakes of their great feats and glories – for each one of them has slain a greater daemon (or more).

On the tabletop, the Paladins represent upgraded versions of the Grey Knights Terminators; they get one extra attack, an extra pip of Leadership, and a Weapons Skill of 2+ instead of 3+. They can also take more heavy weapons per squad; two Paladins in every five can carry a Psycannon, Psilencer, or Incinerator, compared to one in five for the Terminators. 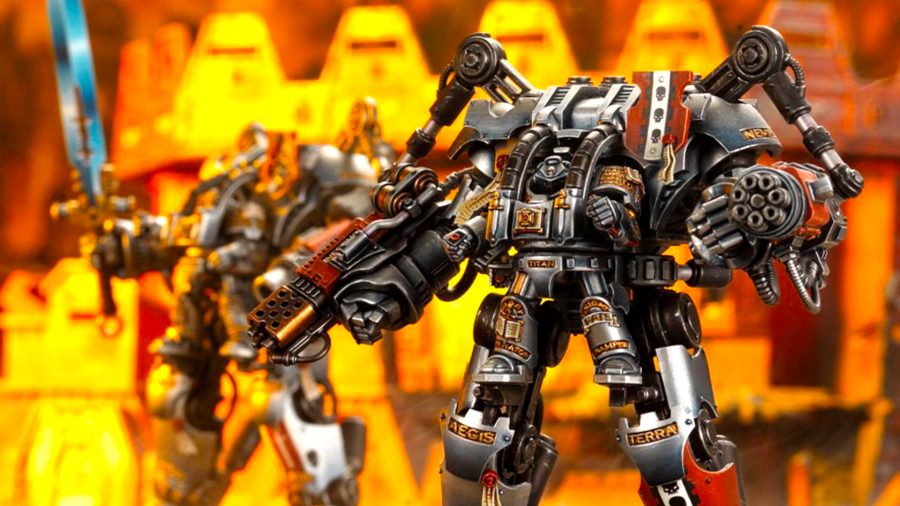 As iconic as it is, er, ‘divisive’ within the Warhammer 40k fan community, the Grey Knights’ Nemesis Dreadknight is probably the most distinctive and recognisable model in their army roster.

Comparable to a Space Marine Dreadnought in terms of size, design, and battlefield role, the Dreadknight is a massive, mechanised walker that uses mighty, upsized versions of the Grey Knights’ heavy guns and melee weapons, able to dish out enough damage to take out an Imperial Knight.

The main difference, however, is that – while Dreadnoughts are controlled by devastated, near-dead husks of felled marines, contained in sarcophagi – Dreadknights function as exoskeletal warsuits, piloted by living marines. The pilot stands in a psychically-shielded harness on the machine’s front, giving rise to the model’s affectionate nickname “baby carrier”.

You’re also able to field a Grandmaster in Nemesis Dreadknight – an upgraded version of the unit piloted by the leader of a Grey Knights Brotherhood – a highly powerful and competitively popular tabletop HQ choice. 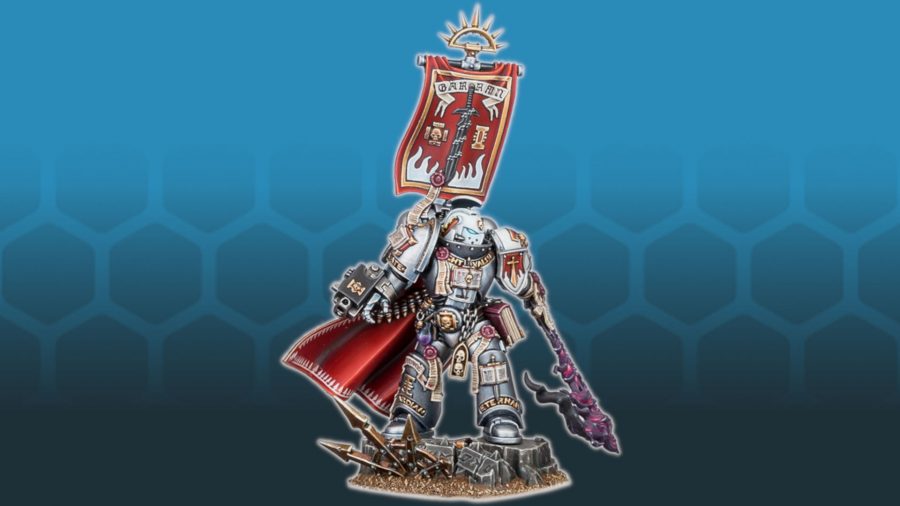 There are no Primaris Grey Knights – or are there? When GW released the new, plastic Castellan Crowe character model for the Grey Knights in 2021, many fans took the daemon-sword-wielding hero’s taller stature to mean he had crossed the Rubicon Primaris, and become the Knights of Titan’s first Primaris Space Marine.

This would be a major development in Warhammer 40k lore; after all, the Grey Knights are not created by the same method as ordinary rank-and-file Adeptus Astartes neophytes of any other chapter. Instead of coming from the genetic blueprint of one of the Primarchs, they’re imbued with specially engineered geneseed developed directly from the genome of the Emperor – making each marine vastly more powerful and valuable. Opening the door to Primaris Grey Knights would make for some seriously dangerous dudes.

Alas, for now, Games Workshop has neither confirmed nor denied that the new Castellan Crowe is a Primaris Space Marine – much less given any indication that more Grey Knights could be converted. On the upside, it leaves the possibility open for Primaris Grey Knights to be developed later on (both in narrative and plastic miniature form). We shall wait and see. 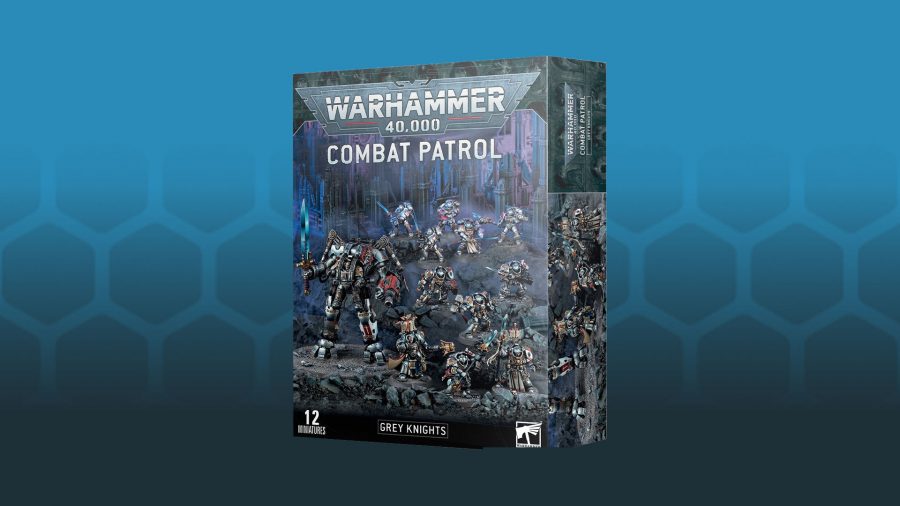