Warhammer 40k’s Greenskins are getting spruced up in the upcoming ninth edition Orks codex, and everyone’s favourite onomatopoeic, bullet-blazing ability hasn’t been forgotten. No longer merely a faction ability that grants extra shots, Dakka has been reworked as an entirely new weapon type to replicate the sheer volume of lead fired from Ork guns, according to a Warhammer Community article posted earlier today.

The new Dakka weapons have two separate attack values, which come into play based on your Orks’ proximity to their target. Get your units within half their maximum gun range, and they’ll be able to fire more shots. The idea is for players to gamble on the extra firepower at the cost of a close-combat bruising, while thematically mimicking Orks’ penchant for brutal scraps in frenzied bullet hells.

Dakka weapons aren’t in short supply, either. The Ork Boyz’ staple shoota will switch from Assault 2 to Dakka 3/2 (meaning they’ll retain their two shots, but be given an extra bullet to sling when within half range), while the big shoota will move up from Assault 3 to Dakka 5/3.

Meanwhile, Prophet of the Waaagh! Ghazghkull will have his Mork’s Roar attack boosted from Assault 12 to Dakka 16/12, and the Gorkanaut’s mega-shoota is to be upgraded from Heavy 18 to a colossal Dakka 30/12.

The Warhammer Community post also revealed some broader weapon improvements, including the switch of Rokkit Launcha’s from Assault 1 to Heavy d3, and Rokkit Kannon’s from Assault 2d3 to Heavy 3d3, granting them both extra shots. They’ll also be receiving the Blast keyword ability that ups the number of attacks made when targetting large groups.

Currently, the Orks’ Dakka! Dakka! Dakk! ability lets them sling a few extra shots whenever you roll a six to hit, balancing their inaccuracy with a high rate of fire. This change of Dakka to a weapon type looks to more obviously imitate the Orks’ shoot-everything-in-every-direction style of fighting, and will likely come as welcome relief to Ork players tired of their boyz’ subpar, random bullet firing. 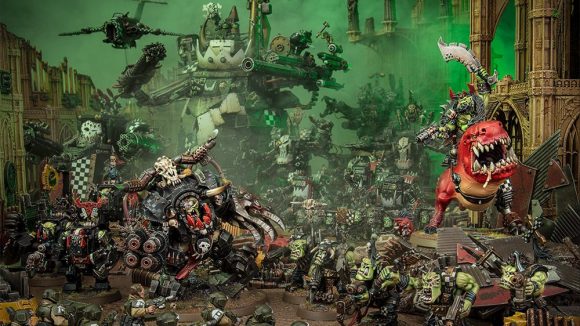 The first and fastest way of getting your hands on the upcoming 9th edition Orks codex is to grab the new Beast Snagga Army Set, which introduces the book alongside the Greenskins’ latest squig-obsessed faction. The Beast Snagga box goes up for pre-order this weekend, and includes 26 new Ork minis.

The Orks codex will also release separately later this year, although we’re still waiting on an exact date.

Until then, why not brush up on your Greenskin knowledge with our Warhammer 40k Xenos factions guide, and do right by Mork and Gork.