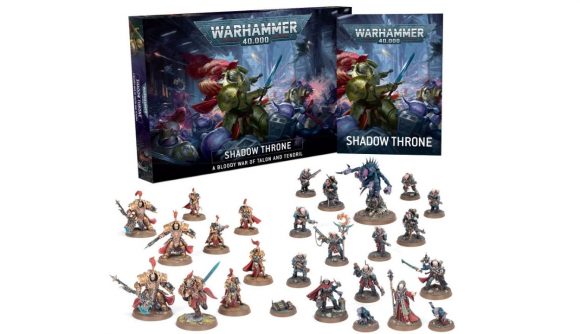 What better way to embrace the festive season than by donning the shimmering power armour of the Adeptus Custodes and tearing your way through ranks of xenos. Or, if mutant appendages are more in line with your understanding of holiday cheer, spread the malignant tendrils of the Genestealer Cults. Either way, Wargamer is giving away a copy of the latest Warhammer 40k battle box – Shadow Throne – so you can live out your grimdark fantasies this winter.

The box pits the Emperor of Mankind’s elite bodyguard against the Tyranid-worshipping mutants on the surface of Holy Terra itself. Inside you’ll find nine miniatures for the Adeptus Custodes – three Allarus Custodians, five Witchseekers, and the brand spanking new Blade Champion – alongside 16 minis of the Genestealer Cults – a Patriarch, a Magus, one Primus, two Familiars, and ten Neophyte Hybrids, plus the debut of the Reductus Saboteur.

An excellent starting force for either army, the box also pairs nicely with the armies’ new Warhammer 40k 9th edition codexes that are scheduled to release early next year. Originally, Shadow Throne was sent to us by GW to review, but, in the true spirit of hobby Christmas, Games Workshop has given us permission to give it away to one of you lucky folks.

Make sure to get your entries in before the giveaway closes at 6pm GMT / 1pm ET on Sunday, December 19. Complete any and all of the actions in the widget below to enter, add your details, and you’ll be good to go. If your name is chosen as the lucky winner, we’ll contact you to send Shadow Throne your way!

Already have a Custodes army fully painted? Or will you soon be starting your allegiance to the Imperium? Either way, don’t miss out on this fabulous box.

What’s more, this is just the second of a series of Wargamer holiday giveaways throughout December (and maybe beyond, if you’ve all been good children – it’s coal for you, if not).