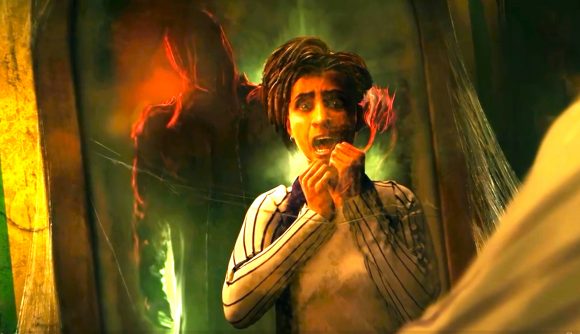 March 2, 2022 This article has been updated with quotes shared with Wargamer by artist Henning Ludvigsen.

Apart from a few spine-tingling trailers, Betrayal at House on the Hill’s third edition has been shrouded in mystery – until now. The classic haunted house game of traitors and tiles was recently teased by publisher Avalon Hill, but the trailer released showed little more than unopened doors and smokescreens. As of yesterday, though, the classic board game’s resurrection is officially available for pre-order.

According to Hasbro’s pre-order page, the new Betrayal at House on the hill features “50 chilling haunts and dozens of danger-filled rooms that will terrify even the strongest among you”, as well as five different starting scenarios for extra variety. However, the game’s well-known components have been revamped (pun intended) by artist Henning Ludvigsen, who has also worked on tabletop staples like Clue, Dungeons and Dragons, and Zombicide. The whole horrifying package will be available for $55.96 / £41.99.

“Betrayal at House on the Hill is definitely one of the absolutely coolest projects I’ve ever had the joy of working on”, Ludvigsen told Wargamer. “Betrayal at House on the Hill was always my favourite board game to play, and I couldn’t believe it when I got the offer to create the game-tiles. He adds that, in designing the new look for Betrayal, “it was important to me to take the visuals pretty far by adding tons of details, playing with lights and shadows for additional mood and atmosphere. ” “It’s a great and fun game that I think deserves all the atmosphere and love we can throw at it”, Ludvigsen says. “I’m really proud of being a part of this amazing game-world, and thinking about all the fun times it will contribute to on game nights around the world.”

Yesterday, Polygon revealed more details on the changes coming to Betrayal’s third edition. According to Polygon’s article, the game has “50 brand-new haunts, including sequels to old favourites” – hopefully this means popular scenarios like ‘The Abyss Gazes Back’ will be – well, back. Polygon also revealed the game’s character cards and sliders have been designed to “improve usability and contribute to durability”, which will be welcome news to any who (like us) can’t keep the plastic sliders from slipping off their well-loved cardboard pieces in the older copies. There’s also reportedly a new mechanic for a “reluctant traitor”. This will allow new, less confident gamers to side-step the traitor role and pass it to someone more ready to take on the rest of the team alone. 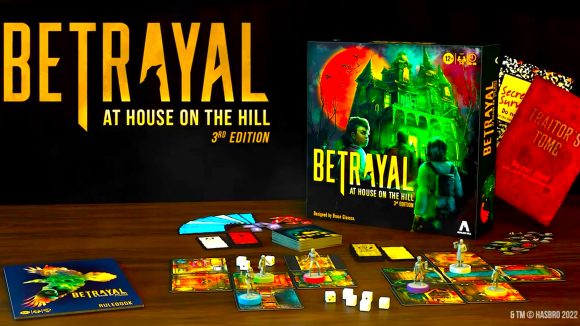 For those who may be jumping on the ghost train for the first time, Betrayal at House on the Hill is a co-op board game about exploring a haunted house created by placing random room tiles – at least, it is to begin with. You start the game as a ragtag gang of teens, placing room tiles, seeing through chilling events, and picking up definitely-cursed items.

Eventually, you’ll pick up enough bad ‘omens’ that one of you – any one of you – becomes a murderous traitor. Now it’s a social deduction game, and you’re at odds with your own friends, racing to be the last ones left alive. If you’re a fan of horror classics like The Haunting of Hill House, this is the game for you.

Let the haunt begin! #BetrayalAtHouseOnTheHill includes 50 chilling haunts and dozens of danger-filled rooms that will terrify even the strongest among you.
Available for pre-order NOW on #HasbroPulse https://t.co/dUj2nm1dxV pic.twitter.com/r4Sp4xE20T

If traitors are your favourite, you might like our guide to social deduction games. Otherwise, here’s some fun board games to give you a break from having your pants scared off.