Distant Worlds 2 is a space strategy 4X game in which you guide an alien empire from a weedy little thing struggling to get around its own solar system, to a galactic superpower with billions of citizens under its banner. On the way, you’ll perform the usual 4X rigamarole, managing your research, economy, and military as you explore, expand, and conquer your way across the stars.

The world that developer Codeforce and publisher Slitherine have provided with Distant Worlds 2 is a vast one. Your playground is a galaxy of hundreds of stars, each with their own set of planets, full of resources to exploit, bountiful worlds to colonise, and research bonuses to gobble up. Threats are plentiful, not just from competing empires, but also from space beasts, pirates, and plagues. Meanwhile, relics of some past cataclysmic event – abandoned bases, old ruins, and independent colonies to befriend or invade – litter the galaxy.

Distant Worlds 2 is a space opera on a grand scale, but just as you can zoom in seamlessly from the top level, where each star’s a pinprick, to watch a battle raging above one tiny moon, there are plentiful opportunities to dive into the nitty-gritty. It’s a complicated game, as just one screenshot betrays. There are more particulars to be grappled with than could ever be outlined in one review, from the migration policies of individual colonies, to the fuel tanks of your mining ships, to the battle tactics of your top destroyers. Lots to do then. After some 40 hours swimming in its inky depths, I find I’m still learning all the time.

I’ve never really felt lost in space, however. As I said in my Distant Worlds 2 preview, a robust tutorial system and, in particular, unbelievable automation options, make this game of tangled systems a surprisingly accessible one. You can automate almost every part of the game, offloading entire sections of gameplay to the AI. It’s not just the small stuff, either. If you want the cold hard logic of the computer to decide who you go to war with, that’s fine and dandy.

Conversely, you can be an obsessive ruler and set everything to manual control, flying every ship yourself, if you’re an actions per minute master, or you want to drive yourself bananas. The only thing you usually can’t control is the civilian economy. It’s a free cosmos (even when you’re a military dictatorship) and civilian ships do whatever they want, shuttling tourists and resources around, marching to the beat of their own drum.

The AI appears to do a pretty good job of running things when given the reins, designing spaceships that do spaceship-y things, and setting tax rates that seem reasonable. Taking back momentary control to make spot changes is usually breezy too, though sometimes the game can be a bit mean if you don’t remember to quickly switch automation off, immediately remaking ships you’ve just built, for instance.

The UI seems to have had a few choice upgrades since the preview build I played too (and it was already pretty tidy). As a result of all of this, I’ve found it pleasantly painless to follow the hustle and bustle of my growing civilisations, particularly as my experience and understanding of the game has grown.

Since gameplay can be as hands-on or hands-off as you make it, exactly how the game plays is going to be down to personal taste. I’ve enjoyed a relatively relaxed approach myself; you might be more controlling. The option to decide this for yourself, though, means Distant Worlds 2 will appeal to far more types of people than it otherwise might. There’s plenty for both the bean counters and the roleplayers to enjoy. 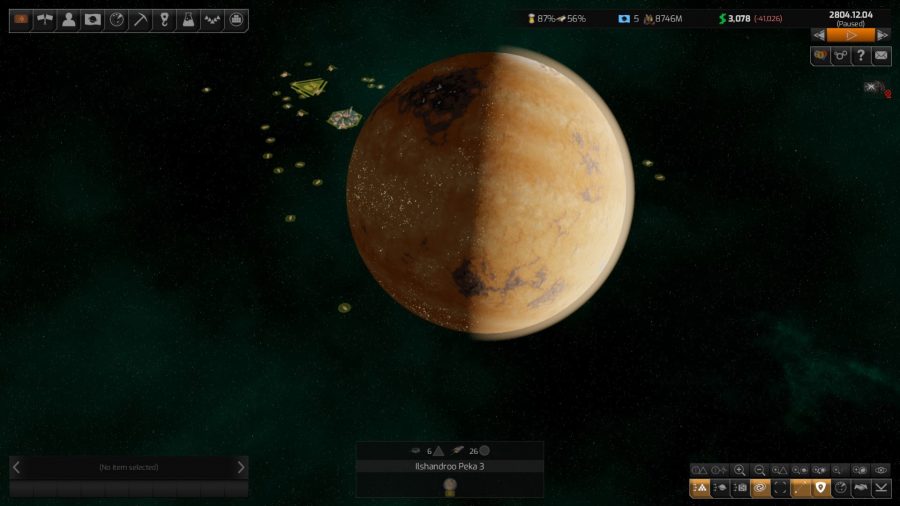 When I began my second campaign, I had some nagging concerns about replayability. There are plenty of ways to win, from having the highest population to the best economy, not to mention each race’s unique story-based objectives. However, the basic pattern of gameplay will be quite similar every time. You might have a particularly trade-heavy or particularly warlike playthrough, but you’re always going to be doing a bit of everything. You’ll always need a military, you’ll always need miners, you’ll always need to make new colonies, new research and new resort bases.

Each alien race follows the same gameplay loop, but their traits dictate strategy

The basics remain the same with the seven different alien factions too. Although each one has bonuses and weaknesses, and several unique technologies to play with, they don’t appear massively asymmetrical, at least in their mechanics.

I’m still mulling this over, but my concern here has rather evaporated with time, for two main reasons. The first is that, as I understand the game better, I realise the different species play more differently than I at first believed (at least if you want to succeed). The ratlike trader Teekans are never going to stand up to the aggressive Boskaran spiders in a fair fight, for instance. For starters, the main weapons in their spaceships face backwards. If it comes to conflict, you’ll have to be smart to find a solution. 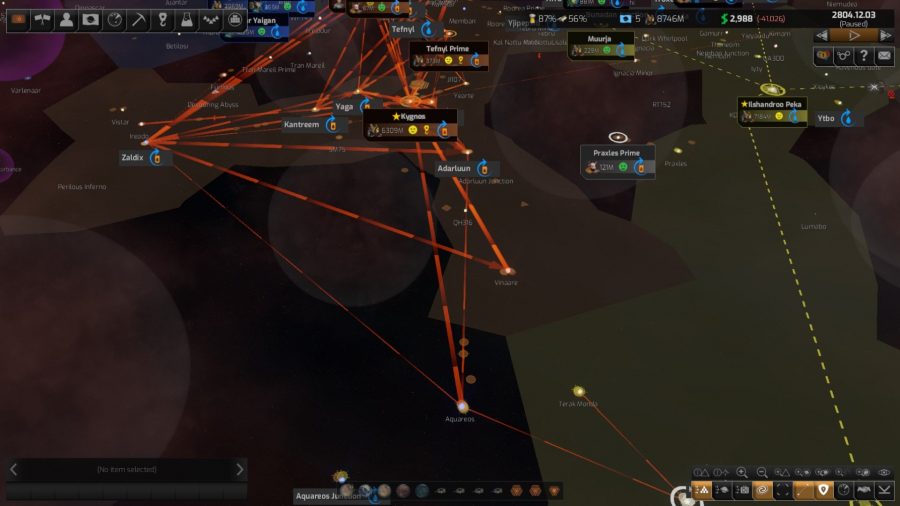 The second is that a lot of the replayability in Distant Worlds 2 comes from the powerful array of customisation options which can shape the galaxy before you get started. You can tweak all sorts of stuff. Research trees can be semi-randomized; the galaxy can be made brutal or peaceful; it can be hard or easy to explore. Your technology and the number of worlds you control from the outset can also be customised, as can those of your rivals.

You can experiment to devise your own starting scenario, in other words. In one such experiment, I grappled with instant economic ruin as my superior technology meant my ship designs far outstripped the resources on hand. In a second playthrough, the nearby stars had bountiful riches to be scooped up, while in a third I found myself horribly stretched between two spirals of the galaxy, desperately trying to upgrade my hyperdrives so I could establish any kind of foothold. Those worlds, they were just so distant.

Additionally, you won’t run through a whole playthrough in an evening. The pace of gameplay is quite slow – it takes a good few dozen hours to reach a late game. Distant Worlds 2 feels quite relaxed therefore – it’s the sort of game you unwind with for a few hours with something on in the background.

Perhaps because it’s quite slow paced, a large part of what attracts me to Distant Worlds 2 is the pure spectacle of the simulation. It’s a joy to watch. Not that it’s a beautiful game in the traditional sense. Sure, planets can be visually arresting, but overall the graphics aren’t next-level, and the galaxy map in particular is quite spartan. It’s fascinating to follow, however – to see the ships jet around under their own steam and check up on the flow of migration, trade, or tourism. It’s beautiful in the way an ant farm is beautiful. The individual parts are functional, but the whole is quite spectacular. 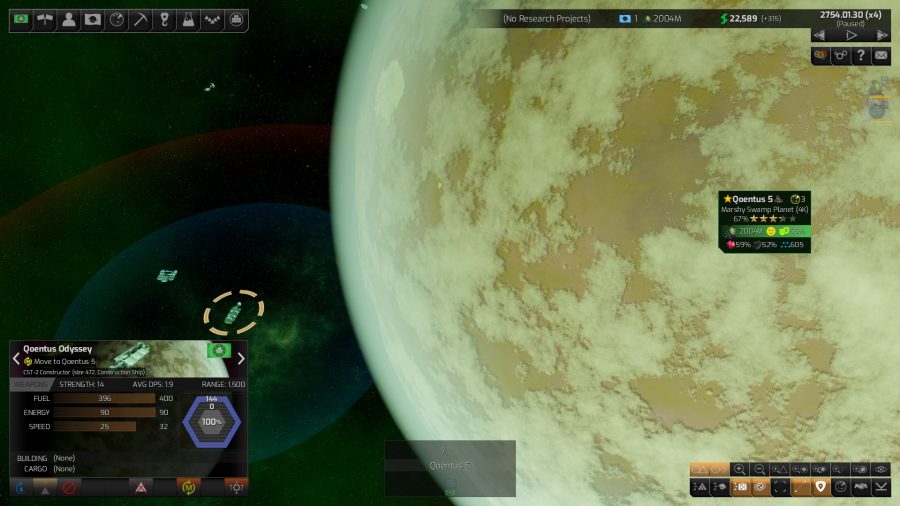 In my preview, I mentioned that running the galaxy in Distant Worlds 2 feels like guiding the growth of some strange creature. That’s partly because the civilian economy is out of your hands. As it largely determines state funds through tax and trade, you’re always trying to foster it to grow bigger and better, so that it throws you more cash.

What prevents this from feeling overly abstract and amorphous is that each of those civilian ships has a concrete task. Resources, tourists, and migrants: all must be physically taken from place to place. And everything has a physical location. You can’t build a spaceship unless your freighters truck all the right ingredients from your mining stations to a specific planet or base. To do that they’ll need fuel, transported from a gas giant mine in the next system. And so on. While it’s out of your hands, it all so feels tangible. I’m quite taken by it.

The game’s not without its share of issues. I’ve met with a couple of bugs (not the alien sort). I’ve struggled sometimes to get fleets to behave exactly how I want them to. The music is a bit naff. For the most part though, Distant Worlds 2 is excellent. It feels great to play whether you’re new or a dabhand because you can customise the complexity to your own desires. And as a simulation of a space-faring civilisation, it’s on another level.

A space simulation that's out of this world

Complex but not daunting, with loads to tinker with and plenty to explore, Distant Worlds 2 should go down a treat with strategy and sci-fi fans. Plus, it's simply a blast to watch its systems in action.