If you’ve made it to this guide, you probably enjoy a drink. But whatever the alcoholic beverage of your choice, sometimes drinking just isn’t fun enough on its own. Perhaps you’re tired of the best drinking games you can play without a board, or you’ve totally exhausted your drinking card games collection. That’s where drinking board games come in – because adding rules, stakes, and some pieces of card and plastic can often be the ingredients you need for a boozy night with friends.

There are plenty of specially designed drinking board games in this list to add to your collection. And, if you already happen to own some of the best board games out there, you’ll find plenty of ways to adapt them into drinking games in this guide. These board games work just as well when sober, so you might even find something fun to play for those nights as the designated driver.

Of course, it goes without saying that you should drink (and game) responsibly. But if you’ve got your legal ID and your red solo cup at the ready, let’s take a look at some of the best drinking board games – to Drinkopoly and beyond.

These are the best drinking board games: 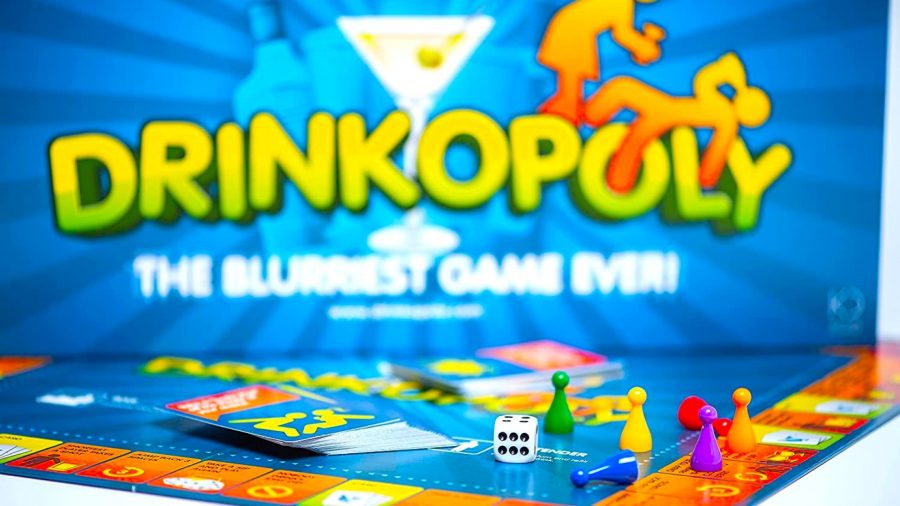 Whether the sight of the word ‘Monopoly’ makes you cheer or groan in despair, this wouldn’t be a complete list of drinking board games without an alternate edition of the world’s most famous board game. Drinkopoly calls itself ‘the blurriest game ever’, and it’s specifically designed for adult couples competing in teams.

Old school: These are the best classic board games

Drinkopoly is slightly simpler than regular Monopoly (which is handy on nights where you’re too tipsy to remember lots of rules). You take turns moving your pieces around the board, performing the (often alcoholic) actions on the space you land on. There are also plenty of cards to pick up, each with more rules or activities to follow. It’s all the fun of a drinking card game like Kings, but the board does the work of remembering what to do for you. 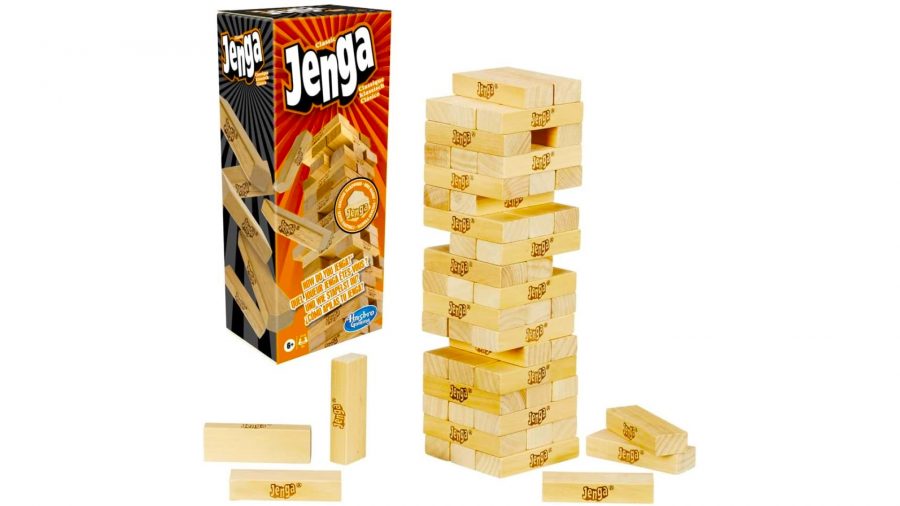 You can buy Drunk Jenga or make your own version

There are a few ways to approach the drunk version of Jenga. You could buy a specially designed Jenga tower, but these are usually regular Jenga blocks with drinking ‘rules’ printed on them. Still, if you don’t want to dedicate the time to coming up with your own drinking game, these will do the work for you nicely. The other method, of course, is to use a plain old Jenga tower for a drinking game. This time, it’s up to you to make the rules and write them on the blocks.

If you need some inspiration, you could always use the rules from some of the best drinking games that already exist. A King’s Cup version of Drunk Jenga would have blocks saying ‘waterfall’ (everyone drinks until the player on their left stops), while other blocks might show a certain number of sips to take or command everyone of a specific gender to drink. You can get as creative as you want, but this is an easy starting point. 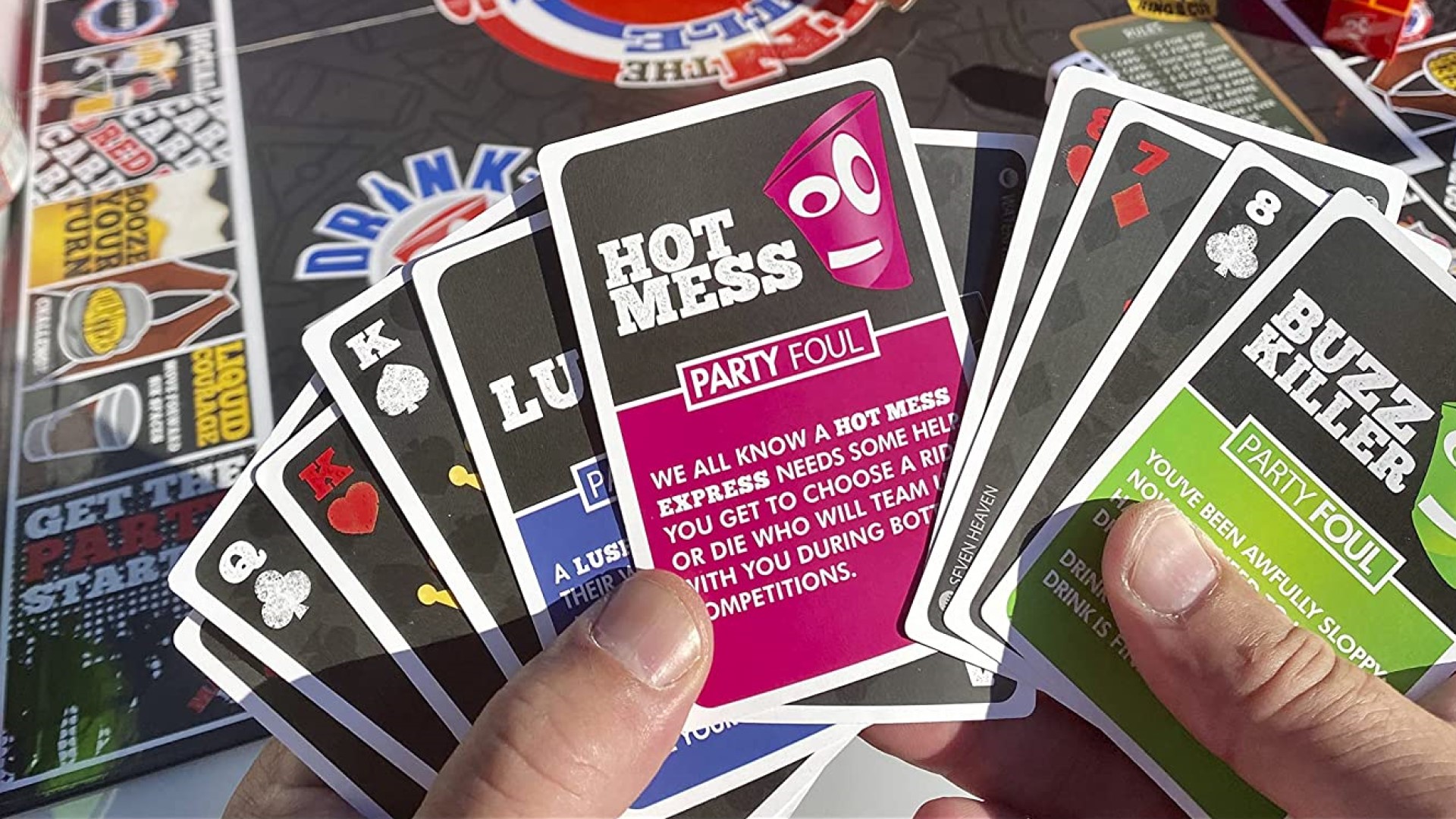 When your group can’t agree on what to play, Drink-A-Palooza is there to say ‘yes’ to everyone. An all-in-one drinking game kit, in Drink-A-Palooza players progress around a Monopoly-style board, playing different games based on where they land. You earn miniature beer bottles for each victory, and the first to fill their ‘six pack’ wins.

As for the games themselves, Drink-A-Palooza might not be breaking new ground, but it has all your old favourites. From King’s Cup (Ring of Fire) to Screw the Dealer, Quarters to Flip Cup, pretty much every drinking game you encountered at university is represented here.

Total recall: These are the very best memory games out there

The only downside is that the cups you need for a couple of the rounds aren’t included.

Other than that, this is the perfect facilitator for a night of drinking games, preventing any of them from getting stale too quickly. It’s a great solution to an age-old problem which can kill an evening before it truly gets going: choice. 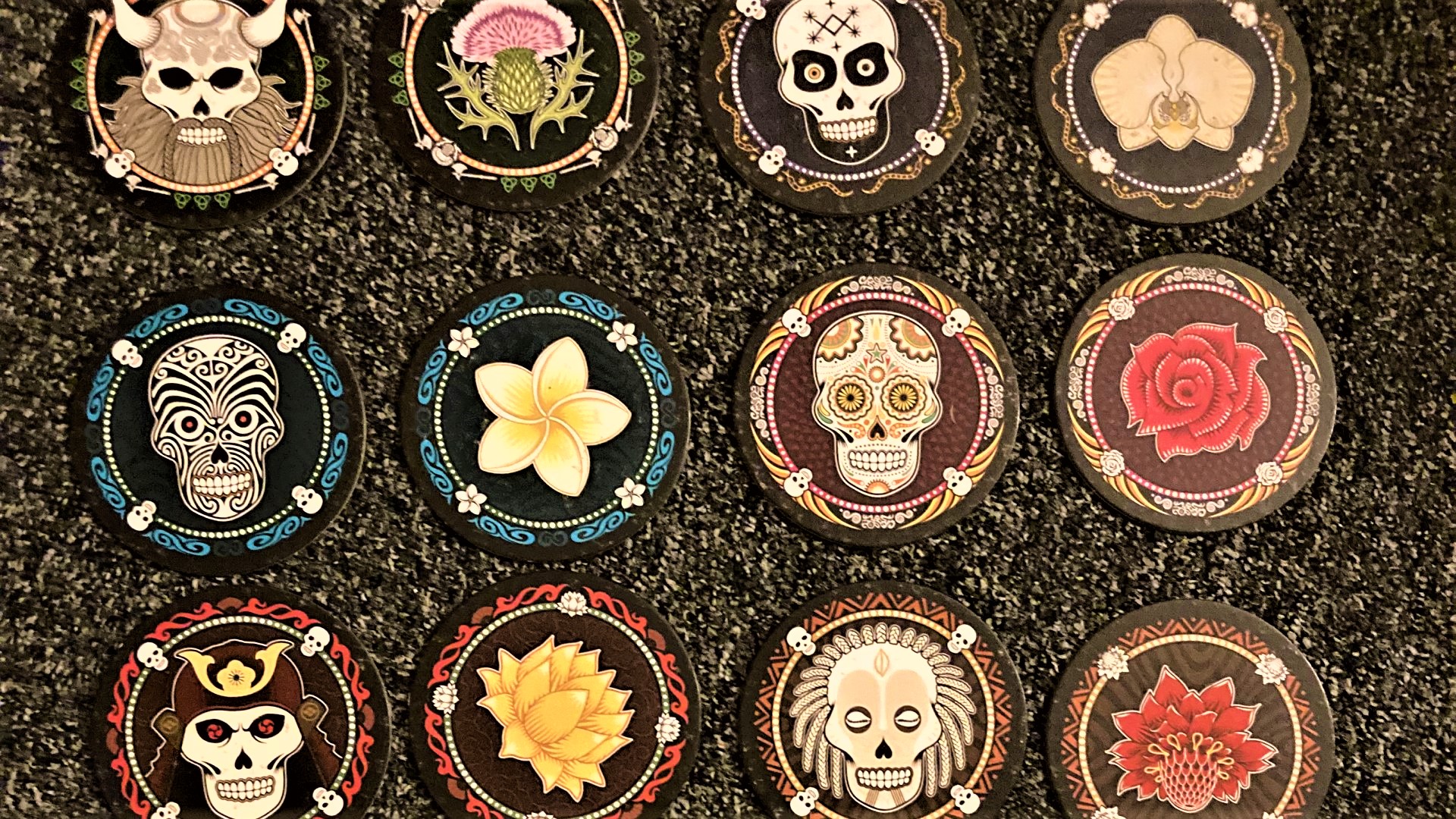 This bluffing game was originally played using beer mats, or so the story goes, so perhaps it’s no coincidence that Skull makes for the perfect pub play experience.

Skull is simple, but try it and you’ll find subtle brilliance here

It helps that it’s super easy to learn, and to teach. Players each have a set of four cards: one skull and three flowers. They take it in turns to place one of their cards face down in front of them, and, at any point, someone can start bidding, stating the number of flowers they think they can find before they uncover a skull. Whoever wins the bid must then prove they can cash the cheque their mouth has written, beginning with their own cards. Succeed and you’re halfway to winning; fail and you lose a card permanently. And that’s basically all there is to it. It’s so straightforward that, at first, it can be hard to see the game in Skull at all, but give it a try and you’ll discover it’s subtly brilliant, full of canny bluffing and tense risk-taking.

It only gets better with a little Dutch courage, as players proceed to get drunker and their swaggering bravado increases. It’s also child’s play to turn Skull into a drinking game (though children, obviously, should not). Simply drink whenever you hit a Skull, and make everyone else drink when you successfully complete a round. 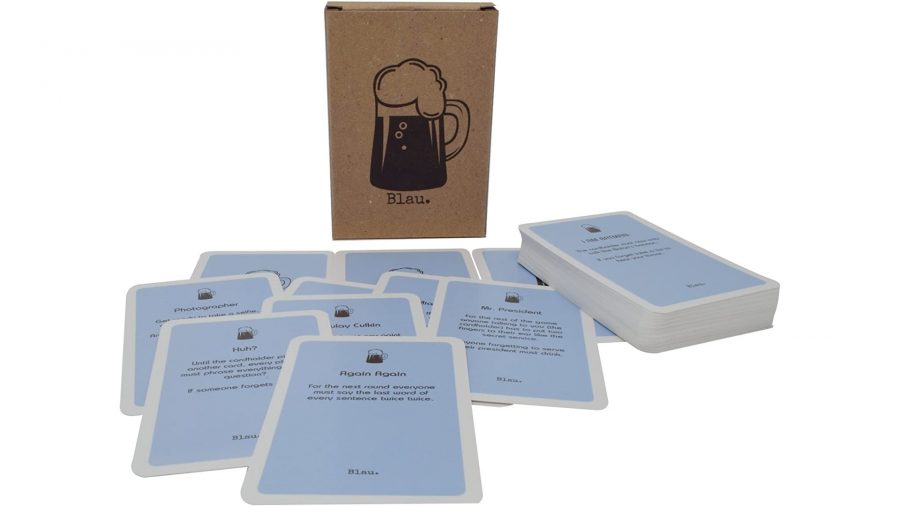 Drinking games are often funny (or at least many make that claim) but often they lean too heavily on shock value. Few are as packed with actual hilarity as Blau.

The concept is extremely straightforward: each card in this game’s 60-card deck contains a unique task or ruling which determines who has to drink. Some of these are one-time actions: “Prepare to take a selfie, count down from three, whoever isn’t in the picture must drink.” Whereas others persist for a whole round and drinking is the penalty for forgetting: “Everyone must repeat the last word of every sentence twice twice.” All of them are unique, creative, and designed to produce silly situations.

Blau. is the perfect icebreaker game. Hot tip – it’s best experienced gradually, uncovering a new card every so often while you chat. That way the rules stick around for far longer, and you don’t blast through the deck too fast. 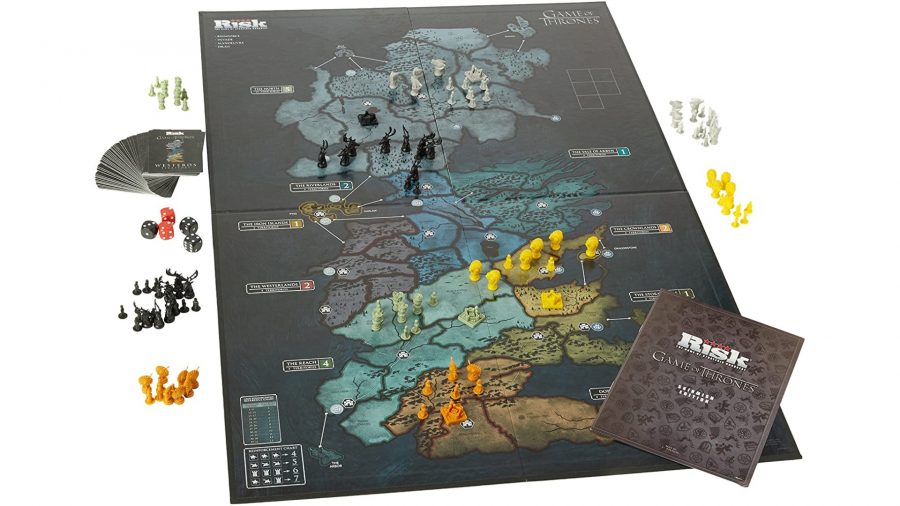 It turns out a strategy board game can actually be just the thing to play when drinking. It just has to be simple, universally known, and not so expensive that you’re scared to bring it out when there’s an increased risk of spillage at the table.

Risk is the answer on all counts. Do your best incompetent, drunken general impression as you nudge little plastic troops towards one another, get increasingly frustrated at dice rolls, and openly plot against your friends.

Take it seriously: These are the best board games for adults

The Game of Thrones edition of Risk is particularly good for the purpose – based on the ill-fated HBO series, it gives the opportunity to invent your own ending. As well as lovely pieces sporting the symbols of five of the setting’s factions, this variant features ports, which open up the map, preventing bottlenecks and turtling.

We recommend the Skirmish edition, which sticks fairly close to the gameplay of the original. The Deluxe version adds castles, currency, and character cards, but that’ll seem far too much of a hassle after your second or third pint. 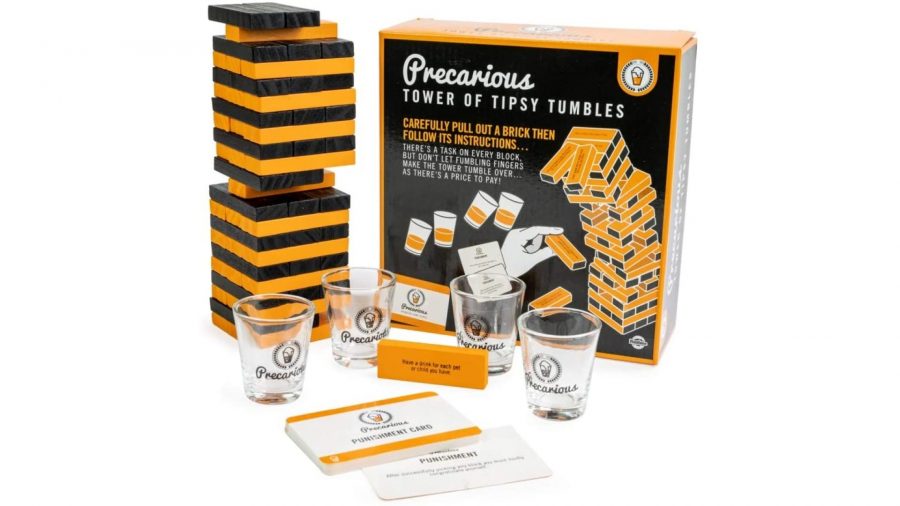 The creators of Precarious have found a clever way to add some additional excitement to a classic drinking game archetype – replacing the cards dictating who must drink with a teetering tower of terror.

Players can either accept a humiliating forfeit card or attempt to slide a block from the tower and place it on top. These blocks each have an instruction on them, designed to get everyone downing their drinks. You also get four shot glasses in the box, so that’s a nice little bonus.

Regular Jenga’s pretty tricky when you’re stone-cold sober, so it’s not likely to be long before someone sends the blocks crashing down. Better hope it’s not you, though – there’s a price to pay for toppling the Precarious tower. 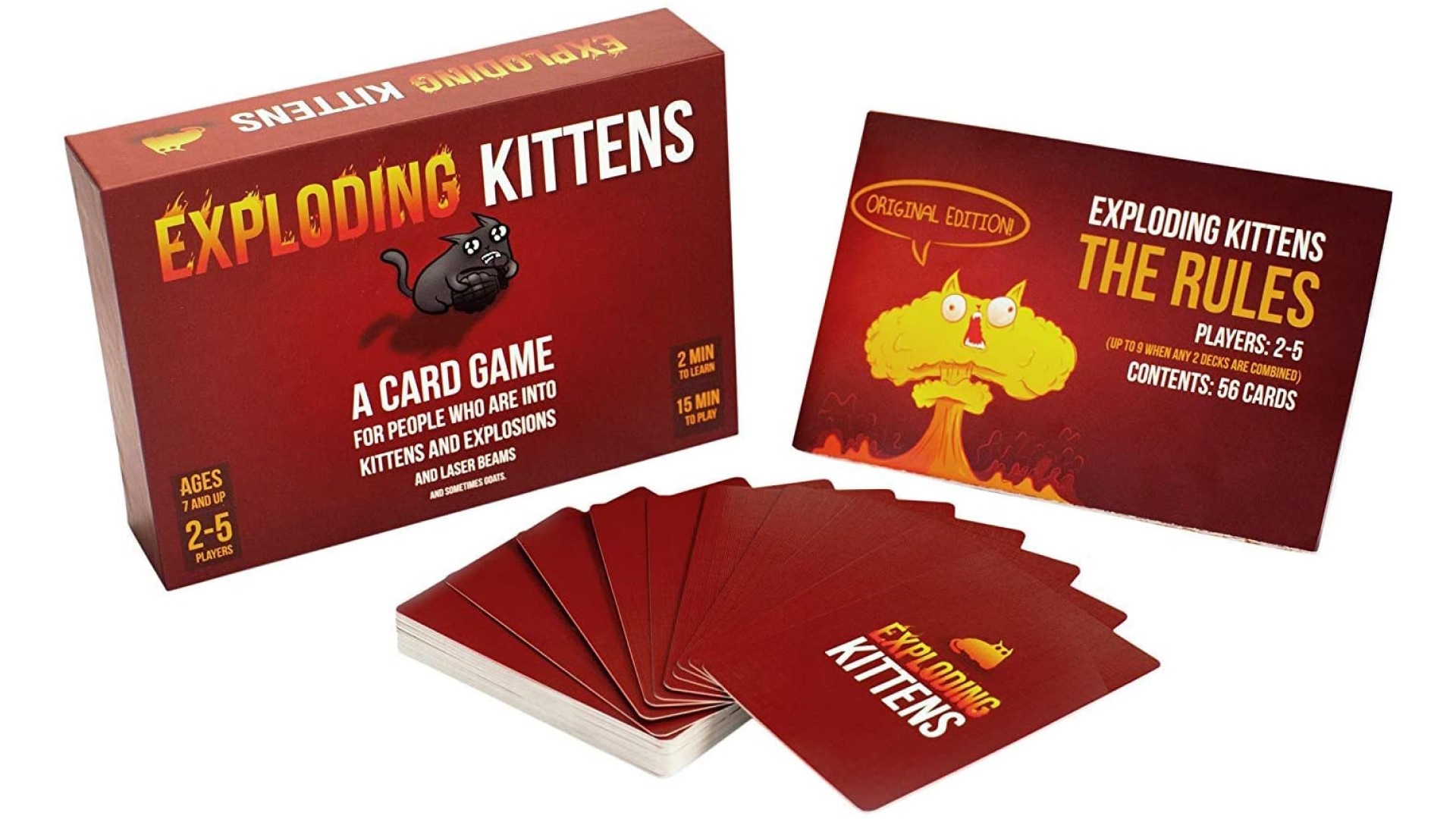 A light party game that mixes well with alcohol, Exploding Kittens is a variant of Russian roulette with fire-breathing felines.

Players each take turns drawing a single card from the central deck. If they uncover one of the titular exploding kittens they are out (and must drink, if you’re playing with drinking game rules).

Quick draw: These are the best free card games

However, there are plenty of ways to dodge a demise caused by combustible cat – such as the potent Defuse cards, which let you slip Exploding Kittens back into the deck anywhere you choose. Other special cards let players glimpse what’s coming up in the deck, skip their turn, force other players to draw multiple times, and all sorts of other shenanigans.

Exploding Kittens is great fun and super simple. The rules are all explained on the cards so, as long as you can see straight, you can’t go wrong. If that’s no longer the case, it’s probably high time you turned in for the night anyway. Wargamer says: please drink (and game) responsibly.