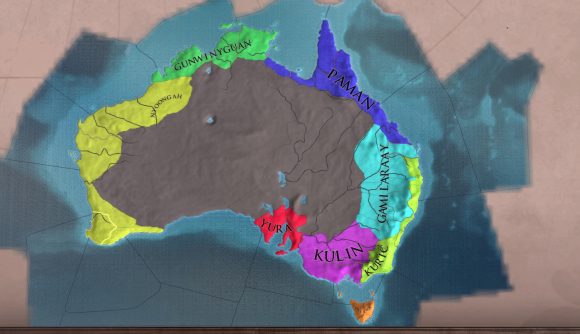 Europa Universalis 4 is giving Australia a rework. Revealed in a dev diary posted to the Paradox Forum earlier today, changes are being made to the Aboriginal peoples represented in-game, to give them their own tech trees, religion, and units – with thought given to their distinct cultures and histories. New provinces have also been added to the Australian continent. It has not yet been revealed when the rework will go live.

Playable Aboriginal nations are being added to the continent, including the Eora people, who were the first inhabitants of the Sydney area, the Palawa people of Tasmania, the Kaurna people, who originally inhabited the area surrounding Adelaide, the Gamilaraay, whose lands extended across modern-day New South Wales and Queensland, and the northern Larrakia people.

Aboriginal Australians will have new unit models, as well as a separate tech group and their own unit tree, progressing from the pre-colonial Australian era through to the post-British invasion. They will also have access to the new Alcheringa religion, through which they can unlock ‘Dreaming Stories’ by completing missions. These vary in their requirements, from defeating enemies, to building naval vessels, to dominating sea trade.

The dev diary notes that religious beliefs across Aboriginal Australians were vast and diverse, although most shared a concept of “The Dreaming”. It’s difficult to point to a direct Western counterpart of this concept, but it broadly can broadly be thought of as an origins story, and the time when Ancestral Spirits created life and the world’s form. 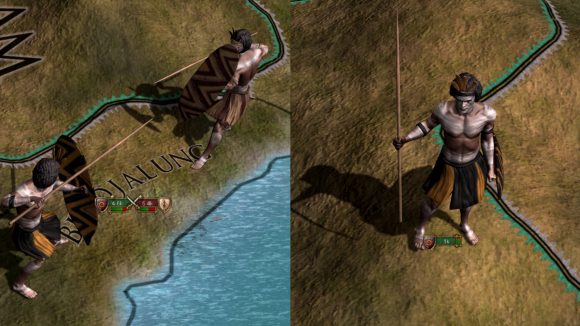 New missions also reward the Australians and Indonesians for contacting one another and trading.

Additional provinces have been introduced to the land down under, too, particularly in Western Australia, so all Colonial territories may be connected by land. The dev diary says these have been introduced in the hope that the continent takes on a similar province count and strategic importance to other colonial regions in the game. Tweaks have also been made to the chance of finding the valuable resources of gold and gems, simulating the early 19th Century Australian Gold Rush. 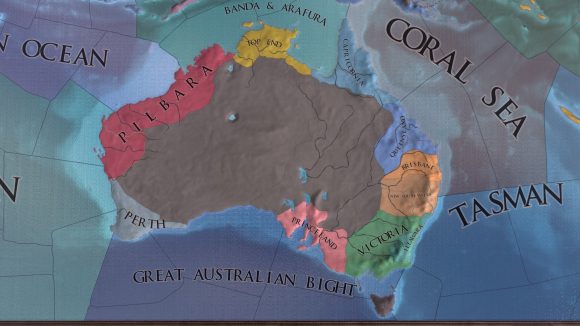 Paradox Forum user Meka66, listed as a content designer on Hearts of Iron 4, who posted the dev diary, said the changes had been made to provide additional content to the continent and more accurately depict its Aboriginal population.

“The continent being an entirely uncolonized block of nothing before colonialism seems a little inaccurate,” Mako66 said, “given how lively the continent actually was before the Europeans arrived”.

Responding to a comment on the forum thread, Meka66 said his original designs for the reworked Australia were rejected for having way too many provinces, and they felt a focus on the Australian coastlines better aligned with the game’s requirements.

“While central Australia was very important for the Aboriginals, it was not important for the colonizers, and we wanted to strike a nice balance with the two perspectives players will approach it from, so focusing mainly on the Australian coastline felt much more fitting for EU4.”